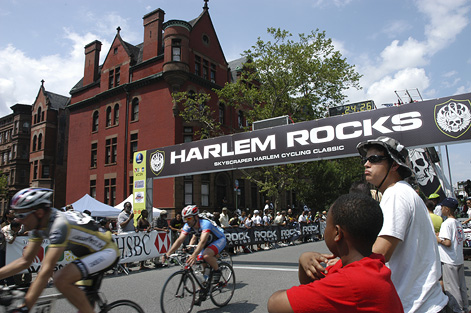 Father’s Day, June 18, saw the 35th running of the Skyscraper Harlem
Classic criterium in the fabled uptown Manhattan neighborhood.
Beginning with kids races and some family fun, the day really started
to roll as amateurs, women, and ultimately the professional men’s
peloton took to the four-corner course around Marcus Garvey Park.
While a morning rain provided for slick turns and plenty of crashes
in the amateur races (locals don’t call it the “skinscraper” for
nothing), the skies cleared and the sun dried the course for the pro
men to take on 55 laps of criterium madness.

This year’s race enjoyed a shot of adrenaline provided by the Rock
Racing team and its owner Michael Ball. With television coverage
provided by WCSN and New York race promoter John Eustice at the helm,
this year’s edition drew some big names including “Fast Freddy”
Rodriguez, Tyler Hamilton and Rahsaan Bahati from Rock Racing, Ivan
Dominguez and Jose Manual Garcia from Toyota-United Pro, and a solid
field of speedsters from local and regional teams.

“I truly believe this race is a diamond in the rough,” Ball told me
before the start, buzzing with excitement. “This is a great event and
I want to turn it into something really special.”

In fact, Ball says he wants to develop a larger series in New York,
possibly with a race in each of the city’s five boroughs. Big-time
professional racing doesn’t come to NYC as often as it should, but
when it does the riders always seem to enjoy it.

“New York is an awesome city and racing in New York is my kind of
style,” Rodriguez commented. For teammate Hamilton, who came at the
last minute at Ball’s request, the excitement of New York was enough
to push through the fatigue of a heavy spring racing schedule.
“Michael asked me if I would come and I thought why not?” he said.
“He’s done a lot for me so I’m happy to be here for him.”

As the men wound themselves around the park, New York’s local racers
didn’t disappoint, mixing it with the bigger pro teams. Rock Racing
also delivered on their promise to put on a good show, taking the
reins with ten laps to go and lining out the team in the hopes of a
leadout for Bahati. Things were going according to plan until
Dominguez and Toyota teammate Garcia swarmed the leadout train and
left Bahati scrambling for new wheels. Meanwhile, it was young
sprinter Eric Barlevav from Time Pro Cycling who provided the
ultimate spoiler, pipping Bahati for the win with bike throw so
dramatic that Barlevav took himself out and slide 40 feet down the
pavement after crossing the line.

Amazingly enough nobody else crashed as a result and as the winner
tried to process the pain and figure out what the heck happened, race
announcers confirmed that he had snatched victory from the Rock
Racing crew. A cringe became a smile and Barlevav peeled himself off
the pavement, collected his flowers, and took the traditional Harlem
victory lap on a borrowed bike. “I feel pretty good!” he told the
race announcers when they asked for a damage report.

Time teammate and final leadout man Adam Myerson told me after the
race that he had to abort his own victory salute from 10 riders back
as he realized Barlevav was hitting the deck. “It would have been
better if he didn’t crash,” Myserson laughed, but a win is a win.

As for Bahati, who tired to put the Rock Racing stamp on the event,
he cheerfully claimed credit for the victor’s untimely tumble. “I was
pissed! I put my voodoo on him!” Bahati joked on the podium.

With a new look and a fresh enthusiasm, the Harlem Skyscraper looks
set to rock and roll on with even more in store for 2009.