He Came From Outer Mongolia

Barcelona, 1992. It was to be the last of the ‘true’ idealistic Olympic games. The Berlin Wall had fallen, and communism had faded into socialism, and the great sporting divide between amateur and professional was also about to fall to one side.

For many years, the mighty eastern block riders had been totally dominant in the amateur ranks, practically unbeatable. Due to the constraints of communism, they had never been allowed to race as, or with, the professionals. Now they were slowly being allowed by their liberally evolving governments to take up professional contracts-usually with great proportions of their salary going back to the state. This was to be the last Olympics for both the true and the full-time eastern block ‘amateurs.’ It was also the last in which minority nations such as Mongolia were automatically granted starting grid slots. These days, it comes largely down to UCI points gained, hardly the Olympic ideal.

Heading into the final ten kilometers of the men’s road race, a trio of riders had clipped off the front to clean up the podium. The late Fabio Casatelli was destined to take the gold medal from Erik Dekker, and was to take up the offer of a pro contract with Motorola. Behind them were the remnants of the eastern block riders who would later turn professional, too (like Erik Zabel). Back in 14th slot was a certain Lance Armstrong, who was also later to take up a pro contract with the same Motorola team. And as they say the rest is history.

But, if it hadn’t been for one rider choosing to ride the wrong way down the course, after retiring from the race, cycling history may have been a little bit different. Just behind the leading three was a small group of about five riders who were set to clean up the rest of the placings. In this group was a lone Mongolian rider: Jamsran Ulzii-Orshikh, better known as Oggi. The retired Filipino rider riding in the opposite direction crashed into the group, flooring Oggi, and leaving him to finish in the 79th spot, a tragic twist of fate for the 24-year-old.

IT’S COLD (AND HOT) IN MONGOLIA

Mongolia is one of the most extreme and far-flung places you can imagine, and certainly not the kind of place you expect to produce a world-class bike racer, as Oggi explains. ‘Terrible roads, bad traffic manners, terrible weather (temperatures from minus 40 to plus 110 degrees), and you can only ride outside between April and October. But mountain biking is possible here.’ During the extended winter months, the local riders train on rollers; Oggi trains for six hours at a time on rollers, even eight hours some days, as do some of the talented young riders he now looks after in his role with the National Cycling Federation.

The nation was once known for its conquering warrior emperors such as Genghis and Kubla Khan, and is still very much an expansive socialist state of grasslands and nomadic horsemen. Back in the Soviet era, Mongolia was considered a satellite state. ‘We were closely linked to Russia, not China,’ Oggi says. ‘In those days, many Mongolians went to Russia to study cycling, and many Russian coaches came to work here. We had a lot of riders then, but the standard was not so high.’

Television and media was not as free back then as it is these days. But events such as the Olympics did make the small screen in Mongolia. ‘It was in 1980 that I first saw cycling on TV, the Olympic games. It was then that I decided to become a cyclist. I went to the cycling school, but they rejected me. It took three years until they accepted me. I was then 17, and became national junior champion. The following year I joined the national team and became senior champion.’

The international amateur scene was tough back then, and Oggi’s and the national team’s program consisted of events such as the Peace Race, which was then considered the Tour de France for amateurs, and he finished 56th in his first appearance at the tender age of 18.

As things opened up some more, he was allowed to spend a little time racing in Italy during 1991, and he impressed enough to be offered a contract with the leading Gatorade team of Gianni Bugno. ‘My ambition was always to attend the Tour de France. But being as I was unable to start the Tour or the Giro, I see it pointless to reflect now. I am just a small Mongolian rider. Maybe the Mongolian factor was the interesting thing for them.’ The truth is that he was unable to take up the offer, as the state kept control of his passport.

Despite the frustration of the Olympics, the following year also opened up new opportunities for Oggi. But an early season car accident saw his training partner and best friend die in his arms, and left him confined to a hospital for many months.

As he slowly fought back to full strength, he took up the opportunity to study in Russia; ‘After the 1992 Olympics, I went to Kiev to study at Kiev University of Physical Culture. But instead of studying I was mostly racing.’ With his racing fairly confined to Asia, Oggi set about making his own way. ‘There has been no assistance from the state or anywhere like that. Only a few good friends and supporters have helped me to keep racing over the years.’ The race scene in Asia has developed dramatically over the past ten years, and standards of races and riders are now very high, with many European, U.S., and Australian continental and national teams racing part of their seasons on Eastern soil. This, along with the easing of restrictions, allowed Oggi to travel the world and race with the continental Trek-Marco Polo team.

You only need to mention the name Oggi to an Asian cyclist or anyone who has raced in the region, and you’ll get a huge and respectful grin. As former teammate and Manager Remko Kramer explains, ‘Oggi has a heart of gold and is so friendly to everyone. But on the bike he is as hard as nails, and very smart. I have never known anybody able to suffer like him.’ His guts and experience are truly admirable. ‘In one race in Japan, he was with two Japanese riders; one was a great sprinter. They were both watching him-he had no chance. Into the last kilometer, they looked forward. Oggi hurls his bottle at a metal signboard; they both look to see what happened, and he jumped on the opposite side and won the stage.’

A harsh climate and conditions makes for tough cookies when it comes to Mongolian cyclists, as Oggi demonstrated a few years back in the Sea Otter Classic. He came from minus 40 degrees with no outside training. A TV car crashed him in the time trial. He was coughing blood going into the final hilly road stage, and then his gear shifter broke. The climb saw the other riders on 39×23. He only had the big ring and still made the second group.

In his seven years with Marco Polo, Oggi raced and won all over the world, often alongside the big hitters in races like Tour de Langkawi and the Tour of Qatar. ‘For some reason, I always found racing in the U.S. difficult. Maybe it was the time of year. In Europe, okay, but I’m just a Mongolian rider-there are no special discounts.’

In 2007, he was still winning, but fate had another twist, and at the age of 41 his international racing career was cut short. ‘I was diagnosed with bone cancer, a result of a race crash in 2003 during the Tour of Chong Ming, China. My general condition got worse, and in late 2008 I went to South Korea for treatment and surgery. My big fan and friend Kim Dong Hwan arranged things and supported me in Korea. During that time, only a few true good friends were left with me, and they supported me throughout the difficult time. I hope that now I will live for another 50 years!’

For now, Oggi is training and racing some at home, and is looking after the development of the national team. ‘We have fewer riders than in the communist days, but the standard is higher. Unfortunately, visa scams to get people out of Mongolia to work caused problems with our cyclists traveling abroad to race. But now they are able to travel again. I think the lifestyle in Mongolia makes for very tough bike riders, so given time, maybe we will see a Mongolian professional in Europe.’ 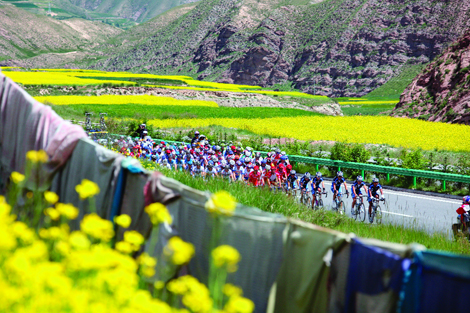 Many of Oggi’s recent and most successful racing years were spent with the Dutch-based and Chinese-registered Trek Marco Polo continental team. For many years, the team has been a huge force in bringing both Oggi and Asian racing to the forefront, by fusing it sweetly with European and worldwide racing schedules and an unlikely yet effective mix of Asian and Western riders.

Three of the four were racing on separate teams in Redlands one year, and mused about how there were some great races, and potentially great riders, in exotic and far-flung corners of the world, well off the harshly beaten map of the cycling world. Thus, they combined to form the Marco Polo team, boldly going where other Western racers had not gone before.

Over the years the team grew and began mixing promising Asian riders with more experienced Western racers. This gave exposure and experience to these riders, with Fuyi Li’s signing for the DISCO team being the pinnacle of their Asian development quest. Even racers like Maarten Tjallingii (Rabobank) came in partly through racing with Marco Polo in Asia. And the team now also boasts Leon Van Bon on its roster. 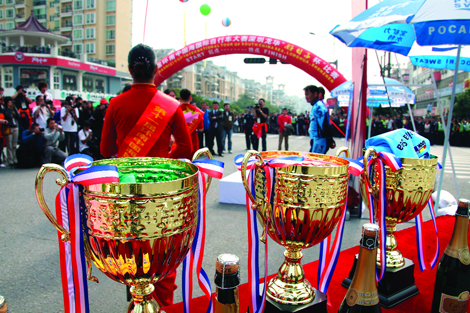 Story and photos by Steve Thomas