Synonymous with the town that started it all

Thanks to a history of cutting-edge designs inspired by company founder Steve Hed, HED Cycling’s “Made in America” ethos continues to position this Midwestern brand at the forefront of modern wheel design. World-class athletes like Chloe Dygert (track), four-time Ironman world champion Lionel Sanders and Belgian Waffle Ride Kansas winner Tanner Ward led the way for HED’s product development in their respective disciplines. While HED has made a name for itself with proven results throughout its history, enthusiasts like us are on the receiving end of trickle-down tech that benefits the majority of riders.

No different than with their Tour de France-winning road wheels, HED developed their carbon gravel line to survive the varying demands of the sport without compromising performance. The result was a 1400-gram wheelset that was released originally under the Eroica Carbon name in early 2020. Following a quick name change to honor the starting town of the 200-mile Unbound Gravel race, the Emporia GC3 Pro was officially unveiled. However, while we were traipsing through the Unbound expo in 2021, something caught our eye on display in the HED booth. It was a sample of an unmarked build that looked like any other high-end carbon wheelset. It had much of the same rim design as the Pro model but differed by using forged alloy hub shells.

A few months later HED finally launched those wheels, and they turned out to be an entry-level wheelset that joined the existing Emporia series as the GC3 Performance. Just like the Pros, these, too, are made in America and have a 30mm-deep carbon rim with a 26mm internal rim width and a 31mm external width. HED says each rim weighs 405 grams and are intended for 32–55mm tires.

The 26mm internal rim width is becoming increasingly common, especially because the design encourages running lower tire pressure to increase performance on rough gravel. Most encouraging is the recommended tire-pressure sticker on the rim that reminds riders the max pressure on any 40mm tire, for example, is 45 psi. It’s refreshing to see wheel manufacturers taking the lead in educating consumers about the differences in gravel and road technology. 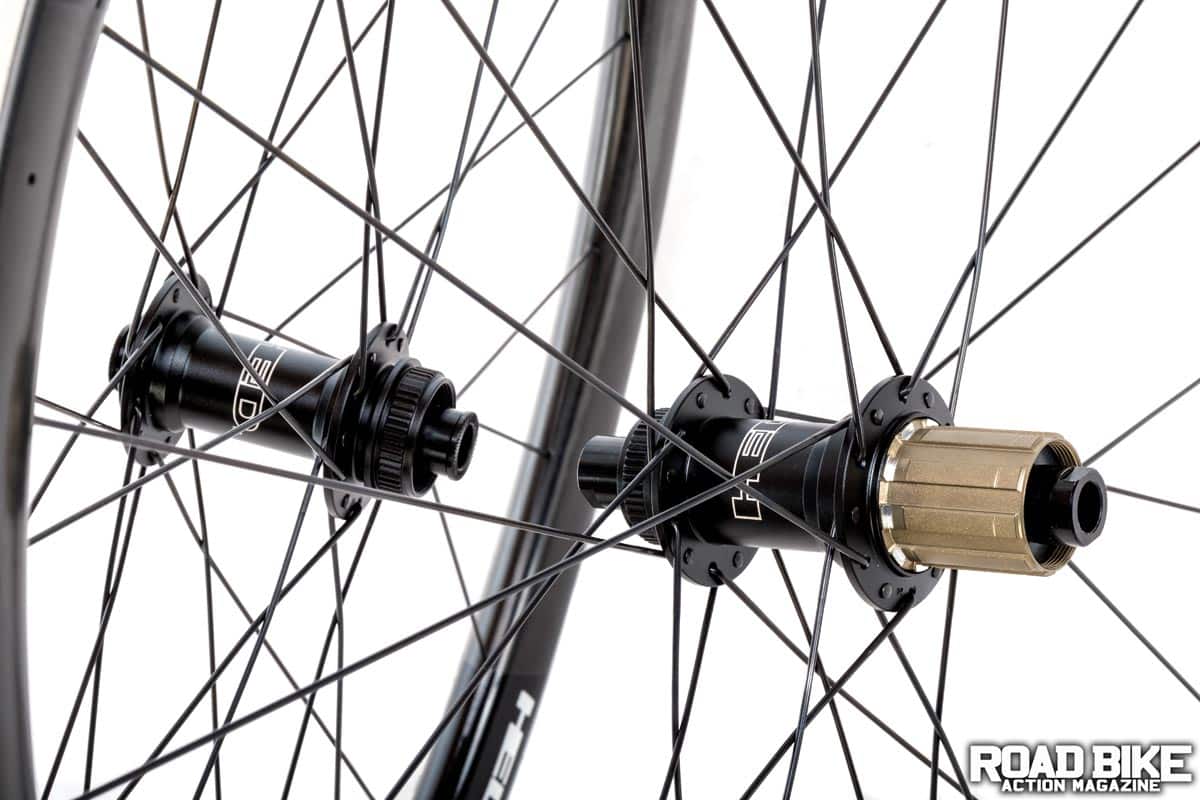 The 24 double-butted Sapim Race spokes are laced to forged alloy hubs. This is where the Performance design deviates from the Pro build. The Pros use stiffer, lighter-weight Sapim Laser spokes and HED’s Sonic 545 hub. HED’s alloy Performance hubs are built around a freehub that uses a four-pawl design with a 27-tooth ratchet and 13.3 degrees of engagement.

Weight-wise, the GC3 Performance wheelset hit the scales at 1592 grams (723 grams in the front, 869 grams in the rear) with tape and valves installed, which is about 300 grams heavier than the higher-end Pro hoops. When compared similarly spec’d wheels from brands like Hunt and Zipp, the GC3s do stand out. Zipp’s 101 XPLR runs $1800 and weighs nearly 100 grams more than the HEDs. Hunt’s 42 Limitless Gravel wheelset are marked at $1829 with a 1589-gram weight. These compete wheels highlight the GC3’s $1650 price point. However, price-conscious consumers may be swayed by Hunt’s multitude of sub-$1000 carbon hoops or Zipp’s 303S wheelset.

Setup was simple with the tubeless-ready hoops. Our American Classic tires slipped on and beaded with just the air of a floor pump. This indicates smart design from the engineers at HED and is a feature that is becoming increasingly more common with gravel wheels across the industry.

We tested the GC3s across a wide amount of gravel—from maintained rolling county roads and groomed double-track to bumpy, open-grazing pastures and chunky singletrack. The GC3s withstood it all. They proved to be durable after a handful of rim shots off hidden rocks on group rides. This is an especially notable quality for the simple fact that mid-level carbon wheels can be a bit lean in terms of rim construction.

Following a demanding ride with multiple hub-deep water crossings, we noticed the front wheel bearings developed increased resistance, with further inspection revealing a sealed bearing that was beginning to seize. This would likely happen to most wheels given the amount of exposure to water and grime we encountered, which can be attributed to user error more so than a flawed design. Our advice is to unseize, clean and grease your bearings any time they’re exposed to copious amounts of water.

The ride quality was noticeably compliant as well. This gave the wheels a more planted feeling over the alloy hoops we swapped them out with. We’d expect most riders to use the GC3s to make the same alloy to carbon conversion as we did. Those that do will also notice the forgiving characteristics of the rim and the hooked Sapim spokes. This creates a more planted feeling in all conditions, but sticks out the most while cornering and descending at higher speeds.

HED’s carbon wheels have long been available only at the highest levels, but the GC3 Performance wheelset bridges the gap between the brand’s entry-level alloy and pricier carbon price points. Those interested in gaining a competitive edge may still opt for the GC3 Pros at $2400 per set, but many others may prefer putting the $750 of savings into further bike upgrades and choosing the GC3 Performance option.

We’re on board with HED’s design of the GC3, and the subtle gloss black aesthetic gives the wheels a premium touch. The wide rims, high-engagement hub and overall durability of the build provide many of the qualities we seek when looking for a carbon gravel wheelset. Plus, consumers can rest easy with HED’s crash-replacement discount and the assurance of knowing the wheels are made in America.

A gateway to HED carbon performance