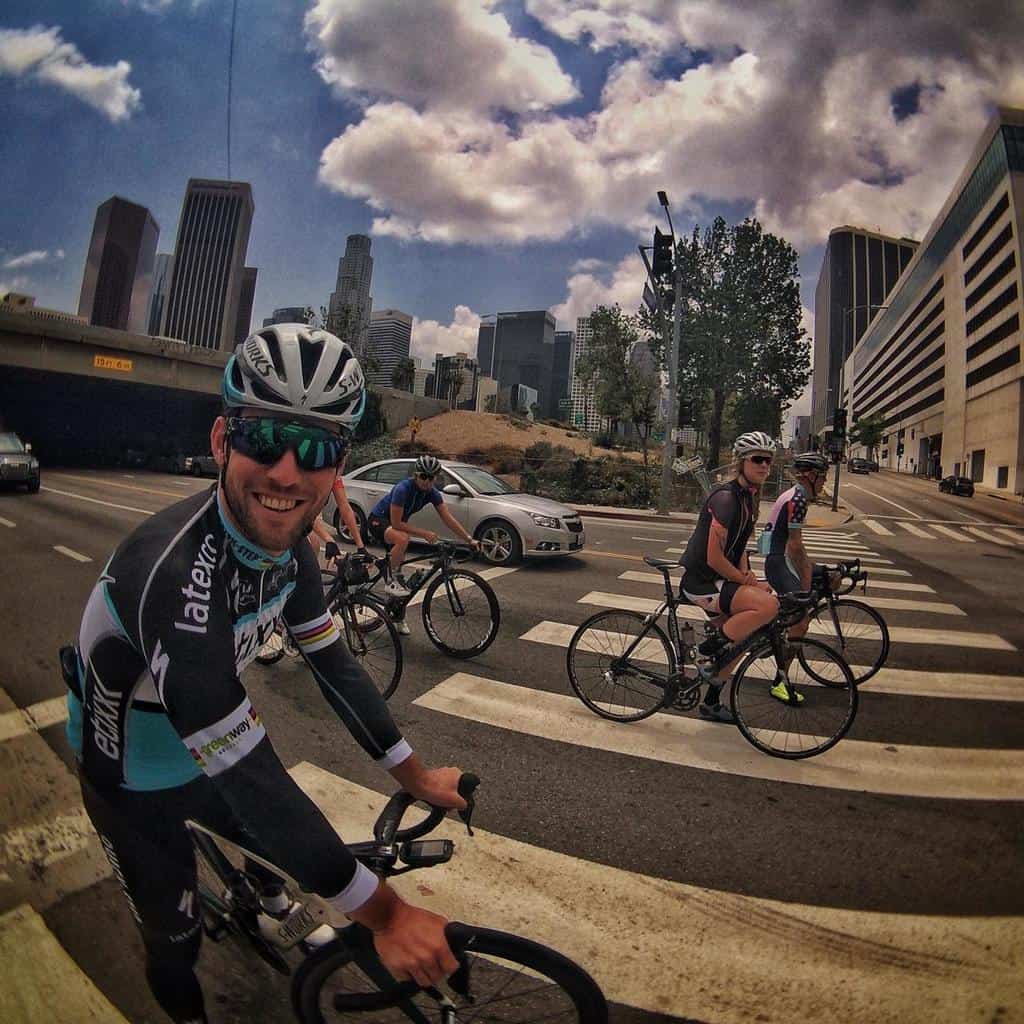 Talk about having the good fortune of being in the right place at the right time. Not five hours after Etixx Quick-Step rider Mark Cavendish swept his Specialized Venge across the finish line for his third win of the Amgen Tour of California, I was getting a call from Steve Blick from Oakley inviting me on a next-day recovery ride with the Manx Missile himself.

The “twofer” plan was to spend a couple hours on the bike shaking the legs out before he boarded a plane to head home and to also get in some Hollywood sightseeing. Steve knew that I grew up in Hollywood and figured I could help them navigate the roads of Silver Lake and Griffith Park. Did I even have to bother to reply to the invite!?

So, an hour after I watched the Garmin-Cannondale team ride off from the Rose Bowl on their own recovery ride, I headed to the Ace Hotel in downtown LA to hitch myself onto the opportunity of a lifetime.

At the appointed hour Cav walked out ready to ride and we were joined by a trio of FoS (Friends of Steve). Before we got started Steve needed to stash the “bottle” of  wine that Cavendish  received for winning Stage 2 into Lodi (which Mark had gifted to Steve) and get some air in his tires – Mark was riding the same Specialized Venge that he’d ridden to victory the day before (his number plate was still attached).

Speaking of bottles, while admittedly the ride was going to be on the short side, I noticed that Mark’s bike was running sans any water bottle. I asked Blick about that and he said Cav “just likes to train old-school style, he never drinks water.”

After a quick pit stop at Golden Saddle Cyclery to pick-up some more FoS, we climbed up a deserted road into the Griffith Park hills that circled high above the old Los Angeles Zoo. Eventually we made it the Observatory where Mark posed with the statue of James Dean (his famous “Rebel Without A Cause” was filmed on site) with Mt. Lee and the world famous Hollywood sign acting as a backdrop. Cavendish is a man of few words, but throughout the two hour ride he would answer questions and pose for countless photos.

The pace was slow and steady until we hit the descent from the Observatory down to the Greek Theatre when Mark put some heavy “body English” into his Venge and started ripping the turns at high speed — awesome! 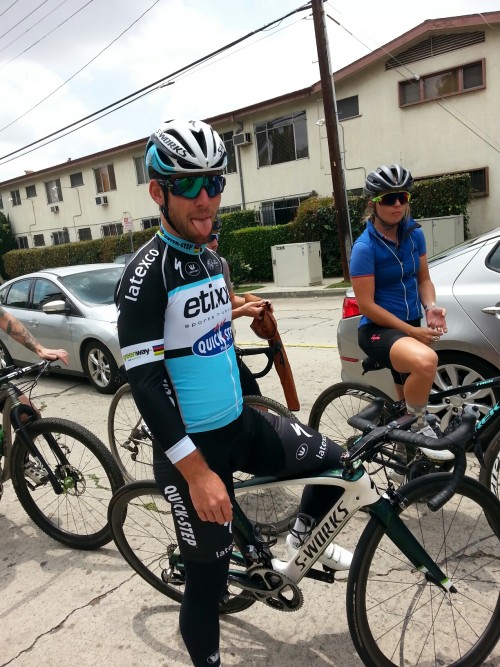 Mark: How do you like those disc brakes?
Zap: They work pretty good…sometimes they squeal.  Are you planning to try disc brakes now that the UCI has approved them to test?
Mark: Yeah they want us to try them. The problem with racing with disc brakes is not the brakes, it’s with so many guys in the pack that don’t know how to ride…they just grab a handful of brakes which causes problems. Also, I seldom get taken out from a guy crashing in front of me, it’s usually getting rear ended from someone behind me.

Zap: (pointing to his three strap Nike shoes) So, I guess you’re not a fan of Boa closure systems?
Mark: I tried them, but they just aren’t for me.

Zap: Are those Nikes made for you out of Italy?
Mark: Yeah.

Zap: So what comes next for you before July?
Mark: I’m going to go home and do some training – I always gain weight when I come to this race, and then the Tour de Suisse, before we head to France in July.

And with that, the ride day was pretty much over. We rode back to the Ace Hotel where Mark had to get ready to head to the airport to get home. Many thanks to Mark for his patience and hospitality and especially to Blick for the invite (and the sweet iPhone photo up top).