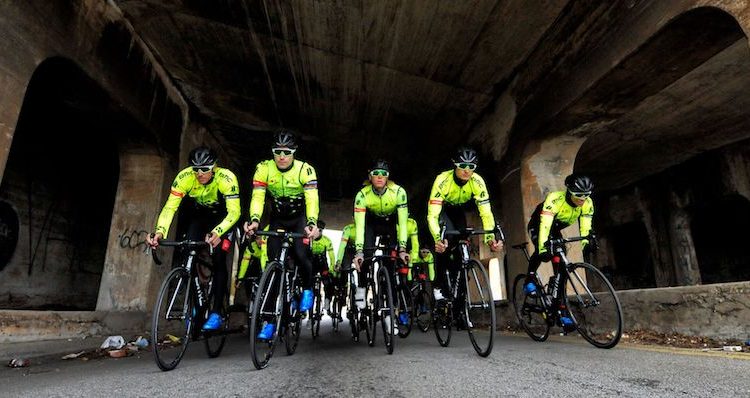 Press Release — The second team camp for Holowesko|Citadel p/b Arapahoe Resources wrapped up with a ride in the rain. Instead of complaining, though, the team took it in stride—perhaps as a sign for what’s ahead in the season to come. Moving to the Pro Continental ranks means pushing a little harder, going a little further, and making no excuses.

“Getting the riders together again before the first event of the season gave me insight into the dedication and professionalism of each of our riders and staff,” says Thomas Craven, chief sports director. “Let’s face it … Greenville in January can be downright cold and rainy, and when it actually was, the guys weren’t phased. That shows me that we have a very special group this year that won’t be intimidated by anything or anyone.”

The team spent the week in several different training sessions led by performance director Bobby Julich, who planned a series of training rides and exercises particular to each rider. “We had to ease into structured training and make sure not to do too much intensity at the beginning due to the fact that many of the riders were on new BMC bikes and were in different phases of preparation,” explains Julich. “We had a great week, though. We exposed the riders to some new workouts and benchmarked some specific metrics to get a better idea of the strengths as well as areas for improvement with each rider. I couldn’t be happier with how everyone stepped up their game in preparation for the season.”

The first race of the season, Colombia Oro y Paz, is also a race that carries special meaning for the team. For the riders, this is their first time racing as a Pro Continental team, so they’re ready to prove themselves in a larger arena.

For George and Rich Hincapie, the race is also an important one because of its location: Their family is originally from Colombia, and the Hincapie Sportswear factory (run by George and Rich’s uncle, aunt, and cousin) is located in the city of Medellin. “We’re racing where our family is from, where our apparel is produced,” says Rich Hincapie. “We’re so excited for this opportunity.”

The squad for Colombia includes John Murphy, TJ Eisenhart, Miguel Bryon, Ruben Companioni, Bryan Gomez, and Brayan Sanchez (the latter two also Colombia natives). Says George Hincapie, general manager, “Our Colombia team is in good shape and ready to start racing. I expect Murphy to be up there in the sprints and TJ to be up there in the climbs. I feel sure the team will work well together in our first race as a Pro Continental team.”

Rain in Spain keeps Valverde ahead in Valencia