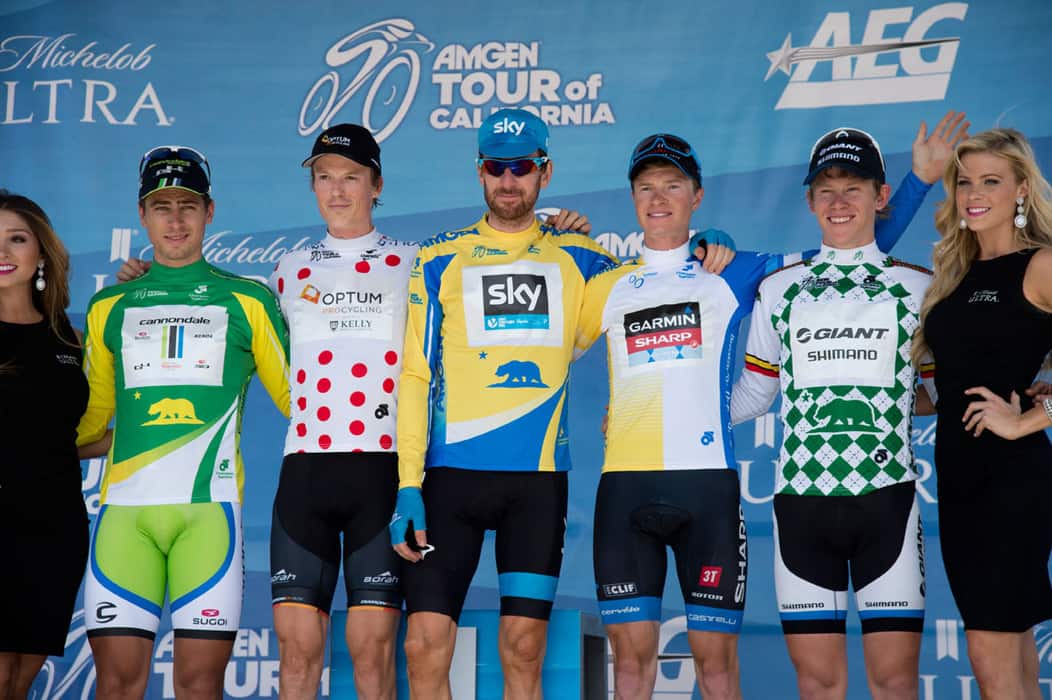 Amgen Tour of California, presented by AEG, announced today that professional cyclists return to Lake Tahoe for the men’s Stage 5 finish, as well as the women’s Stage 1 start on Thursday, May 19, 2016. The men will take off in Lodi, Calif. and finish at Heavenly Mountain Resort’s California Base Lodge in South Lake Tahoe. The women will also start/finish at Heavenly Mountain Resort on May 19.
The competition moves to Folsom, Friday, May 20 with both the men and women’s time trails. The men’s eight stage course will lead World Champions, Olympic Medalists, top Tour de France competitors and other elite professional cyclists south to north for only the second time since the race began in 2006. The race span nearly 800 miles between 12 host cities through California’s breathtaking roads and sceneries, May 15-22.
The Amgen Tour of California Women’s Race, empowered with SRAM, competition covers approximately 200 miles, May 19-22. The race will be the first U.S. event on the first-ever UCI Women’s World Tour (WWT).
“Hosting elite cyclists in both men’s and women’s competitions reinforces the region as a leading cycling destination for both extreme competitors and casual recreational enthusiasts,” said Carol Chaplin, executive director of the Lake Tahoe Visitors Authority. “Tahoe South and our partners welcome back the competitors, sponsors, fans and media to our area for another season of biking, racing and cheering.”
Tahoe South has been recognized by national media outlets including Good Morning America, Travelocity, Orbitz, USA Today, ESPN The Magazine, and others for its scenic splendor and reputation as a leader in outdoor recreation, entertainment and dining. The famed loop around Lake Tahoe is 72 miles along what have been described as “America’s Most Beautiful Drive.”
South Lake Tahoe is renowned for several summer biking events, trails and a new BMX bike park that opened summer 2015. The annual America’s Most Beautiful Bike Ride circumnavigates the Lake, Sunday, June 5, 2016. Another chance to circle Tahoe’s 72-mile shoreline is during the annual Tour de Tahoe Bike Big Blue Race, Sunday, Sept. 11, 2016.
Stage 1 – San Diego, May 15, 2016
The Amgen Tour of California has entered North San Diego County twice before, but for the first time, the race will reach the heart of the city with Stage 1’s start and finish on the water near Mission Bay and downtown San Diego.
Stage 2 – South Pasadena to Santa Clarita, May 16, 2016
Stage 2 will begin in first-time Host City South Pasadena, with much of the race contested in the Angeles National Forest, ending with the stage conclusion in veteran Host City Santa Clarita. Of the 2016 lineup, Santa Clarita has the distinction of having hosted the most stages (11).
Stage 3 – Thousand Oaks to Santa Barbara County, May 17, 2016
As well as serving as a popular training ground for professional and weekend cyclists alike, Thousand Oaks is home to biotechnology company Amgen, the race’s title sponsor since its inception. The day will conclude with a thrilling, first-time mountaintop finish at Gibraltar Road that has been 11 years in the making (road conditions precluded the oft-requested finish until this year).
Stage 4 – Morro Bay to Monterey County, May 18, 2016
Racing on Highway 1 south to north, this stage will highlight two first-time hosts this year, Morro Bay and Monterey County. The riveting and technical race day conclusion will be at a venue known for speed – the Laguna Seca Recreation Area, host to auto and motorcycle racing at the highest level.
Stage 5 – Lodi to South Lake Tahoe, May 19, 2016
From here out, the four-day women’s race will run in conjunction with the men’s, including the same start and finish cities except for this day, when the women begin and end in South Lake Tahoe. Lodi welcomed the 2015 Amgen Tour of California and is back for a second round with a men’s stage start this year. South Lake Tahoe hosted a successful two days of the Amgen Tour of California Women’s Race last year, and this will be the first of the four-day women’s race. Featuring a long day of climbing, the stage will reach the highest elevation ever mounted by the race: 8,600 feet.
Stage 6 – Folsom Individual Time Trial & Women’s Team Time Trial, May 20, 2016
The men’s individual time trial returns to Folsom where Team Sky’s Bradley Wiggins dominated en route to his 2014 overall Amgen Tour of California victory. The women will compete in a team time trial on the same course.
Stage 7 – Santa Rosa, May 21, 2016
In 2006, the world took notice as record crowds flooded downtown to watch the race roar into Santa Rosa for a spectacular finish. This year’s stage will incorporate a portion of the uber popular Levi’s GranFondo, with the men and women competing on different courses.
Stage 8 – Sacramento, May 22, 2016
As an 8-time host, Sacramento has seen some of the most exciting stages and race moments, and will up the ante for 2016 with the grand finale of both the men’s and women’s races for the first time.
Amgen has been the title sponsor of the race since its first year as a platform for Breakaway from Cancer®, its national initiative to increase awareness of important resources available to people affected by cancer – from prevention through survivorship. To learn more, visit breakawayfromcancer.com.
To experience the race as a VIP from an all-inclusive hospitality tent or through exclusive once-in-a-lifetime opportunities, visit the Amgen Tour of California website at amgentourofcalifornia.com/vipaccess or email [email protected].
Interested in sponsorship or expo opportunities? Please visit amgentourofcalifornia.com/sponsorship for further details.
For real time updates on events, promotions, packages, conditions and events in Tahoe South, The Lake Tahoe Visitors Authority is on Facebook: www.facebook.com/TahoeSouth, Twitter: http://www.twitter.com/TahoeSouth, YouTube: www.youtube.com/LTVA, Instagram: www.instagram.com/tahoesouth and use #tahoesouth to share posts. For Tahoe South information: 1-800-288-2463 or http://tahoesouth.com.