The travails and treasure of building a bike from scratch 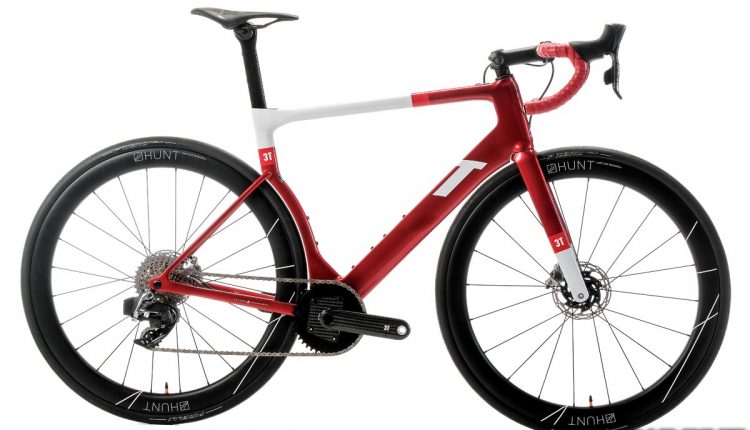 ONE PIECE AT A TIME

It is a fact that the majority of Euro bikes rolling on the roads of America all started off as a bare frame that had to be built up. For a variety of reasons, it’s easier for American distributors to deal with importing bare frames than complete bikes. Equally, for a variety of reasons, American cyclists looking to build their Euro dream bike prefer to create their custom bike by piecemealing the effort from a wide-ranging menu of products
and accessories.

It was three years ago (RBA, October 2017) that the radical-looking 3T first appeared in the mag The bike was of course the brainchild of Gerard Vroomen, who had made a name for himself as a designer for a rash of attention getting and race winning Cervelos. Prior to the Strada’s arrival, it had been preceded by a string of keyboard-fueled rumors and opinions. While the bike bore certain similarities to earlier Vroomen designs, it nonetheless stood apart as something new and different. And, where was the front derailleur?!

That’s right. In the days since his departure from Cervelo, Gerard had come to appreciate and embrace the newfound concept of 1x drivetrains. While the 1x gear range was just beginning to gain favor with the gravel crowd, the thought of applying a single chainring to a racy road bike seemed unthinkable. Welcome to the mind of Gerard Vroomen.

In fact, in that first test we commented on the “level of confusion” that surrounded the bike and its unique profile. Was it a climbing bike? A crit bike? A gravel bike? A track bike? It was simply a road bike, albeit one with a different set of design parameters. Which, as we said then, “It’s all about the numbers—aero numbers, rolling-resistance numbers, unique geometry numbers and stiffness numbers. The bike stands apart as it minimizes, maybe even eliminates, all forms of excess and focuses instead on the essentials of performance.” Talk about inviting! 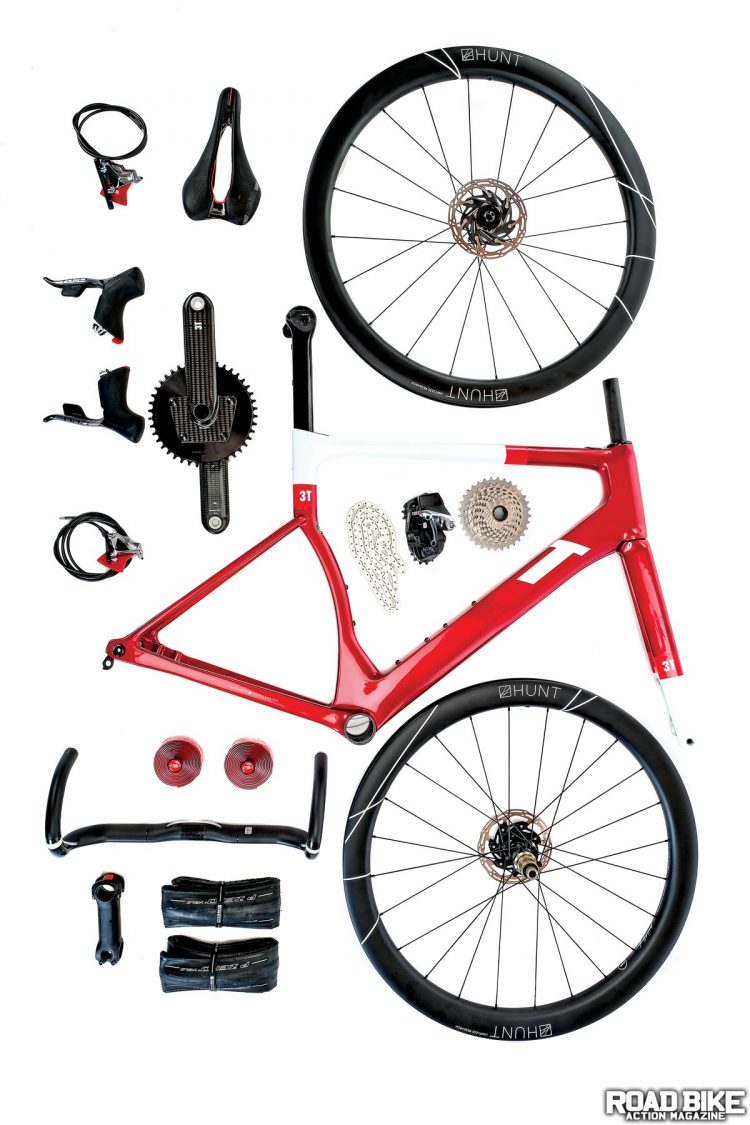 First things first, our Strada Team frame has a special red paint job that we first spotted on display at the Eurobike show last year. The deep red color stands apart from the faint salmon red found on the production bike, which we were never fans of. The frame is available in five sizes and sells for $2699.

You might be asking yourself, why revisit a bike we tested three years ago? Truth be told, while the earlier Strada performed well, it had its persnickety detractors owing to the gaps in the 11-speed gearing. Of course, in the time since that first test, SRAM introduced their wonderful 12-speed Red AXS drivetrain, which helped optimize running a 1x drivetrain. In that same time, both wider-wheel and -tire choices have also evolved. All in all, the Strada frame seemed like an ideal choice for a build-up project bike.

After the bike box and parts bag showed up, as soon as we stopped ogling the frame, all our attention turned to the 3T Torno crank. In a word—wow! The one-piece carbon crank and spindle are handmade at the 3T factory in Italy, in addition to its narrow-profile features with a unique integrated spider to add to the its aero efficiency. Interestingly, the 42t chainring is made in America, courtesy of the lads at Wolf Tooth in Minnesota. Depending on your leg strength, you can choose between 36, 40, 42, 44, and 46t rings. The 449-gram Torno crank is available in three sizes—170, 172.5 and 175mm—and sells for a cool $1,260.

The other high-profile arrival that made the spec list was a pair of Limitless wheels by UK wheel brand Hunt. These 1,711-gram wheels (776f/ 935r) were designed specifically to combine the age-old importance of aero efficiency with the new-age embrace of wide tires. The wheels went through a lengthy aero study in the wind tunnel to come up with a 48mm-deep rim shape that cuts the wind while providing a super-wide 35.5mm outer width.

More unique is the proprietary rim-wall design whereby a low-density polymer is co-molded inside in place of solid carbon. The Hunt hubs spin on upscale CeramicSpeed bearings, and thankfully the bladed spokes use external nipples.

“In our first test of the 3T Strada, we commented on the ‘level of confusion’ that surrounded the bike and its unique profile. Was it a climbing bike? A crit bike? A gravel bike? A track bike? It was simply a road bike, albeit one with a different set of design parameters.”

Thanks to the 22.5mm internal width, the 28mm Pirelli PZero Velo tires ballooned out enough that we were initially concerned if there would be enough tire clearance, especially in the tight confines of the sculpted rear triangle.

Since we last visited the 3T Strada back in 2017, there have been quite a few changes to what we knew then about the bike. Following some blowback from consumers who weren’t ready for a 1x road bike, a new 2x version was released. And, instead of having to endure both the rewarding and frustrating adventure of building a bike from the frame up, 3T now offers three complete bikes priced at $3199–$4699.

When it came to building the bike, we (Troy, actually) endured more than a few aggravating moments. The first came when we tried to run the hoses through the frame and fork, but found that the internal guides were kinked, which resulted in them having to be pulled out and not used at all. He also said that the SRAM hoses have a tip on them, which made them “priceless” while assembling the bike.

While mounting the 122-gram Selle Italia SLR Boost saddle, it made Troy come to the conclusion that Enve’s twin-bolt seatpost was no longer the most over-designed and difficult to set up. The 251-gram 3T post now has that claim to fame.

The 3T Fundi fork is smartly designed specifically for the added forces of disc-brake power. However, the shape of the left-side fork-leg tip and the locknut for the brake rotor came in contact, and we had to use another style.

While it was our intention to have the Strada project bike built up for a complete test in this issue, owing to a handful of hiccups in the build process, we were unable to get the bike finished in time. Stay tuned for chapter two of our 3T Strada project bike when it gets fully built and taken out for our test rides. 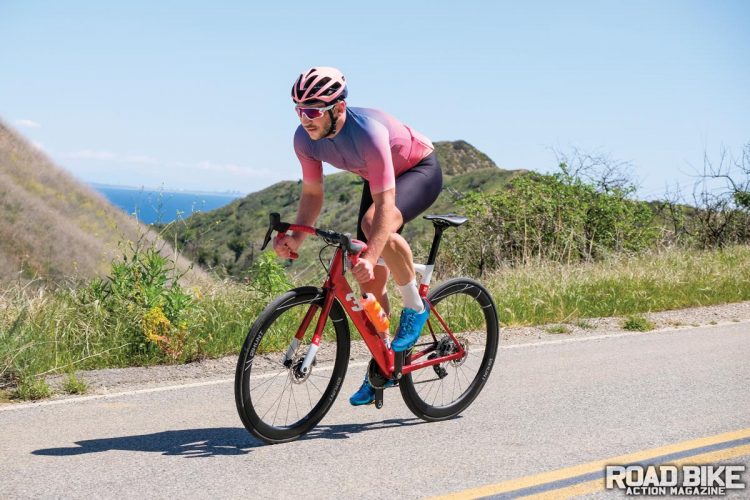 EVERYTHING YOU NEED TO KNOW ABOUT DISC BRAKES