How to Succeed at Cyclocross Without Really Trying 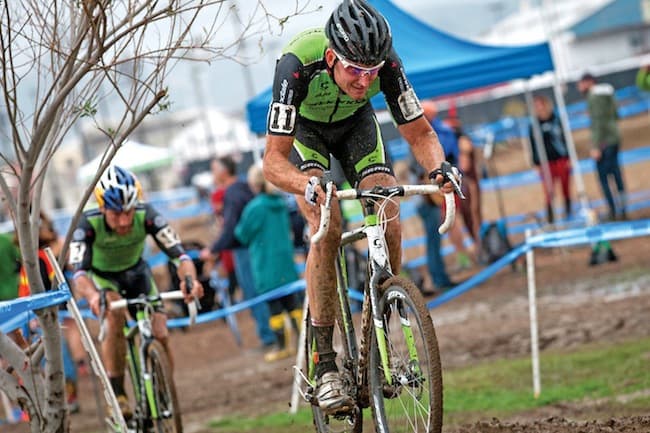 Let’s face it, racing cyclocross isn’t much fun. It’s hard. Often held in foul weather conditions. It can be cold. It’s dirty. Your bike can get awfully beat up. And, probably worst of all, there’s all that technique you have to master before you can have any chance of doing well. Sure, ‘cross bikes run with dropped bars and look like your road bike, but don’t fall for it. Real ‘cross bikes are specialized rigs that, at best, might qualify as a distant cousin to a standard road bike. Racing cyclocross is also nothing like road racing. It’s short and brutal-and that’s just part of the reason that it’s such a great sport.

We talked with three of the top U.S. racers to get the how, why and when of cyclocross training. Ryan Trebon (Cannondale-Cyclocross World.com), Jeremy Powers (Rapha-Focus) and Tristan Schouten (Optum-KBS) break down their specific training programs and share workouts that will help riders of any level.

RBA: How far before the start of the ‘cross season do you begin your prep?

Trebon: Basically, March is when I begin my preparations and structure the season around being ready in September. I’ll do a lot of base miles in the spring, with some mountain bike racing added in. After a small break in July, August and September are critical in how you’re going to do in November. In those months, I’ll add in a lot of threshold and VO2 work to build my racing depth.

Powers: I plan two builds into the season, with the second one beginning in July with about 10 days off at the start of the month. Then I have a few weeks with no intensity, just light to moderate riding. In August I always do a big stage race with Jelly Belly Pro Cycling, like U.S. Pro Challenge in years past and Tour of Alberta this year. That gives me good volume and intensity, then I’ll go into the ‘cross season and use the first races for the last bit of fitness.

Schouten: Even though my season is focused on ‘cross, I typically begin doing specific workouts in August. Before that, it’s just general preparation-putting in the time and doing about 10 mountain bike races. I mostly focus on two- to three-hour rides and am not so much into big base miles. I have to manage my time since I have two kids and a job outside of racing, plus I live in Wisconsin, where it might be 40 degrees and raining out, so training needs to be specific and not just large volume. 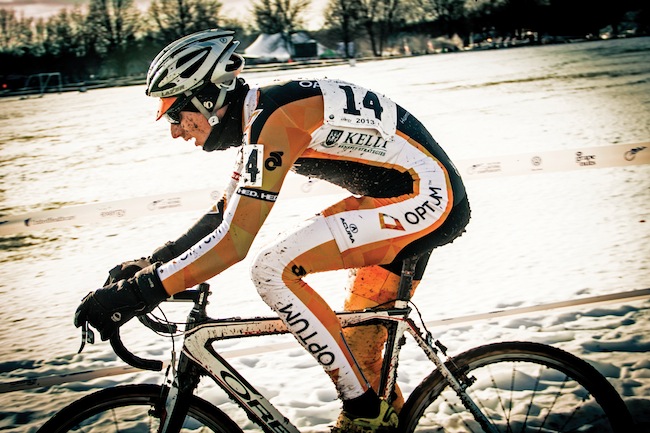 RBA: What specific intervals get you into top ‘cross shape?

Trebon: A lot of threshold work is important; you need to be fast for an hour, not just five minutes. I’ll do four or five 20- minute threshold intervals to get in the total work time of a race. For VO2 max intervals, I do seven or eight 3-minute-on, 3-minuteoff intervals. It’s important to do back-to-back hard days to get the needed depth in fitness.

Powers: Shorter intervals work best for me, but what’s right for me doesn’t mean it’s necessarily the best for everyone. I try to get in a total of one hour at threshold in a workout using shorter efforts rather than 20?30-minute efforts. I think the total work duration is the most important factor, not necessarily how you break it down.

Schouten: Eight weeks before the first big race I’ll begin the specific intervals, like two-mile efforts. You simulate the start with a 30-second max effort, then maintain an effort at 110 percent of threshold. I’ll do two or three of those in a workout. Probably one of the best ‘cross-specific workouts is doing micro bursts-15 seconds at close to max, then 15 seconds off for a total of 10 minutes. You’ll think it’s easy for the first few minutes, but the last few minutes you’ll really be suffering. It’s like going corner to corner in a race-all out, then coasting. Another great workout is what my coach calls ‘dirty 30s’-run for 30 seconds with your bike, then on the bike for a 30-second max effort, then 30 seconds of recovery. Continue repeating that sequence up to 10 times. It’s good for transitioning from run back to max effort on the bike.

RBA: How much time should be spent riding the ‘cross bike?

Trebon: I’m on the ?cross bike with road tires all the time now. I didn’t feel comfortable going back and forth between my road and ‘cross bike; the position was different, so I’m on it all the time now. During the spring I spend a lot of time on my mountain bike-that helps to keep my cornering and handling skills up.

Powers: I never stop riding my ‘cross bike. I take my ‘cross bike out instead of my mountain bike, and ride it on the road with slick tires just to stay familiar with the position. A lot of guys only start riding their ‘cross bike in July or August and have to re-familiarize themselves to the position. I’ll use it as a mountain bike and look for trails where I can push it in the corners to keep my skills up. There’s a limit to the bike, but it’s a better alternative to riding my MTB since it’s more specific to what I need.

Schouten: Generally, most of my training time is on the road bike, then I’ll throw road slicks on my ‘cross bike a couple months before the first race to get used to the position. Typically, I’ll do one workout per week with ‘cross tires on, something like the dirty 30s. 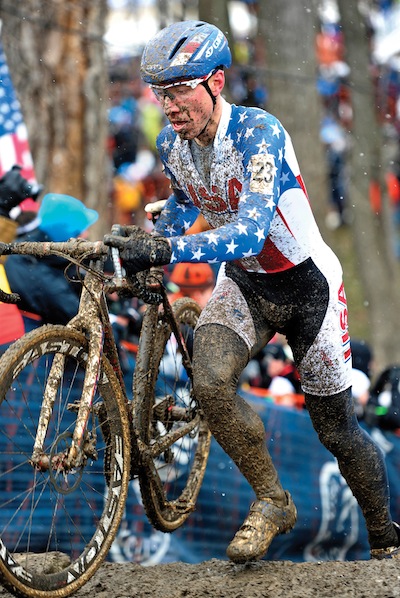 RBA: What specific drills do you do or recommend doing?

Trebon: People spend so much time training that they lose time everywhere else. If you can’t go around a corner or make it over a barrier quickly, it doesn’t matter how strong you are. Finding someone who can show you how to do it correctly is important. It’s not just about practicing; it’s about practicing doing it correctly. Before trying to learn how to go fast, you need to learn technique.

Powers: A cyclocross camp where you can learn proper technique and the fundamentals before increasing your speed is worth the money. New ‘cross riders end up with bad technique and end up getting injured from a pedal in the shin or hitting a barrier, so I’m always telling riders at the camps to keep it slow initially. I have a 45- minute DVD called Jeremy Powers Cross Camp, which teaches the basic skills you need.

Schouten: For most people, spending time working on drills would be very beneficial. Hopping back on the bike, handling a corner or getting through a rough section becomes a lot harder at race pace when you’re at VO2 max. The more you practice at race intensity, the more comfortable you’ll get. I used to do ‘cross workouts year round, but eventually got bored by it, so now I add them in about six weeks before the first race.

RBA: How important is it to add running into the training regimen?

Trebon: Before the first race I’ll do a couple short runs just to get past the soreness. In Europe, the races have a lot more running than the typical courses here in the U.S.

Powers: I’m a pretty mediocre runner; it’s one of my weaknesses, so I have to work on it. I begin running in July and slowly build the distance and intensity, keeping it below 80 percent of threshold for the first few weeks and working up to two 20- to 30-minute runs. Avoiding running injuries is a must, so I run on trails to make it easier on my knees. I also use the correct orthotics and stretch pre- and post-run. Core work like back exercises and planks are important to me, too, especially as I get older.

Schouten: I’ll do a couple runs before the season starts just so that I’m not sore after the first race. The first couple times I do barriers I’ll be sore, but after that, it’s not an issue.

RBA: What to eat and when to eat it?

Trebon: Three hours before the race I’ll have rice and eggs, stuff that Allan Lim has in his cookbook (The Feedzone). During a really hard race I can burn through 1200 calories an hour, plus the time you’re warming up before the race-you burn a lot of calories! You don’t want to bonk the last 10 minutes, since that’s oftentimes the entire race. I’m not gluten-free or anything like that; I’ll eat whatever I can get in my face that’s carbohydrates. Hydration is a really big deal too. Even if it’s cool out, you’re still sweating and probably not taking anything in during the race, so you need to be really hydrated beforehand.

Powers: Stick with clean, relatively bland foods. Reflux or burping up your last meal in a race is the last thing you want. Oatmeal and eggs are going to be good, while bacon and donuts not so much-it’s common sense. Don’t change it up before the race. Eat what you eat when you train and you know what works for you.

Schouten: On race day I’ll just eat bland, easy-to-digest foods. Maybe a turkey sandwich a few hours before the race, and then Clif products if I’m hungry closer to the race. You don’t want to go in with a full stomach but not hungry, either. The biggest thing is staying on top of your hydration, especially if you’re traveling.
Road Bike Action

Cyclocross 101: How to Clear Barriers With Todd Wells

Zap’s Column: Being Good With Being Slow