Inside the Handmade Bike Show, The Finale 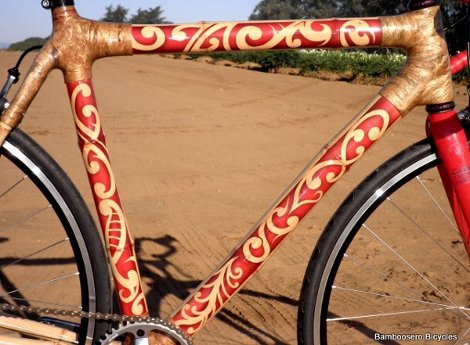 The city of Austin proved to be the perfect backdrop to all the peculiarities of the handmade show. From the scenic river trails to the awesome 9th St. dirt jump track, the live music on 5th and 6th street, and all the cool places to eat and drink, the Texas Capital was a hit with all the two-wheeled freaks, geeks and partisans who gathered for the seventh running of the North American Handmade Bicycle Show. 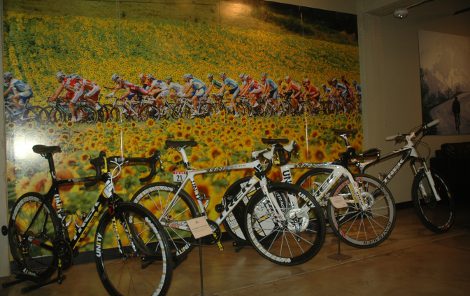 It goes without saying that any visit to Austin must include a stop at Mellow Johnnys, easily one of the country’s most impressive bike shops which also happens to be owned by Austin’s most famous resident, Lance Armstrong. Although the downtown area of Austin is home to a variety of cool restaurants, we found two in particular that let us stay on our working man’s budget while still coming away well satiated. One was the good Mex found at The Screaming Goat (pass on the breakfast burritos) and the other was the awesome burgers sampled at HopDaddys.

WHAT ABOUT THE SHOW
The North American Handmade Bicycle Show set several new records in what was seen by many as the most successful show in the event’s seven-year history.

NAHBS founder and president, Don Walker, said, “I am over the moon right now. The amount the show has grown in the past 12 months has exceeded all of my hopes and expectations. And with the show going to Sacramento, California, next year, I have a feeling we’re headed for another big one 12 months from now.”

SO, MARK YOUR CALENDARS…
The Sacramento show is scheduled for March 2-4, 2012.

Sharing the weekend with the thousands of riders participating in the Colnago Gran Fondo just blocks away, the 2011 San Diego Custom Bicycle Show promises to be bigger and better than ever.

* A third of the exhibitor space filled up in the first month following the announcement, and the latest additions can be viewed on the show website. In addition to the tall-bike jousting, kinetic sculpture parade, and bicycle rodeo, activities include a vintage parts swap with framebuilder’s only swap before the swap opens to the public.

* There will be parties with live music by the Offbeats (a British invasion tribute band) and a unique performance by the yet-to-be formed MotherFluxers: Brian Baylis (Baylis Cycles) on drums, Stephen Bilenky (Bilenky Cycle Works, the Notekillers) on bass, Eddi on saxophone, and Paul Sadoff (Rock Lobster Custom Cycles) on guitar.

* A special Women’s Panel convenes to discuss the topic of ‘Empowering Women Cyclists’.

* Interesting and informative seminars continue to be added to the schedule. Bill McCready, of Santana Cycle will deliver ‘Tandem Frame Design & Materials Technology. Richard Schwinn,  (Waterford Precision Cycles) together with Ted Ernst will present ‘Paramount – 70 Years of Handbuilt Glory’.  There will also be a Schwinn Paramount Concours d’Elegance showcasing an impressive array of historic and collectible Paramounts. 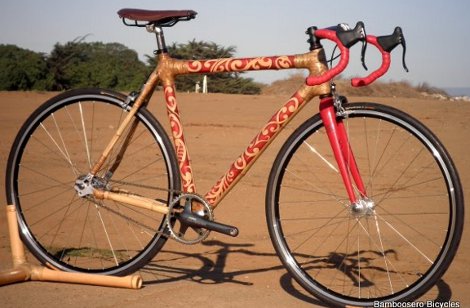 When Craig Calfee isn’t busy overseeing the production of his beautiful carbon bikes, he’s making sure that the growing production of his in-house made bamboo bikes are humming along. Of course, when he’s doing neither of those, he’s flying off to remote regions in Africa to further develop  a domestic bamboo frame business. Bamboosero is the name of the bikes that are handbuilt in Africa. Although this Bamboosero bike (above) wasn’t at Austin, others were and like the higher-end bamboo bikes that come out of the Calfee shop, they truly represent one of the more impressive tenets of the bike industry.

QUOTE: “Oh yeah, Craig’s come back from Africa with malaria twice, but he just shows up at office the day after he arrives and gets right back to work. Yeah, some of us are like…uh, is that contagious!?”

In case you missed my earlier reports from Austin:
Austin Report Part One 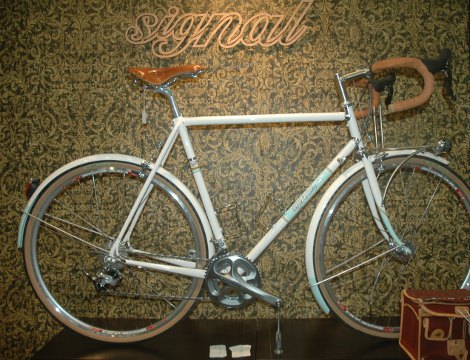 Matt and Nate are the two guys behind Signal Cycles. As was the case in many other booths, they also had some beautiful town bikes on display which provided good evidence of not only their penchant for detailed frame work, but also paint, which you might expect from two guys with BFA degrees in painting. 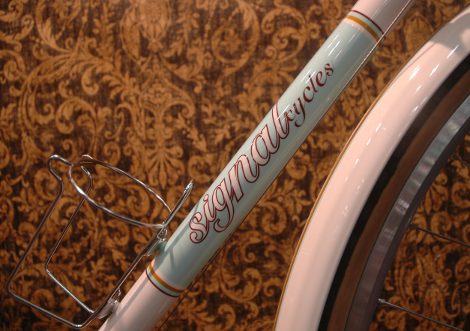 The thick coat of high luster paint helped the Signal stand out in the crowd. 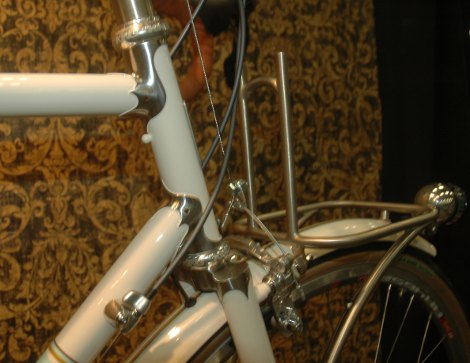 Beautiful lugs and their own handmade racks. 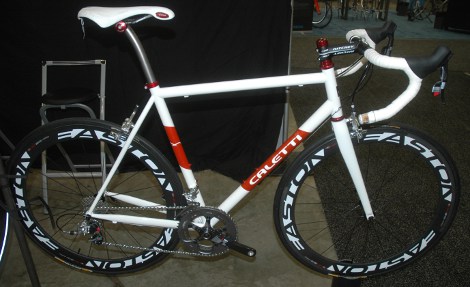 We jokingly asked Santa Cruz, CA. frame builder John Caletti where the lugs were on his bike were and he said, “Over at the Richard Sachs booth!”. And therein lay the individuality that makes up the world of hand-built frame makers – they all have different ideas about what’s the best way to make a bike. John likes welding the tubes. 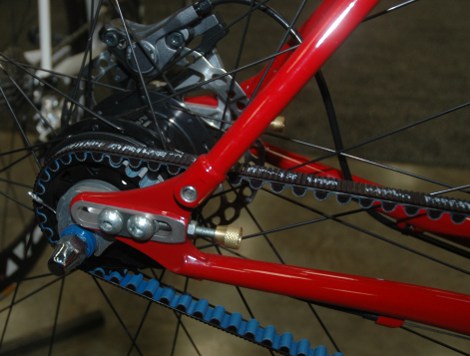 Just to prove how diverse his talents are, besides his meticulously built road bikes, there was also this nicely crafted singlespeed mountain bike on display at the Caletti Cycles booth. 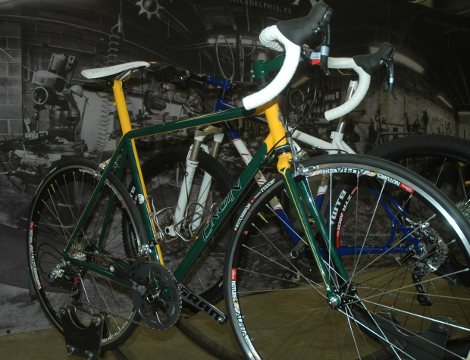 Drew Guldalian of Engin Cycles has won the Best Off-Road bike award twice, so just to prove his mettle (get it, mettle?!) in all forms of frame building, he brought a small stable of beautiful road bikes to the show this year. 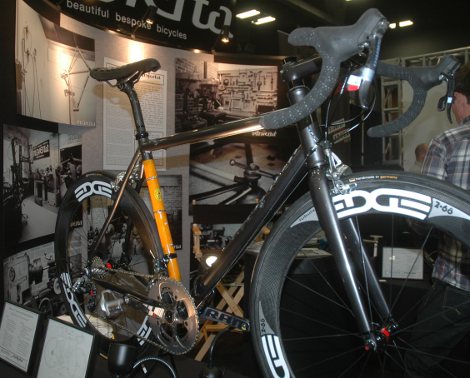 It’s a truism of sorts that most frame builders are kinda kooky, if not mentally for sure, than at least in appearance. Anthony Maietta of the namesake Maietta Handbuilt Bicycles seems neither. The Worcester, MA. builder is an engineer with an appearance that fits that profession perfectly, if not something even more conservative. And yet, his Maietta stood out as one of the more striking due to the abalone shell in-lay he used for the raised downtube logo and the rings found on the seat tube with its faux bamboo finish. 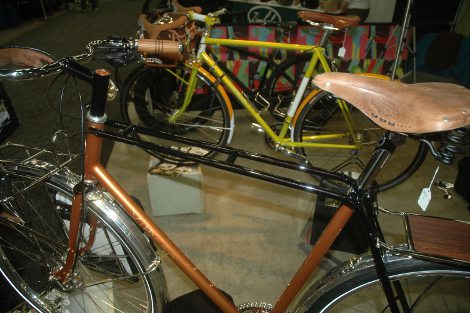 Running next to his beyond beautiful lime green town bike, Renold, the one man effort behind Yipsan Bicycles was showing off his true multi-talents this split tube town bike that had an entirely different look and feel to it. Custom is as custom does! 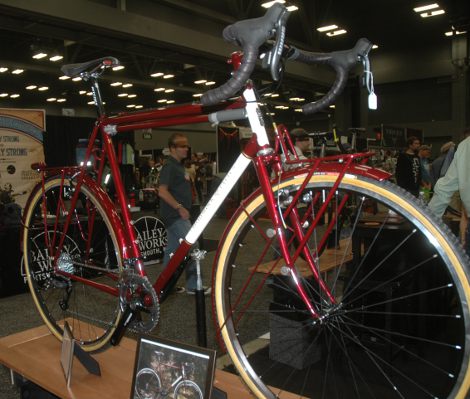 Shamrock Cycles owner Tim O’Donnell is a funny guy. Boasting that his bikes are built in the mountains of Indiana, his bikes show off an amazing attention to detail. In the winter this bike doubles as a full-on cyclocross bike. Shamrock also has the best web site name. 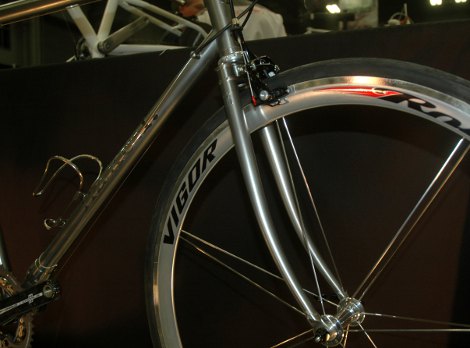 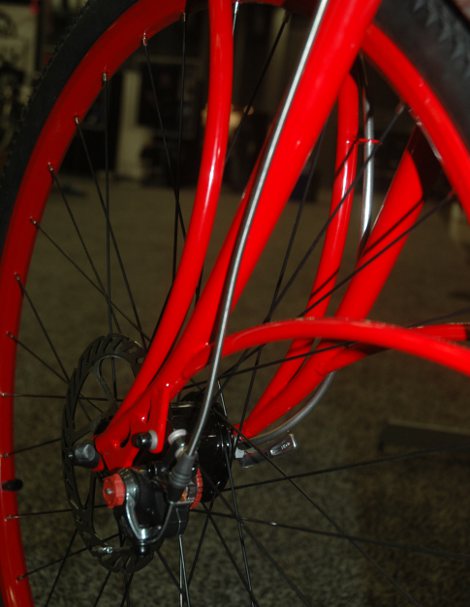 Disc brakes are coming. No, really! 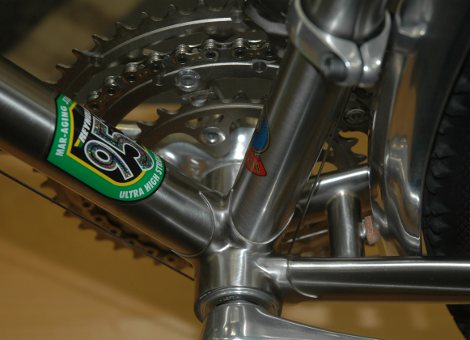 Anderson Custom Bicycles, a one man show out of St. Paul Minnesota, was showing off these beautifully mated Reynolds 953 steel tubes – gorgeous. 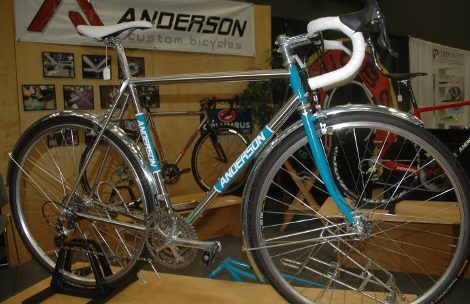 Here’s what the rest of the Anderson looked like.

What About The Show
The world’s number one custom bicycle show, the North American Handmade Bicycle Show moves from city to city each year. In 2012 it is scheduled for March 2-4, in Sacramento, California. NAHBS showcases the talents of individuals around the world whose art form is the bicycle. It aims to be a meeting point-both online and in person-for frame builders and consumers looking for custom-made bikes, for the sharing of ideas, and the promotion of a special industry with a rich history dating back to 1819. Since its first year in 2005, NAHBS has grown from a show with 23 exhibitors and 700 attendees, to 174 exhibitors and 7300 attendees.

Five Things You Should Know About…Tires

The Tour Shakes-Up The Jersey Chase