INSIDE THE HAUTE ROUTE ROCKIES

When Haute Route announced plans to expand their multi-day, climbing heavy cyclosportives beyond the European borders and into America’s Rocky Mountains it caught the attention of many, while others had no idea what sportive even meant. So, here’s a little background on Haute Route: they have been around for seven years and are known for putting on some of the most challenging multi-day timed events anywhere in the world.

Existing Haute Route events in the Alps, Dolomites and Pyrenees allow participants the opportunity to ride stages akin to the hardest days in a Grand Tour, while having full Mavic support out on the road, well-stocked rest stops, post-ride massage, and bag service at each hotel. It’s literally everything you need to ride your bike all day and not worry about anything else.

Last year, a dozen riders took part in a Haute Route Rockies test event to pre-ride the stages and ensure it was up to the Haute Route standards. We caught up with three of those riders–Tim Johnson, Janel Holcomb, and Neil Shirley–to get an inside look at what Haute Route Rockies is all about. Tim Johnson is a six-time national champion with decades of experience in road and cyclocross racing, while Janel Holcomb won a number of the hardest professional road races during her career and now works as an ambassador for Mavic, Focus and Topical EDGE. Between the road and mountain bike, Neil Shirley spent a total of 10 years racing professionally. All three will be back for the real thing this June 24-30 and were willing to share some first-hand event advice.

RBA: What’s the big deal with Haute Route? Don’t we already have enough stage races and cycling tours to choose from?

NS: Haute Route Rockies essentially takes the best elements of a pro-level stage race–timed stages, daily results, overall results, and every opportunity to challenge yourself in comparison to others–while also combining the best part of a cycling tour, which is having gorgeous riding terrain, the ability to enjoy the route at your own pace and access to rest stops with everything you might want to eat or drink on the bike. In my opinion, it’s the perfect cycling experience.

TJ: I don’t know too many bike riders out there that have ever done a 7-day stage race, besides maybe watching a week of the Tour on TV. There have been a lot of events using the bike as its focus, but none of those really push the athlete like this. For people that have decided that challenging themselves is what allows them to live life to the fullest, then this is the event to do it at.

JH: Stage races are often attractive for people who love racing and, despite busy schedules and personal life obligations, devote themselves to traveling throughout the racing season to show up on a start line to compete with their fellow category or age group racers. That bike life may not be very appealing to most cyclists. Haute Route offers the venue for people to be as competitive as they want, prepare as much as they want, and show up to the event whether they intend to stay with the front group each day or enjoy the views a bit more. All types of cyclists would find Houte Route interesting; not every cyclist wants to be a racer. 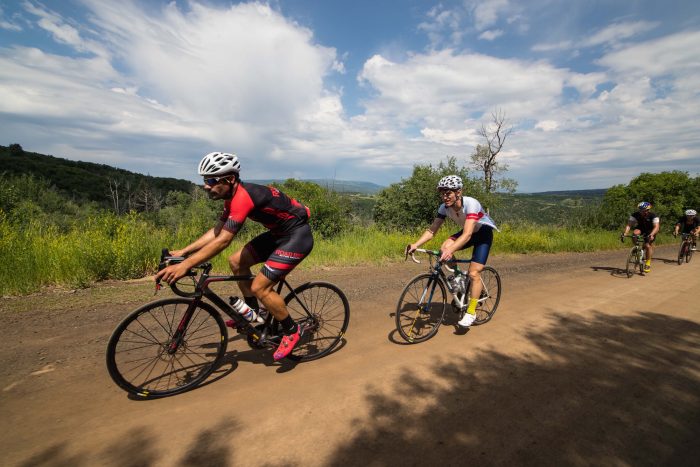 RBA: How hard is the Haute Route Rockies?

NS: I’m not going to sugarcoat it–it’s really damn hard! Over five hundred miles and 55,000 feet of climbing is no joke even for the most fit riders. Of course, as I found out when we rode the test event last year, when you have such good support out on the course and nothing else to think about other than enjoying your time on the bike and then relaxing at the end of the stage it all of a sudden becomes much more manageable. It can seem a little daunting when simply looking at the numbers for the week, but that also helps motivate me to be ready!

TJ: I don’t remember too much about the ride being difficult, just Neil complaining maybe…He’s right. It’s BRUTAL in spots. Really, altitude is a different beast and besides doing Leadville or Breck Epic, you won’t find another event that consistently keeps its participants up high in the mountains and on roads they’d never find on their own. I was just happy Janel was there last year during the Haute Route Rockies preview to take some pulls otherwise I’d still be out there.

JH: Can I say that the views are worth the pain? Because they are! Of course the altitude combined with the amount of climbing and hours in the saddle presents a serious challenge. I can’t think of another place I’d like to suffer though. The organizers have picked gorgeous routes and the ambiance in the start/finish towns will heal any mental wounds you develop over the course of the day.

RBA: What’s the best training advice for someone who isn’t a pro level rider and has to balance also having a job and a family?

NS: Even though I raced professionally in what now seems like a former life, I have a family and full time job, so there’s very limited training time available. One thing I try to do, and this would be applicable to training for any multi-day event, is to carve out a couple of 3-day blocks when I can arrange my schedule to fit. Three, four-hour rides in a row where I can focus on getting in quality riding always makes much more sense than aiming for one really big day on the bike. Also, ensuring that you are good about consistently eating and drinking on the bike is essential. As someone told me long ago during a stage race, “You’re eating for tomorrow”. So, if you want to stay consistent and feeling good each day, keep eating!

TJ: Pro level riders have all the time in the world to fine-tune their training to get a hoped for result. In the case of Haute Route Rockies, I’d like to think that someone who’s entered is looking to get a few questions answered for themselves: 1. Can I do it? 2. What does altitude feel like? 3. I’ve always wondered what it’s like to be a pro. To answer those questions during the 7 days we spend up high, you have to show up in a reasonable condition, but more importantly, with a mindset that allows for the unknown to occur…because it will.

JH: Start by looking at your full regular-life schedule and planning in training time so you know what you have available to you. Then make a plan that includes: 1. Climbing rides–they are good bang for your buck in that you can’t fake it up a climb; 2. Good fueling and hydration habits, especially pre- and mid-ride; 3. Intensity–when you don’t have all the time in the world, make sure that 2-3 of your rides each week include hard work. 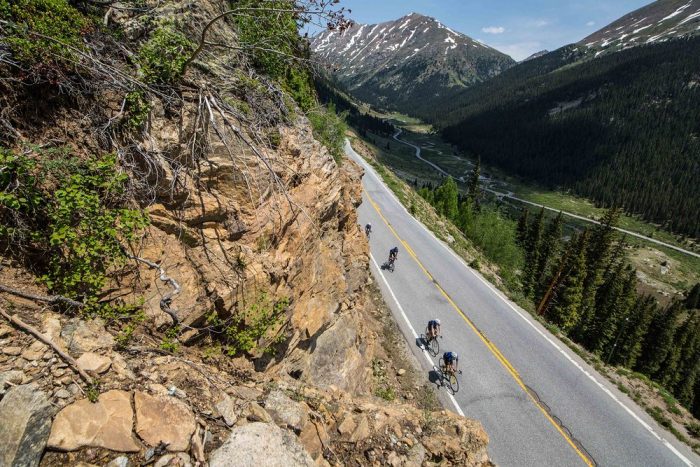 RBA: I hear there’s dirt roads on the route, can those be ridden on a road bike?

NS: I just wish some of the paved roads in California were as smooth as the dirt roads used for Haute Route. Most of the dirt roads used have a mag chloride treatment to reduce dust and better maintain road quality, which makes them smooth and fast. A standard road setup with 25mm tires will be perfectly fine. Trust me, the dirt road sections are some of the best parts of the entire course. The climb up Kebler Pass into Crested Butte is nothing short of spectacular!

TJ: Dirt is very different than “gravel”. Thankfully, that distinction is being made and riders can expect to find roads that ribbon throughout the mountains that aren’t really that rough, but as Neil said, very fast in sections and besides the obvious potholes and rumbled sections, it will be fine for most road bikes.

JH: Colorado should receive a medal of recognition for their dirt roads! During last year’s test event I was stunned by how smooth and packed the dirt sections were every day. I used my Focus Izalco Max (road racing bike) with Mavic Cosmic Pro Carbon wheels and rim brakes and it was fabulous. Disc brakes could be a nice option, but not necessary. It is really helpful, though, to practice riding dirt during training so you have some experience before arriving at Haute Route Rockies.

RBA: Any critical tips you can provide?

NS: For any multi-day event, energy management is important and once you factor in the altitude it becomes all the more critical. I recommend easing into the event and making sure you enjoy the first couple of stages without putting pressure on yourself to compete with those wanting to race the very first climb on the very first day. Allow your body time to adapt before digging deep physically. That should allow you to finish the week off strong rather than just limping to the finish.

TJ: I’d suggest that anyone riding in Colorado or at altitude for the first time take a few extra days to ride around Boulder and find out what the fuss is all about. Ask those who visit altitude, NOT THOSE THAT LIVE THERE, and you’ll get an idea of what it means. It’s not about your lack of breath, but it’s about how hard you push yourself and what you expect from that effort.

JH: Arrive in Colorado hydrated and rested. Then when the event begins, take the first few days easy and eat, eat, eat and drink bottles with mix. As Neil and Tim said, the effects of altitude are real but individualized. But no matter what, you will be so much happier in the 2nd half of the week if you take it easy the first half of the week. 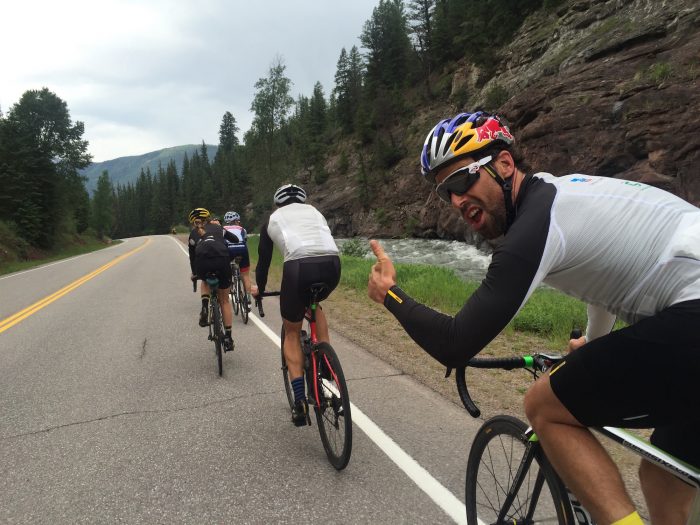 Be sure to tune in as well this coming Wednesday on the Haute Route Facebook and Twitter pages as they will be hosting a meet up where you can send in your own questions about this year’s Haute Route.

Nibali vs Quintana Sparks to Fly on Mount Etna