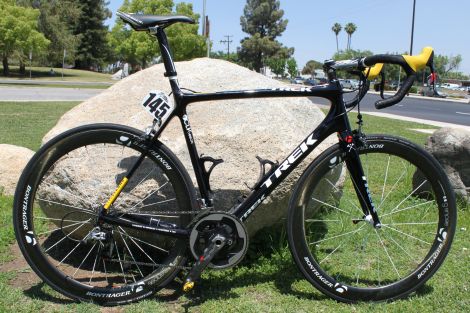 In the 8 years since we spotted Joe Dombrowski  as he was climbing into the pro ranks aboard a Trek Madone with the Bontrager-Livestrong team, much as changed for both rider and bike. Joe has since spent time with a variety of pro teams including: Team Sky, Cannondale-Garmin/F Education First , UAE Team Emirates and his current home at Astana. 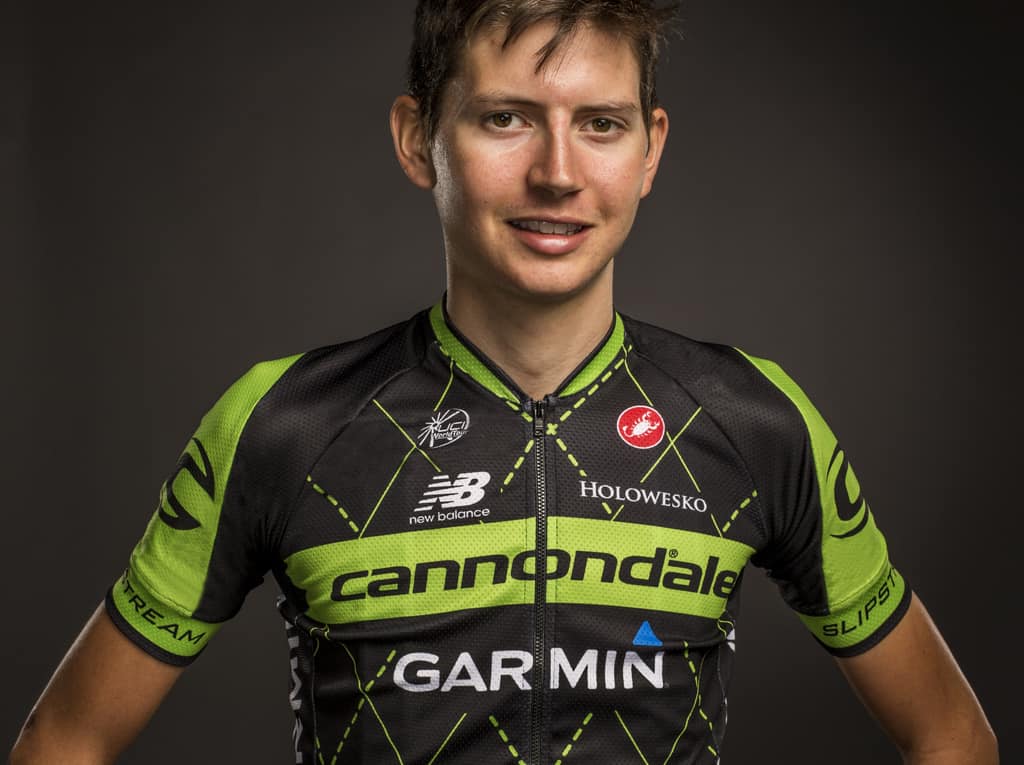 As evidenced by the radical new Gen-7 Trek Madone SLR that Trek unveiled last week for the Tour de France, much too has evolved with the bike.  With all that has changed between Joe and the Madone, we thought to offer a quick glimpse back to a decade ago when team riders first rolled out the then new Madone 6.9 SSL at the Amgen Tour of  California.

It was Amgen Tour of California’s Stage 7 ascent up Mt Baldy when 21-year old Joe Dombrowski lived up to the potential that Axel Merckx, director of the U-23 Bontrager-Livestrong team, knew he was capable of. Baldy was the day all the climbers and general classification hopefuls had been saving themselves for the entire week of the race. And Dombrowski showed most of them up, taking 4th on the stage, just ahead of seasoned pros and Tom Danielson, Chris Horner, and Levi Leipheimer. When we asked about Dombrowski’s chances on such a steep climb like Baldy, Trek’s liason to Bontrager-Livestrong Matt Shriver said, ‘The steeper the better. He’s going to shock some people on Baldy’. And that he did. 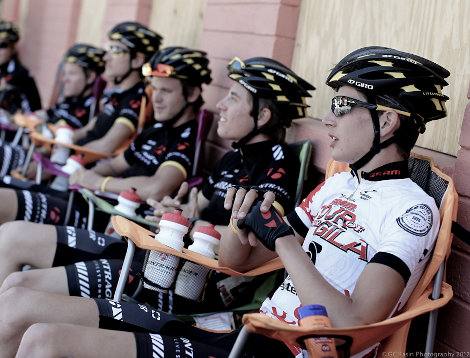 Besides winning Best Young Rider status at the Tour of the Gila, Joeseph (r) also finished  third overall. Photo: Glenn Kasin
Just like with RadioShack-Nissan’s Trek Madone 6.9 SSL team bike, you can get the same exact build as the Bontrager-Livestrong’s Madone 6.9 SSL through Trek’s Project One program. There you’re able to select each and every component you want, as well as a custom painted frame. The frames, which are made in Waterloo, Wisconsin, were the only American-made frames raced in the Amgen Tour of California. Additionally, the Bontrager Aeolus wheels used by the team come from Waterloo as well. None of the riders opted to ride Trek’s new Domane during Tour of California, but the relatively smooth roads didn’t exactly merit it either. However, most of the Bontrager-Livestrong team got their first taste of the Domane during the U-23 Paris-Roubaix on May 27th. 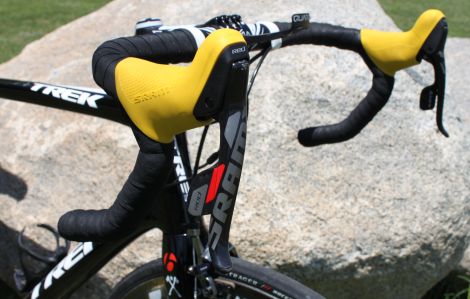 Dombrowski’s Madone was fitted with the latest SRAM Red gruppo, including the redesigned levers and textured hoods, which SRAM provided to the team in a custom yellow color. 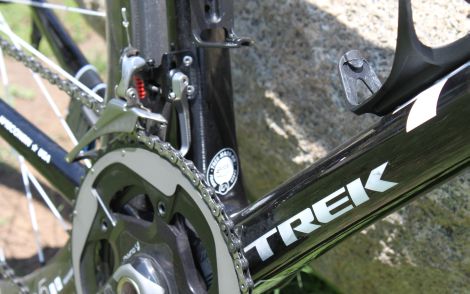 The single most-talked about component of the newest Red gruppo is the front derailleur. Its “Yaw” design allows it to twist when actuated, giving it an ideal cage angle whether you’re in the big ring or small ring. Chances are, based on Dombrowski’s showing at the Amgen Tour of California, that he was in the big ring most of the time. 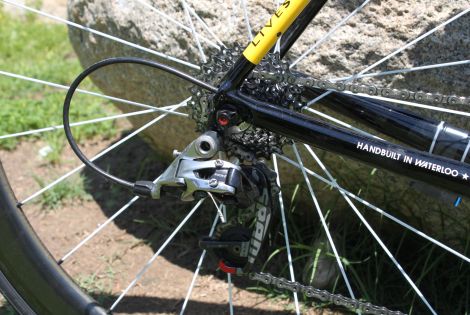 The 2012 Red group also features a redesigned rear derailleur with a longer B-knuckle than its predecessor, allowing for the use of a 28-tooth cassette, which Dombrowski happily used on the steep Mt Baldy ascent. Note the super-clean internal cable routing leading into the back of the chainstay. 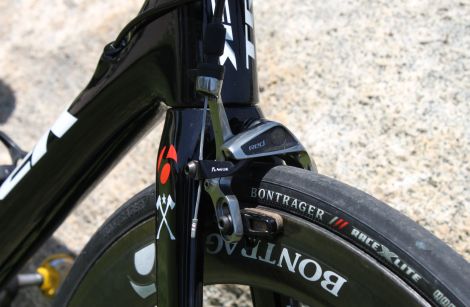 The new SRAM Red brakes feature a cam design that we’ve found to be quite effective. In fact, in a recent issue of Road Bike Action [June 2012], we were taken aback by their impressive modulation and power of the single pivot design. Dombrowski’s Madone is fitted here with his preferred training wheels: Bontrager Aeolus 5 carbon clinchers. 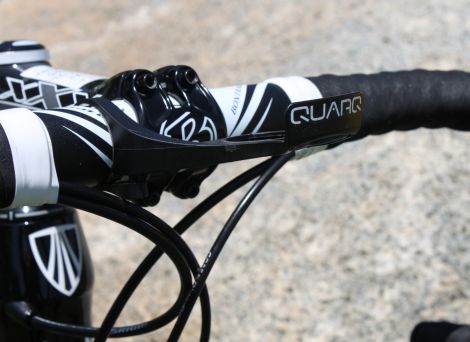 Hot on the heels of aftermarket mounts for Garmin cycling computers such as the Barfly, SRAM-owned Quarq has released a bar-mounted Garmin bracket as well. Thus, Dombrowski gets all of his ride data in a neat and tidy package positioned just in front of his cockpit. 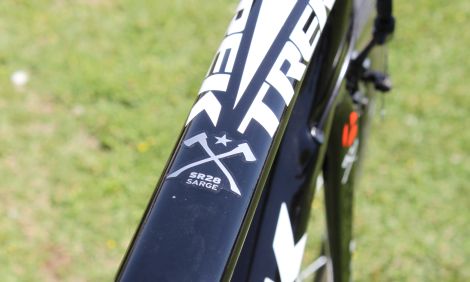 Under Bontrager’s crossed axe logo, “SR28 Sarge” is a reference to Trek’s team liaison Matt Shriver’s father who was recently killed in a helicopter accident when his Search and Rescue helicopter crashed while attempting a rescue.
Axel Merckx rewards his riders’ major accomplishments by awarding them with a battle axe decal on their top tube. Dombrowski has collected two so far since turning pro with the team in 2011; and if his Mt Baldy effort was any indication, he’s going to have battle axes covering his entire top tube by year’s end.
Like all Trek Madones, Dombrowski’s features a DuoTap computer sensor integrated into the non-driveside chainstay. The blue device that’s zip-tied into place is a timing chip. 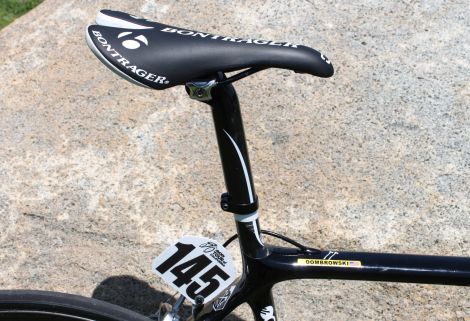 Dombrowski spends his time in a Bontrager Team Issue saddle. 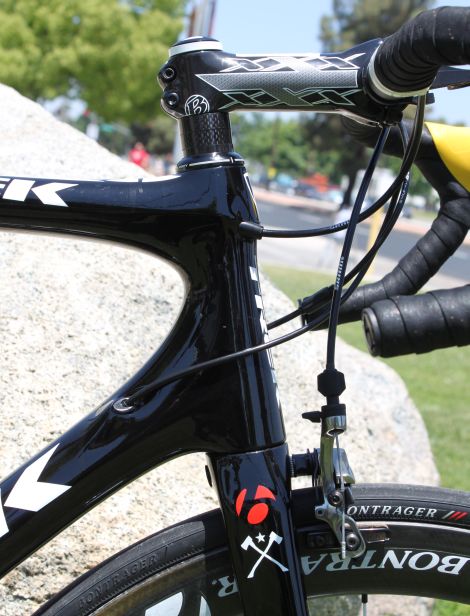 As you can see, the 6-foot, 2-inch tall Dombrowski has a high, climbing specific handlebar position. The loss in aerodynamics from a high handlebar position is something a lot of climbers don’t mind sacrificing in order to gain additional power from a more open hip angle.

CAN YOU CHARGE YOUR ELECTRONIC SHIFTING TOO MUCH?