Up close with a rare 1977 Confente Pro Strada

In the world of vintage bicycles, there’s beautifully crafted and there’s rare, and then there’s Confente. Confente is a name lesser known in the general cycling community but one that elicits a special reverence from collectors and enthusiasts alike.

Confentes are the type of bikes that people tend to wax poetic about. They’ll call Confente the Holy Grail of vintage bicycles and draw comparisons to the likes of a rare Stradivari violin. Okay, perhaps that’s a bit hyperbolic, but among the horde of vintage bicycles out there, Confente frames are truly among the rarest of the rare. Having produced only 135 frames bearing his name, the namesake builder, Mario Confente, died at the young age of 34. As such, they command a high price—the combination of rarity, excellent craftsmanship, and perhaps also the drama and tragedy surrounding Mario Confente’s work and death all working together to drive the value for his frames higher with time. The Pro’s Closet was fortunate to come into possession of this shining example after TPC founder Nick Martin had a serendipitous meeting with its owner on a plane. 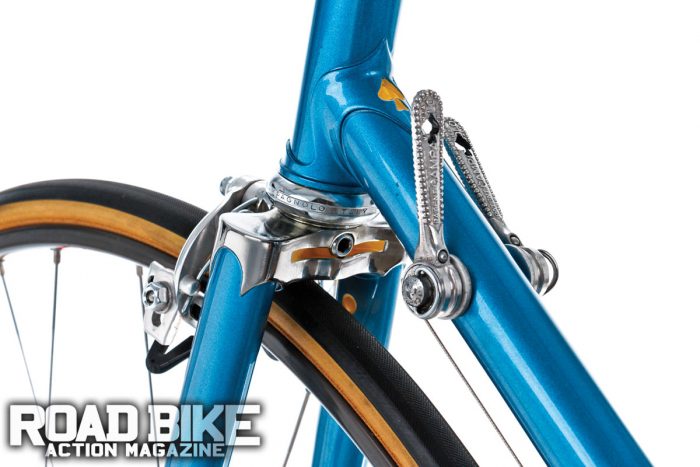 ITALY, OF COURSE
Born and raised in Italy, Mario Confente was a racer who made ends meet building frames in his home workshop. He built and raced his own frames, and then began to build frames for his teammates as well. Mario’s reputation grew thanks not only to his fine craftsmanship, but also the success of teammates and friends winning races and even world championships on his frames. Mario came to the U.S. in 1973 with Faliero Masi as a master frame builder for Masi Bicycles, overseeing the production of thousands of American-made Masi frames in their Southern California facility. Though successful in his work for Masi, what Mario really wanted was to eventually be able to build frames under his own name.

OFF ON HIS OWN
Mario’s chance came in 1976 with the support of a wealthy New Jersey businessman. Mario could finally produce frames that bore the Confente name, and they impressed immediately, drawing considerable attention at California bicycle shows. The fit and finish were impeccable, and Confente charged over twice the money of other top-end American builders for a frameset. It rubbed some the wrong way, but others, like renowned American builders Tom Kellogg and Ben Serotta, commented that it was obvious that Confente frames had simply raised the bar.

His goal was to combine American-quality manufacturing with Italian looks and style. He was also one of the first to develop and experiment with investment-cast lugs to produce higher-quality lugs and speed up production. Confente also experimented with other small things that we now see as commonplace on modern bicycles, like recessed bolts, cables routed under the bottom bracket and drilled chainstays to run the cables internally.

A TURN IN THE TIDE
But, unfortunately, Confente as it was wouldn’t last. Unbeknownst to Mario, his financial backer made plans to launch a budget frame company, Medici, using his designs and capitalizing on Mario’s name and innovations. When Mario learned of the plan, he refused to sign on, seeing Medici as an inferior product and a dilution of his vision. So, he was fired, and immediately he was locked out of his own workshop. Orders for Confentes were left unfilled and no more were built. Mario was exiled from his own company and not even allowed to retrieve his own tools from the workshop. For the next year he soldiered on, working various jobs to save enough to rebuild his business.

“They’ll call Confente the Holy Grail of vintage bicycles and draw comparisons to the likes of a rare Stradivari violin.”

Sadly, before he could, he died of heart failure outside his home in 1979. The new workshop he was building in his garage was left incomplete, with many of the tools, lugs and other artifacts he’d amassed sold by his distraught new wife who had suddenly become widowed. The only thing left of his legacy were the small number of frames he’d already built and delivered. His story is one of betrayal and heartbreak. His struggle to realize his dreams against forces he could not control has become something almost mythical in the lore of American frame-building and is partly why the Confente frames that survive are so special.

WHAT ABOUT THIS BIKE?
This Confente Pro-Strada road frame is number 47 of 135, and it sports plenty of bespoke details. Like other Confentes, it’s a bike that doesn’t scream for your attention. Instead, it just asks for it respectfully. It displays its Italian leanings with a Campagnolo Nuovo Record gruppo, with the addition of a Campy Super Record rear derailleur and a Cinelli cockpit. The frame is adorned with Mario’s playing card “spade” logo, pantographed into each perfectly brazed lug and accented with yellow paint. The vent on the underside of the bottom bracket is shaped into a spade as well, and a neat row of multicolor spades are pantographed onto the face of the Campagnolo brake levers. 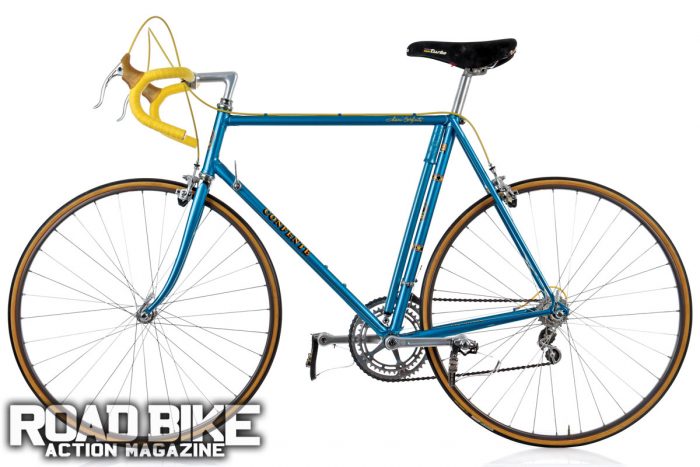 These levers also have neat triangular sections milled out of their sides and painted for a tiny bit of extra style. The brake calipers are mounted with recessed bolts, giving an extra-clean finish to the frame, especially with his bespoke chromed fork crown and reinforced rear-brake bridge. Small dots are pantographed onto the brake bridge, and the cable transitions brazed onto the bottom bracket shell are a subtle little flourish. On certain frames Mario was known to even add such dots on the downtube braze-ons, a little treat for anyone willing to take the shifters off and have a look.

As with any vintage bicycle, the Confente is not immune to the forces of time and aging. The original saddle, chain, freewheel, wheels and tires have all been replaced with slightly newer components to keep the bike in rideable condition. The pump is also of a slightly later vintage, as the original would have had painted bands with spades to match the seat tube. In accordance with the trends of the time, there are no seat tube bottle-cage mounts. In the ’70s, clean lines and bottle hand-ups were the way to go. The paint is mostly still original and in great condition. There are delicate little cable guides brazed onto the top tube. These guides were made so tight that it was near impossible to run cable housing through them. 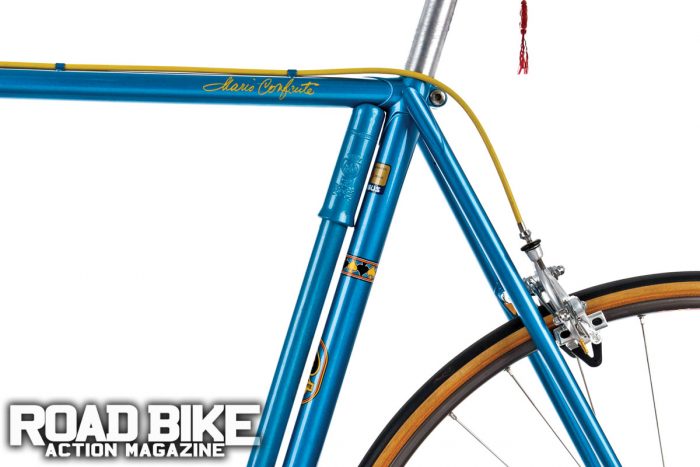 When building a frame, Mario would ask the customer what housing he wished to run and then deliver the frame with the housing already in place. Repainting of the frame would generally necessitate their removal, so it’s a good sign that they’re still intact.

THE TOLL OF TIME
The bottom bracket area by the chainstays, however, did need to have some touch-up work done. Fortunately, the owner was able to secure Jim Cunningham of CyclArt in California and the original painter of Confente’s frames in the ’70s to do the touch-up work. One interesting addition are the spades milled out of the center of the shift levers. Upon examination, Rich Gangl, a Golden, Colorado, frame builder who worked with and was close to Mario, concluded they were not his work. “If Mario did it,” he says, “they would have been bigger and perfect looking.”

These spades are a bit rough, asymmetric and seemingly filed by hand—likely one collector’s DIY addition to the bike. Gangl also pointed out a small spacer on the drive-side bottom bracket cup. This was likely added to help the 42t inner chainring clear the chainstay, indicating that the frame may have been designed around a smaller chainring as Mario would have “never let a bike leave the factory in such a state.” It’s indicative of the precision and attention to detail Mario put into his builds. Such small faults are trivial, though, on such a valuable bike and unlikely to truly affect the value. 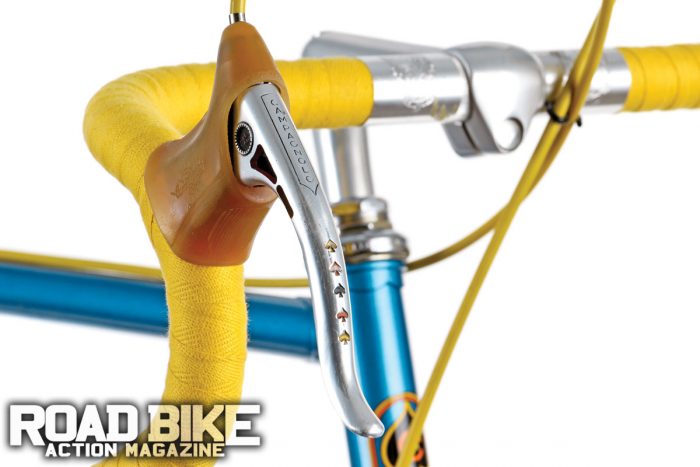 Though his career was brief, Mario Confente’s impact on the cycling industry is undeniable. He helped push standards for frame building higher with his style, craftsmanship and innovation. To a casual observer, it may be hard to look at a Confente frame and truly understand its value. This is a frame that stretches beyond the norms of excellent craftsmanship, and even beyond the rarity. There is a certain romance to a Confente. In learning about Mario and his brand, it becomes hard to separate the man from the frame. They become like tragic effigies of his ambition and future, bottled up inside lugged steel, the last vestiges of a vast potential squandered by fate. 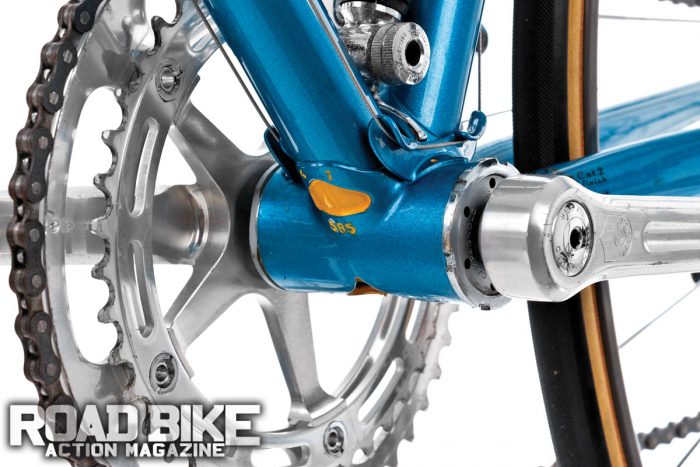 To see a Confente frame up close is to see his passion, still glowing like a torch, a ghost still brazing beautiful frames in its ephemeral struggle against the withering of time. No other frame or frame builder has this strong of an aura surrounding them. Great craftsmen may, in some small way at least, wish to live on through their work. But, in the great pantheon of builders and frames, there’ll only ever be one that can live on like a Confente does.