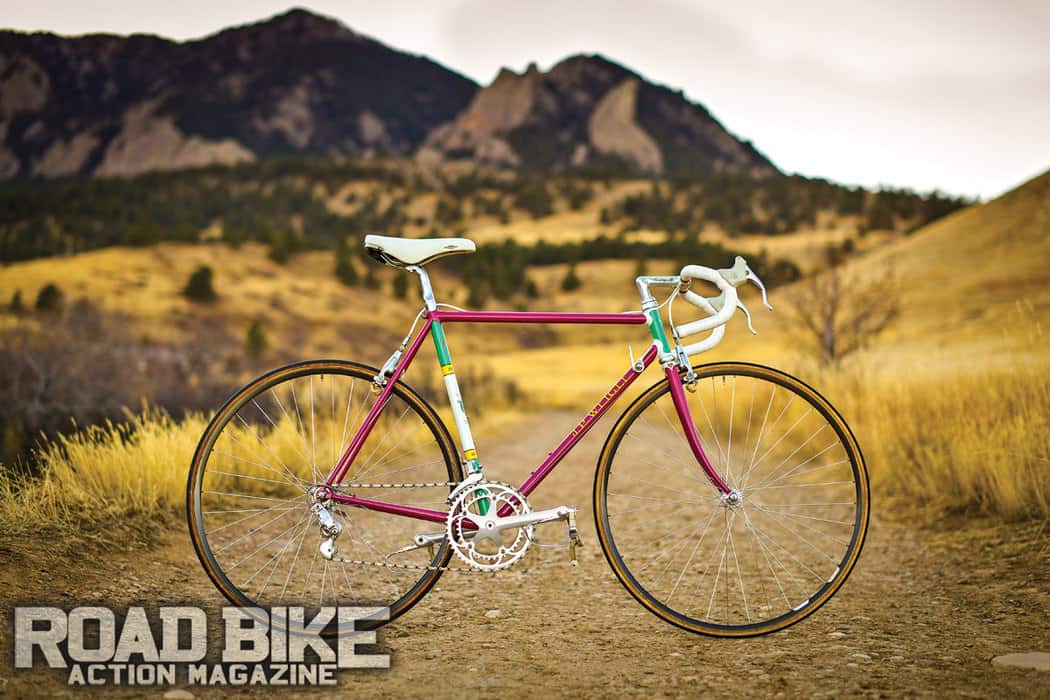 In 1985, Bicycling Magazine printed a two-page centerfold titled, “The Dream Makers,” featuring beautiful handmade dream bikes designed to satisfy the tastes of any ’80s cyclist with money to burn. At the forefront, it featured bikes by some well-known builders, but tucked away to the side was a pink-and-green bike built by a much smaller and low-key builder that caught the eye of a magazine specializing in a very different type of centerfold.

Of all the featured bikes built by the so-called “Dream Makers,” Hugh Hefner’s Playboy selected this J.P. Weigle Special for its annual “The Best” list as “The Best Custom Bike.” A unique honor for any bike, it shared the page with “Best Robe” and “Best Hotel Suite.” To be featured in Playboy may not seem as respectable as a cycling publication, but Playboy actually did manage to capture what makes the J.P. Weigle Special a special bike. “The best,” they say, “isn’t ostentatiousness or glitz. The best is style and innovation, originality and execution. The best, above all, is class.”

J.P. Weigle has its origins on the East Coast. The brand’s namesake, Peter Weigle, never dreamed of being a frame builder. As a young man, he didn’t even know such a thing existed. But in the ’70s he interviewed for “an interesting opportunity” and ended up being hired by Witcomb USA. He was sent to England for a seven-month work-study program at Witcomb Lightweight Cycles, which would qualify as the oldest of old school. There were no jigs or machinery, no alignment table. He learned with hand-spun drills, hacksaws, files, and used a keen eye and sheer grit to build his frames.

After his stint in England, he returned to Connecticut to work at Witcomb USA, racing as much as he could, and building alongside up-and-coming builders Richard Sachs and Chris Chance. When Witcomb closed in 1977, Richard Sachs had already ventured off to build frames under his own name, and Chris Chance started his own company, Fat City Cycles. At this point, Peter thought it might be time to get a “real job.” Fortunately for us, he kept building frames. He purchased one of Witcomb’s discarded jigs and began working out of a humble Quonset hut stationed at an airport. 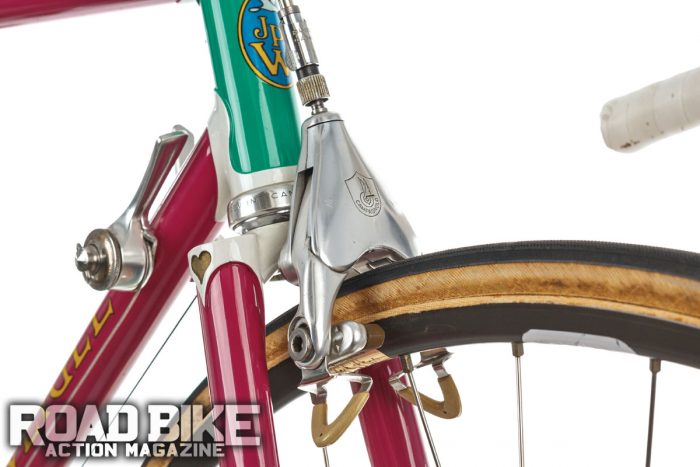 This J.P. Weigle Special was originally built to be displayed at the New York International Trade Show. It featured some of the most modern building techniques of the time. The lugs, fork crown and bottom bracket shell are all investment cast, the same way a piece of jewelry would be produced.

“There were no jigs or machinery, no alignment table. He learned with hand-spun drills, hacksaws, files, and used a keen eye and sheer grit to build his frames.”

The lugs feature J.P. Weigle’s signature heart cutouts, which Peter cut by hand. The bottom bracket vent is also hand-cut into the shape of a seagull, J.P. Weigle’s logo. All these are brazed to Columbus SLX tubing, released in the early ’80s as the pinnacle Columbus’ steel tubing. Something that will look familiar to most modern bike riders is the internal routing of the rear brake cable. Peter used a stainless steel tunnel inside the top tube to neatly route the rear brake cable and keep the lines of the bike clean and sharp. He also drilled the Cinelli handlebars to allow both brake cables to route through the back of the levers and exit by the stem clamp for that clean “aero” look. The cockpit was finished with a special engraved Campagnolo 50th-anniversary Cinelli XA stem. 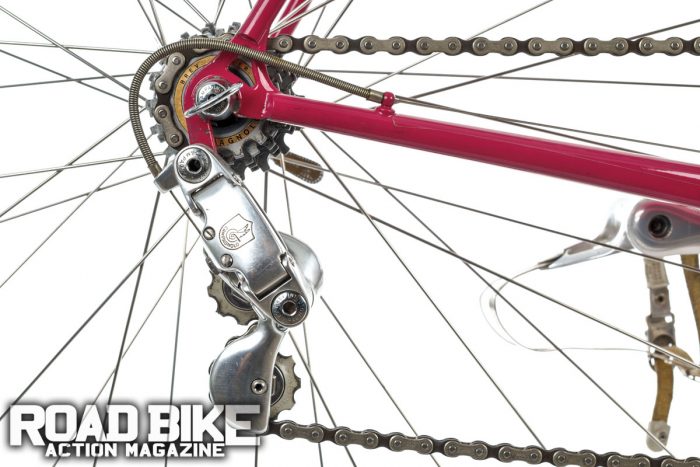 Campagnolo provided Peter and a few other builders preparing bikes for the show with prototype C-Record gruppos almost two years before they were made available to the public. C-Record had instantly recognizable lines that were thoroughly modern in that sleek, metallic ’80s way of the DeLorean and Robocop. Its party piece was the unique Delta brake, which used a mechanism in the form of an articulated parallelogram hidden in the Delta housing to actuate the brake arms. They were beautifully built and finished and, in Peter’s words, “A complete nightmare to set up.”

The first iteration of the Delta brakes were awkward, and many builders actually failed to get them to work properly. Peter, as a detail-oriented builder with a high level of patience, did manage to get his to work perfectly and feel rideable. However, the greater failing of the Delta was that the mechanical leverage of the brake wasn’t linear in nature. The leverage ratio increased progressively the more you pulled the lever, sending you suddenly into the lock-up zone when you least wanted it. 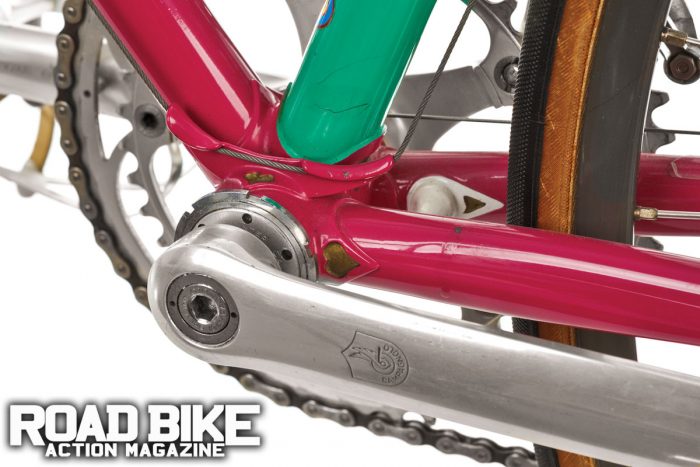 While some pros and engineers of the era saw the brakes as downright dangerous, for others, they still had their appeal. It’s hard not to be drawn to their stunning and unique shape and, following your heart like many legendary racers and builders have tended to do, choose form over function. The Special still feels perfectly rideable and just looks too good to be without them. Campagnolo did ultimately recall the first version of the Delta brake, but Peter never sent the brakes back, and original prototypes, like the pair on the Special, remain rare and highly desirable.

Beyond the prototype gruppo, what really stands out with the J.P. Weigle Special are its effortless good looks. As Playboy said, it’s not ostentatious or glitzy, and unlike other bikes from that era, it has no need to rely on loud, neon colors to attract your eyes. Its three-color scheme is simple, understated, refined and, most of all, it’s well executed. Close-up examination of the paint on the lugs reveals neat, perfectly edged lines between colors as the paint seamlessly transitions from tube to lug. It’s the result of a capable and steady hand and a time-consuming detail that few would undertake when just spraying the whole joint one color would be simpler. 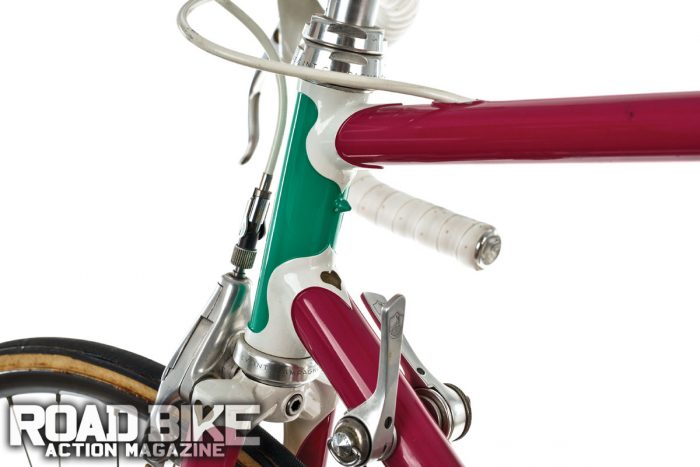 This same intricate care was put into painting the fork crown and even the bridges between the seat- and chainstays. It’s a simple detail that gives J.P. Weigle bikes their character. The most interesting thing, though, is that the Special’s paint job is a part of the bike that Peter actually wasn’t responsible for. On the back of the seat tube is a small insignia that reads, “Spray by Betsy.” Peter’s first wife was the one producing J.P. Weigle’s impeccable three-color arrangements. This is something that made the Special truly unique, and something Peter made sure to point out. She was a woman working in what was then (and still is) a male-dominated industry and doing it better than many others at the time. Peter said that after their divorce he was driven to despair trying to learn how to replicate her work, using toothpicks out of desperation to try and fix his mistakes. 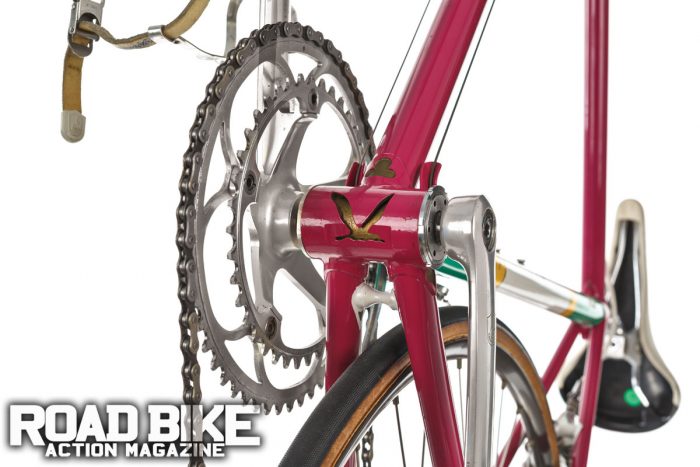 Today, Peter Weigle still produces frames by hand in his shop in Connecticut. He doesn’t have a website, and tracking him down required some detective work on social media.  Knowledge of his work seems to mostly be contained to a small, dedicated customer base, but they are all passionate riders who enjoy reveling in photos of each new build.

Over 30 years later, it’s safe to say that his bikes are still stunningly beautiful. Word on the street is that the wait time for a frame is simply “however long it takes for Peter to get it right.” “It’s all in the details for me,” Peter says. “Small things matter.”

What you get with the J.P. Weigle Special represents who Peter is as a builder. When it was created, the Special truly was, at least for that moment, the best custom bike you could buy. It’s not about flash or pomp, but good style, solid execution and a perfect display of class. It’s just a bike done right.

Photo of the Day: A Portrait of A Champion

Photo of the Day: The Master In Detail