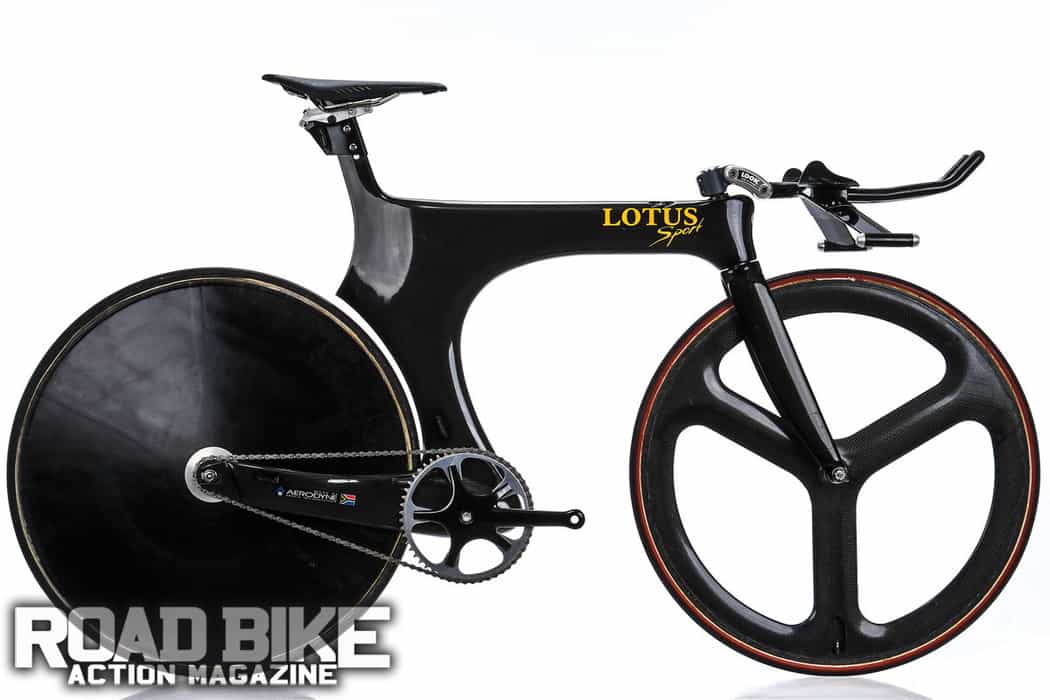 I remember the first day I walked into The Pro’s Closet and I saw the Lotus Sport 110 hanging up near the front desk. It was the first bike that caught my eye, and, for a few minutes, it was the only thing in the world that held my attention. The amount of excitement and nostalgia I felt seeing a Lotus Sport in the flesh surprised me. I remembered how, as a kid, I had watched the 1994 Tour de France on a grainy VHS tape. It was the first time I watched a pro race. My friend wanted to show me the wild, elbows-out sprinting technique of Djamolidine Abdoujaparov and the violent crash at the end of the first stage.

But, the thing that really ended up sticking with me that day was the image of Chris Boardman before the prologue, surrounded by cameras, sitting pensive and stiff in his Team Gan kit and Giro aero helmet. To my young eyes, he looked like a superhero from the future, and he had a bike to match—the Lotus Sport 110. It reminded me of my favorite airplane, the SR-71 Blackbird, which was built purely to be the fastest plane in the world.

Boardman rode perfectly that day. He pedaled like a metronome, caught and powered emphatically past his minuteman, and in the end averaged 55.152 kph, riding the fastest tour stage in history (Rohan Dennis has since won the prologue in 2015, averaging 55.456 kph, pushing Boardman’s result to second fastest). With that I was hooked. I went home dreaming of speed and knew I would be riding bikes and trying to go fast for the rest of my life. 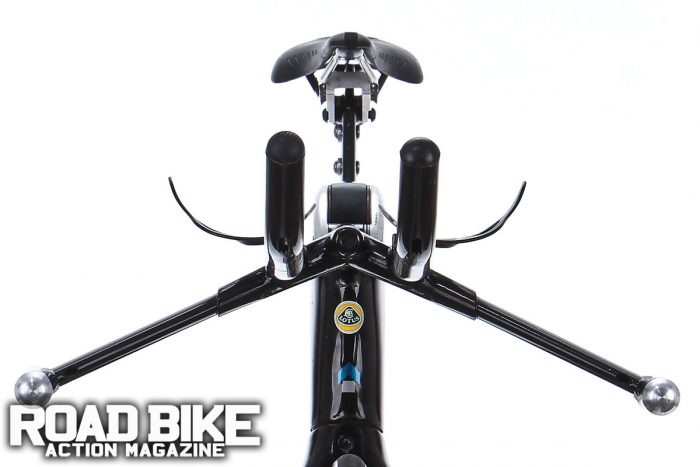 A LOTUS BY ANY OTHER NAME

There are few bikes out there that have left an impression on me like the Lotus Sport. The radical carbon Z-shaped frame was first developed by Mike Burrows, who understood the aerodynamic potential of sculpted monocoque frames. Lotus hired Burrows to help develop the bike after one of their test drivers, who happened to be an avid cyclist, stumbled upon the design when visiting Burrows’ shop. Thanks to their involvement in Formula 1, Lotus had extensive knowledge of aerodynamics and advanced composite technology and could provide facilities for state-of-the-art wind-tunnel testing and carbon fiber molding. They acquired the rights to the project in 1992, and the result was the first Lotus Sport, the 108.

“In a way, it really helped me dig deep as an athlete—that’s why I love cycling. It’s both machine and man meshed together.”

Boardman rode the Lotus Sport 108 to gold in the 4000-meter pursuit at the 1992 Olympics and set a world record. After Boardman’s success, Lotus saw the potential in marketing a production version, which then became the Lotus Sport 110. Lotus made a small batch, but contracted out the rest of the production to a South African company, Aerodyne Space Technologies, which had manufacturing ties to Formula 1. The main difference between the 108 and 110 was that the 110 doesn’t feature the radical “mono-blade” frame design of the 108. The 108 had a single fork leg and single chainstay on the right side to reduce the frontal area of the bike as much as possible.

The 110 keeps the general Z-shape of the frame, but for production purposes, Lotus opted to use traditional dual chainstays and fork legs. Still, when you look at the bike head-on, it’s incredibly narrow, measuring under 2 inches across. The 110 also featured interchangeable rear dropouts, which allowed you to switch between track and road spacing and added a rear derailleur hanger for road use. With brake mounts and internal cable routing, the frame was meant to be fully usable both on and off the track. 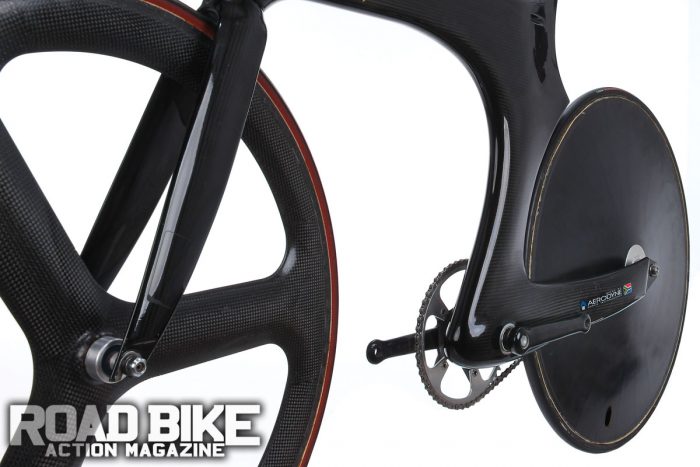 Boardman rode a version of the 110 to set the World Hour Record at a stratospheric 56.375 kilometers before the UCI rule changes essentially nullified the result. New frame designs, especially those aimed at timed pursuits like the hour record and road TTs, were, in the eyes of the UCI, getting out of hand. It was open season, and all sorts of wild body positions and frame shapes were being experimented with. The Lotus Sport sat at the pinnacle of this arms race.

The only other bike of the time that came close to its level was the GT Superbike, but it enjoyed nowhere near the same notoriety. To try and put an end to all this, the UCI drafted the Lugano Charter in 1996 (not approved until 2000), which outlawed radical aero designs like the Lotus Sport. Amazingly, the Lotus still compares very favorably to modern designs in terms of aerodynamics, which leads one to wonder where bikes would be today had regulations not stifled their progress. Nevertheless, the Lotus Sport remains iconic, and in the ’90s it was the undeniable king of speed. To have one, you had to lay down $3000 for the frameset, which seems incalculably inexpensive in 2017 terms!

Colby Pearce is a Boulder native and former professional rider and Olympian who did just that. The Lotus Sport 110 that’s now hanging at The Pro’s Closet was purchased at full retail in 1995. With it, Pearce set a new U.S. Hour Record in 1995, riding 50.191 kilometers in an hour on an outdoor track in Colorado Springs.

Although it’s over two decades old, the Lotus is still impressive to see up close. The carbon layup is flawless, and the clear coat is polished to a high-gloss finish. Weighing in at just over 18 pounds, the bike feels surprisingly solid and sturdy, not hollow or toyish. To help make up for the Z-shaped frame’s absence of a downtube and seatstays, the chainstays are enormous. Without them, it means that, in the simplest terms, the bike only has to break through the air twice, thus increasing its aerodynamic efficiency. The exposed bottom bracket shell is also shaped like a ship’s bow so that it can help smooth the air passing over the back half of the bike. 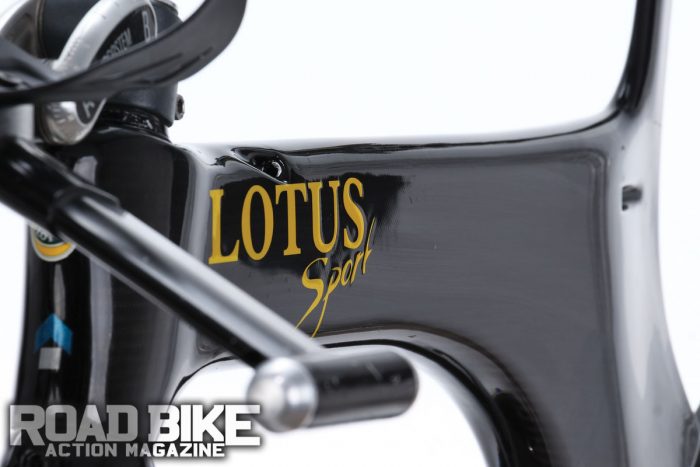 Installed in that bottom bracket is a classic Mavic 631 “starfish” crankset. Pearce had it painted black to match the frame, and if you look closely, you can see a slight bevel where the material on the ends of the crankarms have been filed off. This is because the 175mm cranks (most track bikes run around 165mm crank arms for clearance on banked track surfaces) don’t quite clear the massive chainstays. With the ends filed down, it provides just over 1mm of clearance, and if you push on the crankarm with enough force, it touches the frame.

This probably wasn’t an issue when Pearce set the U.S. Hour Record since he used one of the earliest SRM power meter cranks for the attempt. It was wired, and Pearce reportedly spent seven hours routing the wire through the internal front derailleur path to keep it looking clean. The frame has a braze-on for mounting a front derailleur, which has remained unused throughout the bike’s lifetime. In fact, even when riding time trials on the road, Pearce chose to stick with a single front chainring.

A TASTE OF HOMEMADE

The front wheel is a carbon HED 3, and the rear is a Kevlar Russian disc. These Russian discs are popular with track riders and usually have “666” written on them in Cyrillic-looking script. They are made using overlapping, tensioned sheets of Kevlar instead of spokes. Because these sheets are stretched like a drum head, the wheel is impressively loud when ridden, especially on the road, as it amplifies shifting noises and road imperfections. The Kevlar almost looks like dark woodgrain as it ages, but, like the crank, it has been spray-painted black to match the bike. The hub hardware is all machined from titanium, and the end result is a wheel that is extremely light. It is, however, quite flexy under high power, so it’s much more suited to sustained, uniform efforts (like the hour record) rather than sprinting.

At less than 9mm thick, the integrated seat mast is surprisingly thin but still very stiff. An interesting design choice is the mechanism on the machined seat-mast cap and saddle-rail clamp. The cap has two bolts, and to mount it to the frame, holes actually had to be drilled directly into the seat mast. You can see that two holes have been slightly ovalized with a drill to provide a very small amount of saddle-height adjustment. The seat-mast cap is further secured to the frame with a pair of set screws that simply screw in until they contact the seat mast and hold everything stable with friction. The saddle-rail clamp is milled from a solid block of aluminum, and instead of a traditional-style clamp, it simply uses four bolts to wedge the saddle rails between the bolt heads and some tabs machined into the block.

“Looking over the bike brings to mind a machine whose legacy, like the SR-71 Blackbird, has come to outlive its own relevance.”

The cockpit has custom, one-piece alloy Vision Tech aero bars that are very narrow, measuring only 38cm outside to outside. The adjustable Look Ergo stem allowed Pearce to get the bars low enough to run an ultra-aero position where the bars sit almost in line with the top tube. On Boardman’s bike, the bars were attached directly to the fork crown, giving him a similarly low position, but for the production version, a more conventional threadless stem setup was preferable. 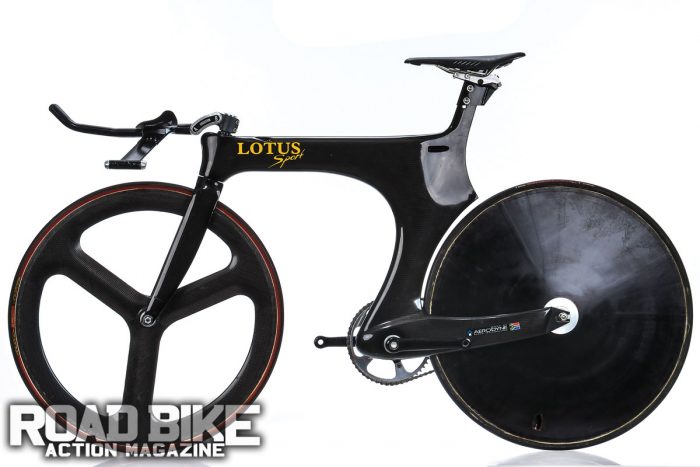 In talking to Colby, he remains fond of the bike that brought him his record. It simply epitomized speed, and it had some sort of special effect on the rider’s psyche. Pearce describes this effect well: “There aren’t many bikes that I have an emotional attachment to. A bike is a tool that I use,” he says, “but this one, it came at a special time in my career where I felt like I really rose to the best of my own abilities, and this bike helped me do that. I don’t know whether or not it was because I had a faster bike than a lot of other guys, or whether that speed inspired the best out of me. Because you’re on this super-fast bike, you don’t want to look like a dope and get beat. In a way, it really helped me dig deep as an athlete—that’s why I love cycling. It’s both machine and man meshed together.”

Looking over the bike brings to mind a machine whose legacy, like the SR-71 Blackbird, has come to outlive its own relevance. It remains an artifact of a time long past that gets forgotten more and more with each day, but the quest for speed is eternal. Though grounded and kept on display, the Lotus Sport 110 will always have that aura of being—at least for a time—the fastest in the world.

Tour Down Under Stage 1

Ben Serotta and the golden age of American cycling