INSIDE THE PRO’S CLOSET: ’89 Colnago 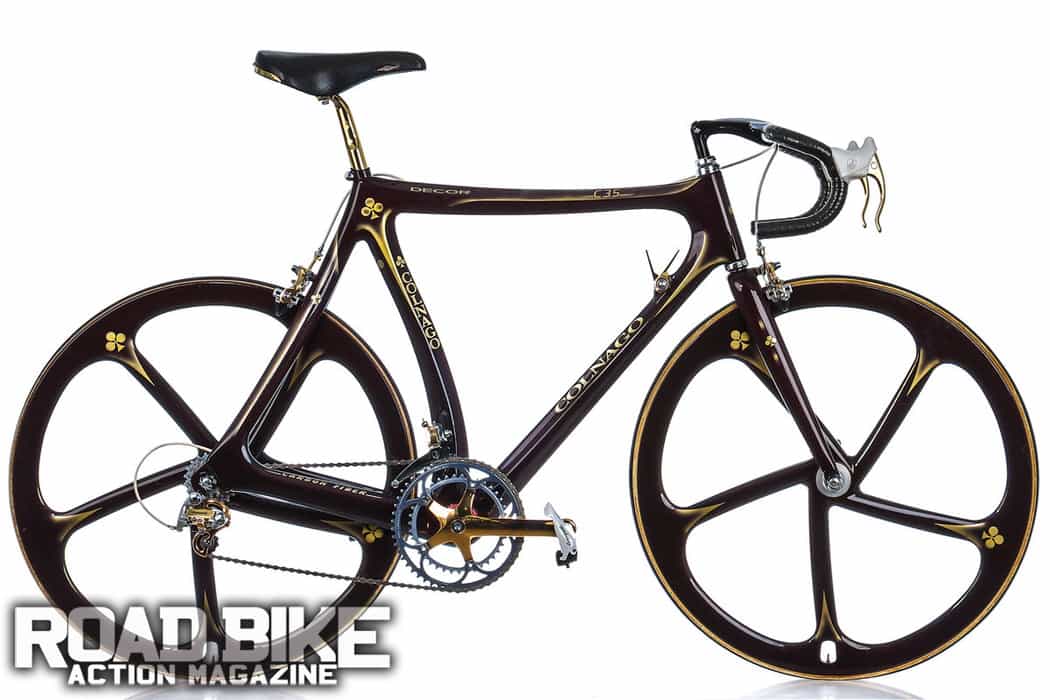 Throughout the 1980s and ’90s most people in the bike industry considered carbon fiber to be a space-age material better reserved for jet planes than bikes. In a few (really) forward-thinking frame shops, however, carbon was just beginning to extend its fingers into the realm of possibility. Lighter and stronger than steel and able to be molded into any shape you could imagine, as a building material, carbon was akin to a type of black magic that could produce tantalizing results; however, it’s just as capable, too, of harrowing failure.

But that was then. Today, every major bike manufacturer uses carbon throughout their bike lines. And given carbon’s proven weight-to-performance ratio, the material has overwhelmed the pro circuit with more parts made with it found on every race bike than not. 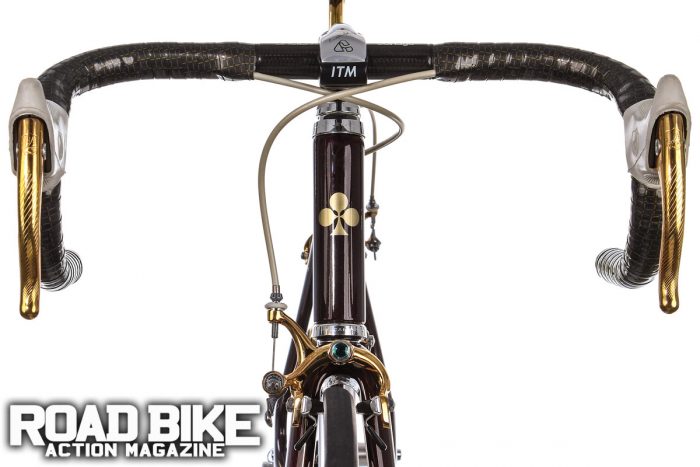 Everyone riding a modern carbon bicycle today—from budget-friendly entry-level rigs to ultra-light aero race machines—owes a debt to the innovative and daring bikes that helped paved the way decades before. Of the handful of pioneering carbon bikes of the era (chiefly Look, Calfee and Kestrel), none of the progenitors come across as stunning as the Colnago C35.

Released in 1989 to commemorate Colnago’s 35th anniversary, while it was neither the first carbon bicycle, nor the best, it was certainly the most ostentatious. In a museum full of beautiful vintage bikes, the C35 stands out with its curving, sculpted lines; deep burgundy paint; and special gold-plated Campagnolo components. Sure, some may see it as gaudy, but it exhibits that special, excessive Italian flair that treads the line between eye-catching and eye-melting. But, no matter your opinion about its appearance, there’s no denying that this bike demands your attention.

The C35 was Colnago’s first production carbon fiber bicycle. New technology is always rough around the edges, and it is only through the persistence of dedicated pioneers that it can evolve to gain acceptance. Carbon fiber was no exception. Ernesto Colnago, Colnago’s founder and namesake, was one of the few who first recognized the material’s potential for frame building and was already experimenting with it in the early ’80s.

“The C35 supposedly won races in its day, but its racing pedigree is of little importance for such a unique bike.”

In those years before computer-aided design and lightspeed, quick Asian manufacturing, building with carbon involved lots of slow trial and error. With no prior examples of carbon frames to build upon, Colnago tested different molding techniques, manufacturing processes and carbon layups frame by frame, and produced plenty of duds in the process.

In 1981 Colnago unveiled his first rideable concept, the CX Pista, a track bike with the world’s first full-monocoque carbon fiber bicycle frame. Though it never went into production, its spaceship looks certainly drew attention and laid the groundwork for the C35 to eventually come into being. 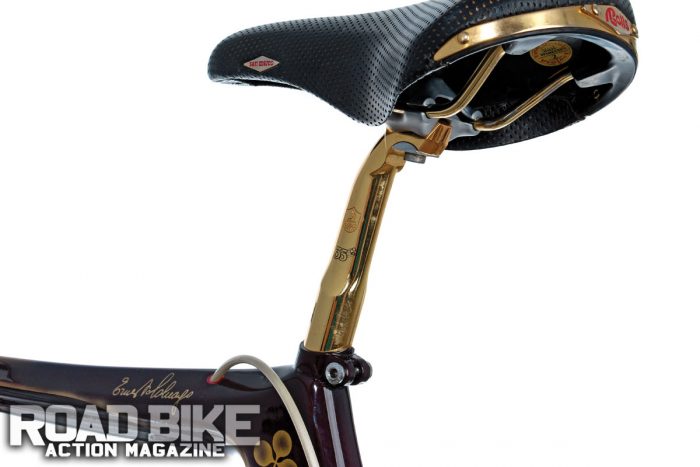 A few years later Ernesto Colnago approached the world-famous carmaker Enzo Ferrari to discuss the possibility of a collaboration. Ferrari had already been developing advanced carbon fiber technology and monocoque frames for its Formula One cars for several years, and, besides aerospace, F1 racing was the only other industry pushing carbon fiber development at the time. Enzo agreed, and Colnago received the help of the same engineering team working on Ferrari’s high-tech F1 cars. Through Ferrari, Colnago was also able to develop a relationship with emerging Italian high-tech company ATR, the company that supplied carbon to Ferrari and many other supercar builders.

With Ferrari, Colnago now had access to unmatched technology and manufacturing with the addition of the knowledge of their engineers. In 1986, the first product of this collaboration, the Concept, came to fruition but never saw production due to its weight and cost. Two years later the C35 arrived, and it immediately put carbon fiber on the radar of drooling cyclists everywhere.

Like its predecessors, the C35 had a full-monocoque frame where carbon impregnated with resin is layered and pushed into a mold with a bladder to cure into a single, solid piece. It is the same method used by every major manufacturer today to build modern carbon frames. In later years, Colnago did come to favor building frames using lugged carbon, a similar building method to traditional lugged steel, which allowed many different sizes to be produced (with monocoque frames, each size needs its own specific mold).

The wheels are also full-monocoque carbon pieces with hubs pressed and epoxied into them. Designed and custom-made by Ferrari, they feature a beautifully arching five-spoke design that complements the C35’s curving shape. They, of course, aren’t as light as many modern carbon wheels, coming in at just over 2000 grams, but, thanks to their beefy one-piece design, they are plenty stiff. The frame and wheels are color-matched with translucent burgundy paint that shows off the carbon weave on the surface and finished with finely airbrushed gold accents.

“Designed and custom-made by Ferrari, they feature a beautifully arching five-spoke design that complements the C35’s curving shape.”

A notable design feature on the C35 is its innovative straight-bladed fork. In their testing and experimentation, Ernesto Colnago and the Ferrari engineers happened to discover that a traditional curved fork didn’t absorb vibration and shocks as well as a straight-bladed fork, which went against the basic intuition at the time. Colnago became the first manufacturer to switch to straight blades when they released the Precisa fork in 1987, which later went on to win Paris-Roubaix twice under Franco Ballerini. Not only did straight forks perform better, but they also were advantageous for carbon manufacturing because the carbon was easier to lay up. 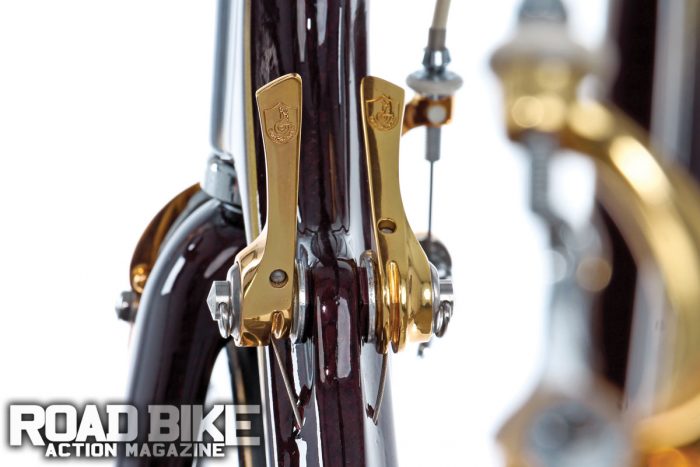 IN NAME AND DEED

This particular C35 was an Oro (Italian for “gold”) version, one of the rarest models, which featured a rare gold-plated Campagnolo C-Record gruppo. The number “35” is pantographed onto the brake levers, crankarms, front derailleur and seatpost to commemorate Colnago’s 35th anniversary.

The brakes are gold-plated C-Record Cobalto calipers. The Cobaltos were a standard single-pivot design Campagnolo introduced into the C-Record line after recalling the first-generation Delta brakes. They are essentially Super Record calipers with a cobalt-colored stone set into the recess of the mounting nut, thus giving the brakes their name. The Cobalto brakes were only intended as an interim solution while the problematic Delta binders were sorted out and are thus quite rare on their own. The even rarer gold-plated versions have been previously sold at auction for up to $500 a set.

The C35 supposedly won races in its day, but its racing pedigree is of little importance for such a unique bike. It’s not a bike that you’d necessarily want to ride. Valued at nearly $20,000, the C35 Oro is easily one of the most valuable bikes in the Pro’s Closet, and it’s in exceptional condition. It has spent most of its life hanging on display in Vecchios Bicicletteria, a local Boulder shop. The tires are original and, unfortunately, no longer hold air, and the chain comes perilously close to slapping the clear coat off the chainstay in the highest gears.

The paint is original and exceptionally clean for its age, all the components are near flawless, and the unmarred brake tracks on the wheels reveal the bike’s pampered lifestyle, which it has deserved.

The Colnago C35 is a truly special bike that ignites the imagination. Equal parts art and engineering, it is a bike that must be stared at with every opportunity. That’s what the C35 is—a piece of cycling history, a bike that set new standards for what a bike could be and paved the way for what bikes would become.