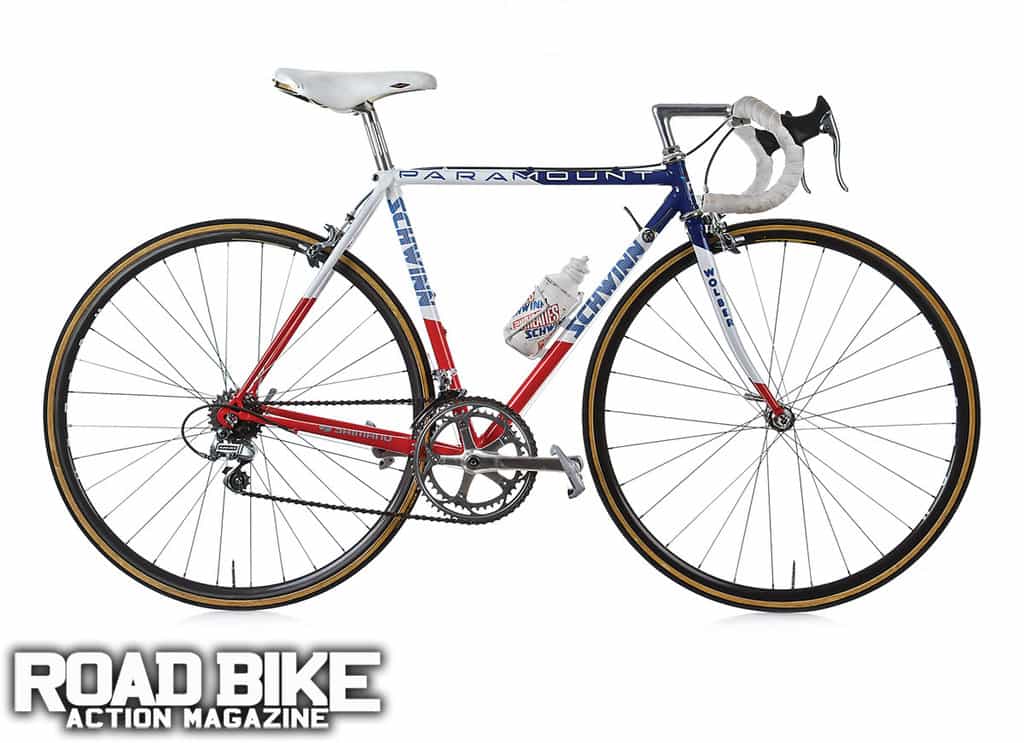 Arising from a landscape drenched in dust and sun came two riders, set against sheer cliff faces and decaying sandstone pillars. The two battled wheel to wheel like storybook heroes—one towering and powerful, the other slight and spry. They were American Roy Knickman and Irishman Alan McCormack racing at the sharp end of one of the 1988 Coors Classic’s premier stages, the Tour of the Moon. They broke away together over 50 miles from the finish, riding together up the final climbs, leaving the peloton behind, suffering in the arid alien landscape that gives the stage its name.

The end came down to a sprint, and McCormack, saving his energy, cleverly sat on Knickman’s wheel until the last possible moment, then swung out alongside his rival and flicked the bike past him at the finish line. This was the very moment McCormack’s bike was built for, the point in the race when acceleration and maneuverability converge into a perfect victory. The bike in question is Alan’s custom-built 50th Anniversary 1988 Schwinn Paramount.

Alan’s Schwinn Paramount was built based on the geometry of a bike he had enjoyed racing in England. When Alan first brought his desired dimensions to the Schwinn boys in Chicago, he was met with some skepticism. “They thought I was nuts,” Alan says. “They thought I was drunk or something.” What Alan wanted geometry-wise was taken to the extreme: super-steep angles, a super-short top tube, a super-short wheelbase and super-short chainstays. This resulted in a bike with generous toe overlap, enough that the front wheel would actually contact the pedal in the 3 o’clock position.

Alan knew, though, as any rider who’s spent significant time on a smaller bike will, that overlap doesn’t matter unless you’re riding at parking-lot speed, and he rarely was. This bike was meant to be a criterium specialist. High-speed racing would be its bread and butter. Though the builders were hesitant, with some continued persistence, Alan finally got what he wanted.

Alan’s favorite races in America were always the fast criteriums. “I wore people out in the fast corners,” Alan says. With his slight build and penchant for sprinting, he took advantage by diving in fast and accelerating hard out of corners. This is where the short geometry came into play. Alan purposefully designed the bike to help him “flick” his opponents. The shortness of the bike also gave Alan another advantage. In the days before carbon fiber, with its tunable ride characteristics, short also meant stiff. Take two pieces of the same steel tubing with the same wall thickness, and whichever one is cut shorter will be stiffer.

Those short chainstays not only helped the Schwinn maneuver through fast corners, but they also helped Alan transfer his power to the ground. “This bike corners better than the bike I have now,” Alan says. But, the trade-off for stiffness, of course, is a less compliant ride. “It will beat you up,” Alan says, “I feel everything on the pavement.” But that didn’t stop Alan from doing everything on the bike, including time trials, stage races and winning long stages like the Tour of the Moon.

Alan said he prefers 165mm cranks to give it a bit more ground clearance for pedaling through corners. To compensate for the short 50cm top tube, the bike has a relatively long 140mm stem. The drops almost reach the top of the tire, giving Alan a low and fast position. He praises the Wolber tubular tires and rims, and credits them for helping him ride hot into corners, diving up the inside of the likes of Bob Roll and Davis Phinney in sprint finishes.

A fan of Shimano drivetrains, Alan’s Schwinn is equipped with Dura-Ace 7400. “Click, click—great!” he says, flicking the shifter. “I’ve never slipped a gear with this.” Even nearly 30 years after the bike was built, the shifting is still crisp and positive.

Alan was reunited with his old race bike years after he quit racing when the collector who acquired it brought it to the Boulder stage of the USA Pro Challenge and returned it to him. “I don’t know how he got it,” Alan says. “He just gave it to me. He said, ‘Just promise me you don’t sell it and you ride it as often as you can.’ And I still do ride it.” The bike now resides in The Pro’s Closet Vintage Bicycle Museum, proudly displayed above the front desk. Alan still takes the bike out regularly for Boulder group rides, and its racing pedigree can definitely be seen when Alan turns on the gas and flicks it to the front, just like he used to.

Ben Serotta Is Ready To Build Your Next Bike