Inside Velo Wrap: Put Away The Paint Gun

Easier and lighter than repainting your frame 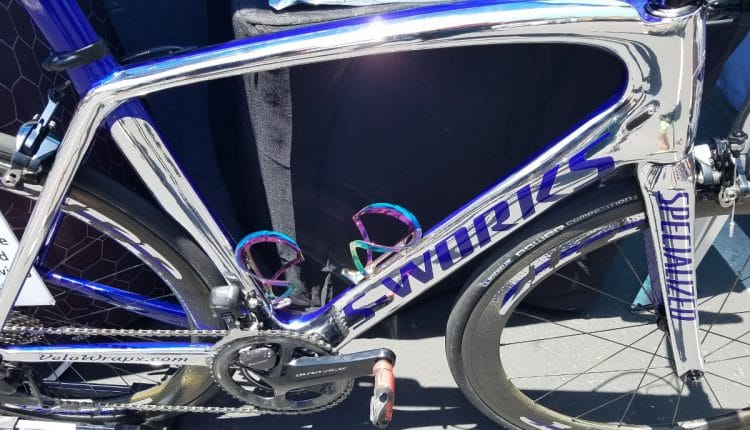 Share
While we were walking through the expo at the Belgian Waffle Ride earlier this year, we came upon one of the fanciest paint jobs we’ve seen on a bike of late.  However, upon closer inspection we learned that, in fact, it was not paint job at all. It was a vinyl wrap and avid cyclist and car buff Tory Gillett was the man who made it happen.

“I been racing bikes for years, in many states and countries and meeting many people along the way and seeing new trends. To support my habit I have an important role for a company that is very driven and has a NASCAR and F1 team. The Velo Wraps story started in late 2018 when I got a new bike that I really liked but the paint job just wasn’t me. What I wanted was a paint job like one I found in Trek’s Project One catalog, but I couldn’t afford the $2000 price tag I got from a local painter. I knew then there had to be a less expensive alternative.
“Eventually, I turned to my friend Simon Hartley who has his own wrapping business doing custom decals for cars. He’s been in the vinyl business for almost 15 years. He did the rally stripes on my new Challenger with such attention to detail I knew he was the guy. After a bit of nagging I got him to do a prototype we call the VF1 for very first one. It took us five hours to do that first frame. When it was complete, I was blown away. Anyone who saw it could not believe it was a wrap! They all said, “cool paint.”
“Every conversation turned into, well actually …it’s a wrap. At that point I knew we were onto something. I did a little more research and found advantage after advantage over paint. For example, the frame is exactly like it was before it’s wrapped so when you’re tired of the color you peel it off with no damage to the frame. Another benefit is helping avoid those paint chips by having vinyl wrap as a barrier around the frame and fork. I also learned that paint weighs more than vinyl and a typical bike is between 35-70 grams of weight added by a wrap.
“Remember that most when you get your framed re-painted most painters paint over the bike to avoid stripping it off and both practices void the warranty. Vinyl wrap doesn’t void your warranty.”
www.velowraps.com