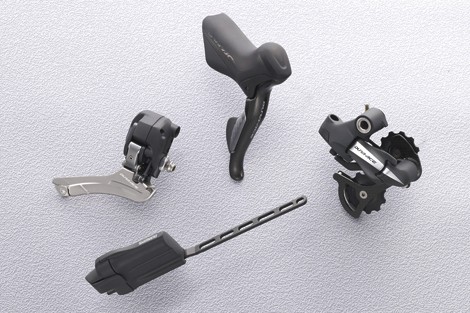 Shimano’s Di2 is unapologetic, expensive and targeted at road racing’s most elite membership. Dura-Ace, after all, is that company’s no-compromise racing ensemble, and Di2’s servo-driven electronic shifting represents the pinnacle of its present development. To this end, most Di2 customers will receive their electric-shifting bicycles tuned and ready to ride. Di2 is not a stand-alone component ensemble-it is designed to be an upgrade to its more conventional 7900 mechanical group. It stands to reason then, that some Di2 customers will purchase the parts and install them at home. Shimano’s Devin Walton dropped by to explain the nuances of Di2, and with him came technical ace Chad Fetterhoff. The idea was to transform RBA’s Dura-Ace-equipped Specialized Tarmac into a Di2 superbike. Fetterhoff would do all the work, and we would learn the idiosyncrasies of Di2 along the way. 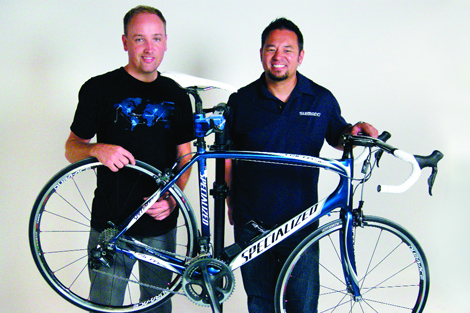 Chad Fetterhoff (left) and Devin Walton stand beside the Finished Di2-equipped
Specialized Tarmac. Read on and see how it’s done.

WHAT Di2 REPLACES
At minimum, you’ll need to remove your handlebar tape, 7900 Dual Control brake levers, cables and housings, and both the front and rear derailleurs. Some smaller bits also need to come off: you won’t be needing those threaded cable adjusters (Di2 adjusts electronically), and the bottom bracket cable guide is replaced by a Di2 wire junction box. While we were removing parts, Shimano upgraded our stock handlebar setup with its one-piece Evo Carbon Pro Stealth ensemble.

While you have the wrenches out, Shimano recommends that you remove the 7900 crankset to make it easier to access the chainring side of the frame in order to route the wiring harness to the rear derailleur. More about that later.

MOUNT UP
With the frame and bars stripped and ready, install the Di2 derailleurs and tighten between five and seven Newton-meters. Next, install the brake levers in place on the handlebar and position them so that the hoods line up with the flat plane of the bar. With all the hardware in place, next connect all the bits with the Di2 wire harness. 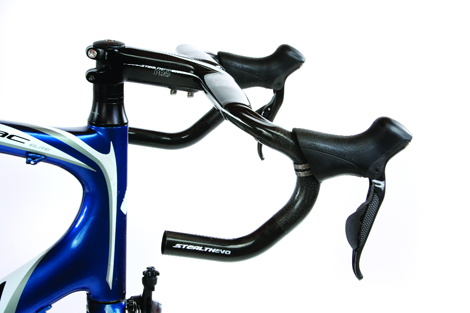 Install Di2 levers so the hoods are a seamless extension of the handlebar’s flat sections.

At present, Shimano offers two wire harness lengths. First, mount the tongue of the battery box under the downtube water bottle cage, and then plug in the front and rear derailleurs. Plugs and sockets are marked with a raised indicator so you won’t bend the gold-plated connector pins inside the sockets. Each run of wire is marked with a tag: ‘RD’ goes to the rear derailleur, and so forth. Shimano advises to snap the wire into the frame’s slotted cable housing stops where this is possible and provides adhesive-backed strips with molded-in wire tunnels to route the harness beneath the down tube and back to the rear derailleur. 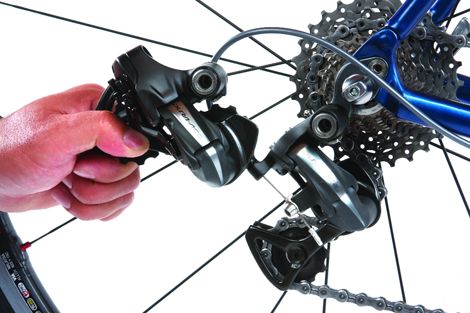 The Di2 rear derailleur compared with its mechanical predecessor underscores how compact Shimano’s electronics are. 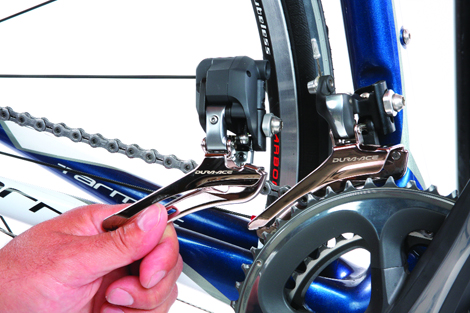 With the harness dangling and the derailleurs plugged in, you’ll have surplus wire, which will be wrapped upon itself and tucked into Shimano’s B-Junction Box-a plastic device which replaces the bottom bracket cable guide and has a series of grooves to weave and stow excess wire. Leave a four-inch pigtail extending in front of the head tube (where the lower wire harness will connect with the handlebar controls) and arch the rear derailleur wire where it connects to assure that the derailleur body can swing through its full travel during shifts and wheel changes. 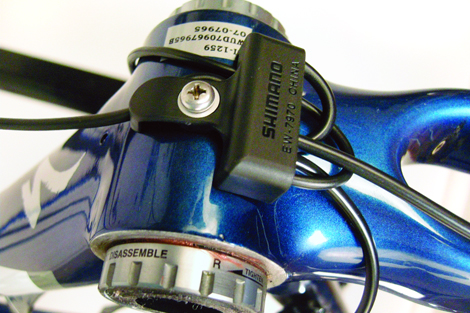 The B-Junction Box is where the excess cable is hidden. (You may need to drill a hole to mount it.)

TAPE UP
Clean the frame with isopropyl alcohol where you plan to apply Shimano’s wire tape, and then route the wires as shown: battery wire down the left side of the bottom bracket to the junction box; front derailleur wire up the right side of the bottom bracket; the rear derailleur below the chainstay; and the handlebar control wire is taped beneath the downtube. Use small zip ties at the end of each tape run to prevent peeling in a crash. 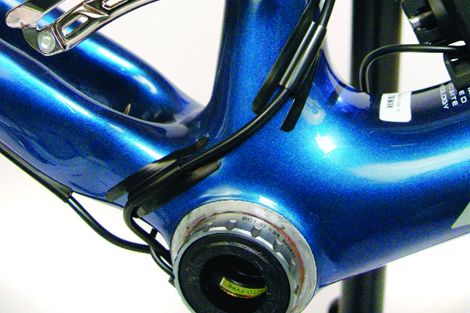 Use Shimano’s supplied tape to route the wires around the bottom bracket and under the frame tubes.

WARNING
Shimano’s number one Di2 warranty complaint stems from customers who pull the waterproof cable connectors from the derailleurs by yanking the wires, instead of using Shimano’s special tool. One side has a C-shaped device for prying the connector off, and the other end is an installation tool to connect the control wires to the Di2 brake levers-it’s included with the Di2 kit, so use it. 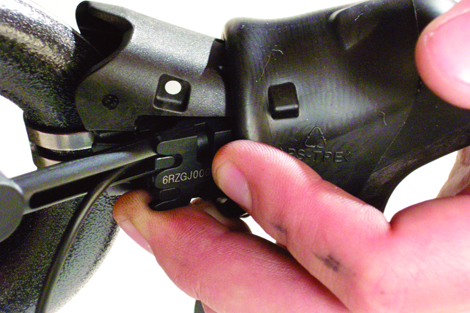 Flip the brake-lever docking plate open and use Shimano’s plug tool to insert the wire harness into the upper socket. The lower socket is for an additional TT shifter.

BRAKE LEVER DOCKING PLATE AND: ACTION!
Fold back the Di2 brake lever hood to discover the hinged docking plate on the inside of the perch. Capture the plug with Shimano’s insertion tool and snap the plug into the socket. The second socket in the docking door facilitates the use of a remote shifter for TT and triathlon clip-on bars (Di2 will shift electronically from both positions). Snap the docking door back in place. Connect the handlebar wire harness to the pigtail on the downtube and then click the battery into place. If all is well, when you tap the Di2 shift paddles, the derailleurs will jump into action. 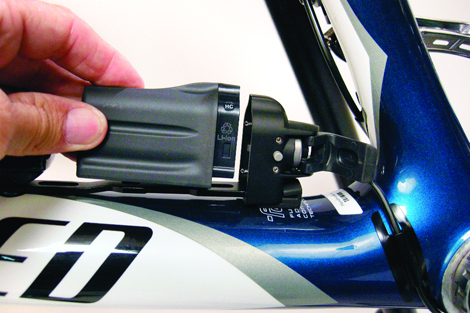 Connect the battery to the box, and then snap down the retainer lever. The button beneath the lever is a safety mechanism that prevents the battery from falling out. 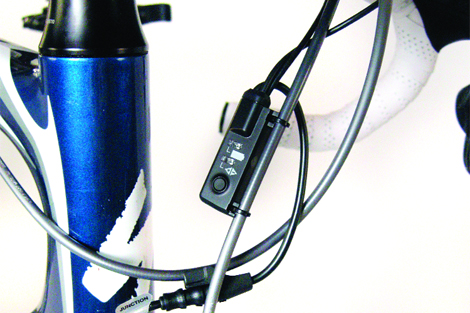 Use small zip ties to attach the A-Box and route the control wires along the brake cable housings.

FINISHING UP THE HANDLEBAR AREA
Both the Di2’s brake housings and control wires are routed beneath the handlebar (Shimano’s carbon Evo bar has a molded tunnel to facilitate a clean passage). After you install the brake cables and housings, route the control wires along the brake housings with a few zip ties, making sure that the LED indicators and buttons of the small control box (Shimano calls it the A-Box) are facing upwards. Shimano advises that you loop excess control wire beneath the apex of the bend where it curves into the flat section of the bar and fix the loop with electrician’s tape. Turn the handlebar in both directions to ensure that nothing binds, and then tape up the handlebar. 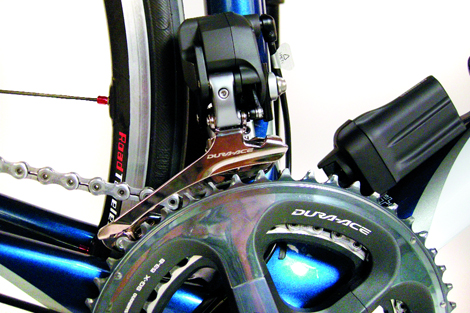 AND NOW, THE FINAL ADJUSTMENTS
Throw on your crankset, wheels and chain, and prepare to make some final adjustments to the derailleurs. First, set the front derailleur between one and three millimeters above the big chainring. To manipulate the front derailleur into position, set the A-Box LED indicator into steady-red-light adjustment mode and then tap the left shifter until the cage swings above the big chainring. Shimano suggests that you set the angle of the outer cage plate one-half degree tail-in (not parallel to the big chainring as with past Dura-Ace). When the time comes to set the derailleur’s limit screws, use the electronic adjust mode-do not swing the derailleur in and out by hand to bring it to the stops. 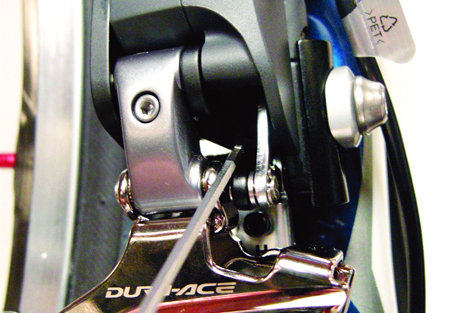 The fixing bolt that sets the angle of the front derailleur is tucked in between the parallelogram arms. 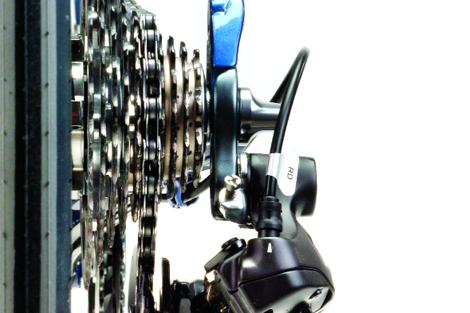 Use ‘adjust mode’ to get the rear derailleur into the fifth cog and Di2’s computer will take care of the adjustments from that point.

To adjust the rear shifting, switch the A-Box to adjust mode and tap the right-side shifters until you get the rear derailleur centered over the fifth cog. Leave it there and then select the flashing red mode at the A-Box while you are pedaling the bike. At this time, the Di2 computer will automatically shift through the gears until it is happy with the shifting performance. In short, you get the fifth cog close, and Di2 will adjust it from there. To set the rear derailleur’s limit screws, shift to the extremes, turn the screw in until it touches the stop and then back it out one-fourth turn. The extra play is necessary to allow Di2 to overshift slightly for crisp shifting performance.