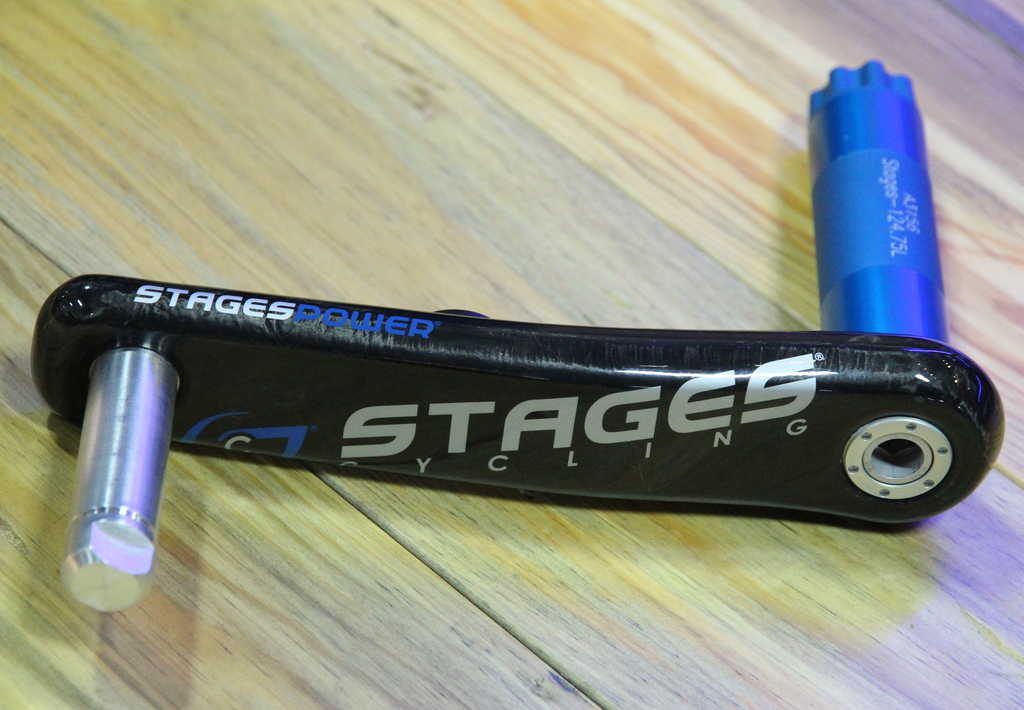 On the morning of the first official day of the Interbike trade show, Boulder-based Stages Cycling, makers of non-driveside crankarm-based power meters, announced a re-vamp of their product line for 2016, including the long-awaited addition of carbon crankarm-based power meters to their extensive line of aluminum offerings. The carbon models include Campagnolo Super Record, Record and Chorus models, as well as FSA models and a Stages-branded carbon crankarm made by FSA that’s designed to work with SRAM Red 22, Force 22 and Rival 22 groups. Not only that, but Stages Cycling has reduced the prices on their existing models, along with refining the actual power meter unit to be slimmer, sleeker and more durable. Here’s the official press release from Stages Cycling…

Stages Power for carbon, a new slimmer housing design, and new prices
Stages® Cycling, Boulder, CO, September 16, 2015—For Immediate Release—Stages® Cycling announces the launch of carbon Stages Power meters, a new ‘gen 2’ design revisions to the entire range of Stages Power meters, and a price drop on select meters. The second-generation meters will be available for Shimano crank arms in September, with the remainder of Stages alloy power meters following suit through the fall season. The new carbon power meters will begin shipping in January with the goal of having all models available in all markets by Spring 2016. Not since the launch of Stages Cycling in 2012, has the Boulder, CO manufacturer brought news as exciting to the industry’s trade shows.

“The 2016 model year product line marks another important step in the history of our company,” said Pat Warner, Stages Cycling’s senior vice president. “Our 2016 product evolutions fall right alongside the launch of our trendsetting Stages Power meter in 2012, our now two-year-long relationship with Team Sky, and—of course—our small part in helping them win the 2015 Tour de France, as illustrations of our continued innovation and leadership within the category of power measurement.”

The new Stages Power meter is:

These two new product ranges—the update of the original Stages Power for aluminum cranks and Stages Power for carbon—represent the evolution of the Stages Power meter. Stages Cycling is, and will always be, a product company. These new models illustrate the company’s commitment to continued innovation and leadership within the power category. Individual models will carry the same base-crank-model taxonomy, and the full suite of Stages Power technologies carry over to both aluminum and carbon crank models.

The full carbon fiber Stages Power meter and crank arm weighs just 145 grams and is compatible with 386EVO drive side cranks as well as SRAM Red 22, Force 22 and Rival 22 BB30 road and SRAM Mountain (168mm Q) BB30 drive side cranks. This impressive compatibility is achieved by way of an innovative range of BB30 bottom bracket spindles. This new Stages Power Meter will also be available for GXP road and mountain cranks in late Winter/Early Spring 2016.

Stages Power carbon: Fully Functioned and Temperature stable
Game changed, again—it took considerable effort for Stages engineers to solve the problem of precisely measuring power in the field on carbon crank arms. There were many challenges, including: the nature of the composite materials; fatigue characteristics, not limited to but including: bonding to a composite material; effect of temperature changes; direction of forces and strain. To build a carbon Stages Power meter, Stages engineers spent years in development and testing specifically to achieve the same consistent and accurate power measurement across all riding conditions that were introduced with the original Stages Power meter, including the preservation of our automatic temperature compensation function.

“We could have made a carbon power meter a long time ago, but it would have had the functionality of a meter from the pre-Stages era,” said Sam Morrison, Stages Cycling engineer and carbon product manager. “The problem isn’t measuring deflection in carbon, it’s dealing with changes of the material when the operating temperature changes. We could have easily released a meter that would require constant and vigilant zero resets, rather, we took our time and built a new system to specifically deal with the challenges carbon faces when temperatures change. What we’re delivering is a fully functional Stages Power meter for carbon cranks, and we’re proud of that. We made no concessions.” New meters; new prices
Due to the efficiencies we’ve developed since the launch of the Stages we’re able to lower the price of our stalwart aluminum Stages Power meters. When we started producing the Stages Power meter, we were hand building each meter, but it was quickly apparent that this would have to change.

“We have always been motivated to maximize a rider’s experience with our products—from purchase to installation and use—and through post-sale support for both product maintenance and power training,” said Doug Crawford, Stages vice president. “This latest introduction increases riders’ access to these benefits through an increase in the compatibility with more crank brands, carbon cranks, and lower starting price points.”

To keep up with the demand from riders, Stages made a significant upgrade in the form of a laser, for etching the base crank arms. This reduced the initial prep of a production lot from 3.5hrs to 38 minutes. The second efficiency to Stages’ manufacturing comes by way of two robotic gluing fixtures that reduce the step of securing the power meter housings to the crank arms by a factor of four.

Go Inside The Peloton With Team Sky’s Ian Boswell

CORSA PRO COFFEE – THE LIFEBLOOD OF SO MANY