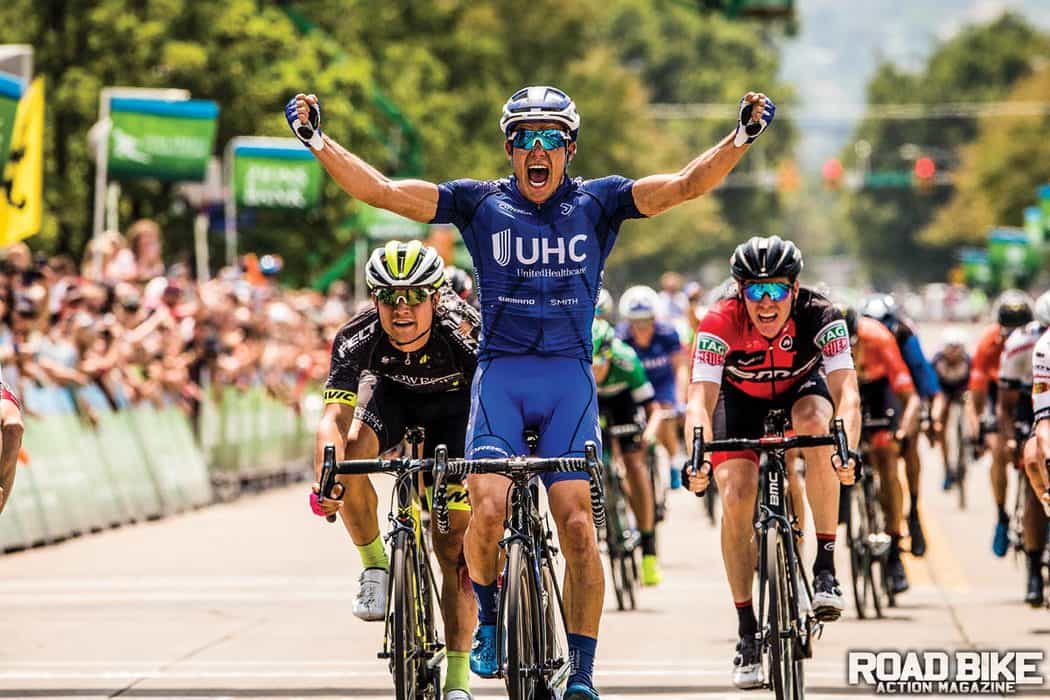 You just wrapped up your first year riding on a Pro Continental team. What differences did you see compared to previous years racing at the Continental level?

The atmosphere was more professional, and the structure is very organized. The team had everything down, and it was very X, Y and Z. You come to the races, and all the guys have a job to do and know what to do. It was still very similar to the Continental level, but you just see that next step up at the Pro Continental level. Being able to do the bigger races and race internationally was an eye opener. It was good to get that experience of racing at a higher level and learn how to sprint with a whole team behind me. Probably the biggest difference was having seven guys riding for me and knowing how to do a proper lead-out and not waste any energy when not necessary.

What can you expect out of yourself to keep improving on your success from this past year?

One thing I did recently was that I got another bike fit. We went over my position and improved it to be more efficient, which should help me stay more relaxed on the bike. I think there’s more improvement to be found there, but I’m also working on my strengths and developing the efficiency to race for five hours. I need to improve my top-end speed to be able to sprint at a higher caliber. I’ve also been working with a sports psychologist to help define when the best time to sprint is, where to sprint and how to use those clutch moments to take advantage of those opportunities at the bigger races.

You’ve been through your fair share of ups and downs with teams folding. How have you managed to deal with negative setbacks yet still drive forward with your training and racing?

For me, it’s really about setting goals. I’ve also learned that there are certain factors that I don’t have control over, such as my race schedule or the team surviving, so I focus on controlling the goals that I do have and sit down with my coach to ensure that I’m staying on track. I have both short- and long-term goals, and achieving the short-term goals is what helps build a platform to meet those long-term goals. With the diversity of the ups and downs that comes with racing, you just have to put your head down and fight through it all. Also, I was fortunate enough to be a desired rider, so with teams folding, I was able to get on another team fairly easy. The bottom line is that you just have to keep chipping away and stay positive.

You came into the sport a bit later than the ideal age to become a pro. Besides your talent, what would you say helped you reach this level when you knew you were a bit older than other riders?

I might be old on paper, but I like to consider myself a late bloomer. I always grew up liking the movie Leo the Lion, and he was a late bloomer. I never look at my age as a limiting factor in my ability. I moved to Tucson to pursue cycling when I was 19 and was able to get involved with many great mentors to guide me along the way. Eric Marcotte took me under his wing while I was an amateur and taught me about proper nutrition and recovery. I always wrote a journal with my race recap to evaluate what I did right and wrong so I wouldn’t repeat those mistakes. I also put a lot of faith in my coach to mentor and shepherd me along the way. I think a lot of younger riders think they know everything if they have a bit of talent, but they usually have a closed mind and don’t listen to other people.

What are some of your training tips you can give out to deal with the heat in Arizona?

To deal with the heat on my long rides, I schedule one-hour pit stops at times and always fill up with water. It’s always about staying hydrated, and normally you do one bottle an hour, but I often drink two bottles an hour. I also like taking post-ride cold showers, which can help fight off the early stages of heat stroke.

You’ve traveled the world racing your bike, but what is it that still stands out as something you want to accomplish?

My biggest goal would be to win the national championships. I have a dream to race the worlds for the U.S. national team. That would be a great opportunity, and I think really just finding some way to do the Classics and spend three months in the cold, wet, windy weather and suffer so much that I end up hating myself. I don’t think doing the Tour de France is super realistic, but I know I can race at that level and beat those guys, and that’s what keeps me going. ν

JAKOB FUGLSANG REVEALS WHATS AHEAD FOR 2021