Is This The Team To Win The Tour de France?

Here's a who's who on Team Ineos 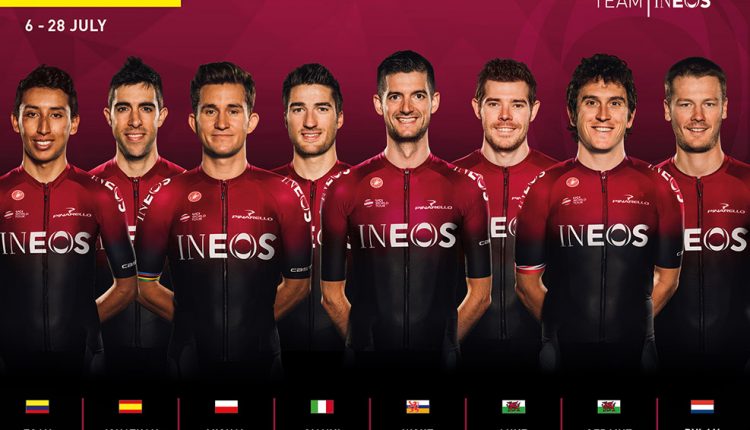 With four-time winner and presumptive team leader Chris Froome still laid up from the serious injuries suffered during the Criterium Du Dauphine, Team Ineos will still have a fearsome line-up of riders ready for this year’s Tour de France. In addition to the obvious attention given to last year’s winner, Geraint Thomas, many pundits are eyeing Egan Bernal as a potential team leader owing to the record amount of climbing included in this years route. Here’s some handy background on each rider provided by the team who have said that “joint leaders” will be the order of the day come July 6.

One of the brightest young talents in the sport, Egan Bernal’s star has continued to rise since joining the team in 2018. This season has seen the Colombian add overall victories at Paris-Nice and the Tour de Suisse to an already impressive palmarès. A crash on the eve of the Giro d’Italia saw Bernal forced to miss the Italian Grand Tour but he heads into July in great form, and is rightfully considered among the best pure climbers in the world.

Set for his 10th Grand Tour appearance this July, Jonathan Castroviejo is one of the most trusted all-rounders in the peloton. A decorated time trialist, with multiple national championships and a European title to his name, Castroviejo is also a key member of the team in the medium mountains. Comfortable setting a tempo on the climbs, he will hope to replicate his part in a winning 2018 Tour de France.

One of the classiest bike riders in the professional peloton, Michal Kwiatkowski has played a pivotal role in the team’s recent Grand Tour success with a series of selfless performances. The 2014 world champion has tasted success at Milan-San Remo and Tirreno-Adriatico more recently, with a blend of all-around talent and experience making him an incredibly important member of the team.

Making his second Tour de France appearance, Gianni Moscon has developed into a superb all-around talent. Able to compete in and win one-week stage races in his own right, the Italian’s climbing capabilities continue to develop, making him a key addition to the squad. Moscon supported Chris Froome to Vuelta a Espana victory in his Grand Tour debut and will hope to be part of yet more success in July.

With 12 Grand Tours under his belt to date, Wout Poels has made a name for himself with his heroics in the high mountains. The Dutch climber has played a vital role in four of Chris Froome’s Grand Tour victories and was part of the 2018 winning Tour lineup for good measure. A fun presence on the bus and around the team, Poels is also a fierce competitor and arrives fresh off fourth place overall at the Criterium du Dauphine.

Luke Rowe has proved to be a lucky charm down the years, contributing to a team victory in all four of his previous Tour de France appearances. Now set to make his fifth consecutive start, the Welshman has grown with the team over the years and has developed into a respected road captain. An invaluable presence on the flat and the wind, Rowe is also adept at setting a tempo at the head of the race for kilometer after kilometer.

Starting the race in Brussels with the number one on his back, Geraint Thomas returns to the Tour 12 months after a dream race which saw him clinch the biggest result of his career. As comfortable in the mountains as he is on the time trial bike, Thomas’ all-around capabilities make him an ideal Grand Tour rider. Despite recently crashing out of the Tour de Suisse the Welshman has been training hard and heads into the race is strong form.

Making his fourth Tour start but first for the team, Dylan van Baarle has been impressing with his climbing performances in the medium mountains. Building on a strong base that has seen him excel in both time trials and the Classics, the Dutchman claimed a stage victory at the recent Criterium du Dauphine in addition to overall success at Herald Sun Tour this season.