Bergamo, Italy, May 22, 2017 (AFP) – An array of punishing climbs on the final week of the Giro d’Italia stand between time trial specialist Tom Dumoulin making history as the first Dutch winner of the race’s pink jersey. But with a lead of over two and a half minutes on Colombian climbing specialist Nairo Quintana, and nearly four minutes on Italy’s two-time champion Vincenzo Nibali, triumph on the coveted 100th edition of the Italian race is now Dumoulin’s to lose.

“The third week will be very difficult,” Dumoulin has repeated every day since he took the race lead from Quintana with a crushing time trial victory at Montefalcone on stage 10. And the towering Dutchman, with the smouldering film star looks, isn’t far wrong. After a third and final rest day on Monday the pink jersey battle moves up a considerable notch Tuesday on a 16th stage which heralds the first of five consecutive days in the high mountains.

Quintana, the 2014 champion and a two-time runner-up at the Tour de France, should be in his element and hoping his Movistar team — as they have done so far — set the kind of punishing pace on the climbs that leave rival teams short of support riders. On Sunday the diminutive Colombian thanked Dumoulin for slowing the pace of the peloton when he crashed on a descent 36 km from the finish line in Bergamo, so he could catch up. “It was a nice gesture from a big rival and a great person,” said Quintana, who recovered sufficiently to finish second, just behind Luxembourg’s Bob Jungels but six seconds ahead of Dumoulin to reduce his arrears to 2:41.

But Quintana is unlikely to return the favour if Dumoulin — who has impressed so far on the easier climbing stages — is left behind him, and Nibali will be even less charitable on the descents.
Nibali, the defending champion who held off the threat of Colombian Fabio Duarte to win a snow-hit penultimate stage and seal his maiden pink jersey at Tre Cime di Lavaredo in 2013, sits fourth overall at 3min 40sec behind Dumoulin. Like Quintana, Nibali has few options if he is to launch a late challenge for the main prize. “Whoever is behind Dumoulin has nothing to lose. They have to attack him,” said Nibali’s Bahrain teammate Joaquim Rodriguez while on a visit to the race on Sunday.

Nibali, though, has looked below his usual best on the climbs featured so far, admitting Sunday: “On the climbs we’ve done so far, I’ve paid the price. But I can’t give any more than I have.” A renowned downhill specialist known as ‘Il Squalo’ (The Shark), Nibali could now try and take a chunk out of his rivals on some of the many, long, technical descents to feature in the coming days, while hoping his climbing form improves. Especially as the Giro d’Italia, which has never been won by a Dutchman, will be decided by a final-day time trial from Monza to Milan. Over 39.8 km
last week, Dumoulin was 2:53 faster than Quintana and 2:07 quicker than Nibali. Nibali added: “It’s not over, but I have a fairly big deficit to Dumoulin. If he ends up winning (the race) when we get to Milan, I’ll shake his hand.” The race resumes Tuesday with a 222km 16th stage from Rovetta to Bormio which features a 12.6 km to the Mortirolo pass and two ascents of the Stelvio climb. 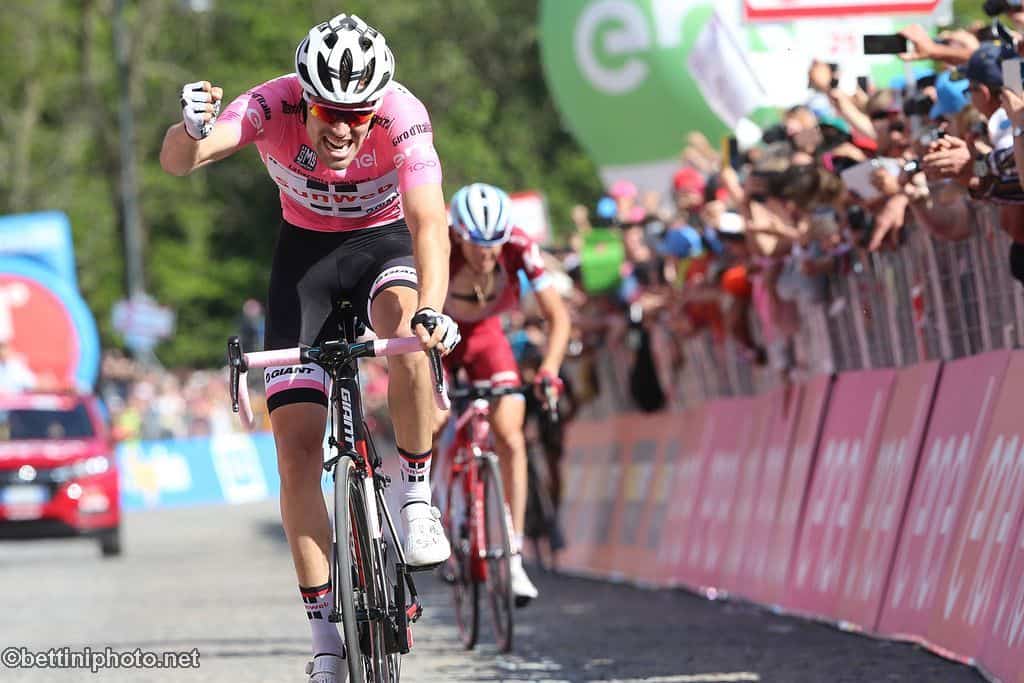