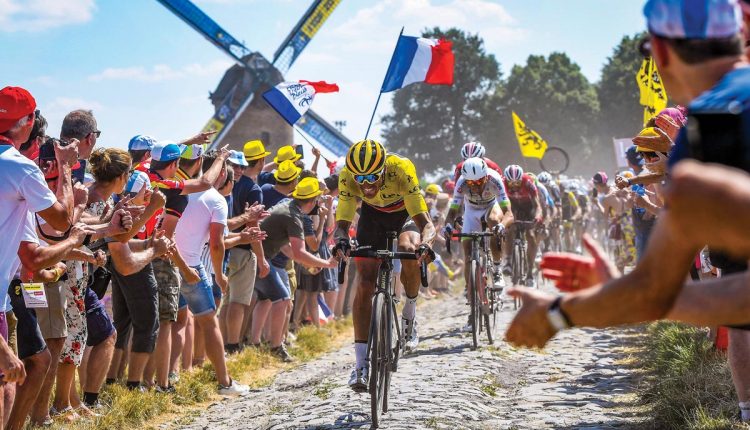 You can certainly forgive American rider Chad Haga who, early in the three-week-long race, was simply trying to downplay the impact of the day-to-day drama that was unfolding during this year’s Tour de France when he gave that reply.

No matter from what perch they were spectating, between a string of horrifying crashes and heroic stage wins, this year’s Tour de France kept cycling fans on the edge of their seats. Just as it has done every year for over a century, La Grande Boucle held up a sweat-, tears- and blood-stained mirror that reflected every facet of the human condition. Here’s our selection of the top moments following 2081 miles of racing that are worth looking back on. 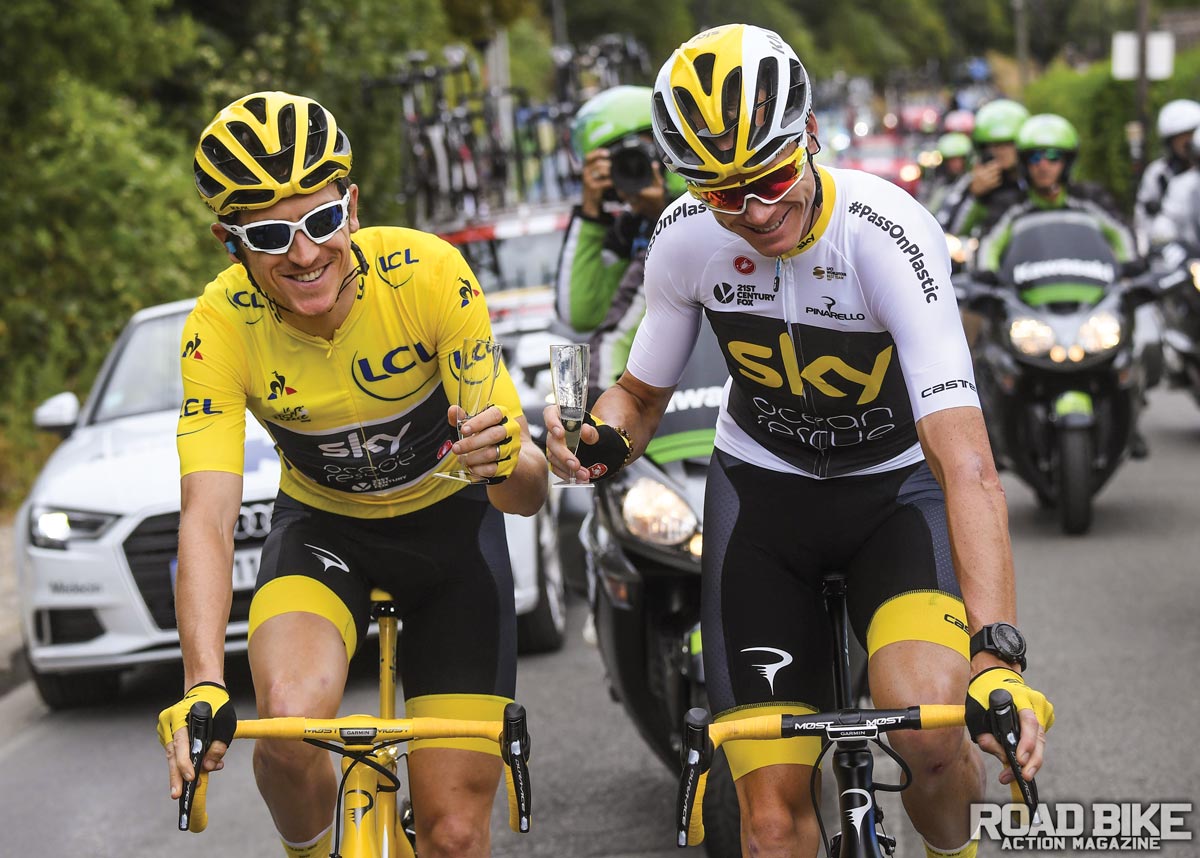 Ever since he failed a doping test at last year’s Vuelta, the four-time Tour winner has been under a cloud of controversy. Hoping to be one of the few riders capable of pulling off the rare Giro/Tour double (a feat that hasn’t been done since the late Marco Pantani in 1998), Tour organizers did their best to upset Froome’s apple cart by banning him just days prior to the start. Fortunately for Chris, after dawdling all year, the UCI finally stepped in and cleared him of any wrongdoing.

Team Sky did have a plan B, though, in the name of Geraint Thomas. The two riders would go into the Tour with dual leadership, a strategy Team Sky has never done. While Thomas rode into yellow, everyone still believed that Froome would end up being the overall leader. It wasn’t until Stage 10 when Froome proved himself human and ended up losing touch with his podium rivals, who rode him off the podium in Paris. 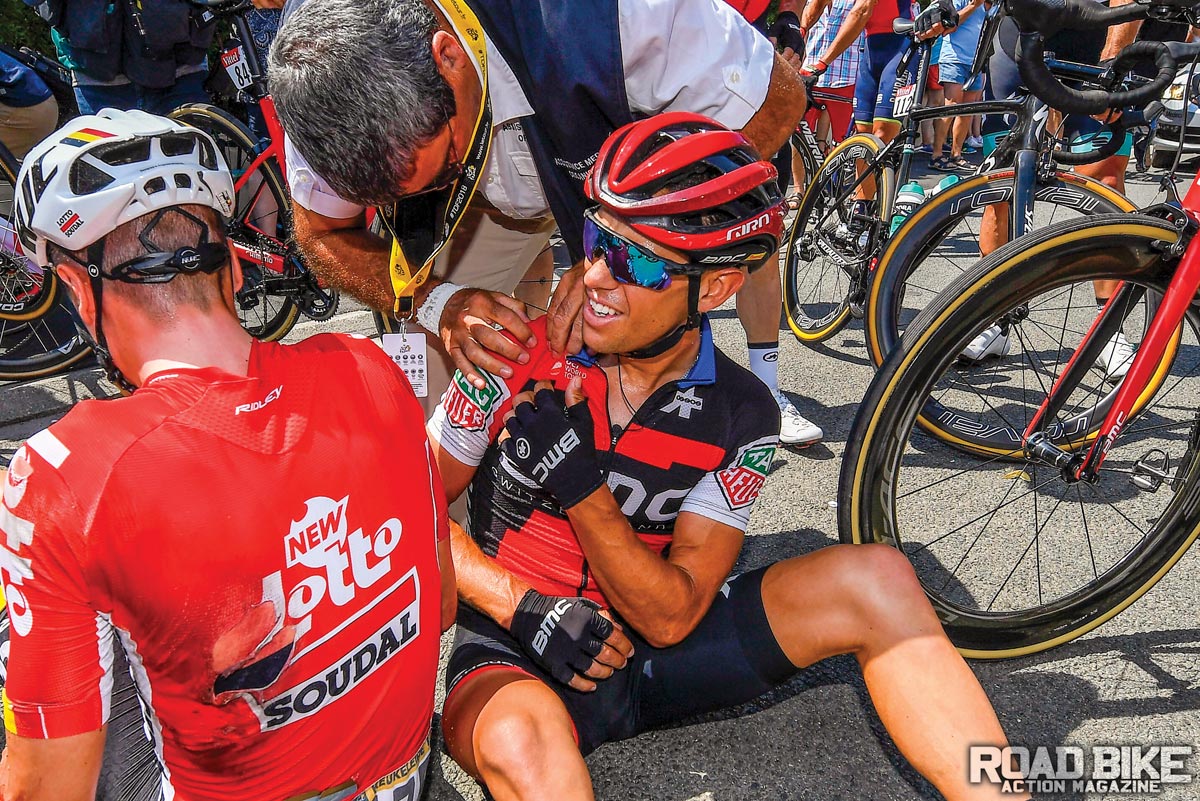 There may be no other rider with as much bad luck as Richie Porte. Richie was once Chris Froome’s faithful lieutenant during his Team Sky days. Once Richie started showing that he could challenge Chris as an overall contender, BMC hired him away. Last year Richie came into Le Tour in fine form with a powerful team to support him. He made it to Stage 9 before a high-speed crash resulted in a broken collarbone and pelvis.

Fast-forward to this year and Richie once again came into the Tour looking strong and confident. Then, in a cruel twist of coincidence, a crash in the first 10 kilometers of Stage 9 resulted in yet another broken collarbone. 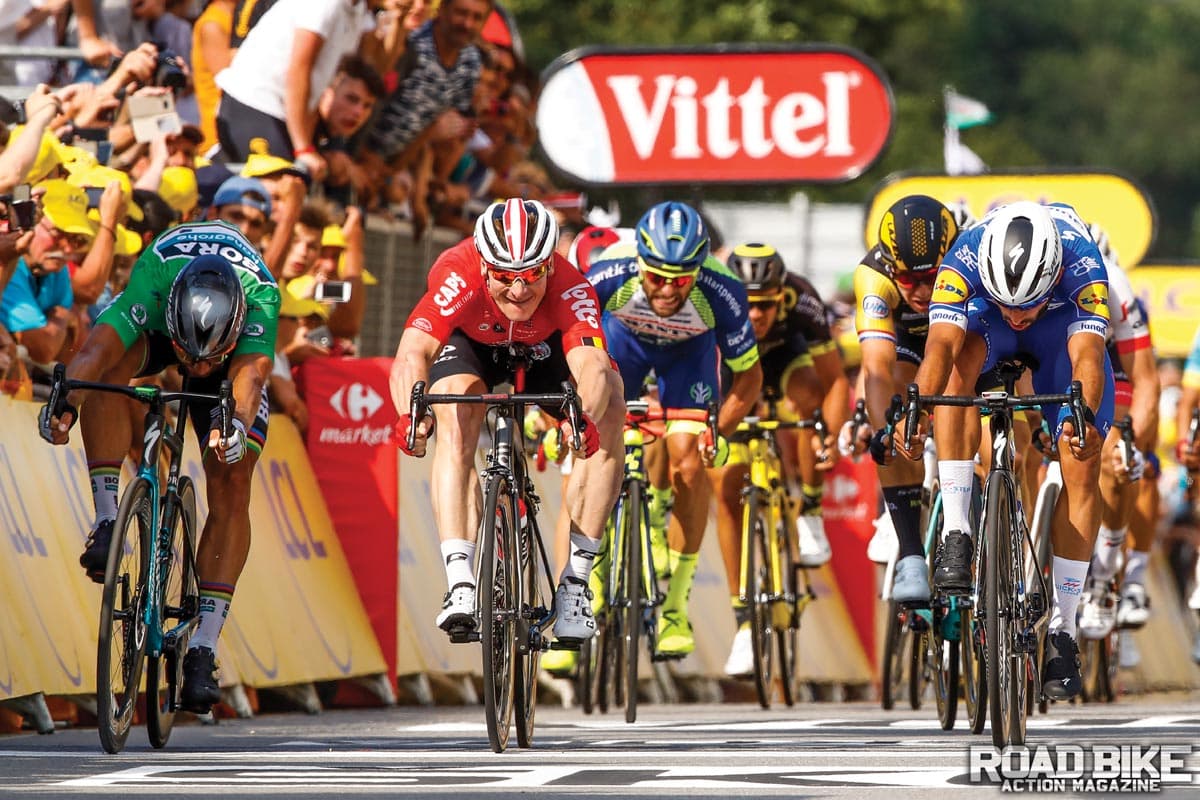 While the mountain stages have always proven tough for the sprinters, the climbs in this year’s Tour had a measurable impact that stirred a big debate about whether the race should be made easier so as not to lose so much talent before the race storms down the Champs-Élysées in Paris. Mark Cavendish never showed his previous form and, along with Marcel Kittel, missed the time cut on Stage 11 and were forced to abandon. Even more surprising was the next day, which saw stage winners Dylan Groenewegen and Fernando Gaviria both missing the time cut and out they went as well. 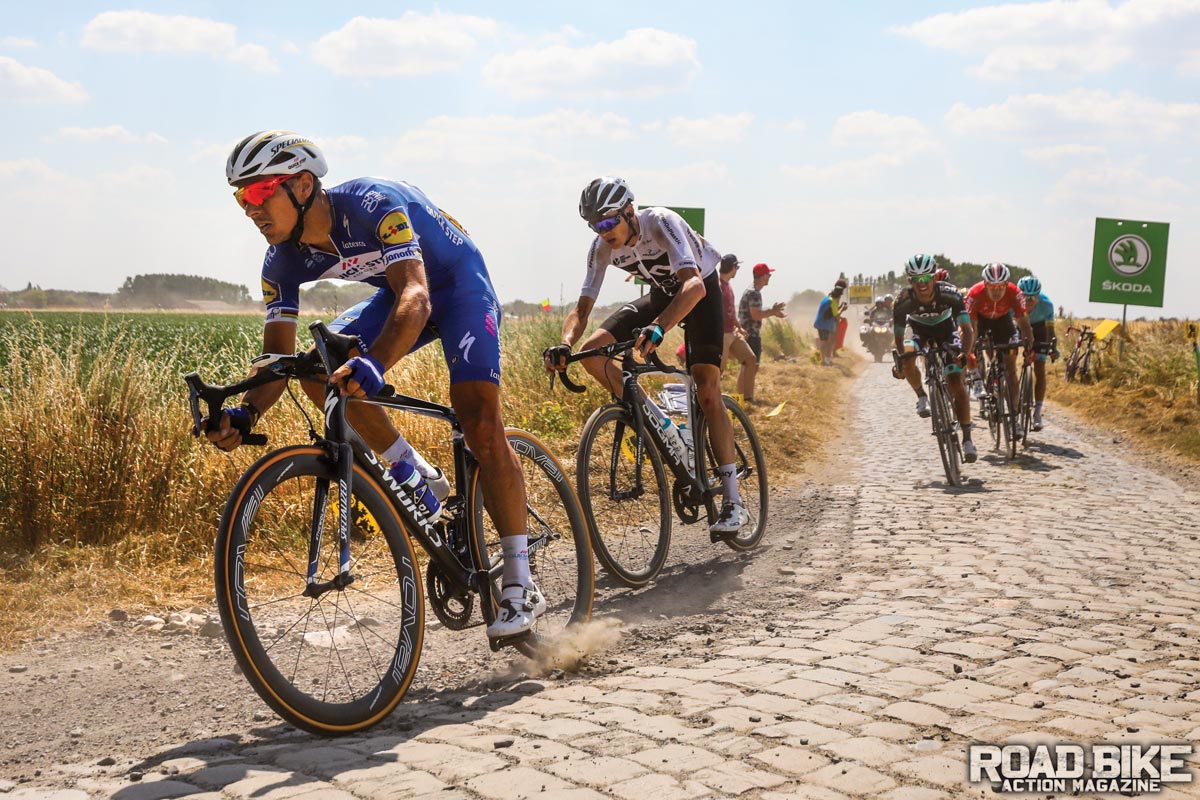 A spectacular crash involving Gilbert on a descent resulted in him flying over a wall into the unknown. Gilbert was helped back up onto the road to finish the stage, but the crash resulted in a broken kneecap. He would not start the following day. His director Brian Holm was quoted saying, “When you hear them scream, you know they’re alive. When you don’t hear anything, you start to get stressed.” 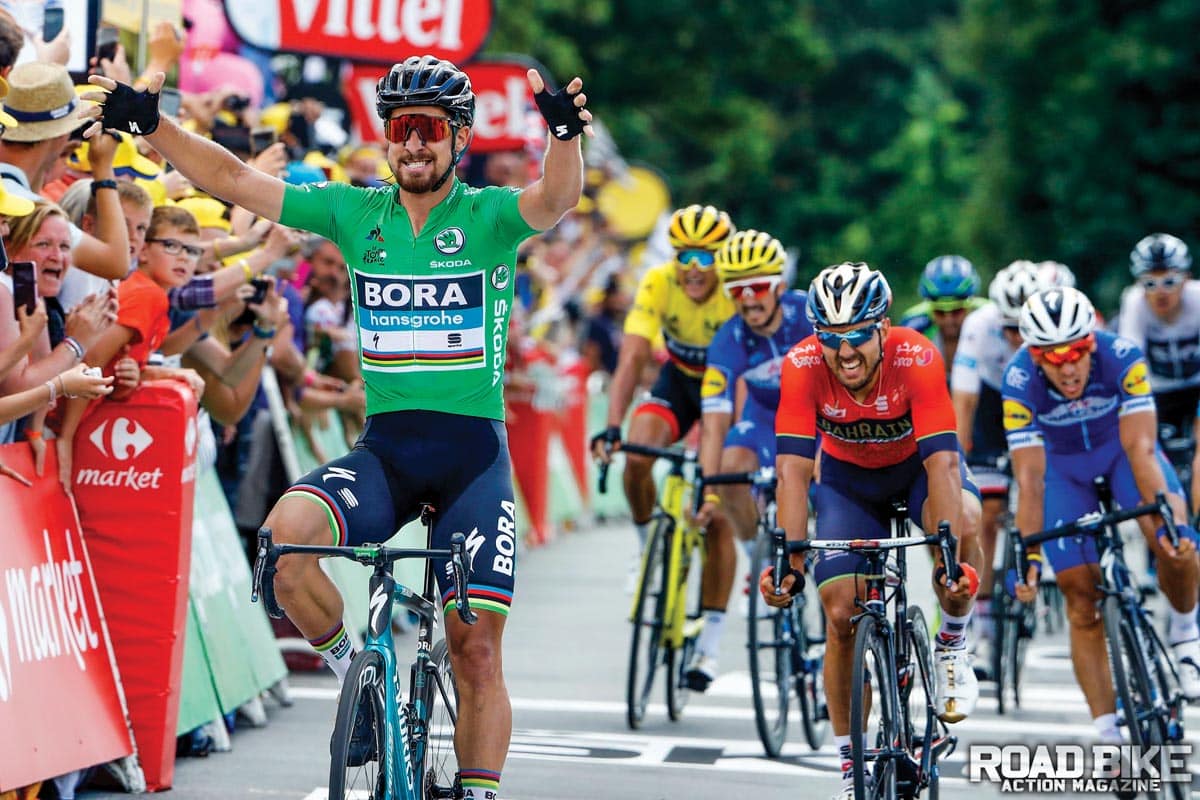 Where do we start with Peter Sagan? The multi-talented Slovakian won three stages to wrap up his sixth green jersey. After a series of typically miraculous efforts, race watchers were stunned to see a bloodied and visibly shaken Sagan cross the finish after a big crash in Stage 19. In typical style, Sagan toughed it out during the stage to make the time cut for the next two stages. Sure, all the riders suffered mightily during the Tour, but Sagan truly put out a heroic effort throughout. 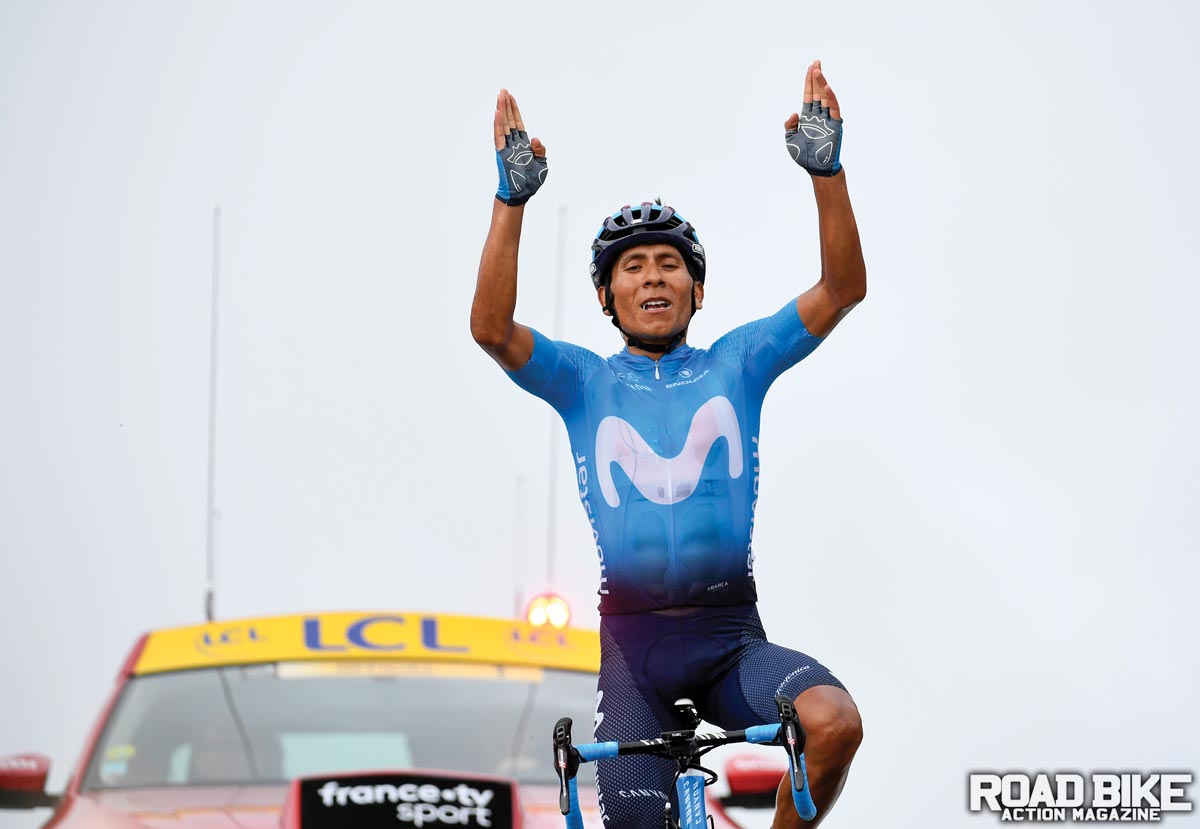 Nairo Quintana burst onto the Tour in grand form in 2013 when he not only won a stage but went on to also win the best young rider jersey, the King of the Mountains jersey and finished second overall to Chris Froome. A yellow jersey looked to be in his future, but despite going on to win the Giro d’Italia and Vuelta Espana, he has never again gotten close to pulling on le
maillot jaune. 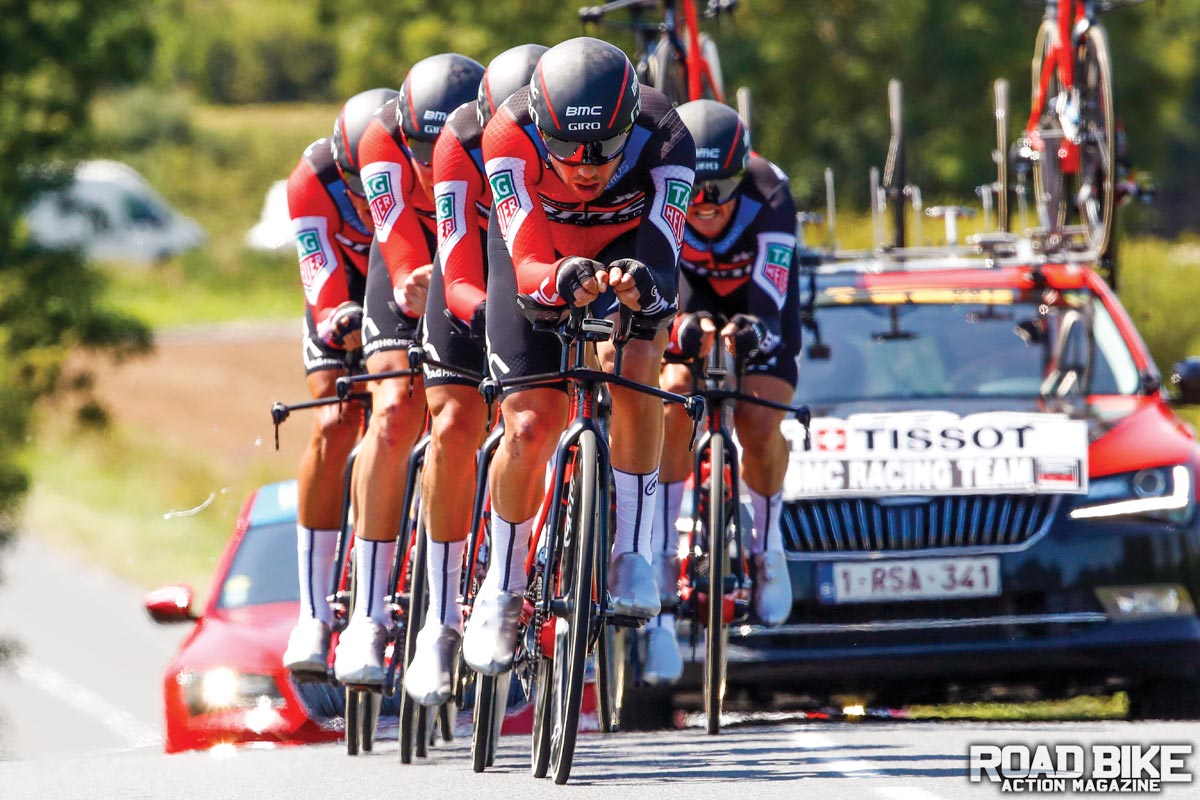 In the wake of the death of team owner Andy Rihs, the 2018 Tour de France marked the last time you will see the BMC train in action. For 2019 the team will continue on in new colors with new title sponsor CCC coming on board to save the squad, but without the Swiss bike brand underneath them. #WeRideForAndy 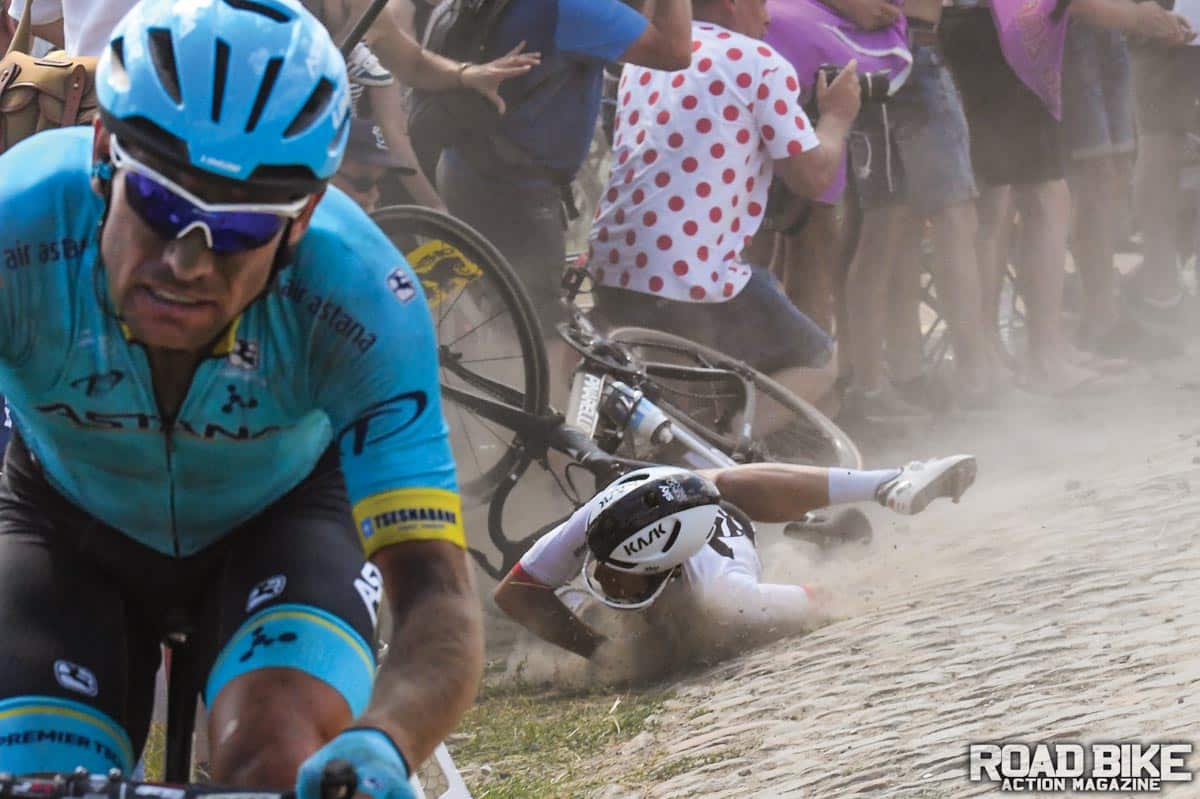 As the youngest rider in the race, Colombia’s Egan Bernal turned heads with his maturity and work ethic. Except for this mid-corner slip-up on the cobbles, the Colombian rider was a reliable workhorse for Team Sky and left the race as a future contender for the overall. 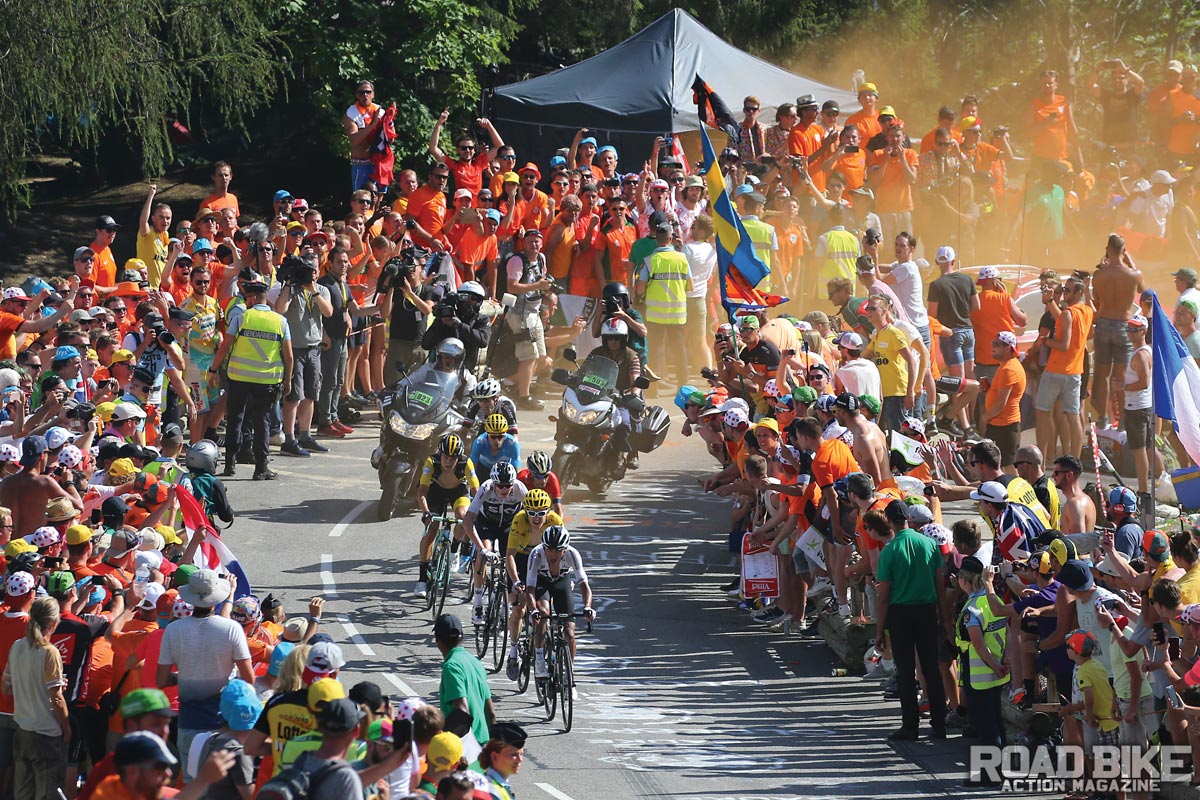 As tradition would have it, the infamous Dutch Corner on Alpe d’Huez featured its usual level of chaos and enthusiasm. Unfortunately, unruly fans remain as difficult a challenge for the riders as any steep climb or wet descent. 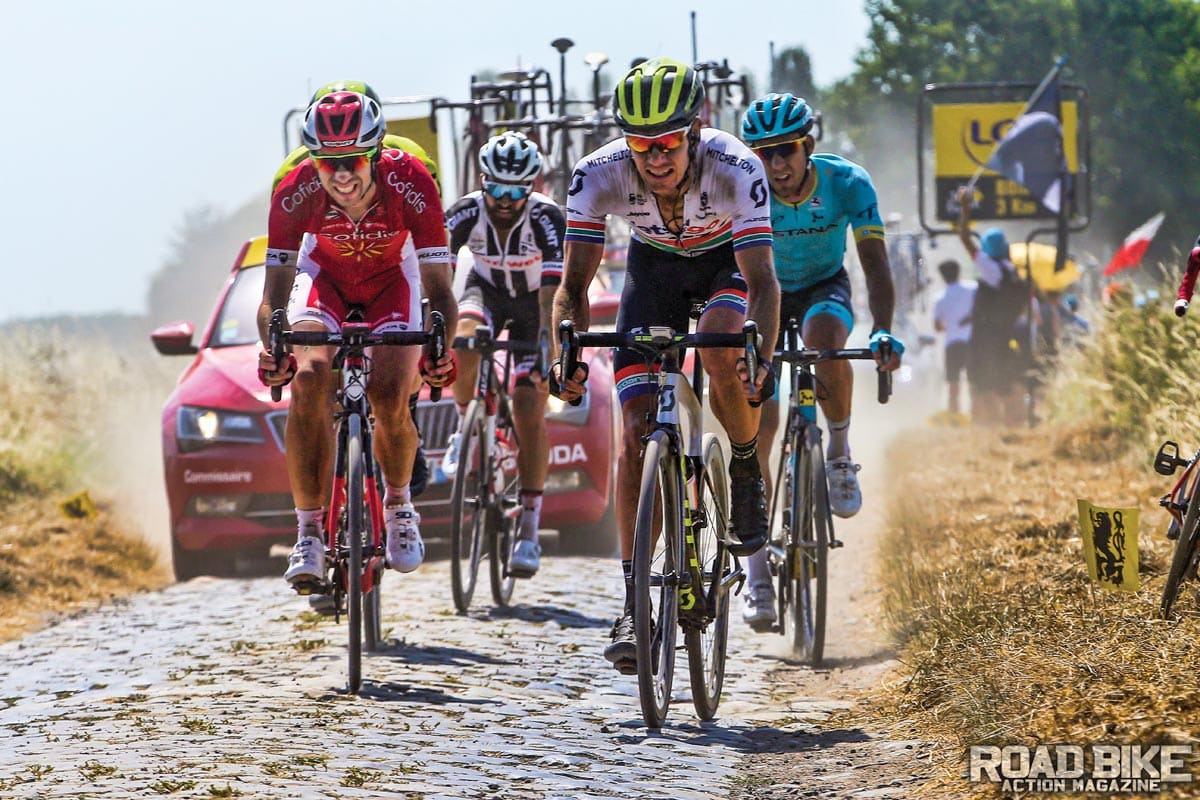 The Tour organizers looked to spice things up this year by bringing back the cobbled sectors to Stage 9. Nothing new for the Tour, but the number of sectors were more than previous years. Fifteen rocky sectors would be on tap for Stage 9, resulting in 13.5 miles of cobbles. A day that had many nervous riders would end up proving to be more or less uneventful for the GC hopefuls. Other than a few crashes and punctures, the GC contenders all
finished together. 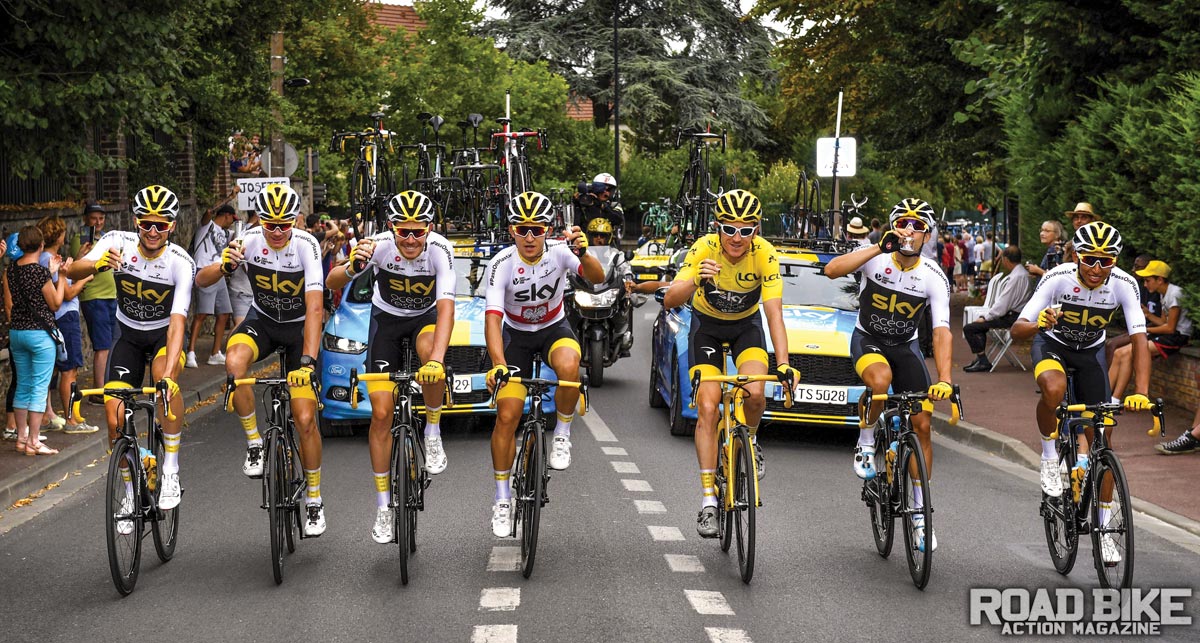 Who gets the dough? 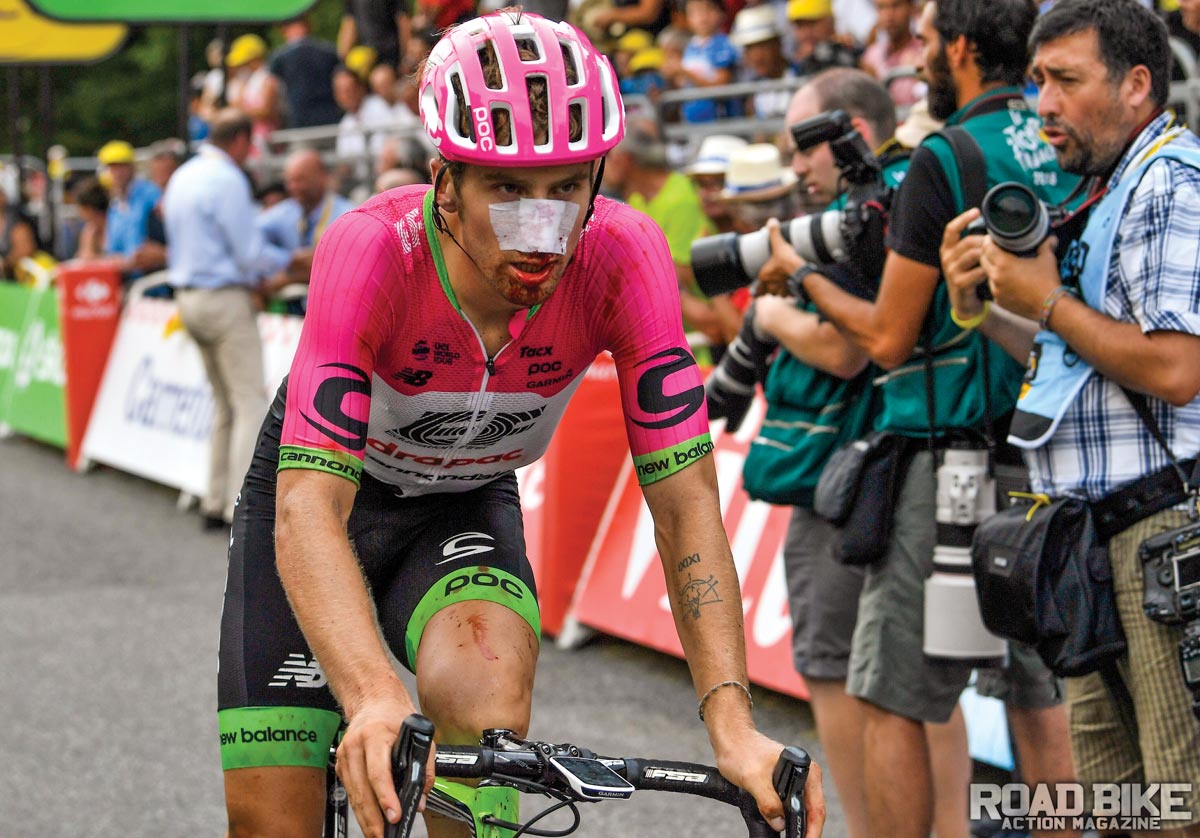 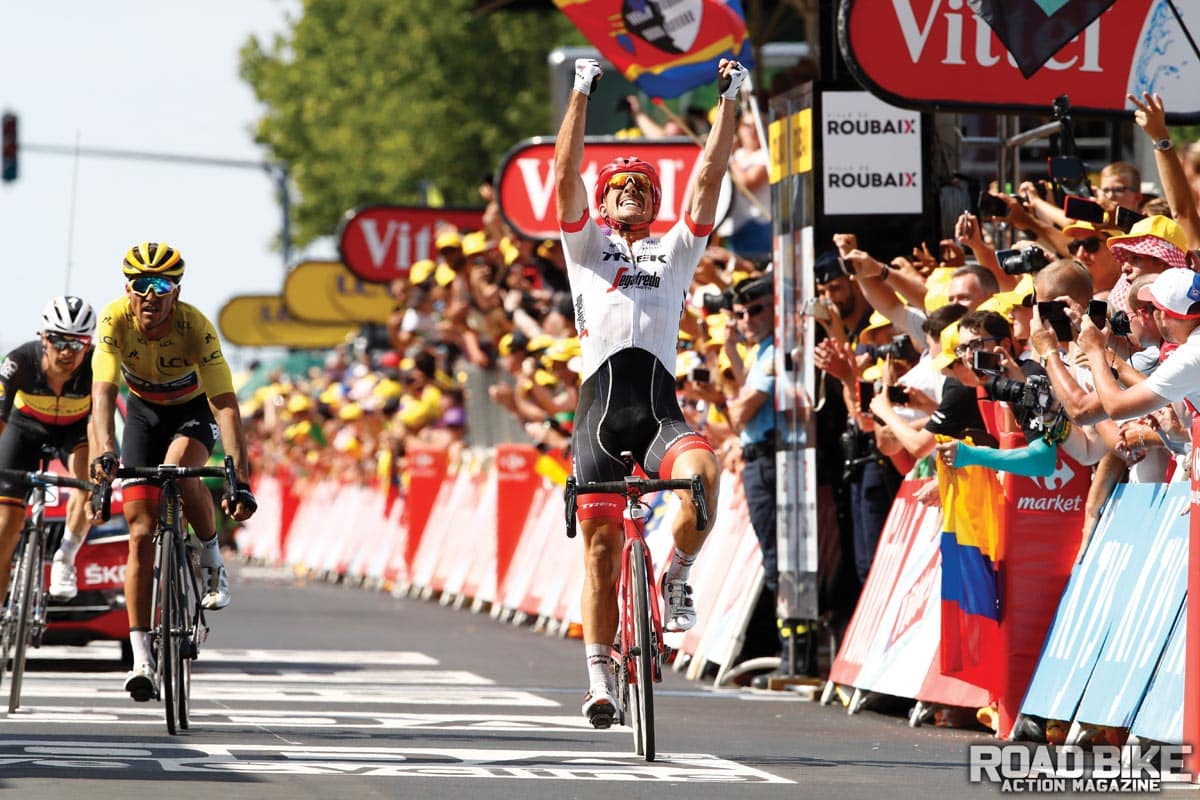 It was during a team training camp in 2016 that John Degenkolb was hit by a car and suffered injuries so serious that many thought he might never race again. While his comeback was tough and fraught with uninspiring finishes, the German rider finally found his legs and emotional redemption when he won the cobbled Stage 9 in a three-up sprint. Comeback stories are many but seldom as inspiring as Degenkolb’s 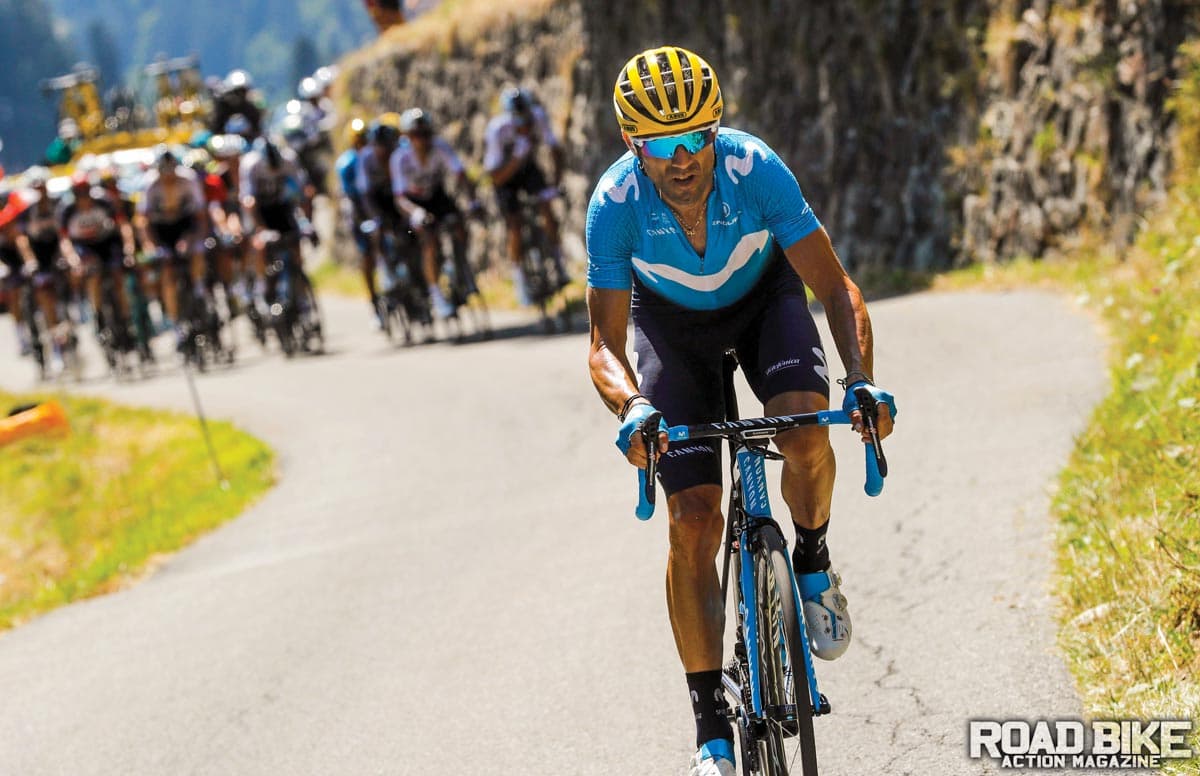 The 38-year-old Spaniard came into last year’s Tour as a key lieutenant for Nairo Quintana, only to crash minutes into the opening time trial, which resulted in a broken kneecap and leg. It was an injury that looked to be a career ender. However, the elder statesman bounced back looking stronger than ever this year as he worked tirelessly to keep teammates Mikel Landa and Nairo Quintana in the thick of
the action. 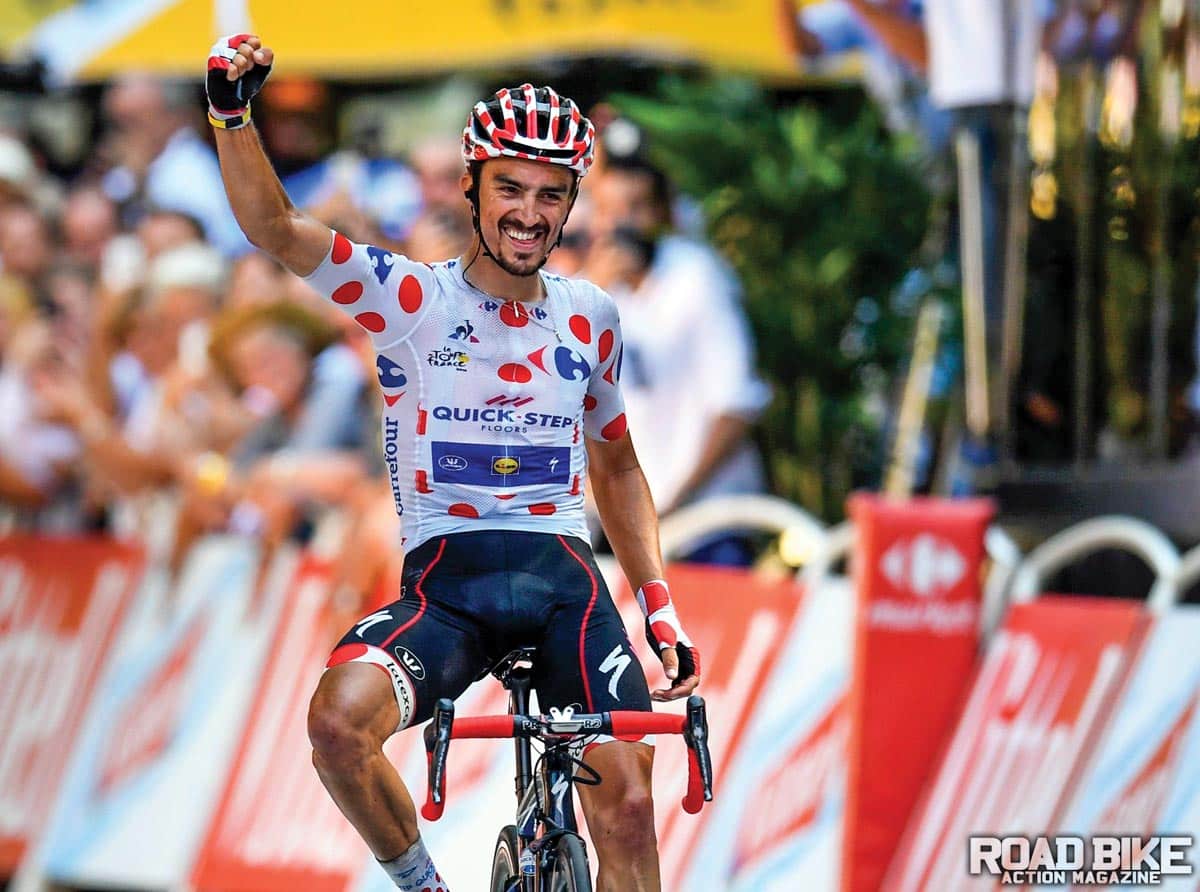 Last year Julian Alaphilippe was on track to enter the Tour de France for the first time, but an unfortunate crash at the Vuelta al Pais Vasco just prior to the Tour forced him to have knee surgery and miss his rookie debut. Lucky for France and his team, he came back swinging this year with two stage wins and a convincing overall win in the King of the Mountains competition. 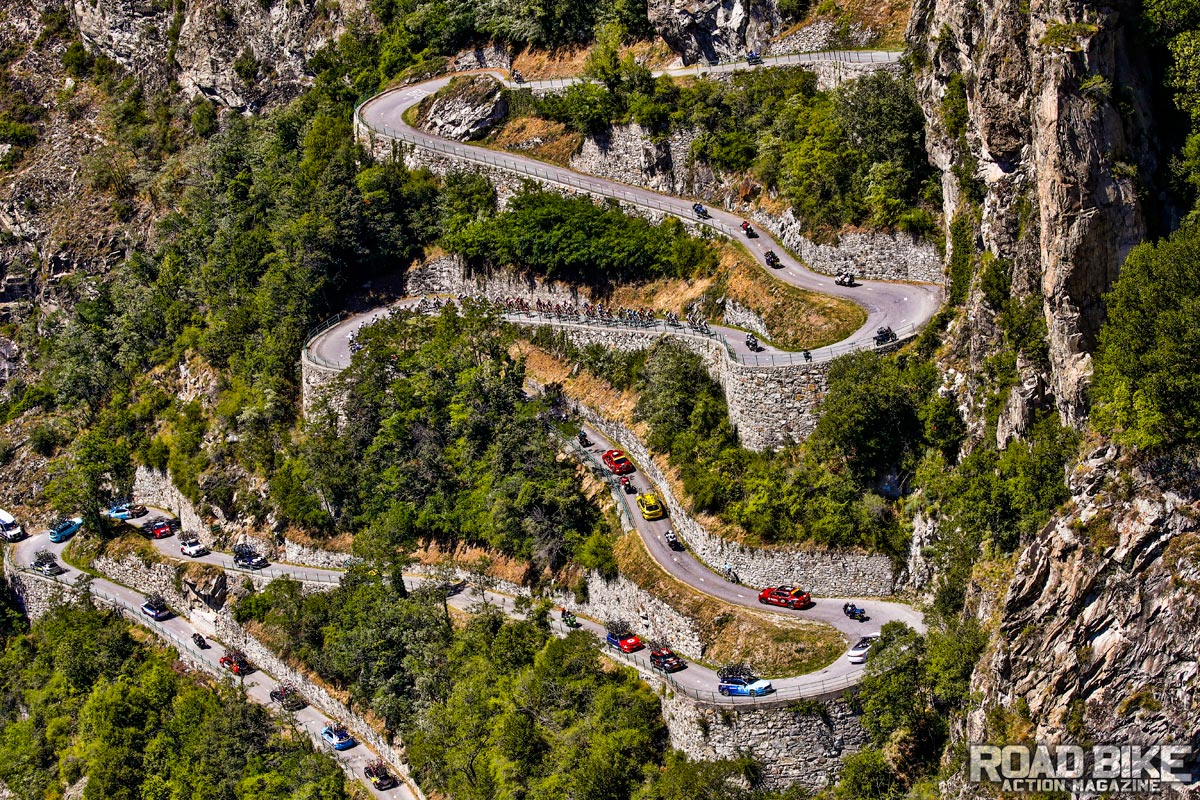 “What is pressure?!” —Peter Sagan

“It’s a game here. We’re
playing games. It’s super nice, and we make it very important in our heads, but I’m not risking my life for others to win the Tour.” —Tom Dumoulin on the high-speed descents

“If he breathes, he races.” —Christian Vande Velde commenting on Peter Sagan

“Everybody said I was done. I said no, I am not done. The feeling in the legs was very special!”
—John Degenkolb

“I mean he doesn’t look elegant on the bike I will agree with that 100%.”
—Paul Sherwen commenting on Chris Froome

“Today was the hardest stage for me in my life. I have the green jersey, then I have to finish the race.”
—Peter Sagan following his crash

“I won the Tour, man. The last time I cried was when I got married, and I don’t know what’s happened to me.”
—Geraint Thomas as he broke down crying in jubilation.

“Kids, dream big, and with hard work, everything pays off in the end.”
—Geraint Thomas in Paris