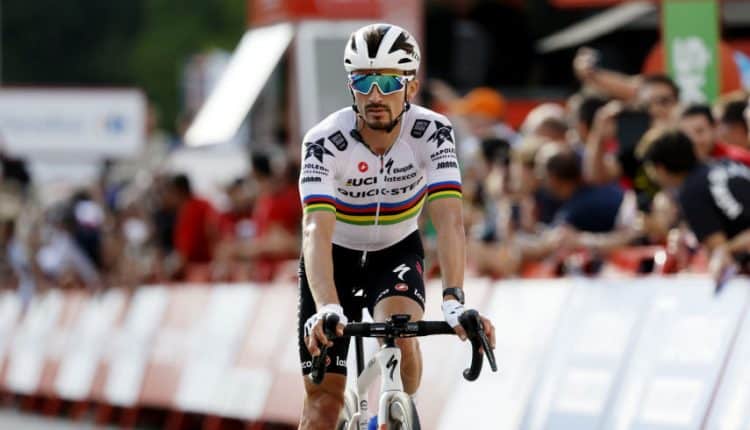 Just when his season was starting to come around in hopes of securing another rainbow jersey, reigning world champ Julian Alaphilippe’s aspirations were dashed in a crash at the Vuelta a Espana.

Julian Alaphilippe crashed out of the Vuelta on Wednesday, dealing a blow to his hopes of a world title hat-trick and to the chances of team-mate Remco Evenepoel winning the Spanish race.

Alaphilippe fell with less than 70 kilometers to go on the 191.2km run along the windy Andalusian coast to Cabo de Gata. As the peloton went round an uphill corner, one of his Quick-Step team-mates slipped over and Alaphilippe, right behind, rode into the fallen bike and flew over his own handlebars.

With Alaphilippe sitting on the tarmac in distress, Vuelta medical staff quickly crowded round as the peloton disappeared up the road. After examining the fallen Alaphilippe, the medical staff strapped his right shoulder and loaded him into an ambulance.

At the Vuelta the Frenchman was happily working for Quick Step’s young Belgian prodigy Evenepoel. “When I see since the beginning of the season, the shitty feelings I had, now I’m happy to be able to do a good job in the Vuelta. It’s getting better and better,” he said on Sunday after stage nine.

On Monday, Evenepoel praised his super-domestique. “If you see the work Julian has done, it’s like sitting in a car behind him, following him and knowing that everything will be fine. I haven’t seen many multiple world champions do things like he did,” said the Belgian.

Alaphilippe has had a tough season. He suffered a terrible crash in the Liege-Bastogne-Liege classic in April. That kept him out of the Tour de France. He then tested positive for Covid at the end of July and was feeling “a little tired” as he prepared for the Vuelta.

The news of his crash drew a sympathetic response from rivals. “Courage, Loulou!” tweeted the Movistar team, whose team leader Enric Mas is third overall. Alaphilippe was the latest casualty in a Vuelta that has been hit unusually hard by crashes and Covid positives.

Simon Yates, the 2018 Vuelta champion, withdrew before the start on Wednesday with Covid. Four cyclists had to pull out of Tuesday’s stage due to Covid including Irishman Sam Bennett, who won two stages on this year’s race. That left 154 of the 184 starters to begin on Wednesday’s 11th stage with only four of the 23 teams at full strength. 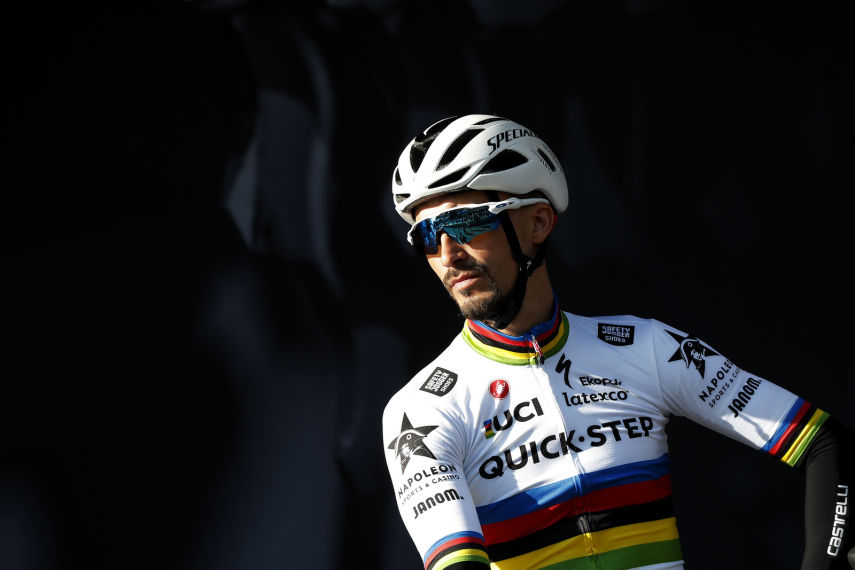 “Following his crash in stage 11 of La Vuelta, the World Champion was taken to the hospital, where he was examined by doctors. Those examinations have revealed that Julian Alaphilippe has dislocated his right shoulder, while X-rays have shown there is no fracture. Doctors have reduced the shoulder as a result. Julian will travel to Belgium on Thursday, where he will undergo an extra scan at the hospital in Herentals, in order to rule out any further damage. At this point, no timescale has been set for his recovery.”

ALAPHILIPPE GIVEN ALL-CLEAR TO RACE WORLD CHAMPIONSHIPS AFTER CRASH