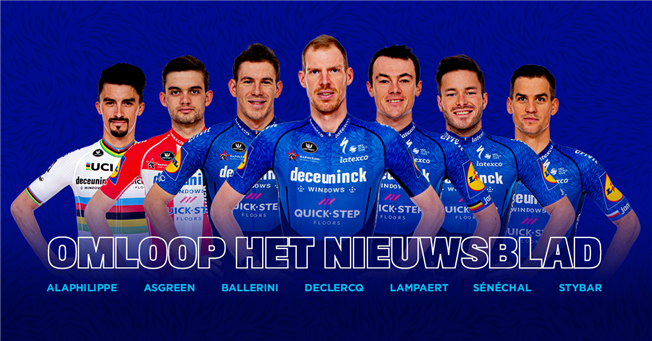 Held since 1945, Omloop Het Nieuwsblad will run its 76th edition this Saturday, when the Wolfpack will line out in Gent for a 201km journey – peppered by 13 hills, including the iconic Muur-Kapelmuur and Bosberg – that at the end will take them to Ninove. The race, which kicks off the Classics campaign that is set to stretch until the end of April, will mark World Champion Julian Alaphilippe’s first outing on the cobbles since last autumn’s Ronde van Vlaanderen, and at the same time, his Omloop debut.

First, and so far, only Czech rider in history to have won a cobbled Classic (the 2019 Omloop and E3), Zdenek Stybar will also be at the start, part of a very strong Deceuninck – Quick-Step team that will include the likes of Kasper Asgreen, Davide Ballerini, Tim Declercq, last year’s runner-up Yves Lampaert and Florian Sénéchal.

On Sunday, Kuurne-Brussels-Kuurne will put on the table a course that in the past years has made it really difficult for the sprinters to be in contention at the finish. Despite the largely flat roads in the last part of the 197km race, it remains to be seen if the peloton’s fast men will still be in the main group by then, as the route will offer the attackers plenty of opportunities to dispatch them, as evidenced by last year’s edition, when Kasper Asgreen superbly held off the bunch after launching a move more than 30 kilometers from home.

The Danish Champion will be one of the team’s three Omloop riders at the start of Kuurne-Brussels-Kuurne twenty-four hours later, alongside Lampaert and Stybar. They will be joined for the 73rd edition of the race by Stijn Steels, Bert Van Lerberghe, and two cobblestone rookies, Alvaro Hodeg and Jannik Steimle.

“It’s finally that time of the year, the Opening Weekend which riders and fans love so much. We are excited and really looking forward to it. Julian will have another nice shot of showing what he is capable of doing on the Flemish roads, after last year’s De Ronde. It will be great to see him ride a prestigious race as Omloop clad in the rainbow jersey.”

“We are curious to see Davide Ballerini – who had a superb start to the season in Provence – in action. Last year he was slated to make his cobbles debut for us, but due to the weird season that we had, this has been postponed for this year. Styby is a former winner of Omloop, while Kasper produced a masterpiece at the previous edition of Kuurne. Yves, who was again strong on the cobbles last season, Florian, Tim – who everyone is used to see at the front pulling hard for the team – Alvaro, Jannik, Stijn and Bert will provide us with a lot of options and firepower for the weekend, which we await with plenty of confidence and motivation”, explained Deceuninck – Quick-Step sports director Tom Steels.