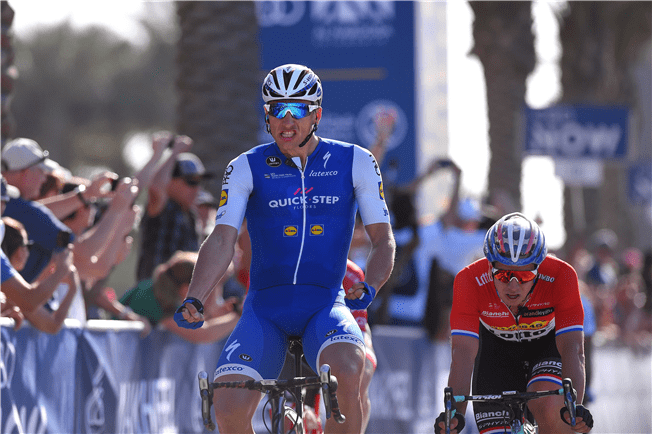 Defending Tour of Dubai champion Marcel Kittel of Quick Step outsprinted the field to clinch a
second stage win after a 188km ride from Dubai to Ras al-Khaimah on Wednesday.

Having won Tuesday’s opening of five stages, the German — who has won nine Tour de France stages — edged fellow sprint specialists Dylan Groenewegen and Jakub Mareczko after the peloton comfortably closed down a plucky escape 11km from the line.

Thursday’s third stage is also a flat run over 200km to Fujairah.

THE TEAM REPORT…
“As the sprint trains began forming, the Quick-Step Floors boys moved their way through the peloton and took the front inside the final two kilometers, just after the last roundabout. Other teams tried to counter, but couldn’t do anything against the blue train, as Matteo Trentin and Fabio Sabatini brought Marcel Kittel in an excellent position just 200 meters from the line, setting him up for his sixth career victory in the Dubai Tour.
Marcel’s huge sprint didn’t give any chances to his opponents, as the 28-year-old German roared over the finish line, ahead of Dylan Groenewegen (LottoNL-Jumbo) and Mark Cavendish (Dimension Data): “I’m really happy. In the last few days I felt I was very confident about the team. I’m happy to have a winning start, just like last year”, said Kittel, the race’s first overall leader. “It was difficult to time it right because there are a lot of strong sprinters here and you need to find the right moment. We were always in a good position, not really in the front, but we chose the right distance to go for it. After we passed the last roundabout, we tried to find each other and we went full gas to the finish line. It worked really well.”

It was Marcel’s first ever victory on disc brakes, one which we was keen on sharing with the whole team: “A lot of riders came to me today and asked me about that, they were curious about the disc brakes and how it feels to ride with it. I think I made the right choice and I’m happy to have it this season. The most important thing is that we came out on top today. Last year we won many races together, and that’s what we want to do also this season. The first race of the year is always insecure, because you can never know how things will work. All the guys were there today and did a great job, so this is also a victory of them.”

EROICA CALIFORNIA: A THROWBACK TO CYCLING’S PAST