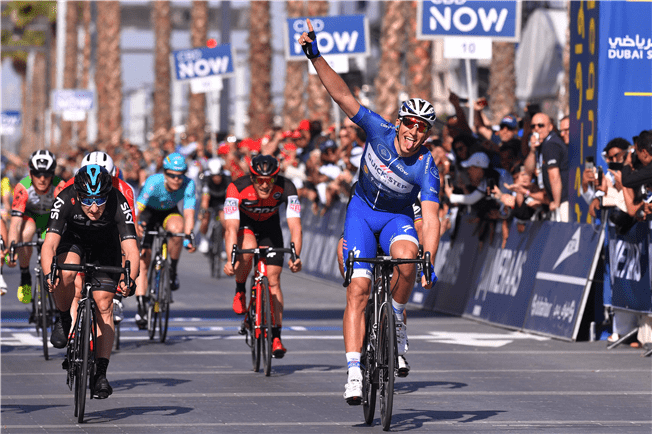 Defending champion Marcel Kittel won the Tour of Dubai on Saturday after clinching the final stage by emerging triumphant from a bunch sprint at the foot of the world’s tallest building.

The German Quick Step rider outpaced Italian duo Elia Viviani and Riccardo Minali for his third stage win from four on the Tour after a 124km run through Dubai finishing at the foot of the 828m-tall Burj Khalifa.

Friday’s medium mountain stage could have derailed Kittel’s defense of a Tour also won in 2016, but due to violent winds the stage was cancelled.

Fourth edition of the Dubai Tour was a memorable one for Quick-Step Floors and Marcel Kittel, who won three of the four stages capitalizing on the great work of his teammates, who took the front of the peloton every day and controlled the breakaway before delivering the German in the final 200 meters, where his huge power, incredible burst of speed and tactical nous did the rest, catapulting him to victory and a perfect start to his second season with Quick-Step Floors.

The last stage of the race was also the shortest at 124 kilometers and got off to a flying start, with speeds of over 50 km/h, as several riders tried to jump clear and make it into the break. It turned out to be mission impossible in the first 40 kilometers of the day, as the escapees weren’t to the peloton’s liking. Eventually, Matteo Bono (UAE Abu Dhabi), Ivan Cortina (Bahrain-Merida), Floris Gerts (BMC) and Dmitry Gruzdev (Astana) got a green light and went into the break, but Julian Alaphilippe and Bob Jungels led a steady chase behind them, carrying the field on the flat roads to Dubai City Walk, and kept the gap under two minutes all the time.
With 10 kilometers left, it was all back together as the sprinters’ teams began jostling for position on the wide roads of Dubai. Quick-Step Floors took over the front and upped the pace as more and more lead-out trains began to form. Once again, Fabio Sabatini slotted into his role as Marcel Kittel’s final man, but a chain problem for the Italian meant that the German was on his own going into a tight right-hand bend with 400 meters left.

This didn’t stop Marcel, who kept a close eye on his opponents and started his sprint on the outside, getting the better of Elia Viviani (Team Sky) and Riccardo Minali (Astana) for his third stage win this week. It was his eighth career victory at the Dubai Tour, one which sealed the general classification, where Kittel finished ahead of Dylan Groenewegen (Lotto-NL-Jumbo) and John Degenkolb (Trek-Segafredo). The overall success coincided with the team’s tenth win of 2017, a remarkable achievement giving that we’re just one month into the season.

“Today was a short and fast stage. We tried to control it from the very beginning and we did as planned thanks to a superb team effort, so hats off to the guys for their work. In the final kilometer, Fabio’s chain fell off, but fortunately I was well-positioned in the pack and notched up the victory to cap off a fantastic week for us, in a race which we enjoyed a lot”, said the 28-year-old sprinter of Quick-Step Floors, who won 8 of the 11 road stages he competed in at the Dubai Tour.
Next appointment for Kittel will be another race in the desert, the Abu Dhabi Tour (23-26 February), where he’ll line up after his excellent display in the Dubai Tour, which saw him win the overall standings for the second consecutive year, the points jersey and three stages, with which he took his all-time tally to 76 pro victories: “Coming into the race, our goal was to score a win and see what’s our condition. The results we got showed that we had a good winter preparation. Best sprinters in the world were here and it wasn’t easy to come out on top, but the team was incredible and very strong, and this only gives us more confidence for the following races. We were the dominant team here and I am happy to get this blue jersey, which fits well with our kit; at the same time I am super proud of my teammates and of what we’ve achieved here in a race I really like!”

BEING THERE: RALLY WOMENS CAMP