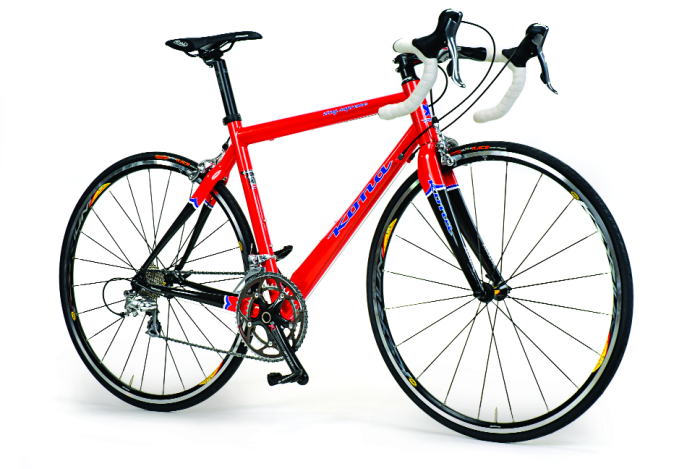 For the most part, riders on a budget still have the same wish list as sponsored pros or well-to-do wannabes-and that is everything, but at an affordable price. If that sounds like an impossible dream, then check out Kona’s $2899 Zing Supreme. Its carbon frame is built from Dedacciai Nero Corsa tubes and is furnished with a matching Dedacciai Black Blade carbon fork. Add a ten-speed Shimano Ultegra transmission with a carbon-fiber FSA crankset and throw on Mavic Ksyrium Equipe wheels, and you have the makings of a scorching-fast road racer.’Okay, that is all well and good,’ you might say. ‘But what about fit? Who cares about a great deal if it only comes in three sizes?’Ahh, but the folks at Kona actually ride what they make (in fact, that is the only reason that the Zing exists). The Zing Supreme’s compact frame is available in five sizes from 49 centimeters to 61 centimeters, so one of them should fit almost anyone out there. You had better like orange with carbon fiber detailing, though, because that’s the ‘choice’ of colors that Kona offers.

THE NUMBERS
Our 53-centimeter test bike weighed 17.8 pounds (8.09 kilos)-not extremely lightweight for a carbon ride, but it will keep you within striking distance in the lead group. Its head tube is on the slack side at 72 degrees, with a steep, 74.5-degree seat tube angle. The top tube (measured level) is 53.5 centimeters, chainstays are 40.8 centimeters, the bottom bracket height is 27 centimeters and the wheelbase is 76.9 centimeters. Adding up the numbers indicates that the Zing should be responsive under power and easy to ride at speed.

THE RIDE
Kona’s Zing feels quite rigid at the bottom bracket. It will take stronger legs than ours to flex it at the cranks, and that stiffness also translates to the saddle. Oversized Dedecciai seat and chainstays deliver a bit of a beating if the route takes you over broken pavement. On the upside, the Zing will put every Newton that your legs and lungs can muster into forward motion, which makes it a good climber and very handy at closing gaps-especially when doing so out of the saddle.

While the Kona moves forward and accelerates easily, it lacks some of the energetic feel at the pedals that we have come to expect from the most elite carbon fiber frames. That said, however, it simply excels at topping fast rollers that require massive yet metered bursts of power in very large gears. In short, the Kona has the kind of performance that is needed to control or respond to a competitive group ride.

Ergonomically, the Zing’s FSA Wing OS handlebar melds nicely with Shimano’s Ultegra Dual Control levers, keeping the controls within easy reach from above or below. The multi-radius drops, however, do not afford an optimum grip for sprinting purposes, although this is true for most bars using that configuration. For the remainder of the riding envelope, braking was sure and shifts predictable and intuitive-for which we gave the Zing a big thumbs up after descending twisty, narrow roads.

THE VERDICT
The Zing Supreme is a good starter for a young, aggressive racer or a hard-driving enthusiast who wants the rigidity of carbon in a bike that can be trusted in the mountains. We’d like a bit lower gearing (the Zing comes with a 25-tooth low), but not all of Kona’s customers are going to be climbing passes for entertainment like we do. While its weight is well over the magic 15.5 threshold that most carbon racers have established, the Zing Supreme can hold its own, based upon its no-hesitation acceleration and efficient power transfer while climbing. The Zing rides a little too rough for the recreational set, but it really shines when you turn up the heat.