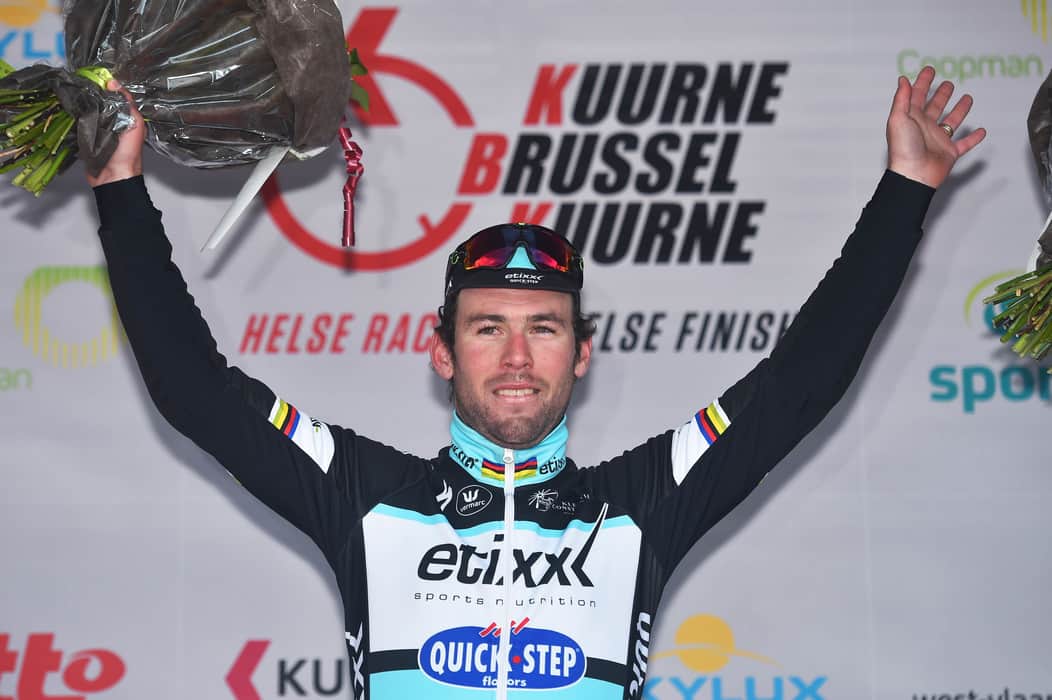 The Etixx-Quick Step rider made up for his teammates’ stunning defeat at Omloop Het Nieuwsblad the previous day when three riders were outsmarted by Team Sky’s Ian Stannard at the finish.

Cavendish, who also won this race in 2012, beat Norwegian Alexander Kristoff and Sky’s Italian sprinter Elia Viviani at the finish. It was the Manxman’s sixth victory already this season.

But the first full classic race of the season, the Milan-San Remo race, is on March 22.

Quick-Step rider Mark Cavendish used a little bit of improvisation in the hectic finale of 193km Kuurne-Brussel-Kuurne on Sunday, and finished the job of his hard working teammates with a victory to close out the Spring Classics opening weekend. Alexander Kristoff (Katusha) was 2nd, and Elia Viviani (Team Sky) 3rd.

Philippe Gilbert (BMC Racing Team) tried to thwart the efforts of various leadout trains inside the final 5km, attacking with 4.7km to go and getting as much as an 11″ advantage over the peloton with his surprising solo attack. But the peloton timed their effort well, and he was caught inside the final kilometer. Because of the hectic chase, wind, and the parcours, the final few hundred meters became chaotic without any real control on the front of the peloton. Zdenek Stybar took Tom Boonen and Mark Cavendish up near the front, and Cavendish then moved quickly to the wheel of Kristoff at the front before launching his race winning sprint.

Etixx – Quick-Step sealed the win after another day of being present in all the actions. An attack by Sep Vanmarcke on the Oude Kwaremont, with Boonen on his wheel, led to a formation of 19 riders that held a 38″ advantage with about 39km to go in the race. The group included Stybar, Boonen, Nikolas Maes, Cavendish, and Yves Lampaert. But the group was eventually brought back in anticipation of a group arrival. Katusha controlled the front going into the final 10km, and Team Sky eventually swarmed the front before Gilbert launched his solo effort. Etixx – Quick-Step was one of several teams who had to chase hard to catch Gilbert.

IN MARK’S OWN WORDS
“I am super happy to win here in Kuurne,” Cavendish said. “Raced it two times and won it two times. Especially after the unfortunate result of yesterday, it was nice to get a win today on the Classics Opening Weekend. The lads were super good. They committed 100 percent to me the whole day. We had a strong team here and they looked after me. Even in the front group that formed after the Oude Kwaremont, there were 19 guys there and we had five of our riders present. I think we’re one of the strongest teams and this shows the strength and depth of Etixx – Quick-Step. You saw it yesterday too. I mean, sure they didn’t win, but it was still an incredible display of strength by the team. So, we did the same today and to be caught, and flip the table so everyone then became 100 percent committed to the sprint, it was great. Tom’s won here three times, but he said on the bus this morning that he’d be my leadout today. It could have been easy for him to want to go for his fourth win. But to commit for the sake of the team, and do what we had to do to win a race here is nice. Everyone turned their eyes to today and it was a good atmosphere from before the race all the way to the finish line.

As for the sprint, it was far from easy against guys like Kristoff and Viviani. Kristoff is one of the best sprinters in the world and he is in super form. I’m proud to get a victory in my first sprint against him this year. It was hard all day and it wasn’t easy in the sprint. But I had great support from Etixx – Quick-Step and I’m happy to finish the job for the team. I think we’ve had a dozen wins now, and this is already a fifth of what we had last year for the entire season. I’m happy that I’ve contributed six of them, including my overall victory in Dubai. Everything is going well and I’m super motivated with this kind of support from Etixx – Quick-Step.

Now I go next to South Africa for Cape Argus to represent Etixx – Quick-Step, and our partner Klein Costantia. It will be nice to go down there, see our owner Mr. Zdenek Bakala, and also support the charity action of MAD Charity.  I will then come directly back for Tirreno-Adriatico. I am very happy with my form and we will see what happens next.”