Alpecin-Fenix’s Jasper Philipsen won a mass bunch sprint on the second stage of the Vuelta a Espana on Sunday, edging out Fabio Jakobsen and Michael Matthews with a deft last minute effort.

Vuelta champion Primoz Roglic retained the overall leader’s red jersey while Philipsen took the green sprint jersey thanks to his sprint-finish win after a 103 mile flat run from Caleruega to Burgos in northern Spain in 92F heat.

Jumbo-Visma’s Roglic started the day in red thanks to his opening day victory, also here in Burgos, over a short individual time-trial. His key rival, Ineos Grenadiers’ leader Egan Bernal, finished safely in the bunch Sunday, as did his Ecuadorian lieutenant Richard Carapaz, who as Olympic road race champion was wearing a gold helmet on Sunday.

Another Ineos team member in Briton Adam Yates lost around 30 seconds on the day, dropping to 51 seconds adrift of the leader, and several riders were held up by a late crash a few miles from the finish as teams jostled for
position.

EF Education-Nippo’s Hugh Carthy was also caught up behind the crash and lost 38 seconds in the overall.
The powerful all-rounder Roglic insisted he had little knowledge of the stage ahead saying of Monday’s mountain pass finish however “from what I can see it’s a super hard climb, we will have to give it everything. The stage will be nervous again, too, as it could be windy on the flatter part of the course, and then on the climb we can expect some time gaps between The GC guys.” 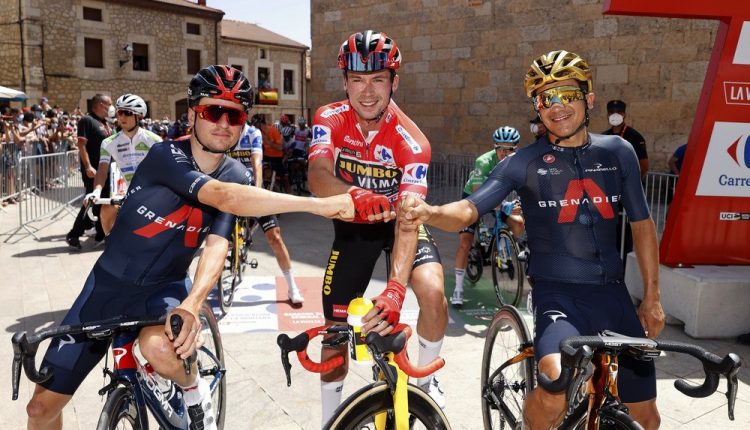 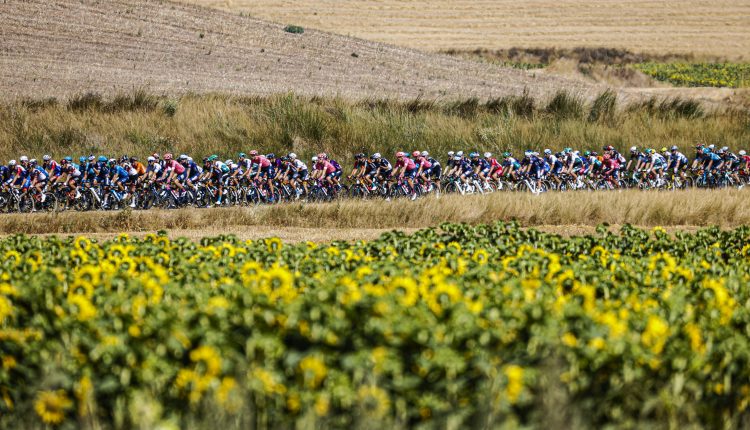 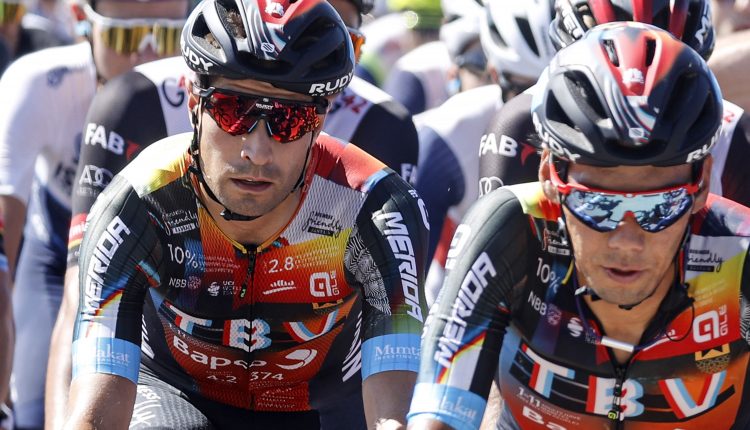 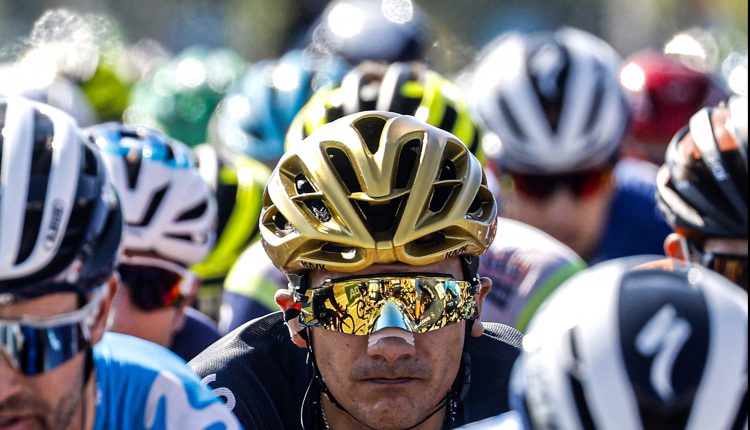 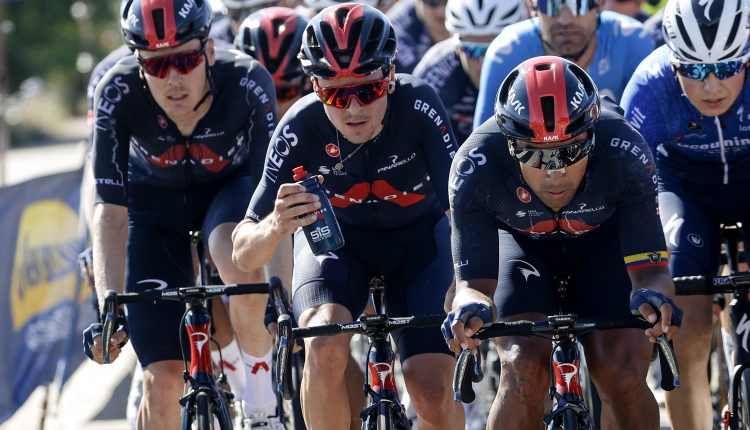 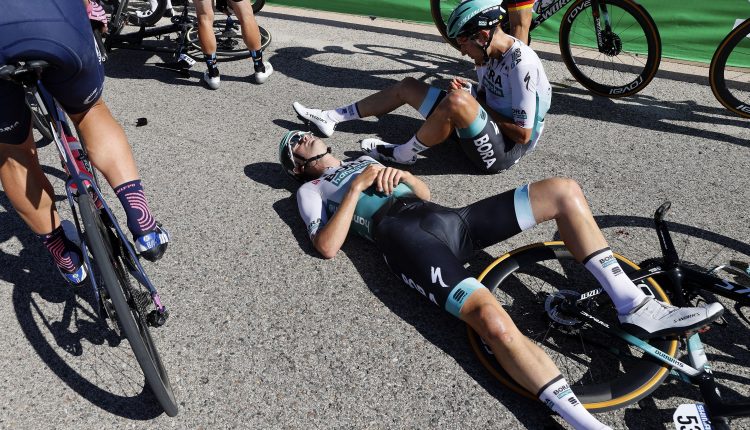 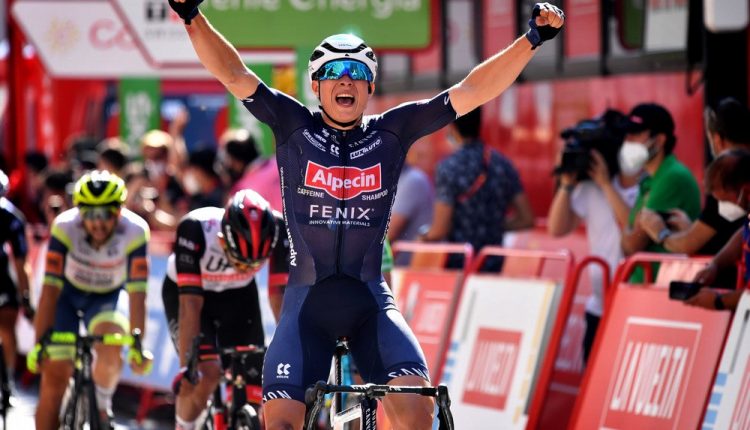 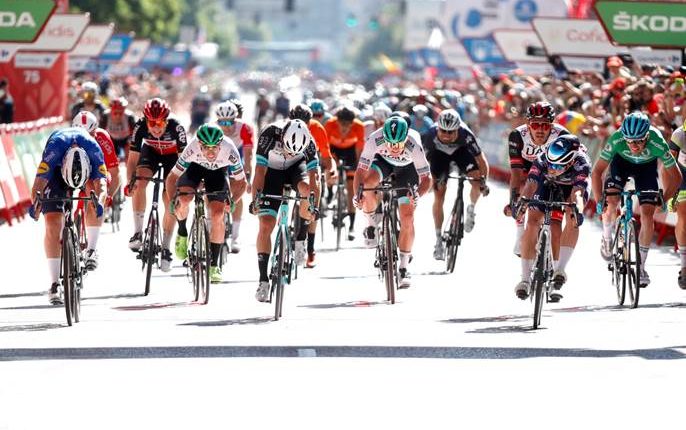 The stage two victory means Philipsen rounded out a trio of victories for the second-tier team after Tim Merlier won the first bunch sprint on the Giro d’Italia and on the Tour de France this year.

“It just shows how everyone from the team is really motivated,” said Philipsen, who finished in the top three six times on the Tour in July.  “I had a lot of support and this is how we can win sprints. Each of us can be very happy tonight and we start this Grand Tour in a good way.”

The team celebrated vigorously at the finish line on the outskirts of the city with Philpsen shouting to his teammates: “Great team effort.”

Dutch runner up Deceuninck Quick-Step’s Jakobsen can also be happy with his return to form after suffering almost fatal injuries on the Tour of Poland a year ago when crashing into a pole during a bunch sprint and losing all his teeth.

Philipsen beat him by centimeters after gambling on an inside run near the barriers, while Jakobsen went the long way round and just missed out.  Olympic mountain bike champion Tom Pidcock said on Saturday he had a horrible day, an on Sunday stopped racing with around 3km to go and cruising home dead last. Maybe saving his powder for Monday on what is his first Grand Tour.

The third stage is the first summit finish, coming after a long rolling run, with sections of the final ascent at 17 percent gradient that will create major gaps in the finishing times.