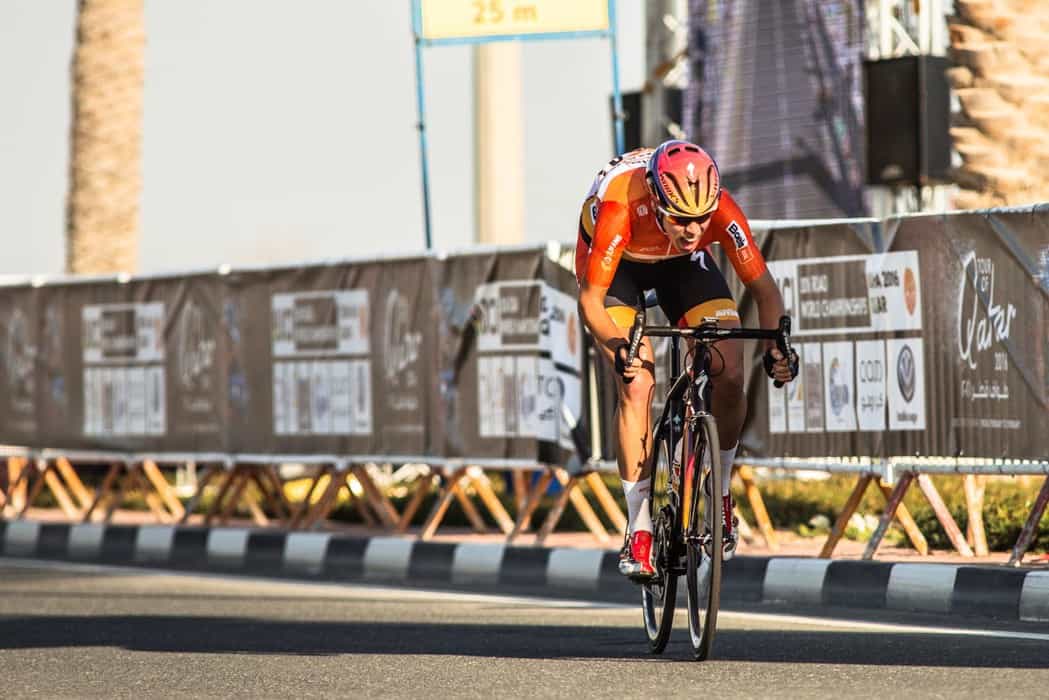 ASO
A year after her last stage win, already at Madinat Al Shamal, Ellen Van Dijk made the best of her time-trialling skills to conquer her third success in Qatar. The Dutch rider, part of a breakaway group that took off as soon as the first few kilometers of a wind swept day, powered away in the last moments of the race. She was never to be caught and triumphantly crossed the line on her own, clear of Kirsten Wild and Lauretta Hanson. The golden jersey changes shoulders and goes to Germany’s Trixi Worrack.

A nightmare for many, a fantastic opportunity for others: as expected the wind showed up on the Ladies Tour of Qatar for the queen stage of the event, the loop around Madinat Al Shamal. 87 riders gathered together for the start of the 112-km race by the splendid Al Zubarah Fort, first ever UNESCO World heritage site in Qatar.

With the wind blowing hard from the north-west, the action started as soon as the very first kilometres of racing. Indeed, at km 2, 13 ladies powered away led by stage 1 winner and five-time winner of the Tour, Kirsten Wild (HPU). Eager to hit back after suffering both a broken chain and a crash yesterday, the Dutch woman, wearing the points silver jersey, made the best of the conditions, taking with her the likes of Ellen Van Dijk (DLT), Trixi Worrack, Romy Kasper (LPR), Gracie Elvin (OGE), Shelley Olds (CPC) and best young rider, Anouska Koster (RBW). Trapped behind, golden jersey, Katrin Garfoot (OGE) reached km 5 with a 50’’ deficit.

The gap carried on increasing on the way to the circuit around Madinat and reached a maximum 2’50 at km 50 between the front group of 12 that had lost French rider Jeuland, and a pack including Garfoot, and title contenders Amy Pieters and Chloe Hosking (WHT). At the first passage on the line, struggling against the strong headwind, the leaders saw their advantage drop down to 2’. The first intermediate sprint of the day, at the second passage on the line (km 72) was claimed by Elvin ahead of Koster and Hanson (AUS), while the front group could still enjoy a 1’55’’
advantage.

The gap carried on dropping but the front ladies continued their strong efforts. At the fourth passage on the line (km 99), the leaders’ advantage had dropped to 55’’ as Hanson captured the second intermediate sprint ahead of Van Dijk and Wild. Moments later, with just under a lap to go, Gracie Elvin took off on her own for a long courageous effort. The Australian reached the final 10-km mark with a slim 10’’ lead. She was eventually caught at km 108.

It was still looking good for the front group, enjoying a 45’’ advantage with 2kms to go. Like a year ago, at almost the exact same place, Ellen Van Dijk powered away. The 2013 World time-trial champion managed to stay clear of her chasers and victoriously crossed the finish line with a 7’’ lead over Kirsten Wild and Lauretta Hanson, second and third on the day. After claiming the overall event back in 2011, Van Dijk captures her third stage success in Qatar.

Fifth of the day’s race, Trixi Worrack who had finished second yesterday, conquers the overall lead and the golden jersey going with it. With one stage to go, the German has a 17’’ lead over Romy Kasper and 31’’ over Van Dijk. Kirsten Wild keeps command of the points classification (silver jersey) while Australia’s Hanson claims the white pearl jersey for the best young rider of the event.

Tour of Qatar, The Finale