Piancavallo, Italy, May 26, 2017 (AFP) – Team Sky’s Mikel Landa paid
tribute to late Italian rival and friend Michele Scarponi after another gutsy ride in the mountains finally paid out with victory on the 19th stage of the Giro d’Italia Thursday.

Scarponi, 37, was set to lead Astana’s bid for podium glory at the 100th
edition following the injury-forced forfeit of Italian team leader Fabio Aru. But weeks before what was to be one of his final Giro campaigns, Scaroni was killed when he was hit by a van while on a training ride for the three-week race. Pictures and banners commemorating the popular Italian have been omnipresent throughout the race, which began in Sardinia on May 5. And days after Scarponi’s widow spurred Italian Vincenzo Nibali (Bahrain) on to victory on the ‘Queen’ mountain stage to Bormio, Landa, too, had Scarponi on his mind as he soloed to victory on the final summit finish at Piancavallo.

“I lost a friend just before the Giro, and every day I think about him,”
said Landa, who finished a close second to American Tejay Van Garderen (BMC) on Thursday’s 18th stage to Ortisei in Val Gardena. “This was a very nice way to commemorate him.” Landa’s win has soothed the pain of yet another underwhelming campaign on the three-week Italian race, although the classy Basque rider hinted he might
be looking to pastures new. When asked if he would still be with Team Sky next year, he said: “It’s possible.”

Beginning the race as Sky’s co-leader along with Welshman Geraint Thomas, their pink jersey ambitions ended on stage nine when both were among a group of riders brought down by a police motorcycle on the climb to Blockhaus. But while Thomas eventually pulled out due to injuries suffered in the spill, Landa ploughed on in the hope of claiming a stage — and showing Sky he fully deserves their full support for a grand tour campaign by his own.

“I had a lot of problems in the first week so I had to refocus and my aim
was to get here to the final week in good condition, and try to win a stage,” added Landa. “I tried very hard to win a stage this week, I came close yesterday (Thursday) and finally my efforts paid off. “It shows that, if you still have the condition, you should never give up and to always believe in yourself. “It’s been a good third week for me and has confirmed to me that I should try to aim for a grand tour win myself in the future.” 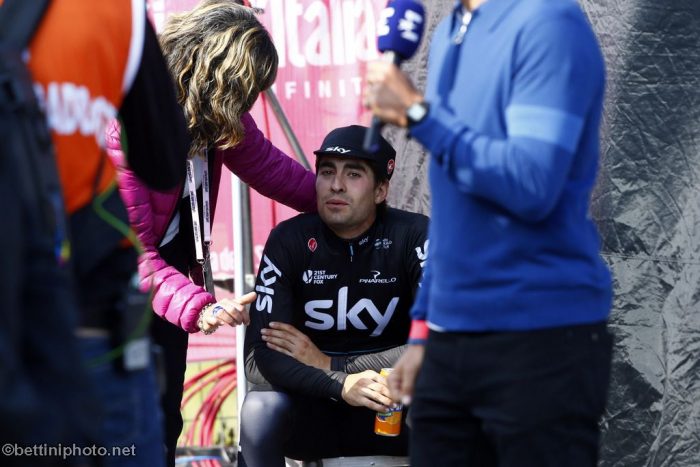