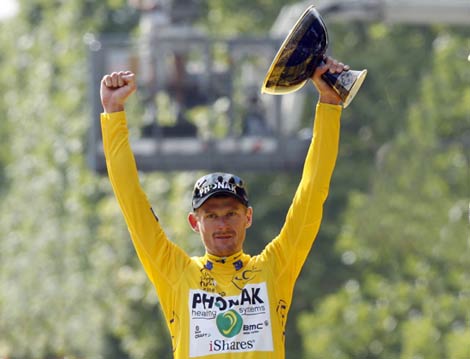 Lausanne, 30 June 2008 ? The Court of Arbitration for Sport (CAS) has dismissed the appeal filed by the American cyclist Floyd Landis and has confirmed the initial decision issued by a Panel of the American Arbitration Association (AAA) on 20 September 2007.

Consequently, Floyd Landis is disqualified from the Tour de France 2006 and is suspended for a period of two years starting from 30 January 2007. Floyd Landis has been ordered to pay the sum of USD 100’000 to the United States Anti-doping Agency (USADA) as a contribution towards costs in the CAS arbitration.

In it’s dismissal, CAS found that: “The LNDD is a WADA-accredited laboratory which benefits from the the presumption that it conducted sample analysis in accordance with international laboratory standards, and that (Landis) as not rebutted this presumption by showing that a departure from the International Standard occurred.”

CAS concluded from the evidence presented that the “presence of exogenous testosterone or its precursors or metabolites in Floyd Landis’ sample proved that he violated the anti-doping rules of the UCI”.

Landis made a short statement thorough the office of his attorney Maurice Suh,saying “I am saddened by today’s decision. I am looking into my legal options and deciding on the best way to proceed.”

Landis attorney Maurice Suh elaborated, saying “We are very disappointed in the result. The evidence strongly supports Floyd’s innocence. We maintain that the French laboratory’s work violated proper procedures and that these violations were not simply technical in nature. They resulted in the inaccurate findings at the heart of this case. CAS’s decision, which does not give credence to these violations, does little to require that laboratories and anti-doing agencies are held to the same high standards as are athletes.”