With the 2020 race hardly in the history books, it's time to get ready for next year

Even though the Covid delayed 2020 running ended just a few weeks ago, the Tour de France promoters are coming out of the gates with a preview of the 2021 edition which looks like it will be as challenging as ever. 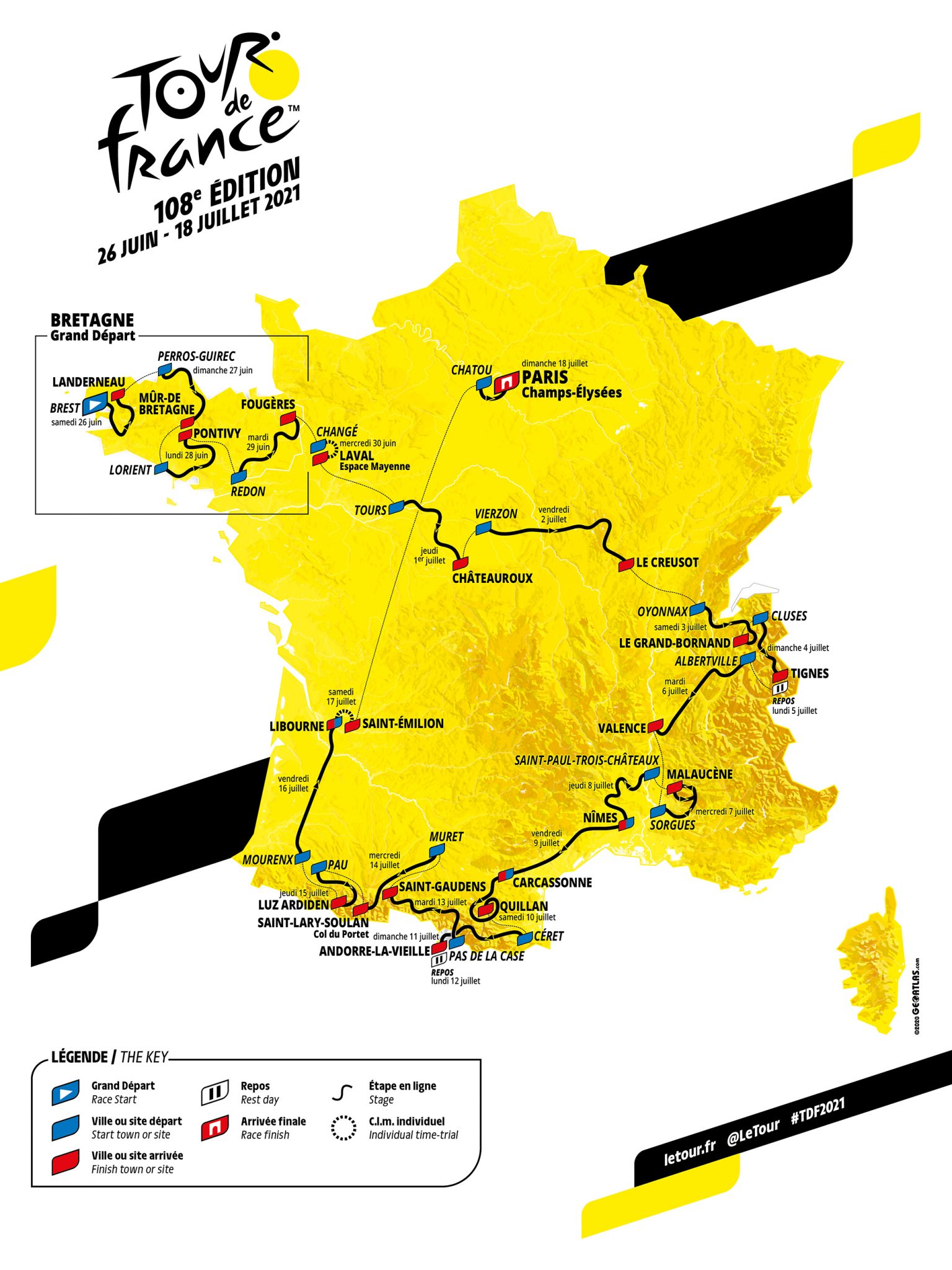 The route of the 2021 Tour de France, which is due to run from 26 June to 18 July, was presented on the set of France Télévisions’ Stade 2 weekly program today. After the Grand Départ in Copenhagen and Denmark had to be postponed to the following edition, this time the show will get on the road in Brittany with four stages tailored to punchers and sprinters.

The 2021 route has been fine-tuned to keep the suspense going until the end. Climbers will get three opportunities to gain time on summit finishes (Tignes, Saint-Lary-Soulan Col du Portet and Luz Ardiden), but riders will also have to make use of their descending skills to win in Le Grand Bornand, at the foot of a “revamped” Ventoux and in Andorra. The addition of two individual time trials with a combined length of 58 kilometres will also be a decisive factor in the strategies of the riders.

The 108th Tour de France will feature a ground-breaking route with a double serving of climbing. Contenders for the overall victory will have to be on high alert from the get-go, lest they crack on the two climbs up the Mûr-de-Bretagne, which will be tackled from a different side in the stage 2 finale. Ten days later, they will have to put on another show of strength on the slopes of the Mont Ventoux.

The Giant of Provence, which is making its first double appearance in a stage, will be tackled from two different sides before plunging down to Malaucène. In between these two key dates, the riders will have already faced new challenges, including four stages in the four departments that make up Brittany —from Brest to Fougères— riddled with hazards such as coastal winds and the hills of the Armorican Massif. The Signal d’Uchon, a recently discovered climb in the Morvan, will decide the stage to Le Creusot in its first appearance in the race.

The return of the first-week individual time trial will provide an early indication of the pecking order, which the climbers will do their best to shake up in the two grueling Alpine stages finishing in Le Grand Bornand and in Tignes, just before the first rest day.

After that, the Pyrenees will dispel any remaining doubts in five action-packed duels in the high mountains, combining the brand-new, spectacular Col de Saint-Louis on the road to Quillan with absolute classics like the Peyresourde – Val Louron-Azet – Col du Portet and Tourmalet – Luz Ardiden sequences. It will be do or die for the kings of the mountains, who will have to grab every second they can if they are to fend off the toughest power riders in the 31 km run through the vineyards of Saint-Émilion on the eve of the finish on the Champs-Élysées.

While the destiny of the Yellow Jersey will probably be decided in south-western France, the fight for the green jersey will take place all over the country, with no fewer than seven stages likely to fall to the sprinters as long as their teammates can keep any breakaways on a tight leash. Stage hunters will also get numerous opportunities to thwart the peloton.

LA COURSE BY LE TOUR DE FRANCE WITH FDJ TO TACKLE THE MÛR-DE-BRETAGNE
Since 2014, the women’s peloton has raced on the Champs-Élysées, tamed the Col d’Izoard and gone head to head in a circuit race at the foot of the Pyrenees. The eighth edition of the race will take the riders to Mûr-de-Bretagne, a hallowed site of cycling that has come to be known as “the Breton Alpe d’Huez”. While the men will face a double serving of the climb in the finale of stage 2, the ladies will tackle it no fewer than six times on 27 June 2021. The course is about 130 km long and consists of five laps of a circuit to be completed before the finish. Every lap will be tougher than the last!