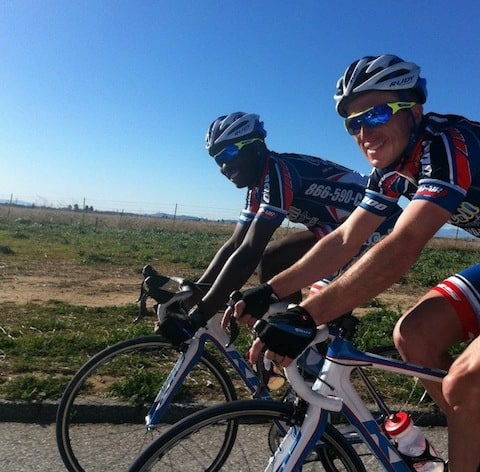 Share
Lee Muse (foreground) and Justin Williams having to tough it out in terrible SoCal weather.
For the second year, CashCall Mortgage Cycling team chose San Clemente, California as the place for its team camp. While many professional teams travel to southern California during the winter in search of warm weather, we are fortunate to call southern California home. It made things a lot easier on everyone to have the seven day training camp there. We didn’t have to travel far, and we knew all the roads to train on. At first glance, it was pretty much the same team camp as last year; however, things were different this time. New riders and new expectations were ever-present. You could feel it in the air; the team had shifted into a whole new gear.
The first day of camp was filled with loads of excitement. In just a few hours, we got to check out the sick new team cars and trailer, try on our new Jakroo clothes, do a photo shoot, eat dinner, and have a team meeting. As the night wound down, I couldn’t help but reflect on how far I had come to get here. It really set in that I had taken the plunge and committed to being a full time cyclist. I left my job two years ago with no expectations to go this far. Really, I just wanted to ride my bike for a few months and clear my head. I ended up getting really lucky when I met an amazing coach who saw potential in me, and helped me climb through the categories in just under a year. I spent last season with CashCall Mortgage learning the ropes racing at the NRC level, and this year I am looking to surprise people and be one of the most consistent riders out there. It’s not going to be easy, but I am doing everything I can to get there. My life has totally transitioned from being a recreational cyclist to a professional. Eating, sleeping, riding, stretching, resting, walking the dog…literally every aspect of my life is focused on improving. It sounds like an obsession, but once you learn to balance things, this stuff becomes second nature.
My training during the offseason was filled with loads of riding. No surprise there, but at this level, simply riding a ton of miles isn’t enough. When you train as hard as we do, you are always looking for that edge, that extra one percent to get a leg up on your competition. For me, Pilates is where I found that edge. This is the second year I have done Pilates during the offseason, and I cannot even begin to explain how beneficial it has been for me. Keeping your core strong is so important, especially when spending hours in the saddle. My lower back pain is gone, and I am stronger, more flexible, and more comfortable on the bike than I have ever been.
Breakfast in the team house is always interesting. Stefano Barberi, Dave Santos, Brian McCulloch, and I are the early risers. It doesn’t take long for the aroma of coffee to fill the house. Our first day of training was a mellow three hour ride. We had the team car following us with our photographer literally hanging out the back of the trunk. And you thought we were crazy! There were some funny moments on the ride for sure, like when Devan sprinted past us and yelled out, ‘Yeeeaaaaaahhhh,’ and when Justin sprinted in his little ring. We made fun of Justin for that, but truth be told, the joke’s on us. He could probably outsprint all of us in his little ring?that dude is fast.
After the ride, the team made the trek out to Sho-Air International. We are very fortunate to have such amazing sponsors supporting us. I really enjoy getting the opportunity to meet our sponsors, because they all have their own unique stories as to how they created a successful business, and why they are choosing to sponsor our team. I got to listen to Scott Tedro, president of Sho-Air International, tell us his amazing story of how he turned to cycling to save his health, and how he saved his company from near disaster. His passion and dedication inspired me. Scott’s business does tradeshow shipping on a global scale. They ship event materials which are extremely time sensitive, and there is zero room for error. Scott is a guy who doesn’t know what an excuse is. He gets the job done, no matter what. I’ll remember that the next time I’m having a bad day on the bike.
It didn’t take long to realize that all the guys on the team really get along. We aren’t like family, we are family. Our team has five riders returning from last year, and we added three more this year. It was pretty cool to see how the new guys, Stefano Barberi, Justin Williams, and Wes Holloway fit right in. Everyone brings their own personality and sense of humor. Hanging out with our team, there is never a dull moment. And honestly, there have been times where Anthony Canevari and Devan Dunn have made me laugh so hard my stomach hurts. 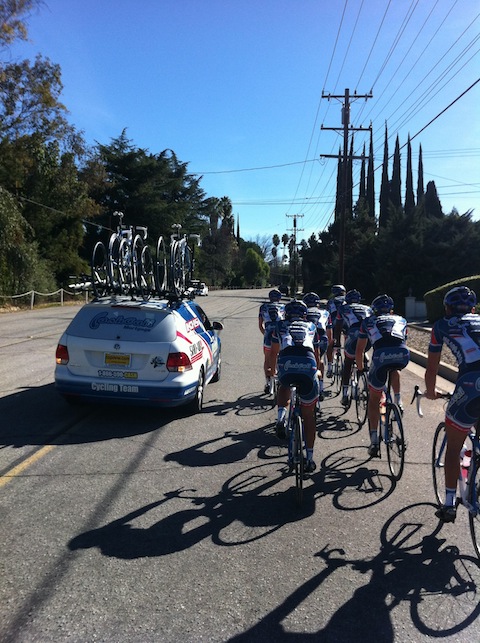 Since Redlands Classic is a huge priority for CashCall Cycling, they used a day of camp for some course recon.
We did a lot of riding through Orange County, North County San Diego, and Redlands. Every single guy worked hard and showed why they deserve to be on this team. Our longest ride was 125 miles, which we completed in less than six hours?not too shabby. Riding is fun, but I always looked forward to coming back to the house. Why you ask? Because the house has a ridiculous hot tub with a waterfall, and every night we had some family or friends over to cook for us. Let’s just say there are some pretty skilled home chef’s cooking for us. I think we need to hire you guys?seriously.
When we do our training rides, it’s a great opportunity to talk to your teammates and get to know them better. We ride two-by-two, so sometimes you can spend hours riding next to the same person. One of my favorite guys to talk to is Brian (aka The Gnome). The guy is hands-down the nicest person I have ever met. He has a crazy job and an even crazier background spent in motocross. He is sort of a jack-of-all-trades. If I ever have plumbing problems, something isn’t right on my car, or I need to know who something random like who won Stage 4 in the 2006 Giro d’Italia and how it all played out, he is the guy I would call.
The highlight of team camp was visiting the CashCall headquarters. I’m not saying this to give a shameless plug for CashCall, I really mean it. We parked out front with our team car, van, and trailer, each wrapped with gigantic CashCall logos, as well as our custom painted KHS bikes. With the team standing out there in their CashCall Mortgage kits, a few employees came outside to see what all the fuss was about. A few more people came out, and a few more after that, and then a lot more. Before I knew it, there were probably 200 people checking out our team. All the guys posed for impromptu pictures with the CashCall employees. The level of interest was mind-blowing. So many people were excited and supportive of us. For a moment, I felt like a celebrity. The best part was when employees started asking for our socks as souvenirs, to which we happily obliged. We got to meet the owner of CashCall, Paul Reddam. What an honor that was. I shook his hand and made sure to thank him for his incredible support. 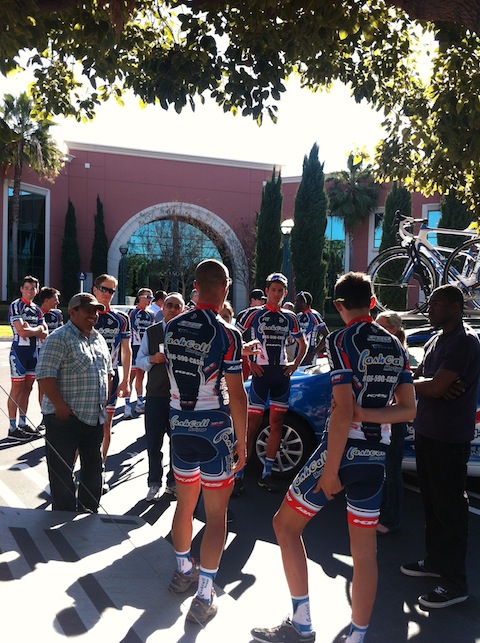 The team showing off their new duds and equipment to the CashCall Mortgage employees.
We finished up with a tour of the CashCall headquarters. The most incredible thing I noticed was how much the company has grown in the past year. It has easily more than doubled in size! There was something about being in that office, I don’t know whether it was the tone, the buzz of busy workers, or what, but you could feel that good things were happening there. I think we all left CashCall with a sense of pride in knowing that we helped contribute to that.
Team camp wrapped up with an omnium on our last training ride. With two sprints and two KOM’s, I knew the course and this challenge was right up my alley. I could tell everyone was dead tired from riding 95 miles with 9,000 feet of climbing the day before, but I was pumped to ride hard for one more day. The omnium was super competitive, and the final tally left Dave and I tied for the win, with Brian coming in a close third. Brian nearly spoiled it for everyone with a crazy attack in the final sprint, thanks to a little help from Justin.
Camp was a really awesome experience. I got to ride my brains out and have a lot of fun at the same time. It left me motivated to train even harder and pumped for the season. Racing starts in less than a week, and I can’t wait to test out my legs. It’s going to be an exciting year for sure!