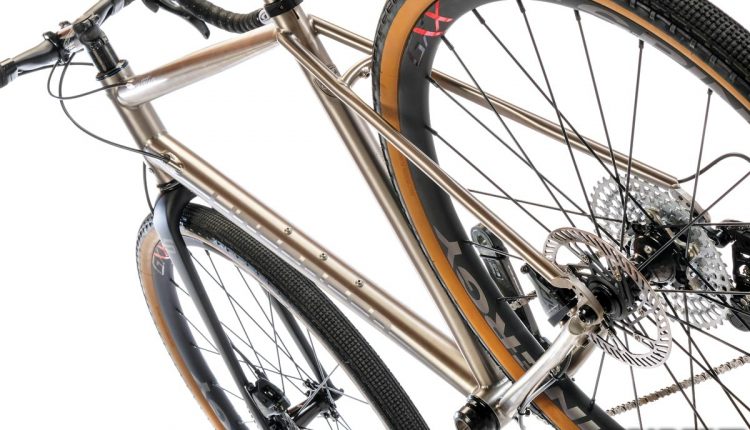 As one of America’s original houses of titanium, Litespeed has always been on the cutting edge of titanium bicycle design and American-based manufacturing. And when it comes to gravel bikes, Litespeed was among the earliest brands to get us a test bike (2015). Despite lacking what’s now become the “proper” tire clearance, the bike marked the beginning of the Tennessee brand’s journey towards a gravel horizon.

Here it is, seven years later, and Litespeed now has a family of dual-purpose bikes, with the Watia being the latest addition. As one of the few gravel bikes available in time for our annual foray to Emporia, Kansas, to compete in the Unbound Gravel (formerly Dirty Kanza), our test bike endured a double dose of different gravel conditions.

Litespeed has followed the trends in recent years to remain relevant by providing the latest drivetrains, geometries and parts. Campagnolo’s 13-speed Ekar drivetrain and Spinergy’s aerospace-spoke technology and carbon wheelsets were spec’d on Litespeed’s Watia. Situated in the center of Litespeed’s spectrum of gravel bikes, the Watia blends the performance-tuned refinements of the Ultimate Gravel frame and the adventure-ready geometry of the Cherohala.

“Up in the sunbaked foothills of Southern California, the Watia climbed the winding ridges with ease, thanks to the massive range of the 13-speed cassette.”

The Watia is available with either externally or internally routed cables, and our bike was the latter, which enjoys a $260 upcharge. It isn’t a fully integrated design, though, as the cable and two hydraulic hoses are visible from the handlebar, the shift cable and the rear hydraulic line are routed through the frame, while the front hydraulic line is run through the fork. Each tube is purposely shaped to amplify titanium’s attributes. The top tube is ovalized nearest the seat-tube junction to better capture frame vibrations, and the downtube is ovalized at the bottom bracket to add stiffness. The chainstays are asymmetrical with the drive side featuring a CNC-machined plate to increase tire and chainring clearance. It’s an eye-catching design that’s as attractive as it is utilitarian. The seat stays are skinny and bridged to allow for a fender. 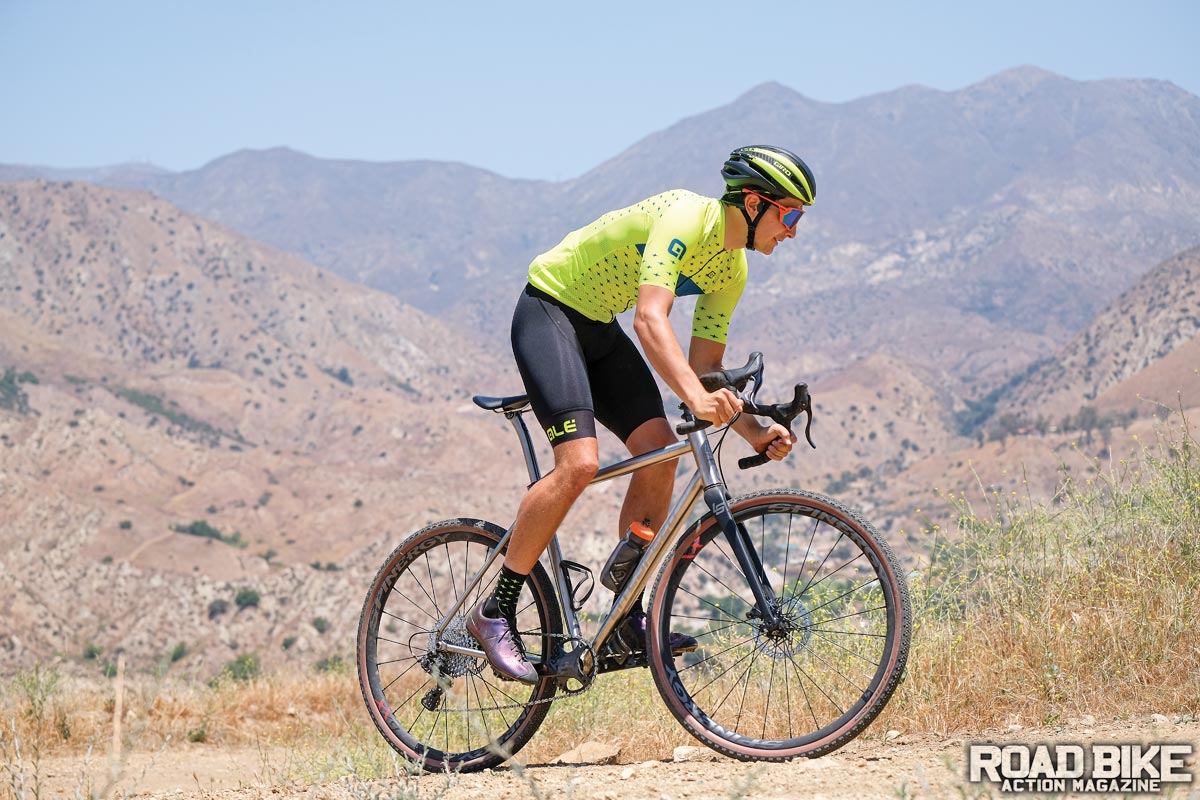 A 103.4mm wheelbase and 71.5-degree head tube angle are paired with a stack height of 60cm and a reach of 38cm for a middle-of-the-road geometry as promised. The Watia adopts the same wheelbase as the Cherohala, then takes a slightly steeper head tube angle than the Ultimate to maintain a responsive ride. It then relies on the elevated front-end geometry of the Cherohala and uses the same stack and reach measurements.

Litespeed offers a frame customization program that allows riders to choose either a standard logo or an etched version, as well as personalized fork choices, a T47 bottom bracket option, a titanium seatpost upgrade and additional frame mounts. Tire clearance maxes out at 45mm, thanks in part to the asymmetric chainstay design.

Campagnolo’s double-curve carbon brake levers are equipped with a single paddle behind the right shifter for downshifts and an extended thumb button for upshifts. This keeps the shift logic familiar to Campy’s road groupsets. The extended thumb shifter makes reaching the buttons easier when riding in the drops.

There’s only one derailleur that does it all in the Ekar line, the rear. An aluminum, carbon-reinforced polyamide hybrid construction and stainless steel small bits keep it durable.

Campy subtly brands the carbon cranks twice with the Ekar logo. The cranks feature replaceable rubber end covers, which are a thoughtful touch to prevent damage from all-too-common crank strikes in technical situations. The 38t chainring is in the middle of Campy’s offering between a 36t and 44t.

We rolled into Emporia atop a pair of 40mm Zipp Tangente Course G40 tubeless-ready tires fitted with a puncture protection strip that runs from bead to bead rather than just across the contact patch. This increases sidewall durability, which is important to prevent tears from the sharp flint gravel. The central tread is low-profile and fast-rolling, which makes it a solid choice for dry and dusty conditions. Last but not least, we reviewed inflated them to 35 psi in the front and 36 psi in the rear, which we calculated using SRAM’s tire-pressure calculator.

Litespeed is now offering Home Delivery as a direct-to-consumer service (see page 22), which we’re told is being adopted by a growing number of American bike manufacturers as their own version of a consumer-direct service. Our test bike was delivered to us by a driver (who is also an experienced mechanic).

“Over our handful of rides in the Flint Hills, the bike plowed through washed-out, rutted farm roads; sharp, unforgiving pitches; and wide-open, wind-lashed fields.”

With our bike tuned, saddle height set and pedals installed, thanks to the delivery service, little was left to be done setup-wise on our end. Direct-to-consumer bikes rarely come with such a simple assembly process, and Litespeed’s hybrid consumer-direct nature is elevated by the high-end delivery service.

Our testing grounds included long climbs and descents on local fire roads, twisty singletrack, Los Angeles roads and what can be considered the ultimate test for any gravel bike, the Unbound 200 course. 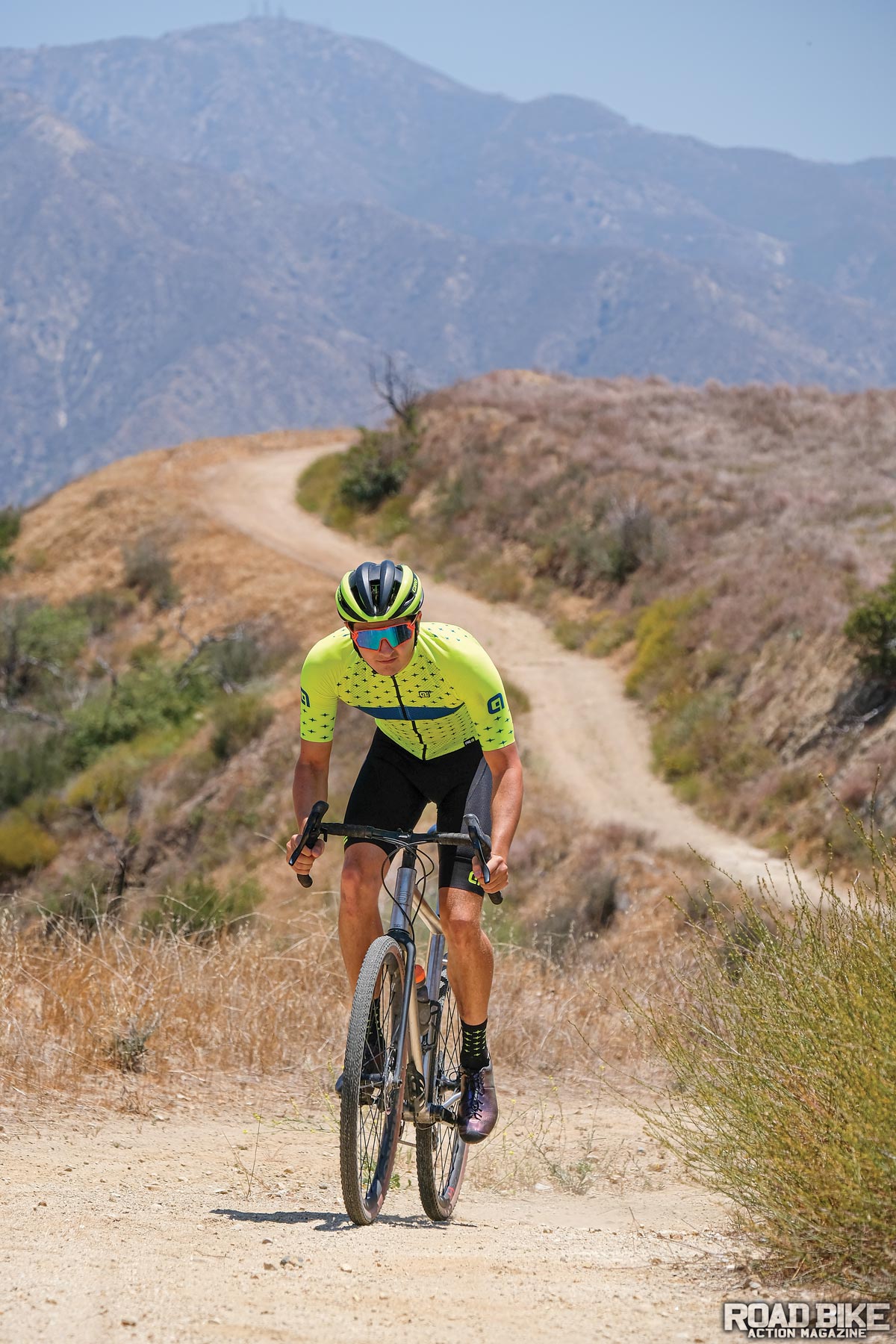 Up in the sunbaked foothills of Southern California, the Watia climbed the winding ridges with ease, thanks to the massive range of the 13-speed cassette. Campy’s one-button, one-function shift logic performs with its signature clunk for each shift. With the ability to shift up to four easier gears with a single push of the lever, the Ekar stands out when climbing. The thumb trigger ensures a single shift into harder gears and can be quick-fired with confidence. We did notice that the shifters may get stuck on the brake lever when we first rode them. This prevents another shift until the lever is returned to its resting position and is a bit annoying.

With each bump over the roots, rocks, ruts and sand on our local singletrack, we were reminded of the forgiving characteristics of titanium’s fabled ride quality. Litespeed’s purpose-crafted tube shapes help dampen the shock when we took a bad line and enhanced our ride when we chose the right one. In switchback turns the wheels tracked predictably, helping us stay in the saddle with less hike-a-bike when we were riding on some questionable terrain.

We felt most at home with the Watia on the rolling hills of the Kansas prairie. Over our handful of rides in the Flint
Hills, the bike plowed through washed-out, rutted farm roads; sharp, unforgiving pitches; and wide-open, wind-lashed fields.

There was, however, one product “learning” that came our way in Kansas by virtue of a flat tire suffered early on in the Unbound race. When we pulled the rear wheel from the frame, we were surprised when first the end cap and then the entire cassette fell off the wheel. It didn’t help that the end cap fell into some tall weeds, which necessitated a time-consuming search-and-rescue effort. Eventually, everything was reassembled with only time lost being the biggest issue. The learning? Be sure to use caution when removing the Spinergy wheel.

With Litespeed’s proven history of titanium know-how, the Watia is a well-balanced gravel bike. We enjoyed our time in the SoCal foothills as much as we did on the Midwest prairie. Given their titanium legacy and top-notch fabrication, it should come as no surprise that the Watia has gained a spot on our list of top gravel bikes of the year.

Litespeeds are listed at a premium price. Frames are available starting at $2115 for the externally routed option, with the most expensive build topping out around $6500. And given titanium’s famed durability, the case could be made that this may be the last gravel bike one purchases.

• Capable of taking on the rough stuff