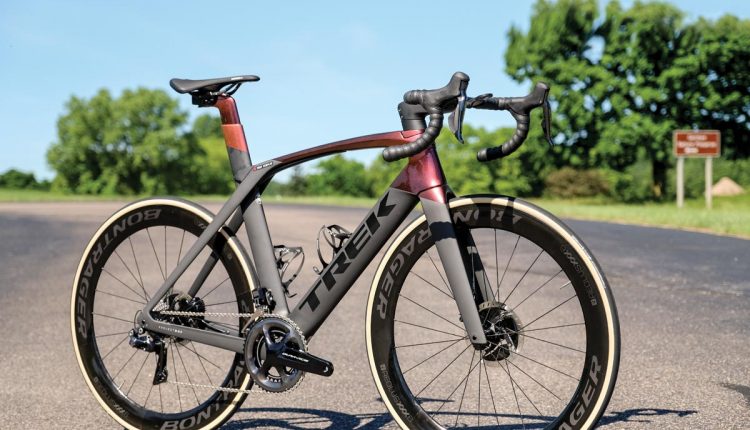 More than a bicycle manufacturer, the Trek family is made up of a handful of subsidiary brands that, in addition to well-known entities like Bontrager and Trek Travel, also includes a handful of back-end business units that support their vast empire of bike shops around the globe.

Like Harley-Davidson, Trek is a badge of manufacturing and marketing pride for the Badger State of Wisconsin. Created in 1976, the family-owned bike company laid the foundation for what has evolved into a modern facility located in the quiet town of Waterloo. From those humble beginnings, Trek has become one of the world’s biggest bike brands with sales revenue that is reported to top one billion dollars annually. 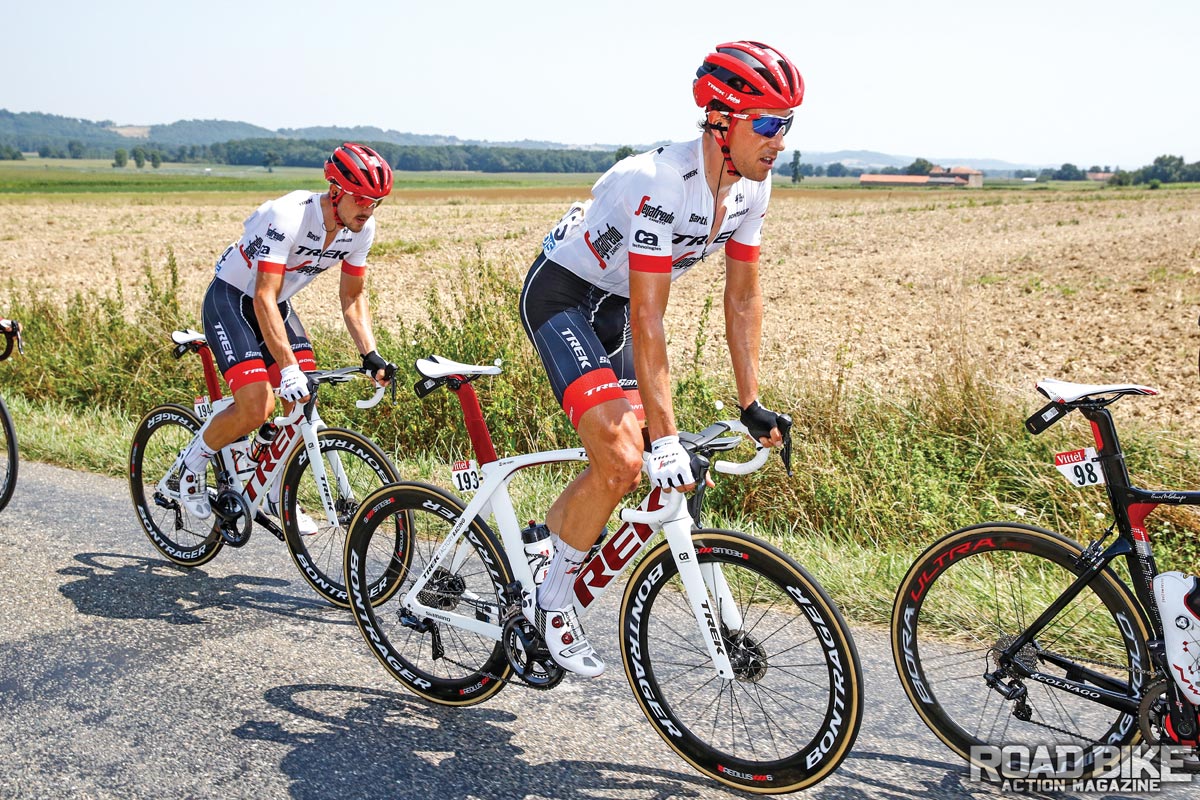 Trek invited us out to not only show off their latest new bikes, but to get the chance to meet the people who are responsible for their design. 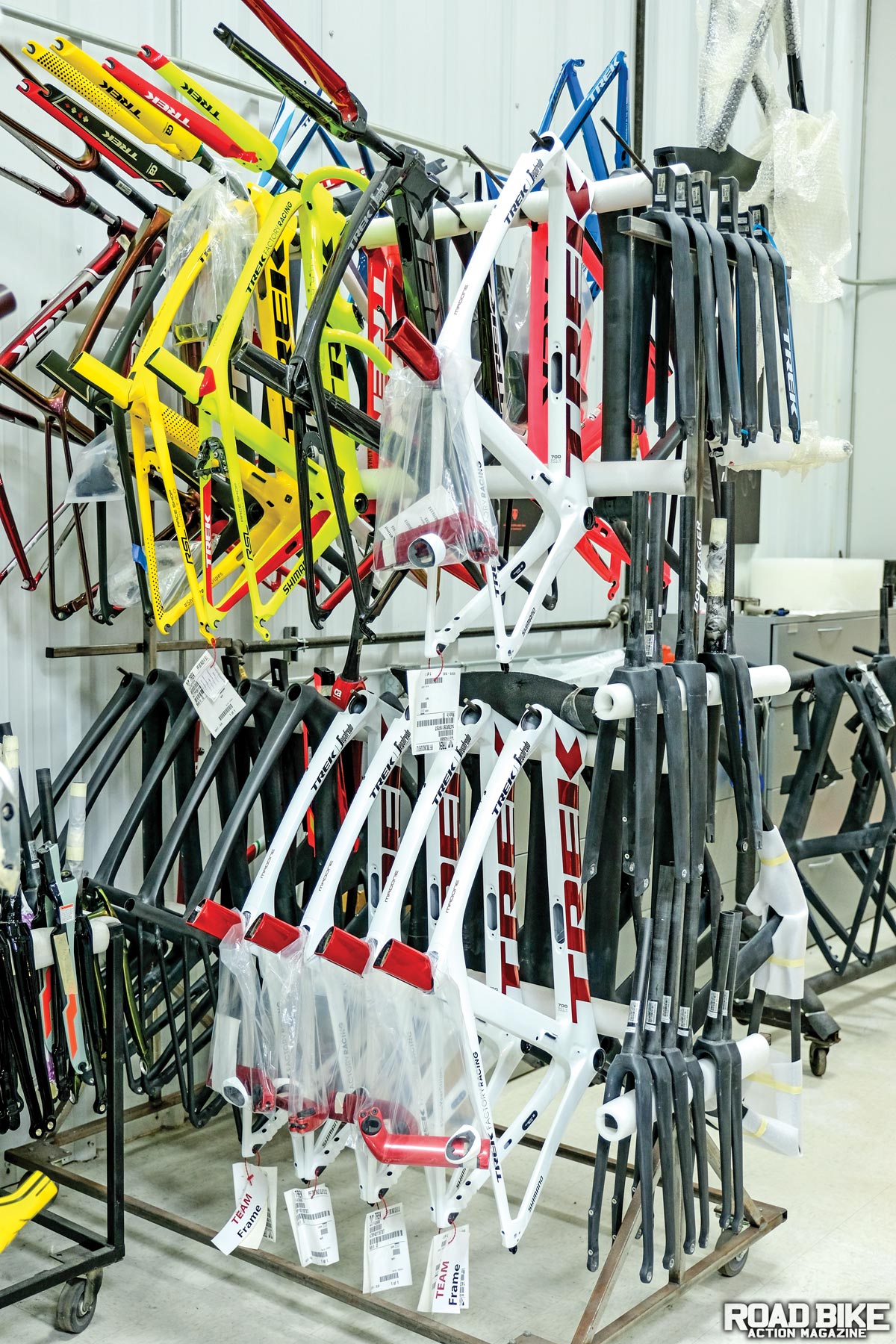 Of course, with our arrival coming just weeks before the start of the Tour de France, the big reveal was the new Madone, which is now in its sixth iteration. They also showed off the new Emonda ALR and a handful of new Bontrager accessories. With the Madone as their main focus, there were plenty of them to be found in the racks and throughout the facility tour. They were ramping things up for the load of Project One orders that all come through this facility. 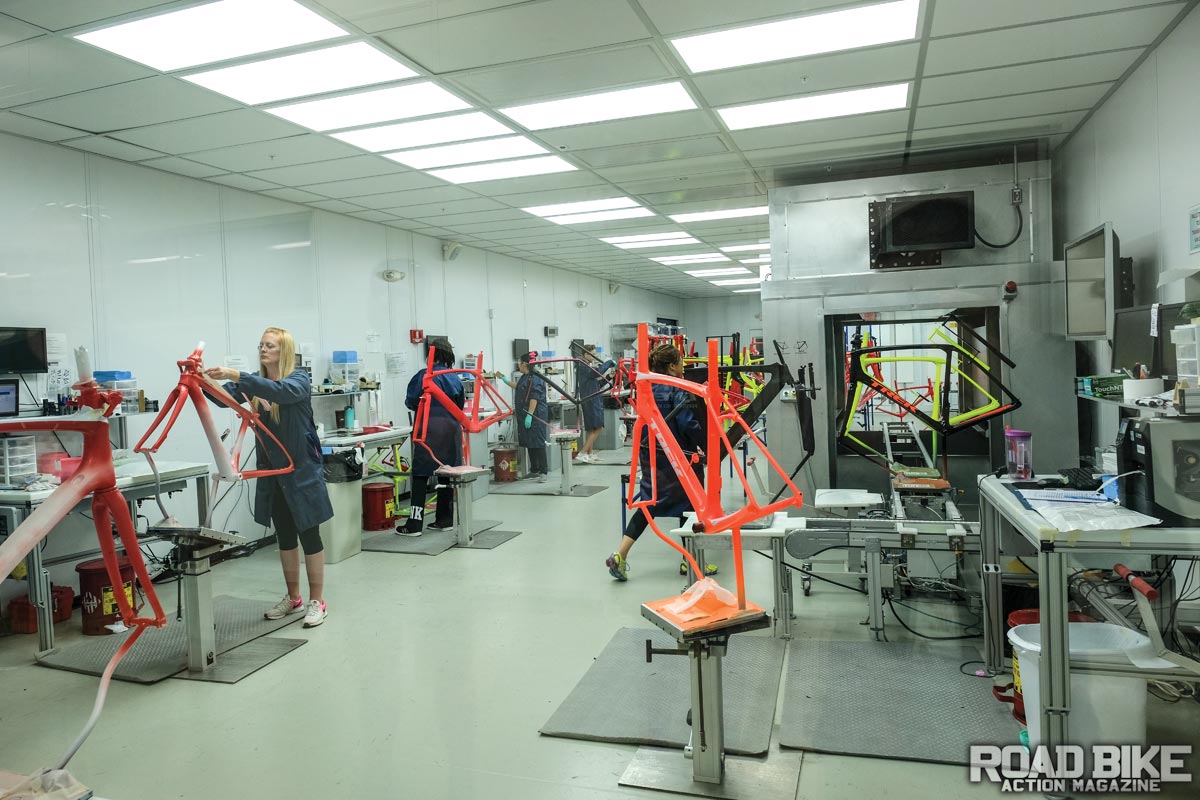 What was once nearly a football-field-size space that was filled with the manufacturing of aluminum, steel and carbon frames has now given way to the needs of Trek’s successful Project One build program, which is essentially a massive paint booth.

The Project One portion of the building is stunning. Seeing so many people dedicated to detail work is both rare and impressive. We watched as bare frames (shipped to Trek from their Asian production facility) were cleaned and prepped for their custom build. Next, one of their skilled artists begins the process of laying down the desired paint scheme. We were told that some of the more complex paint schemes can take up to 45 hours for the prep and finish work.

Following the paint, the frame’s next move is to the assembly line where they are meticulously built. Considering that so many people are ordering custom bikes and that Trek has dedicated the resources to fulfilling the orders is impressive to say the least.

We toured the machine shop where prototype frames and parts are made. This included everything from 3D-printed plastic frames to full-ridable test rigs and everything in between. This led to the durability and fatigue testing. There were dozens of test racks running specific tests to push the limits of materials and future designs. In addition to the in-house testing, Trek also purchased a wide swath of land across the street where they’ve built miles of trails so that they can roll from the factory and test new dirt bike products in real-world conditions.

They had a few of the new Madone frames mounted to show off their new and improved Isospeed suspension. With the frame on the fixture, it allowed us to see the system in action and how each part flexed and reacted to the bump forces.

With the stationary testing finished, we moved to the newly remodeled treadmill room. Trek has been using a large, custom-designed treadmill with replaceable slats for over six years. They have hundreds of slats that they can interchange to imitate a perfectly smooth road, all the way up to a 4-inch hole and everything in between. The orientation of the slats is what defines the terrain, with over 50 slats to complete the treadmill. This allows them to simulate real-world riding over all different sorts of terrain with laboratory accuracy and repeatability. They place sensors all over the bike as well as the rider, measuring riding forces in real time all while being recorded by a slow-motion camera for deeper analysis.

The design studio is where the magic happens and where loads of people all come together to create that final profile and design. The new Madone was a ground-up design, meaning they didn’t just modify or manipulate the previous model. They showed us photos from their meeting where the bike has hundreds of sticky notes covering it with suggestions and input. As we spoke to each person, it was as if we were speaking to an individual frame builder. The passion and dedication to achieve what they consider perfection was something that we rarely see in every employee when visiting big brands.

We had spent an entire day walking the floor of Trek’s headquarters, and we still didn’t even get to half of it. We were able to walk the warehouse where dozens of workers were boxing bikes and building wheels by hand, where deliveries were coming and going, and conveyor belts were moving items all over the sprawling facility.

Of course, with hundreds of people working within the walls, and the number of local eateries on the minimal side, Trek depends on a large kitchen staff to run the cafeteria where anything you’d like to eat can be ordered and made fresh.

It was actually while I stood in the food line watching a wholly diverse group of people ordering their food that the reality of what Trek represents dawned on me. From the big, burly types wearing their Green Bay Packers shirts ordering their burgers and fries to skeletal cyclists ordering salads, at its core, Trek represents an American success story. Sure, their frame manufacturing has all been shifted overseas, but they’ve clearly evolved with the times, allowing both bike shops and thousands of cyclists to keep rolling along.