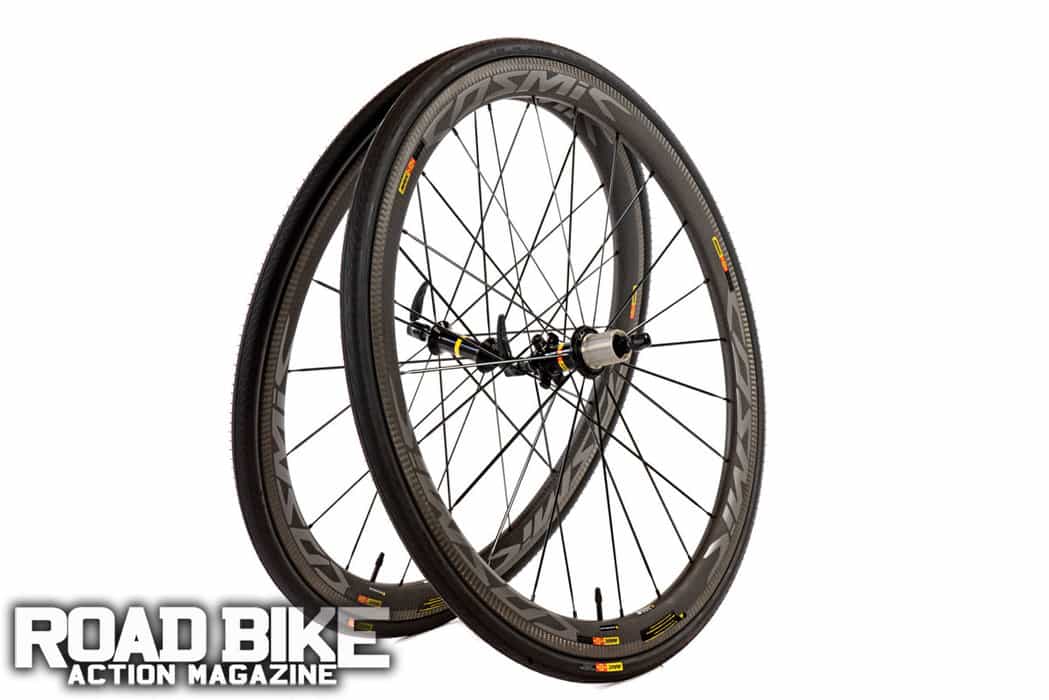 After their initial entry into the carbon-clincher arena with the Cosmic Carbone 40 C that hit the market in 2013, Mavic has now upped their game with two new true carbon clinchers—the 40mm-deep Cosmic Pro Carbon SL C and the 25mm-deep Ksyrium Pro Carbon SL C. Considering that the original Cosmic Carbone 40 C was actually a carbon-wrapped aluminum rim, these new wheels are a substantial leap forward in both technology and weight savings.

At first glance the Cosmic Pro Carbon SL C doesn’t look a whole lot different than the wheel that came before it, or any other medium-depth carbon wheel out there for that matter. A carbon-weave rim with black hubs laced together with aero spokes describes about 100 other wheels, yet when digging a little deeper you get a better sense of what’s behind the Cosmic Pro Carbon SL.

Back in March we visited Mavic headquarters in Annecy, France, for the official Cosmic Pro Carbon SL and Ksyrium Pro SL launch. We were shown the manufacturing process that leaves Mavic in complete control from start to finish, which is something few other carbon wheel brands are able to claim. Mavic has a carbon facility in Annecy for prototyping and small-batch production, while the majority of their carbon rims are made in other Mavic factories around Europe.

Eliminating the aluminum inserts that made up the previous rim helped bring the weight down by over 100 grams to 1435 grams for the wheelset, which is around 150 grams less than Zipp’s 303 Firecrest carbon clinchers. Other than weight, Mavic targeted safety to ensure some of the other woes carbon clinchers have faced didn’t affect the Cosmic Carbon SL C. Heat management is something that has troubled carbon clinchers since their inception over a decade ago due to the thick carbon brake track that holds onto the heat that builds up during braking. As heat builds from frequent and hard braking (think long descents), combined with the outward pressure of the tire and tube, rims without a high-enough glass transition temperature can fail (glass transition temperature is the temperature at which the physical properties would change, such as the composite brake track turning soft). Through the construction process that includes a new resin and a laser brake-track treatment, Mavic has brought the glass transition temperature to 392 Fahrenheit, higher than what would be reached outside of the test lab.

The Cosmic uses a 17mm internal rim width with a 25mm external width at the brake track and features a relatively blunt nose profile. They are laced to Mavic’s Instant Drive 360 aluminum hubs using an 18-spoke front and Isopulse 24-spoke rear pattern. The Isopulse spoke pattern uses radial lacing on the drive side and two-cross on the non-drive side to maximize drive-side dish, creating even spoke tension between the left- and right-side flanges. The hubs are available for use with either Shimano/SRAM or Campy, and there is an option for an XD-R driver. Mavic also offers the Cosmic Carbon Pro SL wheels in a disc-brake version in addition to a tubular option. For those tubeless road converts, you’ll be disappointed to hear that going tube-free is not currently an option.

Mavic includes the appropriate brake pads for the wheels and quick releases, in addition to their own Yksion Pro GripLink (front) and PowerLink (rear) tires in 25mm width. Each wheel also comes with a wheel bag for travel and storage.

We put over 2000 miles on the Pro Carbon SL Cs over a three-month period that included a little bit of every type of riding and condition. Over the course of that time, wear and tear consisted of the brake pads going through about half of their life and the rear tire succumbing to a sidewall cut, but not once did either wheel come out of true or require a hub adjustment.

It initially seemed that the laser treatment on the brake track would result in the need for brake-pad replacement on a regular basis since a whirring sound announced the pad’s contact with the rim, which we assumed meant the pad was the cheese and the rim was the cheese grater. That ended up not being the case, and the pads haven’t worn notably faster than on other carbon wheels we’ve used. Mavic’s objective of improving brake performance was accomplished as we feel the all-around stopping power is as good as just about anything we’ve tested with caliper brakes and a carbon rim.

With a 40mm rim depth and relatively rounded nose profile, it’s a very easy wheel to handle in the wind. Windy days didn’t add extra stress to the ride by having us hang on for dear life as each gust pushes you around like we’ve experienced on deeper-profile and V-shaped rims.

What could be better? There were occasions when having tubeless compatibility would have been appreciated, especially when dropping the pressure on pot-hole-riddled, busted-pavement roads. Making the wheels compatible with tubeless tires wouldn’t change any performance aspect or make them non-compatible with standard clincher tires, but it would give customers an option more are asking for these days.

The Cosmic Pro Carbon SL C is hands down one of the best carbon clinchers we’ve ridden. It checks all the performance boxes while achieving superior braking and, as our extended testing concluded, durability. If we had a wish list for the next version, it would be for Mavic to add tubeless rim compatibility. Compared to many of the other premium wheel brands on the market, the asking price is actually lower than most, especially once the cost of the included tires are factored in.

• Mavic quality from start to finish

The Most Important Tool That Every Roadie Needs for 2020