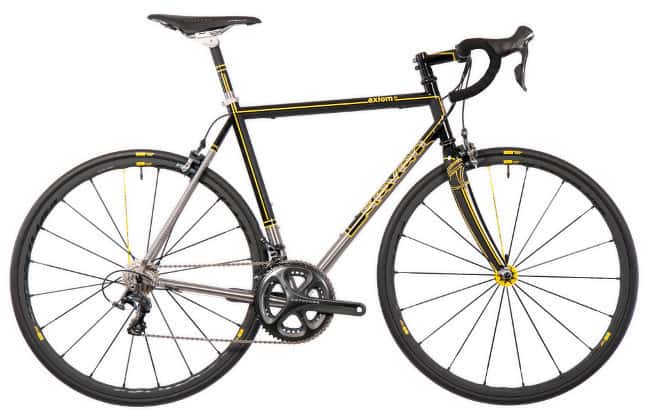 Seven Cycles has built a special edition bike in collaboration with Mavic USA as part of Mavic’s 125th anniversary celebration. The Mavic-inspired Seven Axiom SL features a limited edition wheelset and a special paint scheme that shows off its bare Ti frame, set off by gloss and matte black as well as Mavic’s signature yellow.

Seven Cycles founder Rob Vandermark said, ‘We have a long running partnership with Mavic, and of course we admire their history in this sport we all love, so we were honored to be asked to build this bike.’

‘We wanted to give each builder the freedom to make the frame a representation of the builders’ relationship with Mavic both professionally and personally, and hoped that  the Ksyrium 125 wheel-tire system would inspire the creative process as well,’ said Chad Moore, director of Marketing at Mavic, ‘The bikes will be released at our new brand communications center and Service Course in Los Angeles on July 10th.  We’re having a special pre-release at www.theradavist.com the day before.  This project was an opportunity for Mavic to connect with brands in the US who are innovators and standouts in the industry and we couldn’t be more please with the partners we’ve had in this endevour ? Seven Cycles has so much history in its walls that it was a natural fit for us to collaborate on this project.’

Mavic’s OEM manager, Larry Burke, said, ‘When we set out to make this year special, finding new ways to collaborate with the best bike builders in the world seemed like it would be fun, and of course it makes our wheels look even better. Seven really surprised us with the beauty of the paint on this bike.’

Seven’s Marketing Manager, Karl Borne said, ‘What we tried to do with this bike was something that looked extra sharp, but wasn’t beyond the reach of our everyday customers. On one hand, it’s a show bike, but it’s also a bike we would ride every day of the week.’

The Mavic anniversary Seven Axiom SL is built out with a Shimano Ultegra gruppo and Seven titanium componentry and retails for $9,395.  Once the launch and subsequent festivities are finished, the Mavic anniversary Axiom SL will be donated to the Davis Phinney Foundation where it will be auctioned off for Parkinson’s research.