Michael Shermer – The Man of Many Miles

A Race Across America pioneer looks back and smiles 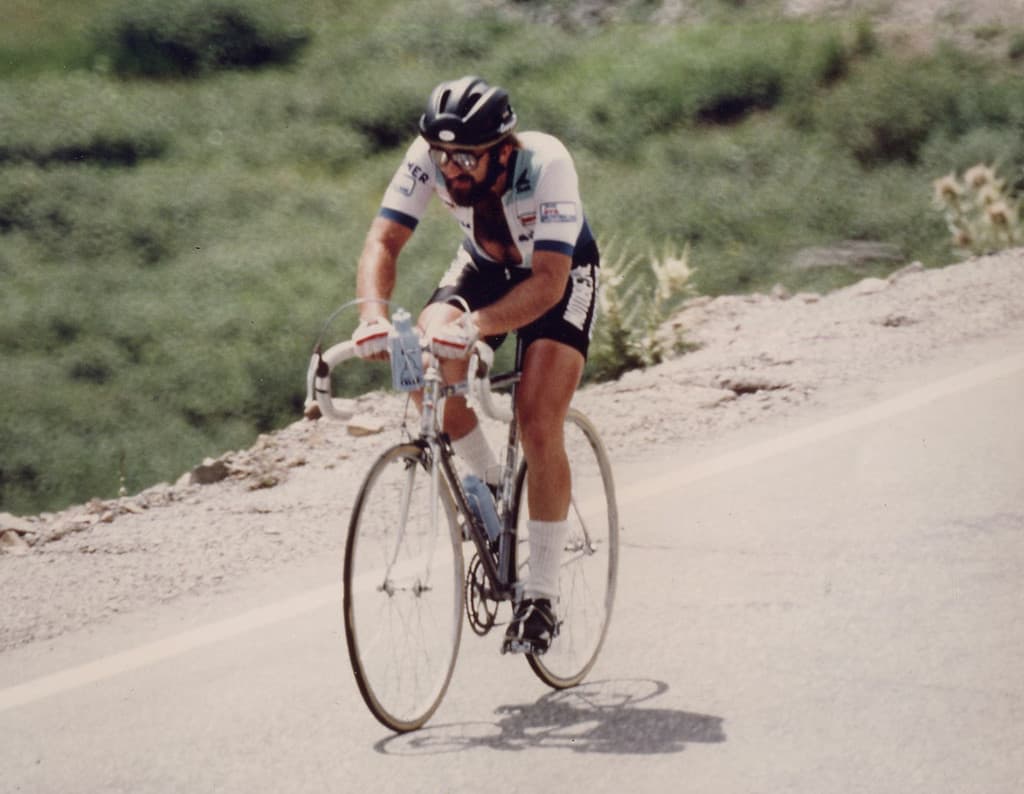 Share
By: Zap
It all began last winter during one of the Tuesday night training rides that circled the Pasadena Rose Bowl when the topic turned to the suffering and dedication needed for doing really long distance rides. We weren’t talking about 12-14 hour rides, we were talking about week long, interstate rides. My only brush with the concept of transcontinental riding was being an old friend of Victor Vincente of America (nee Michael Hiltner) who had set the double transcontinental record (36 days and 8 hours) back in 1975. 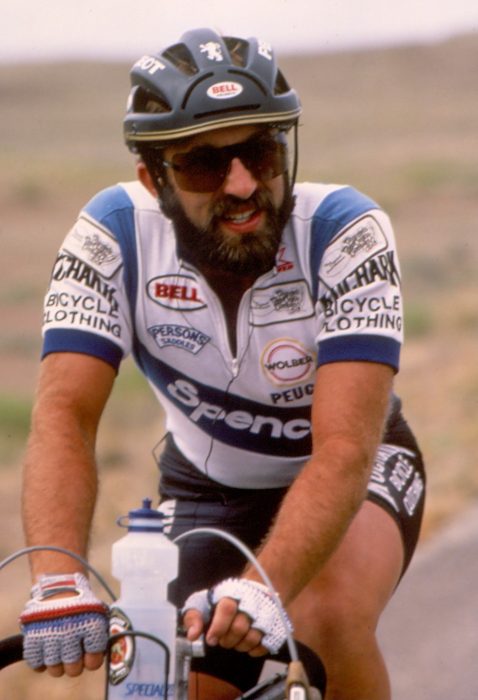 As the group of us pedaled along someone mentioned the Michael Shermer was actually local to the area and could often be found putting in miles in the roller coaster foothills that surround the stadium.

Shermer was a name I remembered reading about in Winning Magazine back in the 80s when I first took an interest in drop bar riding. Michael was one of four brave souls who competed in the famous Race Across America (RAAM). A race across America, the very notion of expending that kind of effort was anathema to me!

THE PEOPLE WE MEET

And then it happened. As I was tooling home from the Rose Bowl one day I came upon an old gent riding a Canyon Aeroad. Knowing the German brand isn’t sold in America, I pedaled alongside the guy to inquire about its provenance. As we pedaled along we started talking about all things bike
and eventually I asked his name.

I almost fell off my bike. “You mean the RAAM guy Michael Shermer?!” I asked in a most amazed state of disbelief. Turns out it was the Michael Shermer that I’d read about decades earlier. I immediately patted him on the back as we kept pedaling and simply said, “It is a real honor to meet you.”

Michael Shermer is the real deal. A pioneer whose cycling adventures are undoubtedly the stuff of legend. Here’s what he had to say about some of them. 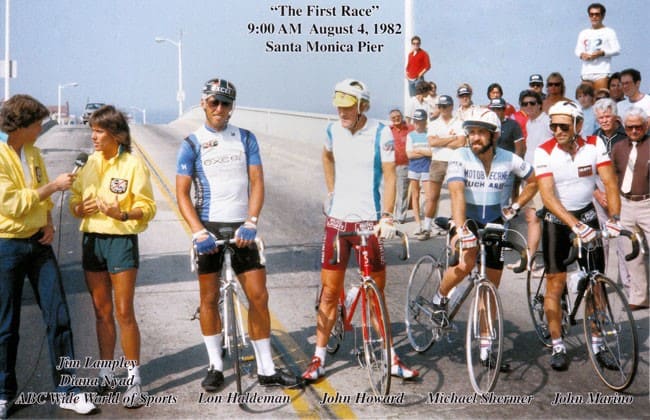 RBA: What was the first year you competed in RAAM? How many times did you participate?

Michael: I was one of the four cyclists to compete in the first RAAM in 1982 which back then called the Great American Bike Race. I broke the transcontinental record but so too did the two men in front of me, John Howard and Lon Haldeman. John Marino, who previously held the transcontinental record, finished 4th. The name change is a long story, but in brief, Marino coined the name Great American Bike Race but the agent we had, Jerry Kushnick (Jay Leno’s agent at the time), incorporated the race in his name only so when we wanted to go our separate ways in 1983 we had to incorporate a new company and name for the race, thus RAAM.

RBA: What got the event started?

Michael: There is a long history of people cycling across America going back a century. There was even a Guinness Book of World Records set for the transcontinental crossing from L.A. to New York, which John Marino broke in 1978. John did it again in 1979 and 1980, which is when I met him and took up serious cycling. In 1981 Lon Haldeman broke Marino’s record on the second half of a double transcontinental crossing from NY to LA to NY. That same year John Howard won the Ironman triathlon and set his sights on breaking Haldeman’s record, and I had ridden from Seattle to San Diego, 1305 miles in 4 days, 14 hours, and I was also interested in trying to break the transcontinental record, so the four of us decided that we would race one another across the country. Marino’s agent Jerry Kushnick landed ABC’s Wide World of Sports, who filmed the race (and won an Emmy for best sports programming) and Bud Light to help pay for it. We had so much interest after the television coverage that we decided to do another race in 1983 and the rest is history. 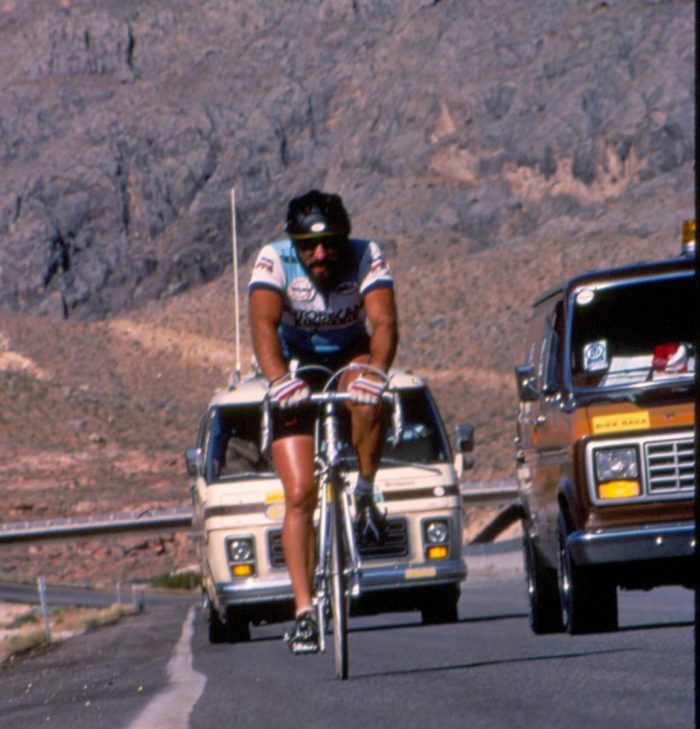 RBA: Who in their right mind would attempt such a challenge…. how would you describe the character traits of the four amigos?

Michael: Young, ambitious, single-minded, and in search of the ultimate challenge. John and Lon had already broken the transcontinental record, John Howard had won the Ironman Triathlon and was a legendary road cyclist with three Olympics under his belt, and I had ridden from Seattle to San Diego twice, so that set the stage for a showdown race between the four of us.
Remember this was the inchoate stages of ultra-endurance sports, which were just taking off with the Ironman Triathlon in Hawaii and the Iditarod Dog Sled Race in Alaska being prominent examples that the media were interested in covering as unusual athletic competitions. So RAAM fit perfectly into that zeitgeist. ABC’s Wide World of Sports was branching out beyond boxing, gymnastics, and assorted ball sports. Bob Iger, now the CEO of the entire Disney/ABC corporation, was new on the job at ABC sports and he saw in the four of us the characteristics they were looking to cover for Wide World of Sports inasmuch as we were non-traditional athletes, so he purchased the rights to cover the race, which they did for five straight years.

RBA: Was any one state harder to get through than the others?

Michael: Kansas. Flat and windy and boring. If you’ve seen one grain silo you’ve seen them all. It was deja vu for 400 miles. Arizona and Colorado, while extremely hilly with long steep grinding climbs, were actually easier on the motivation because there was something to do that was challenging and beautiful.

RBA: Can you tell us something about the bike you rode?

Michael: I was sponsored by Motobecane and they fixed me up with a super cool Vitus aluminum frame. I had a 52/42 in the front and an 11-25 on the back. I have 175 cranks and went through two chains and half a dozen tires.

“I read about some guy who went 11 days without sleep in a UCLA sleep lab so I figured I could do it. Big mistake. About 1800 miles into the race I started hallucinating that I was being abducted by aliens.”

RBA: Jumping forward, what has been the biggest notable leap in bike technology for you?

Michael: Carbon fiber frames for sure have been a game changer, and because of market competition now everyone I see on the road has the equivalent of a Tour de France bike. I now ride a Canyon Aeroad with Shimano Dura Ace components. I picked the bike up when I was in Germany courting my sweetheart Jennifer, who is now my wife. We even went to Köblenz to visit the Canyon factory, which is a phenomenal place, even more elegant than an Apple store.

RBA: Describe how the “Shermer Neck” condition came about & how it was dealt with.

Michael: In the 1983 race I was in 2nd place behind Lon Haldeman and really pushing hard to try to catch him before we got to his home town in Harvard, Illinois, where the whole town turned out to greet him. They also came out and gave me a great reception, but by then, as I was riding through Illinois I suddenly had a hard time holding my head up. It came over me rather suddenly. I took a break but it returned shortly thereafter. I had a great massage therapist who worked on my neck but there was really nothing she could do. I tried holding my head up with one hand but that slowed my speed considerably.
When I got to Ohio I was miserable and riding dangerously so we decided it was best to DNF and come back the next year. Shermer’s Neck is now an official medical malady and a good number of RAAM riders get it every year, although a number of them are able to continue with various contrivances to hold their heads up. Whatever it takes, RAAMers are tough athletes!

RBA: What was your diet like and did it evolve over time for the events?

Michael: The first race in 1982 I was on a super-healthy vegan liquid diet that lasted until around Flagstaff, Arizona, at which point my body was craving meat so I stopped and had a big juicy steak and felt much better, and from then on it was mostly a “seafood” diet: you see it, you eat it. I mostly ate on the bike, and during the miserably hot summer days I would treat myself with a Dairy Queen Blizzard. So good! I could down several of them if my crew allowed me to. I was burning about 10,000 calories a day, and at that rate you can eat just about anything.

Michael: After finishing 3rd in the 1982 RAAM I set out in the 1983 race to try to ride nonstop across the country with no sleep. I read about some guy who went 11 days without sleep in a UCLA sleep lab so I figured I could do it. Big mistake. About 1800 miles into the race I started hallucinating that I was being abducted by aliens. I’ve written about this in my psychology writings and you can even see a clip from ABC’s Wide World of Sports when I’m crossing the Mississippi River and Eric Heiden was interviewing me from the ABC film truck while I’m telling him about the aliens:

RBA: In the last few decades it’s probably within reason that you’ve ridden hundreds of thousands of miles. What is it about the bicycle that is such a draw for you?

Michael: I’ve been riding since the fall of 1979 when I was hired by Bicycle Dealer Showcase as a writer. I bought my first racing bike that year, a top of the line Raleigh road bike and so from then to now that’s 1,807 weeks…1807 weeks times 150-200 miles a week on average for those 37 years comes out to around 300,000 miles total. That’s just a back of the envelope calculation. I don’t keep track and I don’t log miles on Strava. I ride because I enjoy being outside, the wind in my face, the exercise, the sweating and working hard up hills, going as fast as I can down hills, the camaraderie with my cycling buddies and training partners talking politics and girls on long rides, but mostly being engaged in the world in a very visceral way. I’ve been fortunate to find a sport that I enjoy so much. 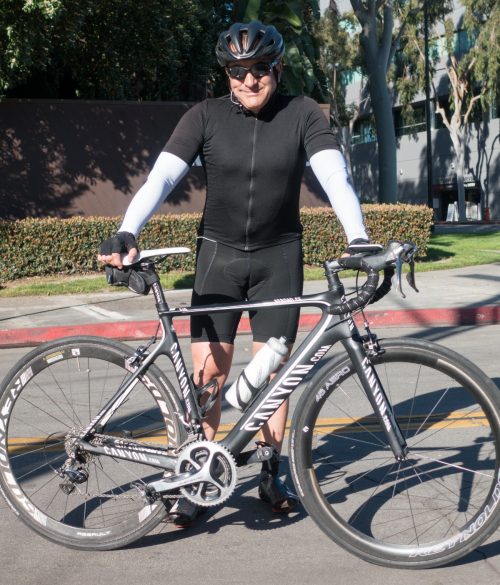