Fitness—that’s what it takes to ride a bike. The apparel company Fitter is committed to promoting an active lifestyle through their brand. Company founder Espen Kateraas is a committed cyclist himself who started the SoCal-based company in 2015 after he became disillusioned with the current cycling shoe market where he felt that too often the scales tipped towards higher prices instead of more value.

The company is based on a consumer-direct sales model, which helps keep the prices down.

Fitter’s latest savings offer comes in the form of a pre-order deal available until December 15. Included is a pair of the updated 2020 road and new off-road shoes with a free pair of socks as a bonus. 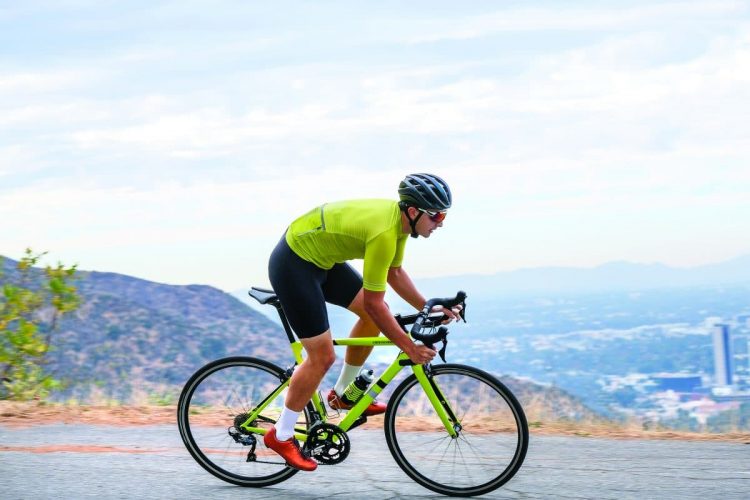 Riding the CAAD13 we immediately noticed many differences in the updated designs while others not so much. The biggest difference is the updated ride quality. While the CAAD12 and 10 were seemingly created with all-out performance in mind, the CAAD13 has an increased level of “comfort”. Meaning the ride is much smoother, more predictable and easier to control. This doesn’t mean the frame isn’t as stiff but instead of having mainly the frame absorb vibrations, the job is shifted to the 28mm Vittoria rubber and lowered SAVE (Synapse Active Vibration Elimination) seat stays. The new ride characteristics fall-in-line with the same updates applied to Cannondale’s other road frames.

Cornering and Descending on the CAAD13 is noticeably different than the CAAD12. Instead of the ultra-responsive feel of the 12, the 13 handles much more predictably giving it a more confident feel in tight and unknown corners. The 28mm tires provide increased grip over the 25mm tires on the 12 and the longer wheelbase helps the bike hold its line.

During out of the saddle efforts while climbing or sprinting, the bike feels less responsive than the previous less compliant CAADs. The semi-compact chainrings keep the gearing better suited for racers rather than beginners and the 11-30 cassette makes the climbs friendlier.

ZAP’S COLUMN: THE SCOURGE OF INSTAGRAM AND PIZZA DELIVERY

MAKING FRIENDS
As first impressions go, I guess I could’ve made a better effort, but I couldn’t. There I was hobnobbing with some frame builders in the aisles at the NAHBS show (RBA, July 2019) when I spotted my old pal Dave Mac. As an original team rider on the nascent Specialized mountain bike team back in 1985 (notable for his insistence to race with drop bars), when it comes to cycling, Mr. Mac is about as old school as it gets.

After a quick hug, I asked Dave what he was up to. In response, he nodded to the guy next to him and said he was there to help his friend promote a new Instagram account called Domestic.

“Yeah, we just want to tell the stories that nobody is telling—and sell some T-shirts.” The knife couldn’t have run deeper. It was as if Dave reached around and pushed my livid button. No different perhaps than when an established restaurant owner hears how a recently arrived food truck sitting curbside is going to start providing some good food to the locals (and sell T-shirts), I looked over at the guy and, in the friendliest way possible, simply unloaded.

“What do you mean tell stories that nobody is telling? Where have you been for the last 10 years? Twenty years? How many late hours have you spent on the phone going over the personal stories of so many of these frame builders? How many notepads have you filled with curious quotes and their personal dramas of joining tubes or standing in a spray booth? And scrolling through Instagram—are you kidding me?!”

Within a few moments I caught myself and put my arm around him and tried to convince the small crowd (and myself) that “it was all good.”

THE IG THING
Instagram. Look, I get it. Digital, digital, digital. Social, social, social. It reminded me of a joke recently made at the White House Correspondents’ Dinner where it was noted that the seating hierarchy favored the cable news networks, the bloggers, the websites, IG and FB. And where were the old-school print journos located? They were busy clearing the tables. Ouch!

But as opposed to this guy walking up to a booth, taking a quick snappy with his phone, posting it, and then having it disappear with a flick of the finger, I couldn’t help but think about the solid efforts that so many journalists have been putting out for years to produce something far more lasting on the printed page.

Even as we spoke, I knew that at that very moment our own John Ker was lying on the floor making sure that he took countless shots of some chainstay just to make sure that he got it “right” so that it would look good on both the printed page and on screen.

’ROUND THE FIRE
I know all this whimpering comes across like the guy who told stories around the firepit, only to complain when people moved indoors with electricity. Like my old friend Aristotle used to say when he gathered his mates around a campfire, “It is what it is.”

The funny thing about this ode to all things digital is that whether it was the youthful bike shop owner or frame builder who proudly eschewed the printed page as if they are allergic to wood pulp, as soon as I would show them coverage that I’d given them in RBA, they would clamor for extra issues to hold on to. “Dude, that’s awesome! Can I get some extra copies? My mom would be stoked to see that!”

Well, as usual, here’s to all the moms out there!

No, really, there I was just riding along when my leisurely moment exploded as if I’d ridden over a grenade. The impact, the noise, the confusion; I literally didn’t know what hit me. Turns out that instead of some improvised explosive device, it was actually just the pizza delivery man opening his car door that blew my ride apart.

Worse, as I was splayed out on the hot pavement, some guy drove by and said I should get out of the street because traffic was building. Thanks for the concern.

Although I should’ve at least asked for a free slice from the errant delivery man in compensation, I was lucky to ride away with just a few scrapes and a very sore right side of my body. When I called my daughter Xakota afterwards to report the accident, she responded with her usual level of skeptical inquiry, “Dad, do other people get hit by a car as often as you do?!”