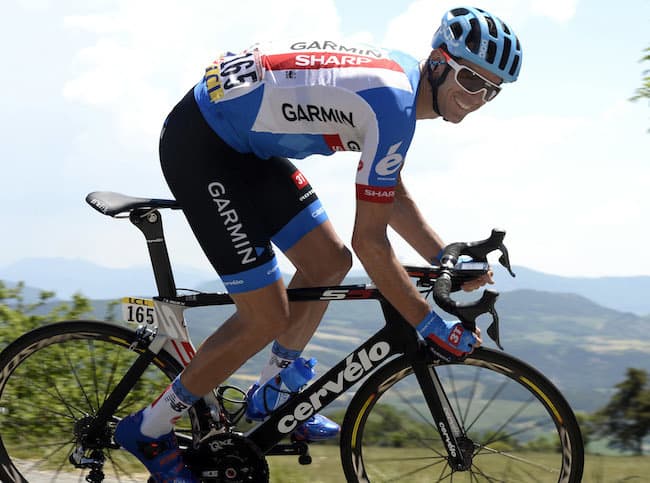 Garmin-Sharp’s David Millar won’t be racing the Tour de France this year, having been left off his team’s final roster for the 2014 edition. (Photo: Bettini)

David Millar said Monday he has been dropped by his Garmin-Sharp team for what he had hoped would be a final ride in the Tour de France before retirement. The 37 year-old Scot had been looking forward to his 13th Tour but said he would not now be on the start line in Leeds, northern England, on Saturday, with the likes of Bradley Wiggins, Peter Kennaugh, Ben Swift (all Team Sky) and Alex Dowsett (Movistar) missing out as well. Millar wrote on Twitter, @millarmind: “I was selected for TdF last week, then they pulled me last night. Wiggo, Dowsett, Pete, Swifty, fancy a city break? I hear York’s nice.” York, near Leeds, will host the start of the Tour’s second stage on July 6. In a statement, Garmin sports director Charly Wegelius said Millar, who is now expected to defend his road time trial title at next month’s Commonwealth Games in Glasgow, had missed out because he wasn’t fully fit. Millar failed to complete the British national road race championship last weekend due to a chest problem which had already seen him withdraw from Thursday’s national time trial.

However, in a subsequent tweet Millar said: “For the record, I was going to be ready for the Tour, so sad my team didn’t believe in me, after everything we’ve been through. Not cool.’ His Tour career began in spectacular style in 2000 when he won the opening time trial that saw him became only the fourth Briton to wear the leader’s yellow jersey. In 2002 he won his second Tour stage, in Beziers, and a year later saw off the likes of Lance Armstrong and Jan Ullrich to win a time trial in Nantes. But just before the start of the 2004 Tour, Millar was arrested and confessed to using the blood booster erythropoietin. Miller’s 2003 stage win was removed at his own request. He returned to the Tour after his suspension ended in 2006 and became a notable anti-doping campaigner, with Millar finishing the race every year since and adding another solo stage win in 2012.

July Is A Big Month For Bike Charity Too