Muscle Cramps: Causes and Remedies Based on Latest Science 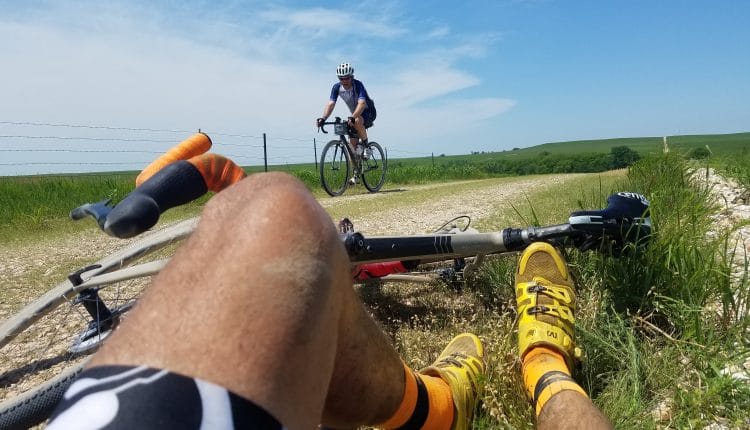 When it comes to cramping, especially exercise-associated muscle cramping (EAMC) almost everyone has a story. A story about that one time, in that one race, where that one muscle seized. Exercise-associated muscle cramps are defined as painful spasms, and involuntary contractions of skeletal muscles that occur during or immediately post exercise. So, for the purpose of this article, that would exclude cramps that occur outside of the context of exercise, or that are caused by underlying medical conditions such as nocturnal cramps, hypo/hyperthyroidism, and central or peripheral nervous system diseases such as Parkinson’s disease.

Cramping is by no means a new topic in the endurance community, and because EAMC can be debilitating in a race scenario cramping remains a hot topic. There have been decades of research dedicated to trying to figure out how we cramp, why we cramp, and how to stop cramps once they start. Despite our long affair with EAMC, we are not much closer to fully understand their etiology. If anything, our new understanding of EAMC is that they are complicated and likely stem from multiple compounding factors that make any one treatment or preventative technique unlikely to work for everyone, every time.

The Old Theories About Cramping

The advancement that has happened over the past 5 to 10 years however, is a clear move away from the original “dehydration & electrolyte imbalance theory” and an increased focus on the “altered neuromuscular control theory”. Starting in the early 2000s, study after study appeared that looked at hydration status and blood-electrolyte concentrations in endurance athletes, and over and over again there was no significant difference in the hydration status or blood-electrolyte concentrations of athletes who cramped and athletes who did not cramp on race day. Moreover, if you think about it, dehydration and electrolyte imbalances are a system-wide issue, which should cause system-wide muscle cramping. However, EAMC is most commonly localized two one or two major muscle groups and frequently occurs unilaterally. What that means is that EAMC primarily occur in asymmetry (one calf cramps). However, if muscles are cramping bilaterally (both calves) or become generalized/full body cramping, this can be tied more closely to extreme dehydration or hyponatremia, or a more serious medical condition.

What this means is that although we should not completely eliminate dehydration or electrolyte imbalances entirely from the EAMC guidebook, there is likely more going on. Most likely, hydration and fueling problems act as one of the many players that work together to lead to EAMC. 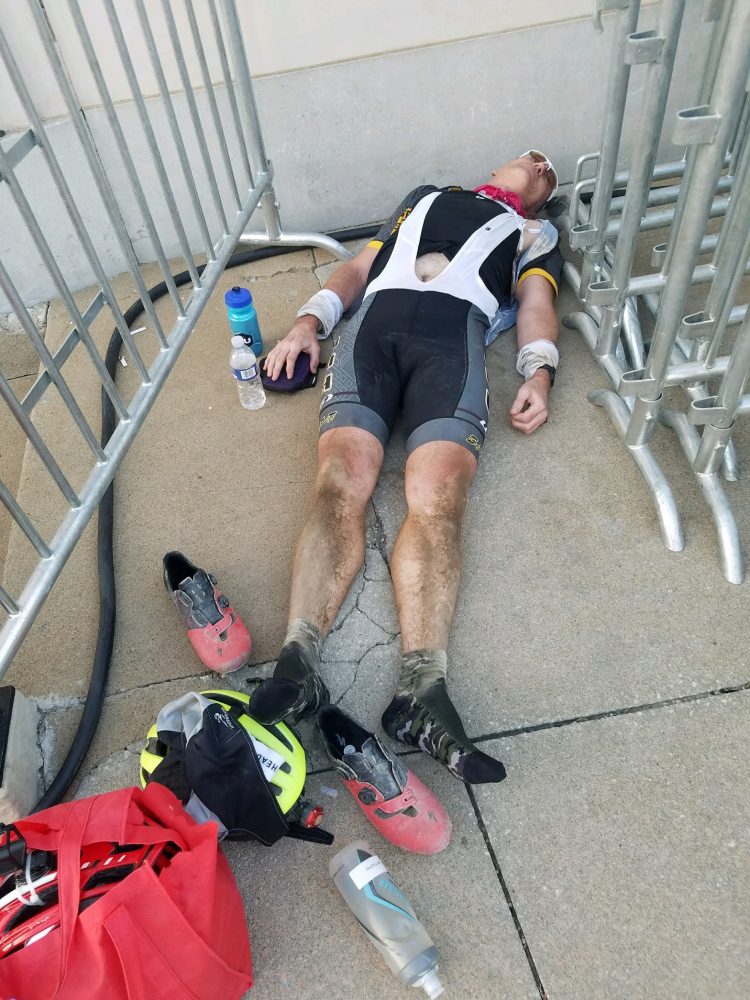 The New Theories About Cramping

The newest theory knocking at the door is the altered neuromuscular control theory. The premise of this new theory is that EAMC is most closely linked to the tenuous relationship between your nervous system and muscles contractions. This theory suggests that EAMC are a combination of several factors coalescing in a perfect (terrible) storm, overexciting your alpha motor neuron, ultimately resulting in a cramp. The variables that are seemingly most important to causing this heightened fatigued state are: inadequate conditioning (particularly for heat or altitude), muscle damage, previous injury to both the cramping muscle or in the compensating muscle group, and certain medications like albuterol, conjugated estrogen, and statins. These variables can easily build off each other, snowballing into that cramp-prone state we’ve all seen happen on race day. These factors also explain why EAMC seem to been seen more frequently at hot races where muscles fatigue more quickly at the same work load, and why athletes with a history of previous cramping are most likely to experience cramping again. This also explains why we almost always see EAMC in races and not during training because we are placing a heavier demand on our muscles than we normally do.

What Happens When A Muscle Cramps

So how exactly do cramps happen and how do we try and treat them?

When alph motor neurons and GTOs are both functioning properly, the GTOs act as the inhibitor to muscle spindle contractions. Basically, your alpha motor neurons and muscle spindles are the active “Contract! Contract! Contract!!!” command and action, while the GTOs are the inhibition to the contraction and allow the muscle to relax. As our muscles fatigue, there is an increased firing from the muscle spindles to keep “Contracting-contracting-contracting!!!” while, at the same time, there is a decreased response from the muscle GTOs to relax. When both of these things happen, we get an over excited alpha motor neuron that causes the contraction to win out time and time again, resulting in a contraction that won’t stop or, as we’ve all experienced, a cramp.

What Muscles Are Prone To Cramping

Muscles that are most likely to experience EAMC are muscles that are contracting in a shortened position. This is particularly true of muscles that cross two joints including your muscles that make up your hamstrings, quadriceps, calves, your biceps brachii, and the long head of your triceps. EAMC are not limited to biarticulated muscles but they are the most common locations of cramping in runners, swimmers, and cyclists. Part of the reason for this is that when muscles have to contract in a shortened position, or through a small arc of movement, your GTOs produce less inhibition to the contraction than normal, due to altered muscle tensions. This can be made worse if you have an injury or an imbalance that causes you to decrease your normal range of motion.

The beauty of this knowledge is that one of the ways to stop EAMC once they’ve started is to stop and give your muscles the opportunity to lengthen. You can do this by stopping and passively stretching the muscle or by moving that muscle through its full range of motion. What you accomplish by doing this is creating a change in tension in the muscle, thereby increasing the GTOs’ inhibitory input to the alpha motor neuron and relaxing the muscle.

So why do people drink pickle juice?

Pickle juice appears to be more than folklore when it comes to stopping EAMC in their tracks. In a now famous 2010 study, researcher Kevin Miller and his colleagues brought pickle juice mainstream. For decades, athletic trainers and coaches had anecdotally been prescribing pickle juice, apple-cider vinegar, and mustard to treat EAMC, but there had been no concrete evidence as to why these various concoctions were stopping cramps. Playing into the electrolyte and dehydration theory, it was initially believed that the sodium in pickle juice was aiding in correcting an electrolyte balance in the cramping athletes. However, the result was happening so rapidly (30 seconds) it was deemed unlikely that the small amount of pickle juice ingested could possibly alter the athlete’s blood sodium concentrations in that short timeframe. What the scientific community began to conclude was that something in the pickle juice was abating the cramps via another mechanism. A new idea emerged that a neural reflex in the mouth, oropharynx, or esophagus could quickly disrupt the alpha motor neuron, stopping a cramp. This discovery has led to the development of several new anti-cramping products.

This new area of research (and the associated sports products) is based on stimulating transient receptor potential (TRP) channels. TRP channels are ion channels in the body that help mediate a variety of different sensations including pain, tastes, hot, cold, and pressure. Many TRP channels that help us differentiate temperatures are also activated by various molecules found in spices, such as capsaicin (chili peppers), menthol (mint), cinnamaldehye (cinnamon), shogaol (ginger), and allyl isothiocyanate (wasabi). Two channels of particular interest to researchers in this are the TRPA1 and TRPV1 channels that are found in our mouth, oropharynx, esophagus, and stomach. Given how fast the acetic acid in pickle-juice works to abate a cramp, it is very likely it stimulates TRP channels above the stomach, which makes this a particularly interesting way to address cramps once they start.

What this means is that strong sensory stimuli activated at these specific TRP channels, by a TRP agonist, or activators for each channel, like capsaicin, could potentially cause the alpha motor neurons to become less excited, which would in turn diminish or stave off a cramp (16). There are two possible scenarios being considered by researchers and companies cashing in on this new theory: 1) pre-ingestion of a TRP agonist might increase the threshold one has to reach in order to cramp, thereby keeping the individual out of a cramp prone state longer, and 2) ingestion of a TRP agonist at onset of a cramp will “trip” our electrical wiring, causing our muscle spindles and GTOs to work in harmony once again by decreasing the excitability of our alpha motor neurons.

What You Can Do About Cramping Today

So what does this mean for us right now? What the literature is currently telling us is that, although there is not yet strong evidence to support the idea that ingesting a TRP agonist pre-activity will successfully stave off a cramp, there is fairly strong evidence that ingesting a TRP agonist at the onset of cramping is likely to help abate the cramp and temporarily prevent subsequent cramps from occurring. I would add that at this time more research needs to be conducted on the most researched TRP agonist, HotShot, and other products containing TRP agonists like mustard, apple-cider vinegar, menthol etc. We are just at the beginning stages of understanding the complexities of TRP channels, the electrical component of EAMC, and their physiological intricacies.

So what can you do right now?

Bernal Poised to Shine at the Tour

How to Overcome “Bad Day Syndrome”