Two of the best take it to the line 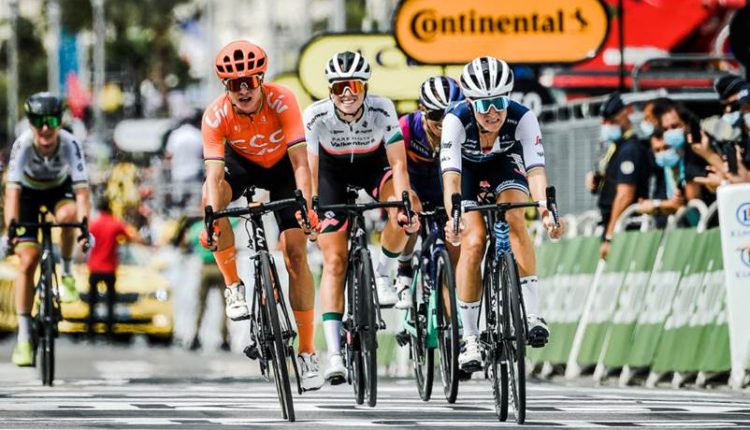 Six in the lead

The initial ascent of Cote de Rimiez started to skim the peloton as the pace was high until the top, where Luxembourg’s Christine Majerus (Boels Dolmans) led the way and collected three points in the KOM classification.

Former world and European champion Maria Bastianelli (Ale BTC Ljubjana) of Italy was among the first riders to call it quits while Spain’s Sheyla Guttierez, the Movistar leader, was unable to keep in touch with the front of the bunch, led by most of the favourites.

In Aspremont, at the top of the long 16-km climbing stretch, the pack had lost nearly half of the 137 riders at the start.

The technical descent to Nice split the peloton even more, as rain started to pour, and a group emerged, including Elsa Longo-Borghini (Trek-Segafredo), Chistine Majerus, Katarzyna Niewiadoma (Canyon), Lotte Kopecky (Lotto Soudal), Cecile Ludwig (FDJ-Nouvelle Aquitaine) and Anna Henderson (Sunweb). The six briefly led the chase by 40 seconds before the regrouped main bunch caught them in the outskirts of Nice.

At the start of the second ascent, Annemiek van Vleuten decided to take the reins and raised the pace significantly. Lizzie Deignan was the first to take her wheel, followed by her Trek Segafredo team-mate Longo-Borghini, Marianne Vos, Niewiadoma and Dane Demi Vollering (Parkhotel Valkenburg). The six held a minute’s lead at the top of the climb and 1:20 in Aspremont. Deignan tried to attack early in the descent as Van Vleuten stayed at the back and Niewiadoma led the way downhill, as she had done in the first lap, followed by Vos and Deignan.

At the bottom of the climb, the six led the pack by 1:30 and were left to battle it out for victory.

With three current or former world champions in the break, the finale was an exciting one even if the slight headwind made it difficult for van Vleuten to surge and avoid a sprint finish. She tried to with 2 km left but was reeled in. Longo Borghini also tried her luck but she was also brought back by Vos. A last attempt by the Dutch world champion under the red flame was also quashed. Vos counter-attacked and looked set for victory but Deignan timed her sprint to perfection to beat her on the line. The Briton had previously finished second in La Course in 2017 while both Vos and van Vleuten had won the race twice before and were denied a treble.

Lizzie Deignan: “I’m really relieved that I won it. What a great overall performance by the team. Every one of my team-mates did a great job today. This is phenomenal because sometimes when you train hard and you don’t win you get frustrated and then when it comes at last, you’re really relieved. The period is pretty good for me. It’s pretty special because I’m close to home and I can’t wait to talk to my husband my daughter on the phone.”