Take a look at what stood out this past week 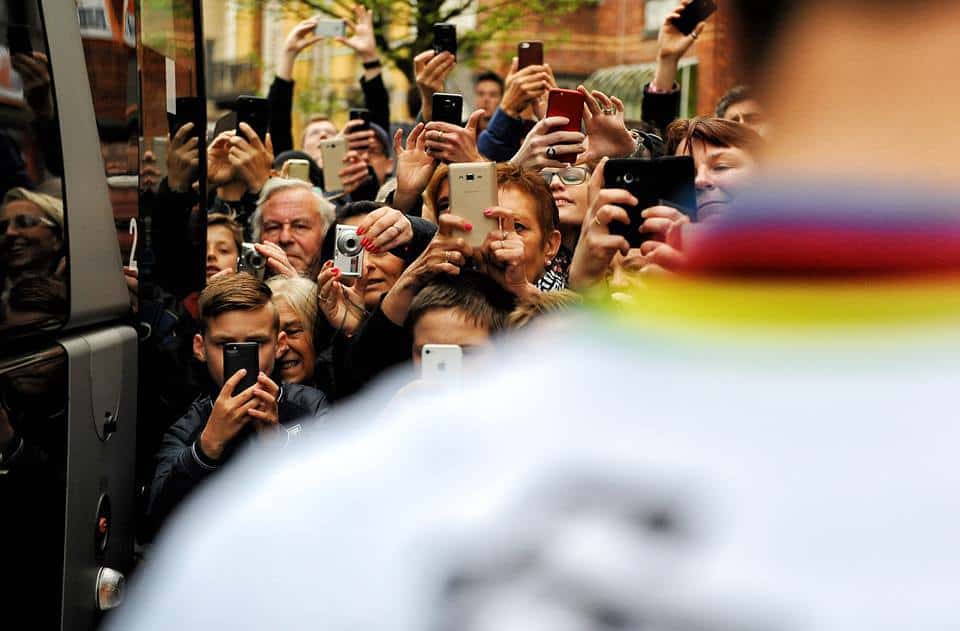 With 2017 now in our rear view and onto a new year we put together our 10 favorite photos of Peter Sagan courteous of VeloImages. Peter made history with his third straight World title, an early exit from the Tour de France, cracked over 100 victories and became a father. Take a look at our gallery to pick which photo was your favorite here. 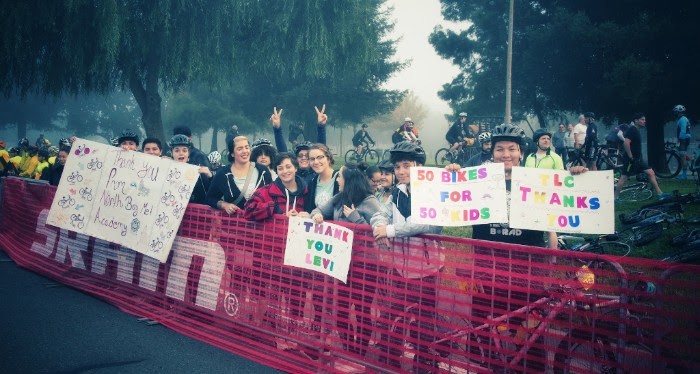 As 2017 draws to a close, I wanted to take a moment and thank all of you for the enormous help you’ve given to our (and your) communities. Because of your support through Levi’s Gran Fondo, many youth are receiving critical services this year that otherwise would not have been available. With your contributions, in the wake of the Northern California wildfires, you have helped repair our community and provided a helping hand to those who have lost so much. Your kindness is touching. Thank you so much. – Levi

Participants at this year’s Levi’s Gran Fondo had a huge fundraising year which supported more organizations and more kids. The Foundation’s support spanned 15 non-profits all across the country with the bulk of funding going to our long-time partners at the Forget Me Not Farm and the B-Rad Foundation. In addition, like last year, we hand-delivered 50 brand new bikes, helmets and locks to kids in need. Some told us that this was not only their first bike, but the first brand-new thing they have ever owned. Many of the kids say they’ll be riding the Fondo next year!

We feel so fortunate to have such a wonderful and amazing group of supporters. You are helping make a difference. While we have made a dent, we feel there is still so much work to do and we can use your continued support. Please consider the King Ridge Foundation in your Holiday/end of the year giving. We can accept both financial contributions and stock donations.

We look forward to seeing you next year at the 10th anniversary of Levi’s Gran Fondo.  Th best rates in the history of the ride have been extended for another month. Be sure to register before February 1st.
Registration can be found here. 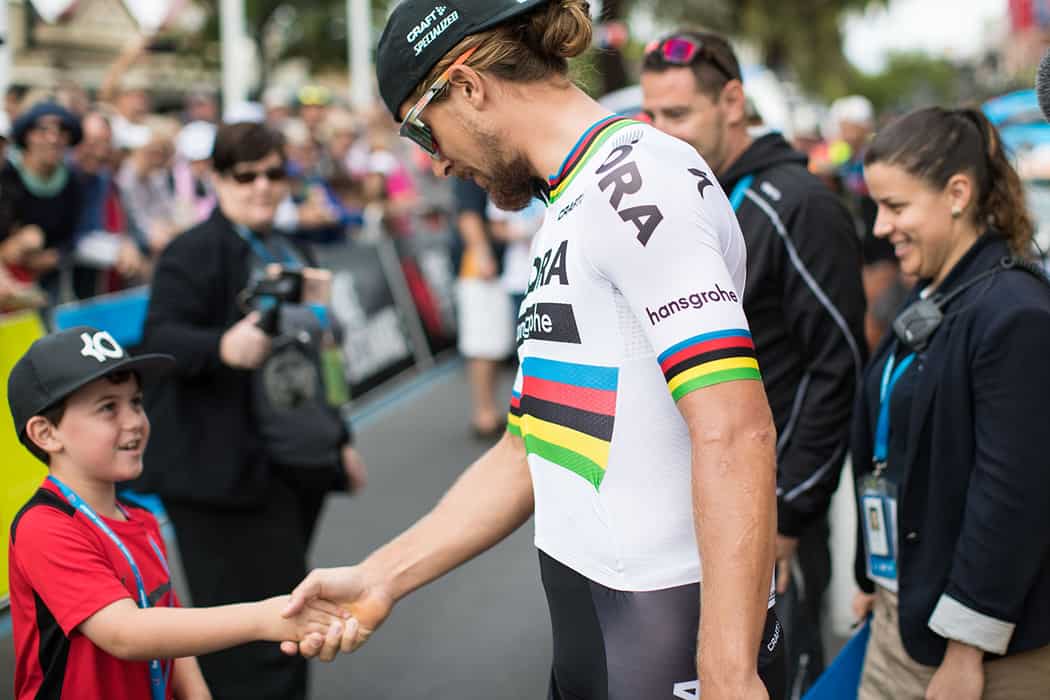 The TDU Junior Starter Kit is offering the opportunity for kids (up to 15 years of age) to learn about the TDU and South Australia by completing the ‘Sagan Says’ activities! Throughout the starter pack, Peter Sagan will pop up with some great activities including design a jersey, draw a bike and many more – all designed to see how creative they can be and test their knowledge over the summer holidays. Completed activities/artwork just need to be shared with the Santos Tour Down Under community through Facebook, Instagram or Twitter using either of the hashtags #MyTDU or #SaganSays.

The applicant with the most outstanding work will be chosen to meet Peter Sagan himself over breakfast at the Hilton Adelaide and take a couple of photos with him before he prepares for the final stage of the Santos Tour Down Under on Sunday 21 January 2018. The winner will be drawn at random from the work received by 5:00 pm on Friday 12 January 2018 and correctly using either of the hashtags  #MyTDU or #SaganSays. 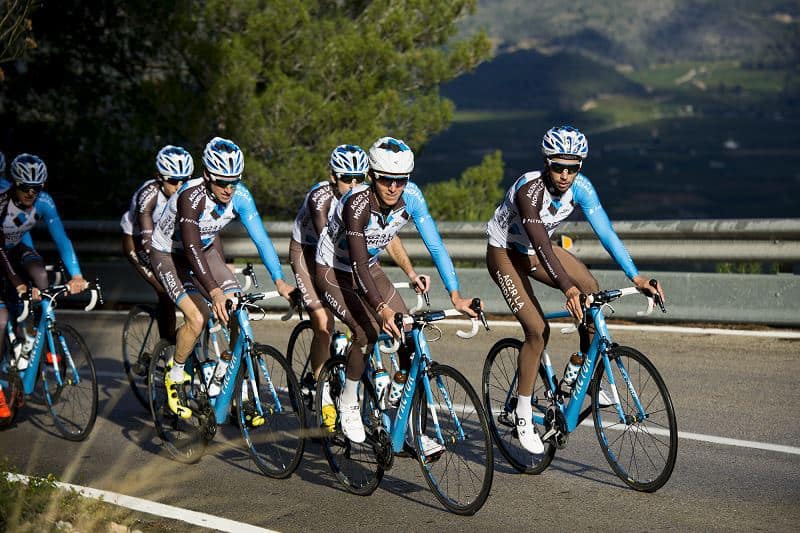 French team Ag2r La Mondiale will return to Adelaide next month for its 20th appearance at the Santos Tour Down Under in 2018 – the only team to have competed in every event since the inaugural race in 1999. The team has produced four overall event winners, as well as taking out the Winning Team Classification twice.

“Once again we expect Ag2r La Mondiale to be very competitive. We all know their history at our race, producing the most Santos Tour Down Under overall winners, with Gilles Maignan in 2000, Mikel Astarloza in 2003, Australia’s Simon Gerrans in 2006 and most recently Martin Elmiger in 2007,” he said.

“The team sets solid foundations with their riders – I mean, you only have to look at the success Simon Gerrans has had since his first win in Adelaide. He’s the only rider to have won the Santos Tour Down Under four times.” says Race Director, Mike Turtur. 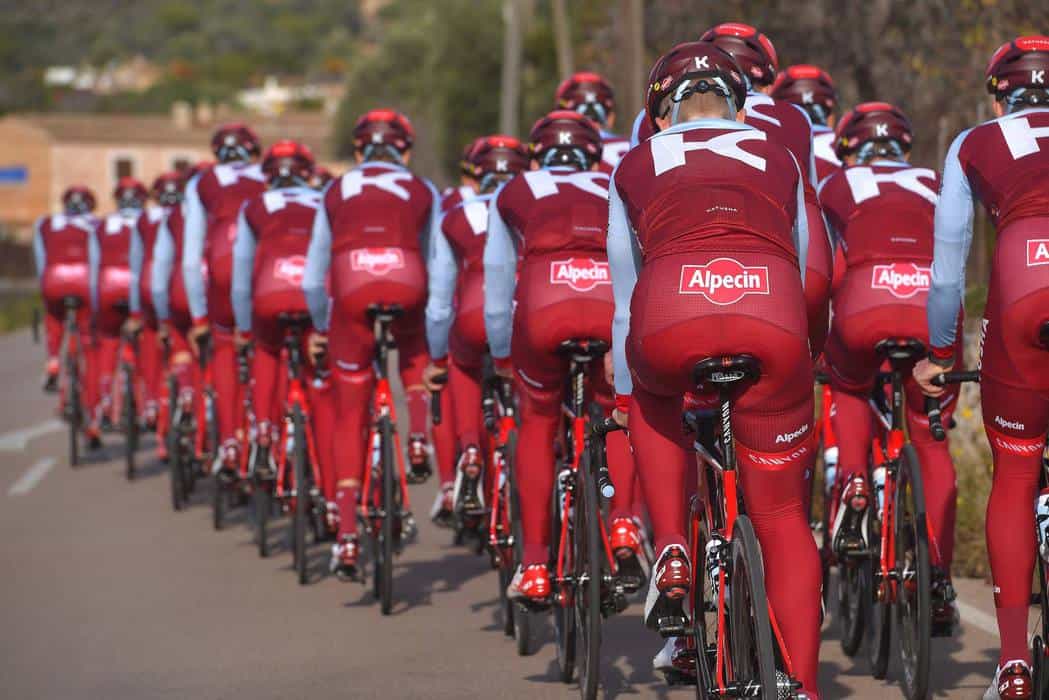 Australian rider Nathan Haas will make his racing debut with Team Katusha-Alpecin at the Santo Tour Down Under.

“Every year it seems more and more of the riders are fighting to be at the season opener, so for me, I’m lucky, everybody wants to be at my home race! said Nathan Haas. “It’s seriously getting better, bigger and faster every year. The course for 2018 I believe is going to show off the big fight between the Australian punchy riders. I predict a big showdown in Stirling. Bring on January!”

Race Director, Mike Turtur is looking forward to seeing the combination of Tiago Machado and Nathan Haas now on the same team and any GC aspirations with their history having them both finish in the top ten in 2017, 2014 and 2012. “Haas has finished fourth overall at the 2017 race and fifth overall in 2014. Machado finished third overall at 2012 race so it will be interesting to see their results in 2018,” said Mike Turtur. 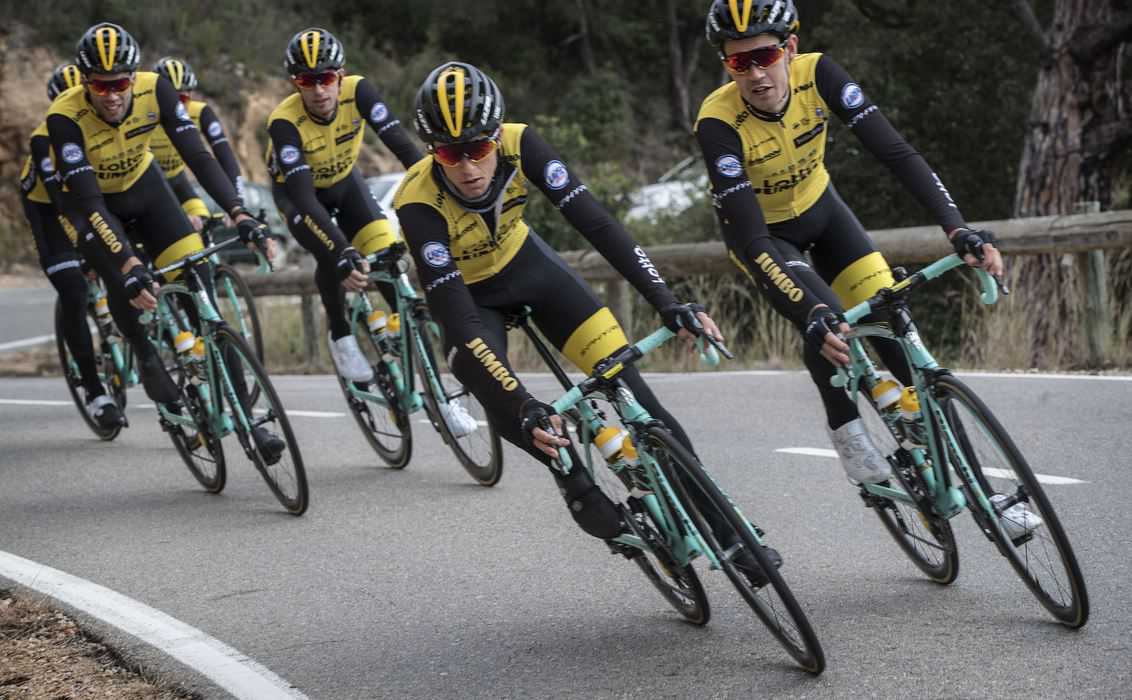 Race Director, Mike Turtur is happy to see Gesnik back racing and of course at the Santos Tour Down Under. “Gesink has had two top ten general classification results at the TDU, eighth in 2017 and sixth in 2014 so it will be interesting to see what his return to racing will deliver in terms of GC aspirations and results,” said Mike Turtur.

Gesink’s record is substantial with top 10 finishes at UCI WorldTour events globally. Most recently he finished seventh at Giro di Lombardia (2016), sixth overall at Tour de France and fifth at the Tour of California (both in 2015). He has previously won overall the Tour of California (2012) and Tour of Oman (2011). New Zealander George Bennett is set to race after he was forced out of the TDU race in 2017 due to glandular fever. 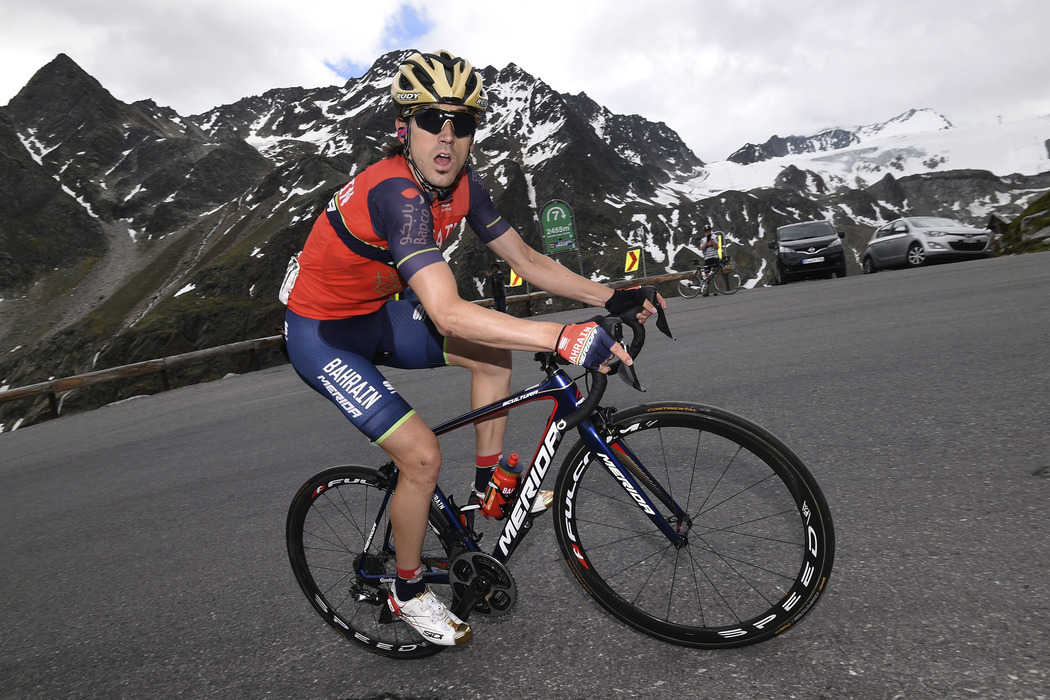 The Bahrain Merida team is ready for their first challenge of the cycling season at the 2018 Santos Tour Down Under, striving for glory over the six days of racing.

Race Director, Mike Turtur is looking forward to welcoming back to the race Domenico Pozzovivo who will make his debut with the team (previously riding with Ag2r La Mondiale) at the race as well as the Izagirre brothers.

“We expect the team to be very competitive and Possovivo is no stranger to the race, finishing seventh in the General Classification in 2016,” said Mike Turtur. “Domenico and the Izagirre brothers will share the leadership. Ion has been recovering well after Tour de France. Gorka finished 8th in GC in 2015. Domenico joined both of the training camps and showed his great personality. I look forward to seeing him again on the road. We hope all 3 riders finish at top 10,” said Tristan Hoffman.

Domenico Pozzovivo has ridden the TDU multiple times and is always happy to start his season at the race. Ion Izagirre has great expectations at the Santos Tour Down Under with his main goal being able to recover the feeling he has prior to his crash at the Tour de France, taking confidence back in the peloton. 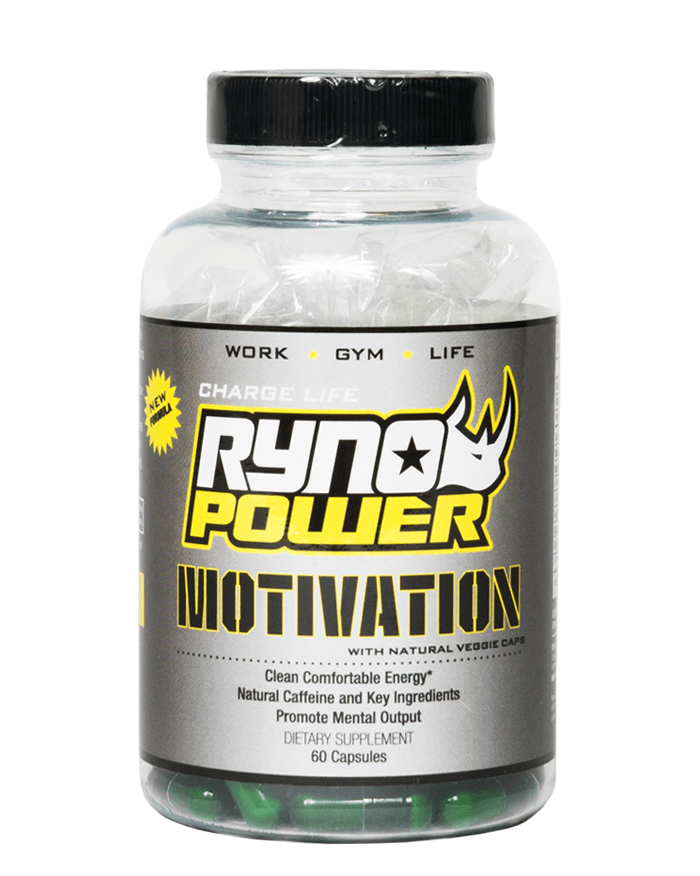 Motivation enhances mental and physical performance. It is made with a safe and effective synergy of energizing ingredients and is great to keep pace for hours without mental fatigue. Tyrosine is a rare ingredient we used that is shown to improve performance under stressful conditions. The Guarana Seed Extract is released slowly over as long as four hours to give you sustained energy rather than the quick boost you get from coffee or energy drinks.

TWEET OF THE DAY: SAGAN AWAITS COVID RESULTS AHEAD OF GIRO