PHOTO OF THE DAY 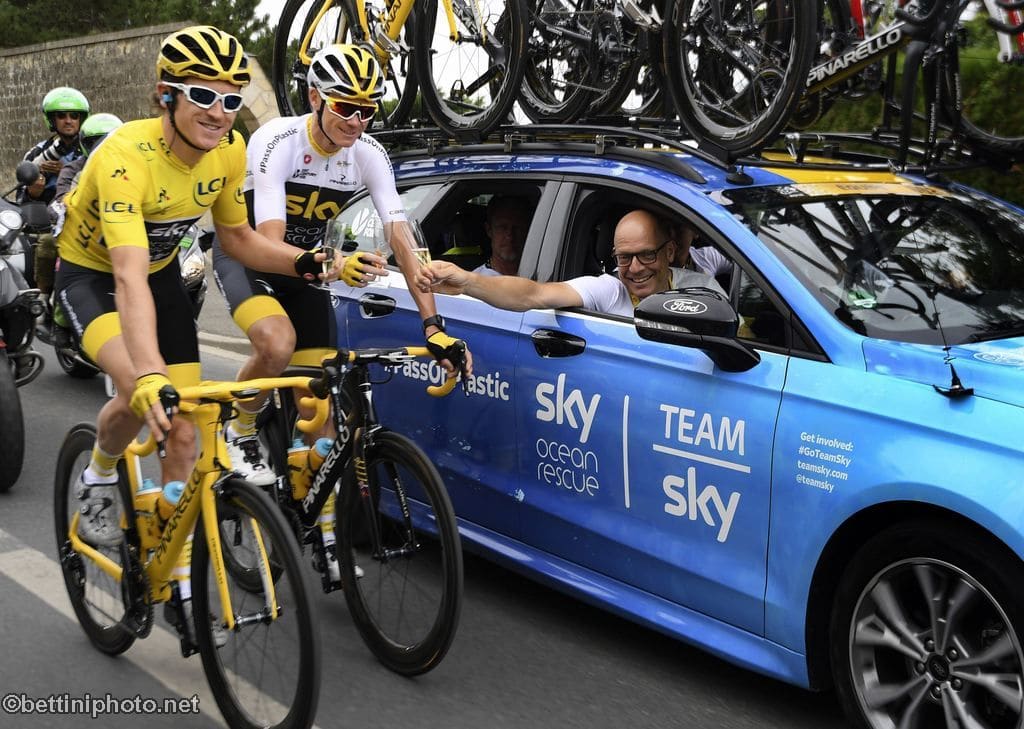 Heading into the Tour Team Sky stated they would back Geraint Thomas as a co-leader to Chris Froome. At the time Froom’es salbuterol case was still an uncertainty, and nobody knew how he would handle the Giro d’Italia which he had just won. Still though, everyone thought it would be the standard Chris Froome show. Fast forward three weeks and Thomas went riding into Paris with Froome two steps below him on the podium. Apparently Froome is human, and Thomas has added his name to TDF winners.

The current trend is aero road bikes but since Giant launched theirs (Giant Propel) last year, they invited us to Italy to preview their 2019 Defy. The Defy has been in the giant line since 2010 and this current version is very similar to the last update that was done in 2015. So why such a big release for a bike that is really just an evolutionary update to the previous model? Well while the geo charts see very small tweaks, Giant has been at work improving on the total ride experience.

To start, the overall geometry is very close to its predecessor with most sizes getting 3mm longer while a few get a bit more. The size medium we rode has a wheelbase of 99.8cm, that is 3mm longer than last year. The chainstays stayed the same length at 42cm but tire clearance has increased to up to a 32mm tire. Headtube length on sizes XS-M has increased 5mm and sizes ML-XL are unchanged. Overall these small changes are nothing more than the tweaks we would normally see. If you look at the current model (launched in 2015) there are changes throughout 2015-2018 too.

What is big news is that Giant has been working on improving their components and the biggest standout on first inspection is the stem. Similar to the Propel, the new stem on the Defy routes the cables from the bar across the top and into the junction of the top tube and headtube just behind the steer tube. This is then covered by a cosmetic cap for an integrated and clean aesthetic. We also think that this integration and a new entry for the cables is the reason for the increase in headtube length on the smaller sizes. 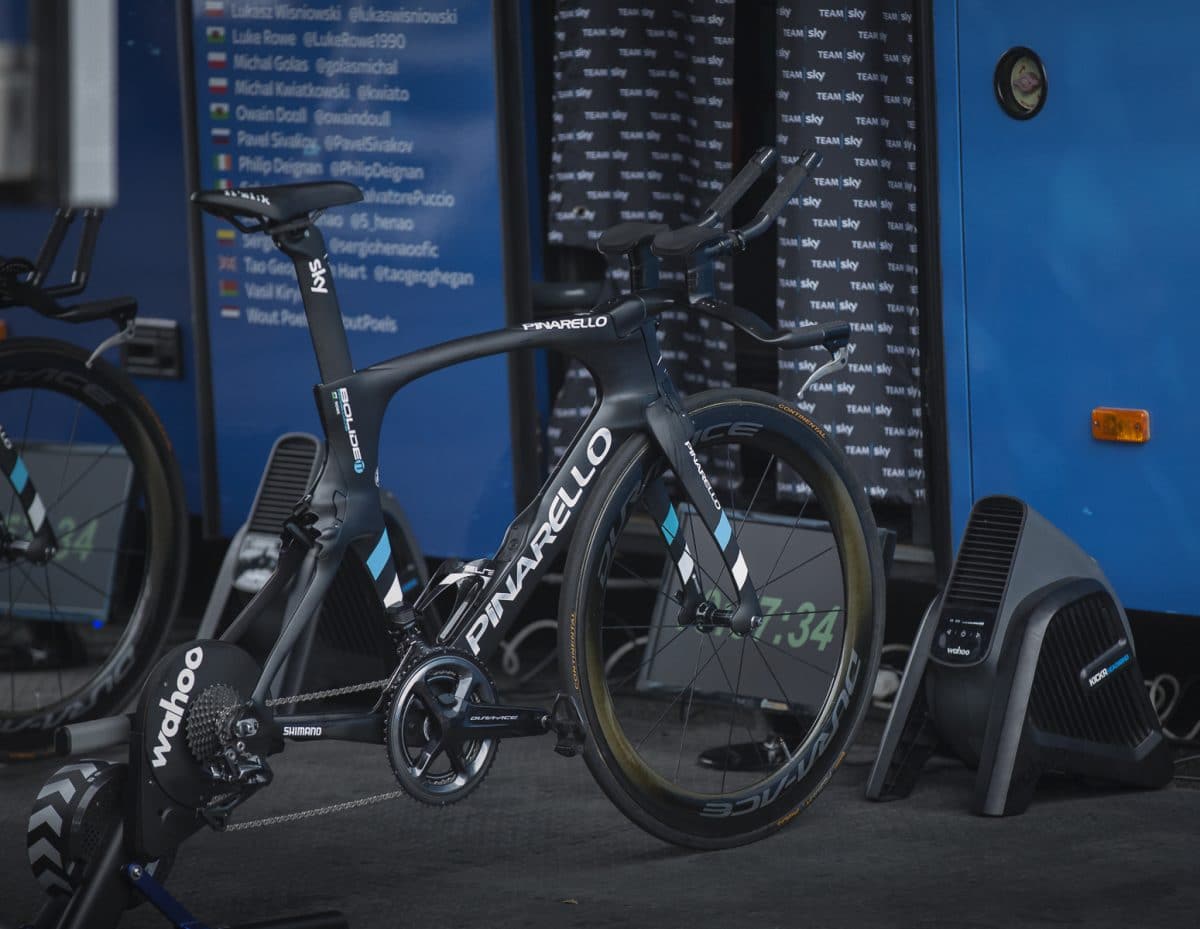 The overall victory is Thomas’ first grand tour win, and the sixth for Team Sky. In addition to the overall win, Sky also earned a third-place spot with defending champion Chris Froome. Sagan’s win in the Points Classification brings his total number of green jerseys to six. “We’re so excited for Geraint, Peter, and both of their teams,” said Wahoo Founder and CEO Chip Hawkins. “We’re very fortunate to work in partnership with some of the world’s best athletes, and we’re proud that our KICKR and ELEMENT BOLTs can be a part of the exacting strategy necessary to take wins in the world’s greatest cycling race — congratulations to all of our sponsored athletes who raced the Tour, and especially to Geraint and Peter.”

Team Sky relies on the Wahoo KICKR smart trainer and KICKR HEADWIND smart fan to warm up for races, and for indoor training leading up to Pro Tour events, while BORA-hansgrohe trains and races with the ELEMNT BOLT GPS computer, the world’s easiest to use, and most aerodynamic cycling computer. Sagan rode with a custom green BOLT to match the point leader’s jersey that he captured on stage two. 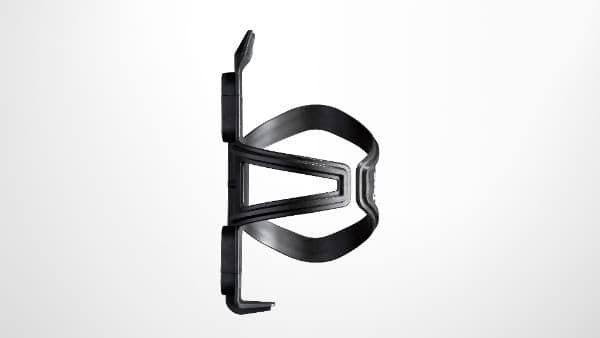 Press Release: Tacx has come up with a solution to easily place your bottle in its cage when you have a compact bike frame. On these frames, like that of a full suspension mountain bike, there is limited space to access your bottle. This makes it difficult to drink while you’re riding. That is why Tacx designed the Radar: a side load bottle cage that fits any bike.

The Tacx Radar makes it easy to insert or grab your bottle from the side, ideal for compact frames or when it’s mounted on the back of your saddle with a cage mount. Also, you can mount the cage in two ways: for left handed or right handed use. 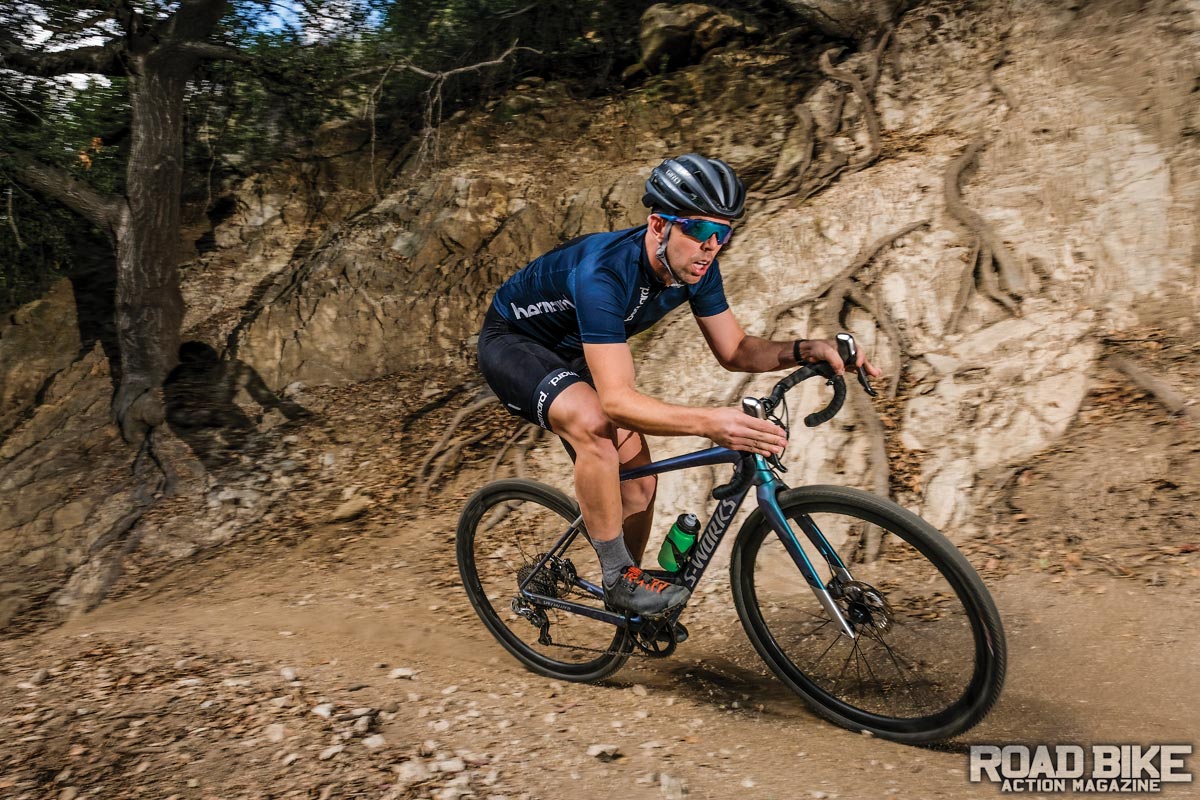 As history has proven time and again, if there is one bike brand that never ceases to miss out on the latest bike trends, it would be Specialized. When the gravel bug first began to infect the industry, we actually partnered with them in 2015 to help build a Dirty Kanza project bike. From that bike (based on a Crux cyclocross bike), Specialized has created a few new platforms of drop-bar bikes not intended for their traditional racing customer.

The Diverge has been a big project for them, and the development of this latest version has spanned over three years. The research into the off-road segment of their road category has given rise to a variety of design improvements that have even found their way into their race category too.

The new Diverge didn’t just add the Future Shock from the Roubaix and call it a day. The geometry changed, too, with a 10mm-lower 386 bottom bracket, as well as a longer (100.4cm) wheelbase. This Diverge uses Specialized’s highest-grade FACT 11r carbon for the frame, which is specific to the S-Works version and where much of the price hike lies thanks to its minimal weight-to-stiffness ratio. They also offer the rest of the carbon Diverge line with the slightly heavier FACT 9r carbon, even at $2100 for the Sport version. 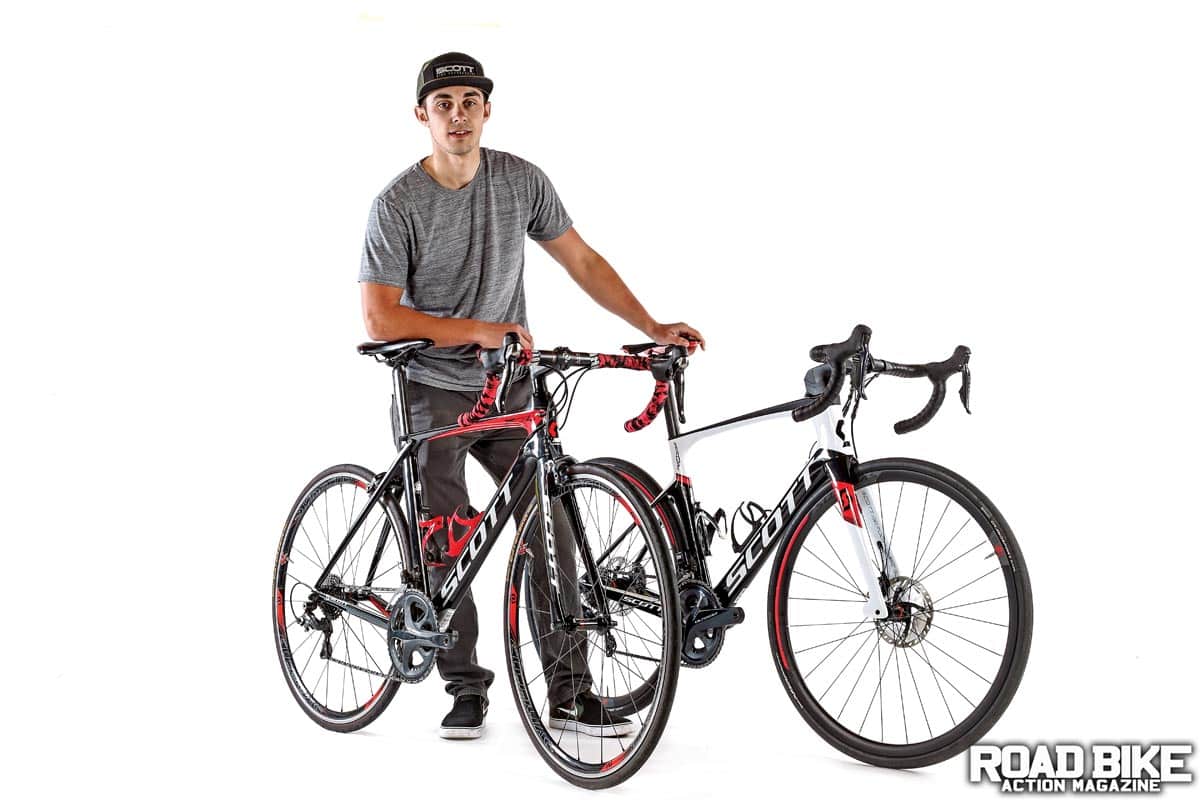 I first saw the Scott Foil when a pre-production version was rolled out during the 2010 Tour de France. It was a bike that promised all the benefits of an aero frame without compromise, and at that point, I knew I wanted one. However, there was just one problem: I was young, working two jobs and trying to earn my college degree. There was simply no room left in my wallet to find that bike a home in my garage.

A few years later, with a new job at a bike shop (and thanks to my employee purchase price), I had saved up enough cash to purchase a 2013 Scott Foil 20. The bike featured a full Ultegra mechanical build kit, along with a host of top-level Syncros parts. My new ride was a game-changer during every elbow-rubbing crit or soul-crushing century I entered. Its unique aero shape, ultra-stiff ride and race-ready geometry set this bike apart from anything else I had previously ridden.

Eventually, all my pedaling and writing would land me a job at RBA’s sister publication Mountain Bike Action,where I’ve now been pounding on the keys for the past three years. In all this time, wide handlebars, dropper seat posts and plush suspension have been my focus—until I spotted the 2018 Foil Disc sitting in RBA’s office. Before I knew it, I was “foiled” again. 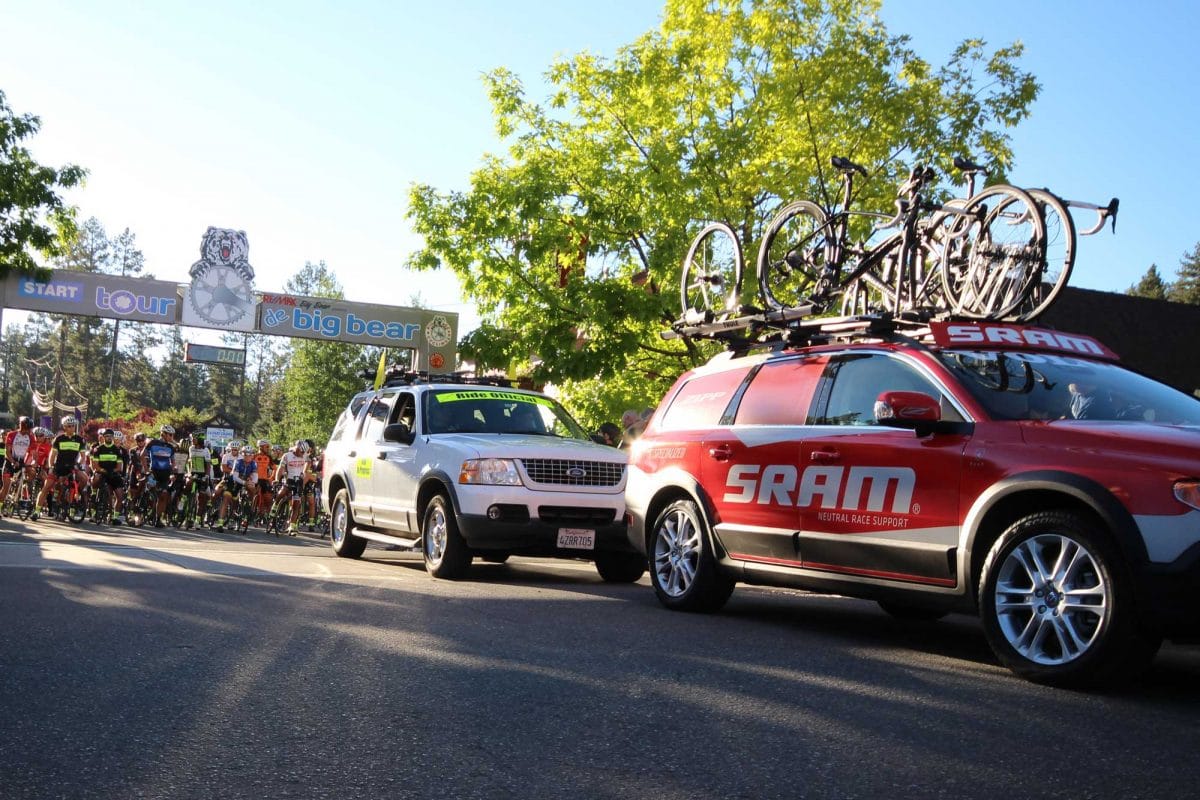 The Tour de Big Bear returns this year with a total of 11 separate cycling events on hand to choose from. From July 28th to August 5th cyclists can choose to participate in such events as the Crafts & Cranks mountain bike festival, Ride with the Pro’s (road), time trial, moderate weekly training meet ups, Road Fondo and HC event with the new gravel ride concluding the week of events on Sunday.

The addition of the SPNDX Stampede gravel event will now allow the Big Bear cycling festival to cover all aspects of cycling creating a one stop destination for cyclists from all around.

For the gravel SPNDX Stampede event rider’s will depart from the village Sunday morning at 8am for a 42 mile ride which will take them through fire roads, ridge lines, minimal pavement and even smooth single track. Rider’s will get up to 8,500 feet in elevation for a total of 4,000 feet of climbing before descending back down into the village where there will be post ride activities with vendors, music, raffles and drinks with food. The gravel ride will be limited to only 200 riders.

To find out more about the Tour de Big Bear Festival click here. 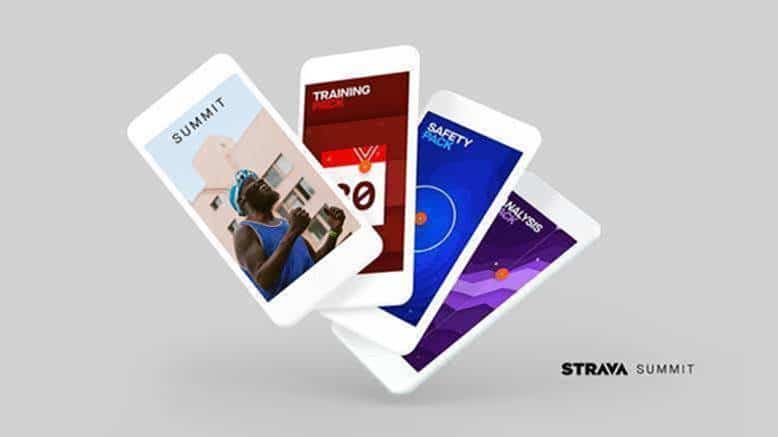 Press Release: Strava Premium will now be Summit. This change offers a much more appealing entry point for athletes, especially someone who wants to fully utilize their training watch features in Strava. There was a lot of research done on Strava’s side and while the need for customization was a common theme, these three packs really represented what people would like to pick and choose from.

The majority of athletes need the Training Pack and when they take their training a step up, or are specifically looking to improve performance, the features under the Analysis Pack became the most valuable. And since the launch of Beacon, there has been a strong request from the community to be able to access that feature standalone for its added safety impact, so now users that just need the entry Strava experience for training can access the key safety feature at the $2.99 price point.

The glass fibre compound makes it strong and gives it a weight of just 45g. Its clamping force is further increased by giving it a round shape with extra ribs, so the Tacx Radar firmly holds your bottle
Well, that’s all for this weeks Mid-Week Report. Be sure to check back every Wednesday to see the latest news, views and products that have come our way. If you have any questions, comments or requests, let us know: [email protected]

From The Archives: Valentino Campagnolo

Would You Pay More?

GET YOUR RIDE ON – MAMMOTH MOUNTAIN GRAN FONDO