Red and black for the new sponsor 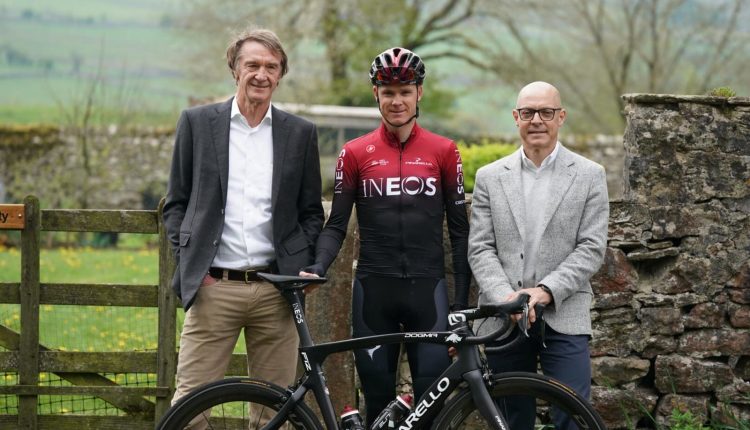 Chris Froome helped officially launch Team Ineos on Wednesday ahead of the Tour de Yorkshire as the former Team Sky plot to build on a decade of success.

Chemicals giant Ineos, founded by Britain’s richest man Jim Ratcliffe, confirmed its takeover of the British outfit in March after Sky announced it would end a ten-year commitment.

Deep-pocketed Team Sky won six Tour de France titles in the past seven years and racked up eight Grand Tour victories in total but were mired in controversy for using special exemptions to administer drugs that can enhance performance.

“This is a momentous day for the team, our fans and cycling in general,” said team principal Dave Brailsford. “We are hugely excited about the future with Ineos at the helm.”

Environmental protesters are expected to line the route of the four-day Tour de Yorkshire, beginning on Thursday, to voice their anger at Ineos’s record on fracking and plastics.

Wednesday’s press conference was held far from the public gaze in a pub in North Yorkshire.

“But when I did come to educate myself I realised there’s a very simplistic view and when you dive down into it and take the effort you can find out there’s a very different view. I’m very comfortable with the situation we’re in.”

Brailsford said that where Sky had promoted recycling campaigns, “if anybody can do anything about it, it’s these guys”.

On fracking, he said the majority of environmental groups he has met with are “ignorant” of the facts, and said it was a cheap source of energy.

Team Dimension Data rider Mark Cavendish will join Froome on the start line for the race in the north of England, hoping to battle the likes of Katusha-Alpecin’s Marcel Kittel in the anticipated sprint finishes.

Team Ineos riders at the Tour of Romandie are running a one off kit for the stage race this week. Since the race started on April 30 the team chose to use a stand alone Ineos sponsored kit instead of the old Sky colors. Geraint Thomas opened up the prologue in his time trial national champion skin suit.

The Tour is Saved, but What Does That Mean For the Rest Of The UCI Calendar?