On The Job Training: The Innkeeper Wears Lycra 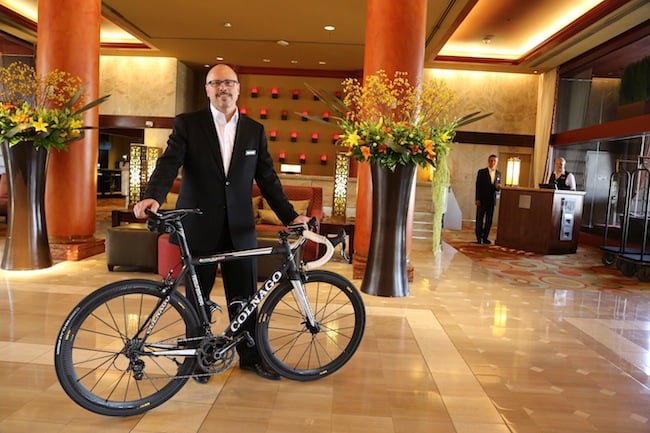 See that guy checking out the Pinarello in the corner? He’s a certifiable Italian bike freak! You’ll want to meet him.’ Telling me that was none other than another certifiable Italian bike freak, Tom Kattus, head honcho of Campagnolo North America. The man he was referring to was Murray Lowe, general manager of the Marriott Hotel in Marina Del Rey, California, who was playing host to Campy’s official North American media launch of its EPS electronic drivetrain.

As we watched Murray from across the room, he soon turned his attention away from the Pinarello demo bike on display and shifted his focus toward the rest of the room. He floated among the mass of hotel staff and event attendees, politely striking up conversations, recommending hors d’oeuvres and directing some thirsty patrons toward the open bar. When he made his way toward me, I said to him, ‘That Pinarello is pretty nice, isn’t it?’ He looked back toward the bike in the corner of the room, paused a moment, then replied, ‘Yes, but it’s no Colnago.’

CELEBRATING TWO FAMILY NAMES
RBA: Tell us about yourself and what got you interested in cycling.

Murray: I was born in Rhode Island, but I grew up in Canada. I’m turning 55 years old this year, and I’m happily married with three grown-up kids living in different parts of the country. My mom was an outstanding figure skater, and she had me skating by the age of 5. She was such a wonderful skater that it really made me learn quickly. And then, like any good Canuck, I started playing hockey, which I did for about 16 years. One of my coaches recommended cycling as a form of cross-training, and I fell in love with it. And then in high school I switched to basketball, but tore out my knee during my first year of college. Part of my rehabilitation was putting in a lot of hours on the stationary bike.

RBA: How long have you been working for Marriott Hotels?

Murray: It’s been 33 years. I started out in Stamford, Connecticut, and over the years I’ve worked in numerous positions all around the country, including Times Square in New York City and the Orlando World Center Marriott. The Orlando hotel was interesting because it’s a huge convention market. While I was there, I really got back into cycling on a regular basis. Later, I worked in Fort Lauderdale, Florida, too, but Hurricane Wilma destroyed the hotel, so I eventually moved to California and became the general manager here. That was about six years ago.

RBA: What does a day in the life of a hotel general manager consist of?

Murray: I’m lucky because I get to commute to work on my bike most days. And when I get to the hotel, my routine typically starts when I walk around the building, talk to all of the company associates, and try to determine what they need to be successful on a daily basis. This includes most everyone-from the front-office employees to the banquet staff to the maintenance department. My role is really about guidance and leadership, and I always strive to motivate and inspire the people around me. I want our associates to get excited about hosting the hotel’s guests. Marriott believes that if its employees are taken care of and given what they need, then they’ll take care of the guests, and the guests will keep coming back. It’s a simple strategy, and it’s the foundation of our company philosophy.

RBA: What’s the transition from Florida to California been like for you these past few years?

Murray: I was living in Florida for a number of years, and our usual group rides were real hammerfests. But in Florida, the biggest hill around is usually a bridge. So, everything changed when I came out to California. I had been running a 54/44 chainring combination and an 11-21 cassette, but had to switch to a compact crankset because I couldn’t climb a hill worth a darn! And, I relocated to the South Bay area of Los Angeles where there’s a great cycling community with plenty of really strong riders who race on a consistent basis.

RBA: Do you have much experience in bike racing?

Murray: I’ve done a few races here and there throughout the years, but not too much. This year I actually renewed my racing license, so I’ll probably target some fun events. I really like to ride with guys who are better than me because it makes me work that much harder. I also have used cycling to lead fundraising efforts for the ‘Children’s Miracle Network Torch Relay.’ 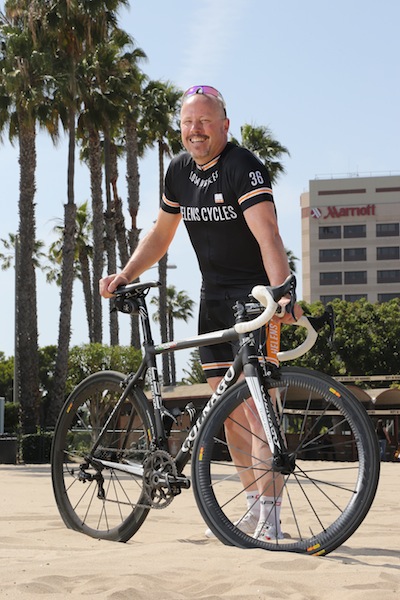 ‘My simple belief is that you must take care of yourself in order to care for others, which aligns with Marriott’s ongoing wellness initiative to support better health for all of our associates.’

RBA: Has cycling benefitted you in your daily life?

Murray: Absolutely! My simple belief is that you must take care of yourself in order to care for others, which aligns with Marriott’s ongoing wellness initiative to support better health for all of our associates. Personally, I can leave my house in Redondo Beach and ride to work, about 12 miles. Doing that prepares me emotionally to be at my best while at work. It makes me feel good, keeps me healthy, and really puts me in a good frame of mind to focus on the day’s tasks. And then, at night, I’ll ride back home. That’s my time to collect my thoughts, reorganize any of my work priorities for the following day, and transition my focus to spending quality time with my wife. On the weekends or any days off, I’m usually able to get in some longer rides with friends.

RBA: How has cycling impacted your professional life?

Murray: There’s a real sales responsibility that comes with being a GM, and we’ve actually developed a lot of new business through athletic networks. This Marriott once served as the home-base hotel for the L.A. Triathlon before they transitioned over to the new L.A. Live complex at Staples Center. And a few years ago, we were one of the official host hotels for the Qualcomm Million Dollar Challenge charity bike tour. We’ve also hosted training and product launches for brands like Campagnolo and Colnago, as well as conferences for Helen’s Cycles, Shimano, Sidi, BMC, Cannondale, Trek and Red Bull, among others. Our location in Marina Del Rey is really fantastic, too, because of its proximity to Venice Beach and our beautiful marina. So, we often get guests arriving with their bikes, ready to go for a ride.

‘I was riding a Colnago CX-1 at the time, and? I was really nervous that Ernesto would tell me something like I was on the wrong bike!’

RBA: We’ve heard about your love of Colnago bikes; can you tell us about that?

Murray: All of my bikes are Colnagos, and they all run Campagnolo components. I don’t think that there’s anything wrong with bikes or parts from other manufacturers, and there’s a lot of high-tech stuff out there that’s really cool. But, I just love the stories behind the family traditions of the two companies. It’s similar to my feelings about Marriott, which was started in 1927 and is still led by Mr. Marriott. He’s the spirit and heart of the company, and I love that he takes great pride and responsibility in his family name-after all, it’s on the building- just like Ernesto Colnago and Valentino Campagnolo. Some might call that romantic, but I just love the legacy of these companies built from humble beginnings.

RBA: You said that Colnago has hosted product launches at your hotel; have you ever met Ernesto Colnago?

Murray: Yes, I have. And over the years I’ve had the pleasure of getting to know Ernesto Colnago on a personal level. One of the things I respect so much about him is that he’s been passionate about bicycles for his entire life, and he’s truly made it his life’s work. About four years ago I had the honor of receiving a personal bike fitting from Ernesto himself. I was riding a Colnago CX-1 at the time, and I had pretty much set up the fit myself, so I was really nervous that Ernesto would tell me something like I was on the wrong bike! But, he just adjusted my cleats a bit, lowered my seatpost a small amount, and added 1cm to my stem length. It really was an extraordinary experience receiving some strange kind of validation from the maestro himself. Cycling has given me improved health and fuels my highly competitive nature. But what I value most are the lasting friendships I have made with others who share the same passion.
Michael White

TWEET OF THE DAY: FABIO JAKOBSEN IS BACK IN THE SADDLE