Outsider Cees Bol won a crash-strewn stage two of Paris-Nice on Monday as the industrious Australian Michael Matthews took the yellow jersey in his first major race for the Bike Exchange team. As a crash disrupted the finale Bol rocketed to the head of a reduced bunch sprint outpacing the 2019 world champion Mads Pedersen, while Matthews came third.

But Matthews in his first major race since leaving Sunweb in January also took bonus seconds in the intermediary sprints on both Sunday and Monday.

“I came here to try everything I could and we saw a chance with the intermediary sprints, to nick a few seconds and take the jersey” said Matthews, who has won stages on the Tour, Giro and Vuelta.

In the general classification, those bonus seconds edged him four seconds ahead of Pedersen and overnight leader Sam Bennett, who was bamboozled by the late fall and came fifth in a tight finish.

“I was in just the right place going into the final corner and that did the trick,” said the Dutch DSM rider Bol who was fastest to react to the fall.

Bennett said his placing was a disappointment.

“That’s sprinting, I felt great and was hoping for another win,” the Irishman said.

Matthews has a major task on his hands to keep the race lead on Tuesday when a 14.7km time-trial could blow the field apart.

Overall favorites Primoz Roglic and Tao Geoghegan Hart both finished with the main pack behind the crash but were awarded the same time as the winners.

Monday’s stage embarked from the tiny village of Oinville-sur-Montcient with 160 riders for an almost pancake flat 188km run.

Wind rather than hills was the difficulty of the day as the race headed south of Paris into the great, green pastures of exposed fields where the wheat and corn have not yet grown to create any shelter for the cyclists.

But the crosswinds that have so affected recent editions caused only a brief break in the pack on Monday as the peloton trudged along together most of the way to the finish line at Amily.

Kiwi George Bennett crashed into a post on a tricky village road and hit his head hard enough to break his helmet.

The Jumbo climber gathered his senses and was off on his way before the race doctor could examine him.

Faring worse was Alexis Vuillermoz of Total Direct Energie, who pulled out after another fall in which he appeared to suffer a shoulder injury.

Paris-Nice tries to roll all the challenges of a Grand Tour into eight testing stages and is an early marker of who is hot and who is not.

After Tuesday’s time-trial the climbers will be tested with three hilly stages and a mountain stage in the Nice back country. 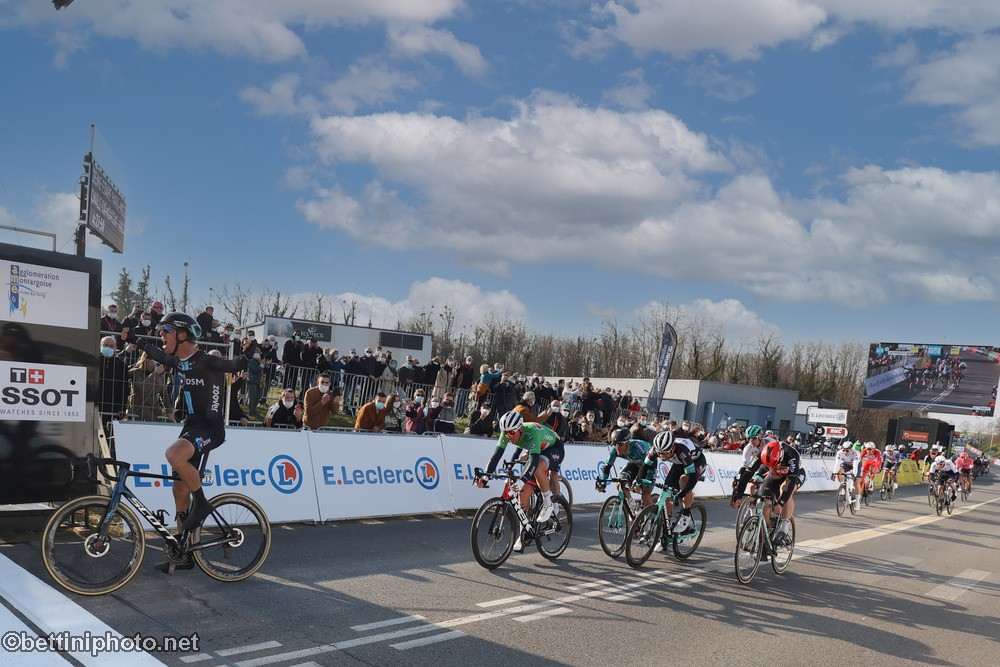