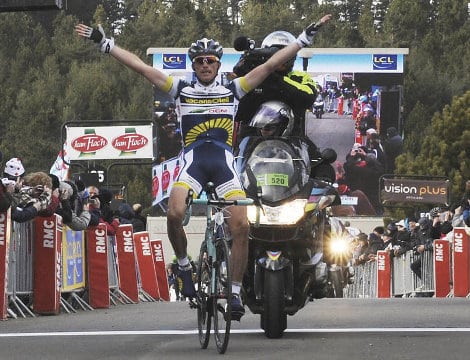 Lieuwe Westra gets another win for Bianchi and Vacansoleil.
Photo: ASO/P.Perreve

Dutchman Lieuwe Westra, dubbed the Beast, bit harder than the cold on the final climb to Mende to win the 5th stage of Paris-Nice and clinch his most prestigious victory to date. The experienced Vacansoleil rider took advantage of a surprising attack by overall leader Bradley Wiggins in the final 500 meters to counter and go all the way.

“It’s a great day in my career. Winning a stage of the Paris-Nice, it’s fantastic,” said Westra. “I wasn’t doing very well at the start of the season, but over the last few days I have been performing a lot better. I am climbing better and am lighter in weight having gone from 72 to 68 kilos over the last year. “As I am living in Spain, I can train in the mountains. I felt fine on the last climb and after the last kilometer, I decided to take my opportunity.” Westra added that he is also eyeing the winner’s yellow jersey. “Yes, of course. Perhaps it’s possible to do it. But I have no regrets, the stage today has pleased me.”

Favorite at the start, Spain’s Alejandro Valverde (MOV) had to be content with the runner-up spot ahead of Wiggins, who retained his yellow jersey. The Briton again showed great form in the finale and now leads the day’s winner by six seconds while Levi Leipheimer, who finished on his heels in Mende, is third, ten seconds off the pace. Valverde, winner of the third stage at Lac de Vassiviere, moved closer to the podium in fourth place, 18 seconds adrift.

Sky rider Wiggins said his form was affected by the conditions. “It was a terrible day with the cold,” said the Briton. “My teammates Richie Porte and Rigoberto Uran did some amazing work. Today, we probably had the toughest day. It wasn’t my kind of climb, but I worked a lot in the winter for these situations.”

It was the second victory on this Paris-Nice for Vacansoleil after the fist stage won by Gustav Larsson and the Dutch team also conquered the polka-dot jersey thanks to Frederik Veuchelen, one of the brave escapees of the day.

Gang of Four
After two kilometers, a gang of four emerged: Simon Clarke (GEC), Frederik Veuchelen (VCD), Yuyika Arashiro (EUC) and David Le Lay (SAU). The break quickly gained momentum, reaching a maximum lead of seven minutes at kilometer 41. On the Col d’Aujols (km 15.5), Veuchelen was fastest ahead of Le Lay. The gap remained stable at around six minutes for most of the next 100 kms, and Veuchelen made the best of the Cote de la Malene (1st cat, km 96) and Cote du Cayla (3rd cat, km 111.5) to collect 18 points in the mountains classification.

Tempo raises
As the pace increased, Blel Kadri (ALM) crashed badly at km 125 and was forced out. The first category Cote de l’Estrade was merciless. Several riders were dropped in the ascent as Alejandro Valverde’s Movistar team-mates raised the tempo. Kevin Seeldrayers (AST) and Laurens Ten Dam (RAB) broke with the pack to chase behind the four. At the top of l’Estrade (km 146.5), Veuchelen collected ten more points to secure the polka-dot jersey on the finish line. Movistar still led the chase in the descent.

Final climb
With 9 kms to go, Seeldrayers and Ten Dam caught the four escapees but the peloton reined them in the Cote de Chabrits (2nd cat, km 170.5). Only Veuchelen kept fighting to add seven points to his tally for the mountain classification. From the foot of the climb, Team Sky took the reins, pulling Bradley Wiggins up the climb. Under the red flame, France’s Arnold Jeannesson (FDJ) surged but, much to everybody’s surprise, Wiggins was the one to react, leaving his rivals hapless. Westra cunningly saw an opening and did not miss his chance. Six seconds behind him, Valverde managed to beat Wiggins on the line but the Briton was the one who impressed the most with two days to go before the final time trial in Col d’Eze.

Being There: In The Pits At Tirreno-Adriatico